Is it time to walk away from the big three? 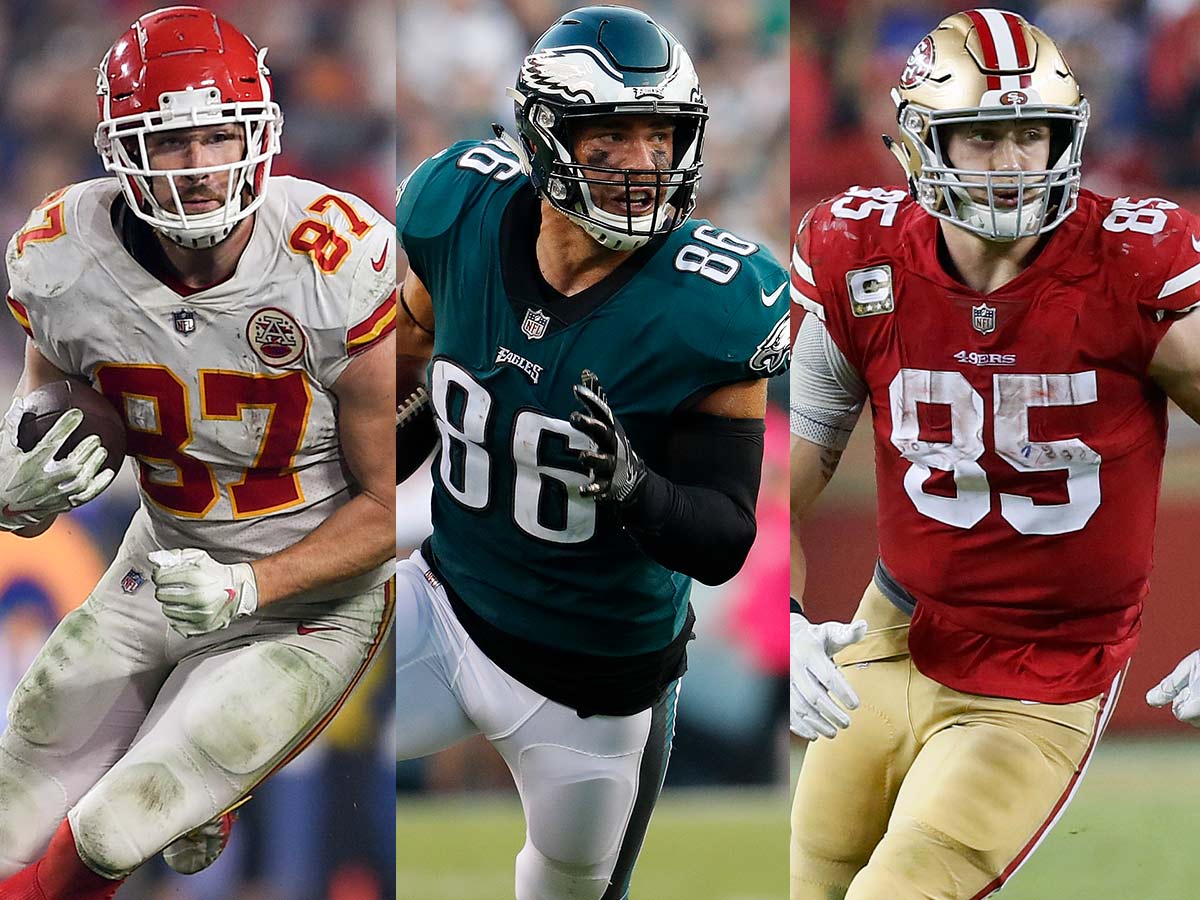 The tight end position been extremely volatile over the last two seasons. Only Travis Kelce, George Kittle, and Zach Ertz have been reliable fantasy producers. But are they still? Can we afford to dedicate early draft capital to one of these superstar tight ends? The answer is no. 2020 will be the year of Zero Tight End. Tight end fantasy production can be predicted by three metrics: athleticism, snap share, and slot usage.

It has been written and talked about at length: the tight end position is one of the toughest positions to adapt to at the professional level. Move tight ends who largely were used as receivers in college are now asked to pick up blocking assignments. And the opposite holds true to tight ends that were primarily blockers in college; they are now asked to pick up the complicated and nuanced receiving routes of the professional game. In a few words, it’s a really hard position to play.

With the volatility and complexity of the tight end position, wouldn’t it then be pertinent to lock in one of the Big Three (Kelce, Kittle, Ertz) early on in drafts to ensure productivity? Over the last two seasons, the Big Three have averaged 17.5 (Kelce), 15.95 (Kittle) and 15.85 (Ertz) fantasy points per game (FPPG). Even with this consistent production, the smart answer is still no. Each of these elite tight ends can have their production replaced by a running back at a similar startup ADP paired with a potential breakout tight end. The time to sell is now and invest in tight ends that other dynasty owners have become frustrated with through their early careers.

When analyzing 2019 ADP for each of the Big Three, each had an RB with a similar ADP. In each circumstance, that running back out-produced each of the tight ends on a per game basis. Kelce’s ADP in 2019 was 2.04. At a similar ADP, Leonard Fournette could have been drafted. He put up 17.3 FPPG to Kelce’s 15.9. At Kittle’s 2019 ADP (3.09), his production would have been eclipsed by TD machine Aaron Jones and his 19.7 FPPG to Kittle’s 15.9. Ertz’s ADP at 4.01 and his 14.2 FPPG would have easily been replaced by Derrick Henry and his 19.6 FPPG at a comparable ADP. The average per game point differential of the Big Three tight ends to the comparable running back at ADP (Fournette, Jones, Henry) was 3.23 FPPG.

This is a significant margin on a week-to-week basis and, over a season, could be the difference maker between playing for a championship or jockeying for the 1.01 in your rookie drafts. A telling stat is  looking at win rates from 2019 FFPC Best Balls. When looking at late round tight ends vs. the Big Three, teams that had a late round tight end had a higher win rate than the teams that dedicated early draft capital to one of the Big Three. I’ve focused in on 2019 breakout Austin Hooper, who proves that Zero TE is a viable strategy. On FFPC Best Ball rosters where Hooper was selected in the later rounds (allowing earlier draft capital to be spent on an elite running back or wide receiver as opposed to one of Kelce, Ertz or Kittle), Hooper rosters had an average win rate of 17% in 2019. Comparing this to teams that rostered Kelce (10%), Ertz (9%), and Kittle (9%), the Hooper teams had a clear advantage. This roster flexibility allowed for these teams to go out and invest that draft capital into higher producing running backs, giving them an advantage on a weekly basis. This same logic held true for drafters who took Mark Andrews late (17%) and Darren Waller even later (18%).

Ok, so you can replace these tight ends with an elite running back in the early rounds, but what about my tight end spot? I still need to roster one, right? 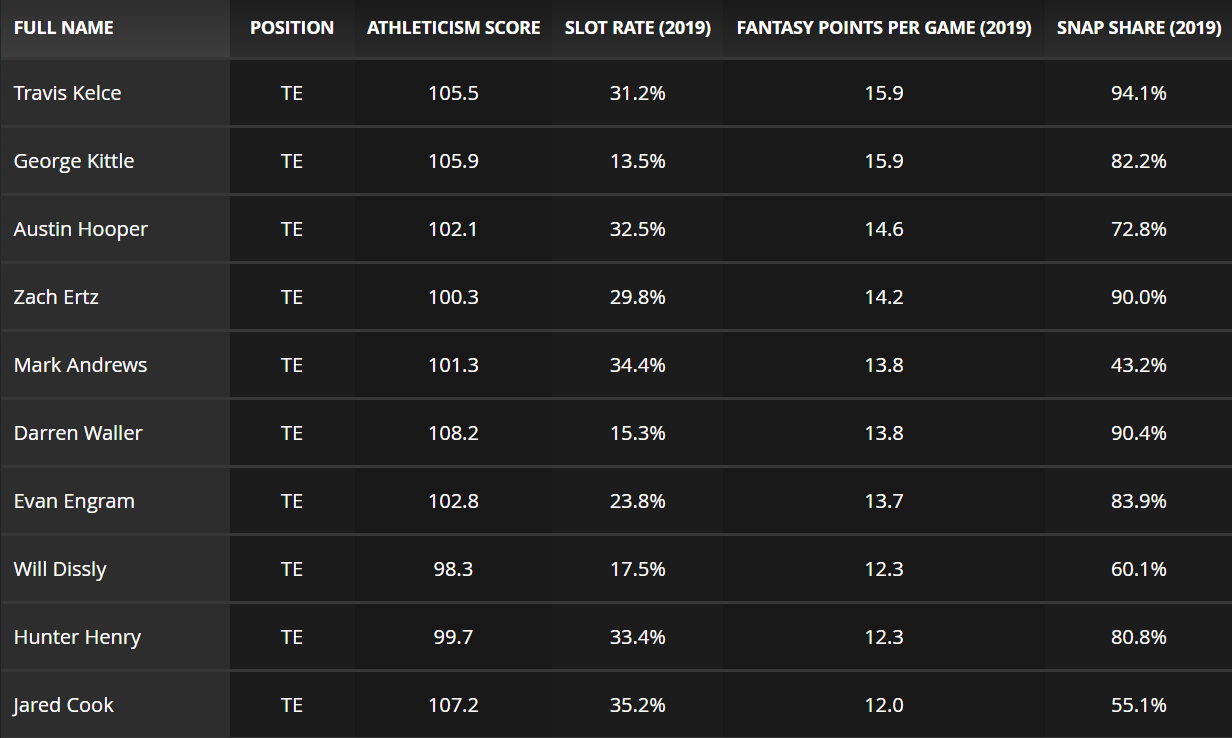 And this is where the science comes in. We know that Kelce, Kittle and Ertz are elite, but how do we replace them? What do we need to look for? 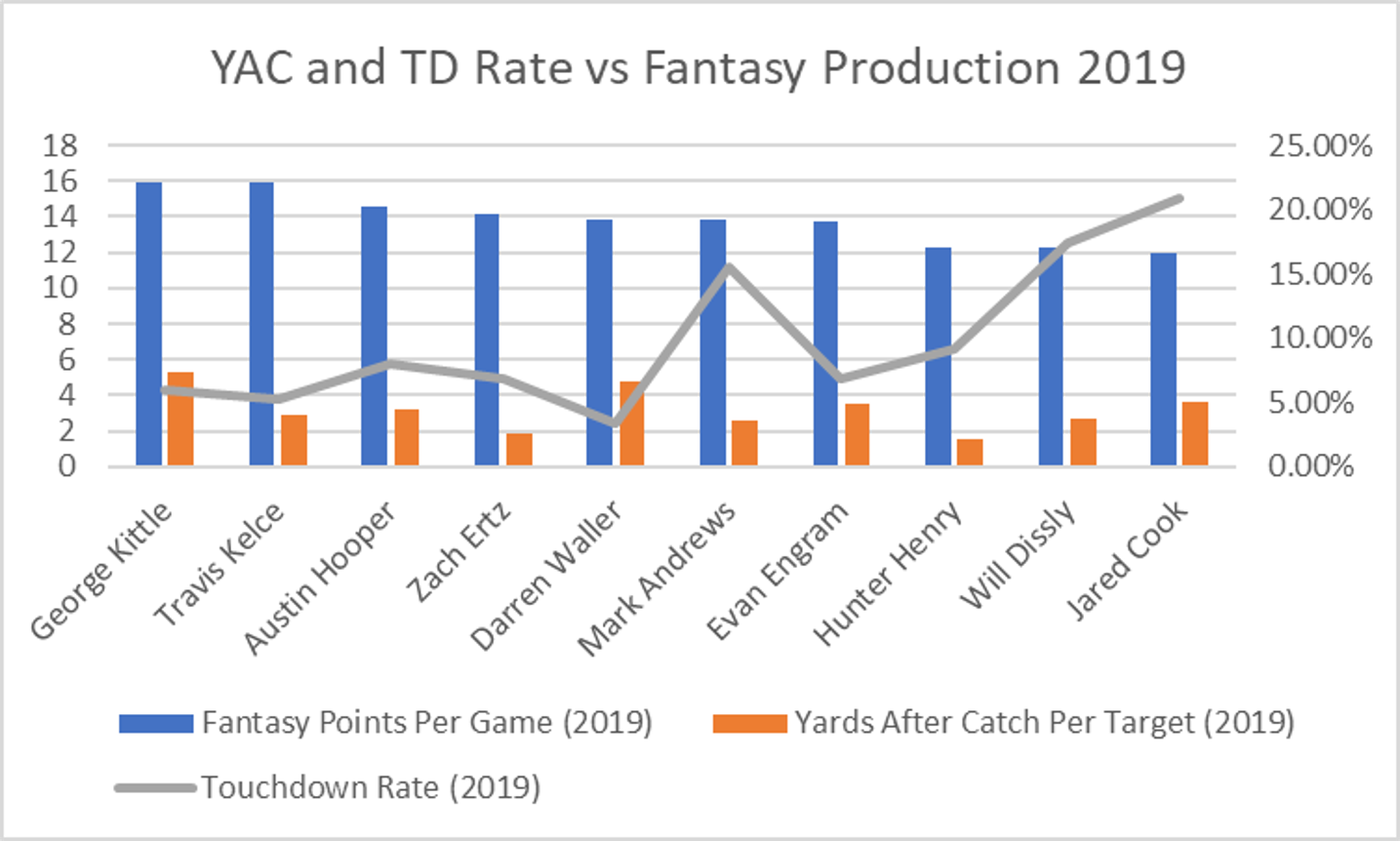 Other indicators for receivers’ fantasy production (such as YAC and red zone usage) are nice-to-have’s for tight ends, but not necessarily indicative of a tight end breakout — or predictive of fantasy production. When you bundle YAC and red zone usage with an 100+ point athleticism score, a snap share over 70%, and a high percentage of slots taken in the slot, you’ll find an elite tight end, a la Kelce and Kittle. Don’t chase YAC and red zone usage as these metrics are not reliable in predicting fantasy production. Instead, base your analysis on predictable metrics such as snap share percentage and slot usage. Outliers in TD production in 2020 to watch for in 2020 include Andrews (15.6%), Jared Cook (20.90%), and if healthy, Dissly (17.4%). In the case of Andrews and Cook, their TD production percentage could decrease in efficiency but stay flat in total touchdowns if their snap share increases in 2020, as both were under the 70% mark.

Now, this science stuff is all fine and good, but what tight ends do I use to replace one of the Big Three?

Here is who I’d be targeting (and why), based on ADP and potential snap share and slot usage. I’d be targeting these tight ends in trades, as well as in the later rounds of start-ups so you can build a solid running back base. Let other owners do the tight end development for you. Take advantage of two years of draft capital disappointment with a trade for one of the following players: 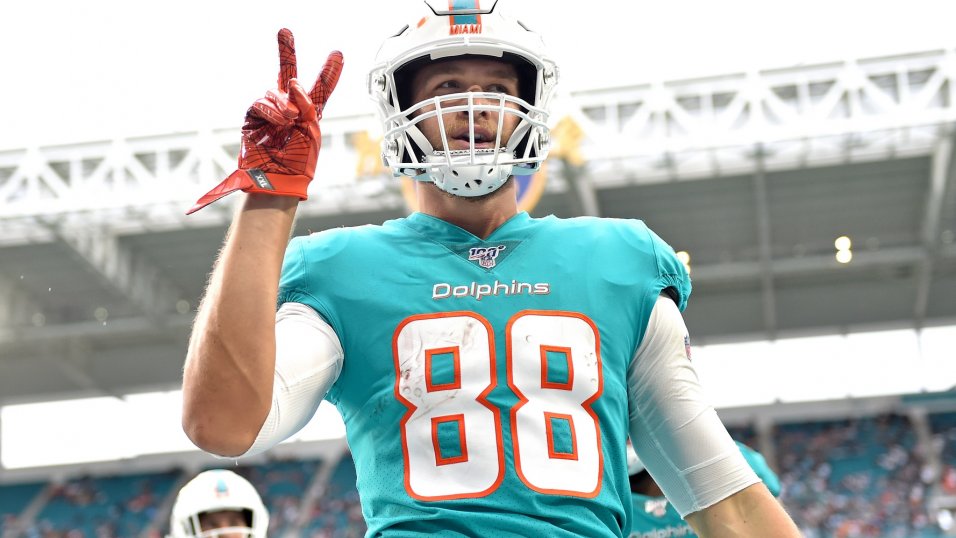 Mike Gesicki was an absolute combine monster testing over the 95th percentile in every measurable category. The Miami tight end easily checks the athleticism box, and we saw Gesicki’s usage increase last season and ascend to fantasy relevance. Gesicki posted weeks of TE5, TE3, TE2, and TE9 down the stretch. The difference? A 21.4% increase in snap share from 2018 to 2019 and 20% more usage from the slot. With no clear competition at the tight end position for Gesicki, and no threat of slot snaps being taken away, both of these usage metrics should increase. Cash in on this buy-low tight end candidate in the 11th round for what is poised to be a breakout season. Miami’s investment in quarterback, and an improved offensive line in the draft (as well as the fact that the Dolphins did not add any significant pass-catching weapons) all bode well for third-year superstar-in-the-making. 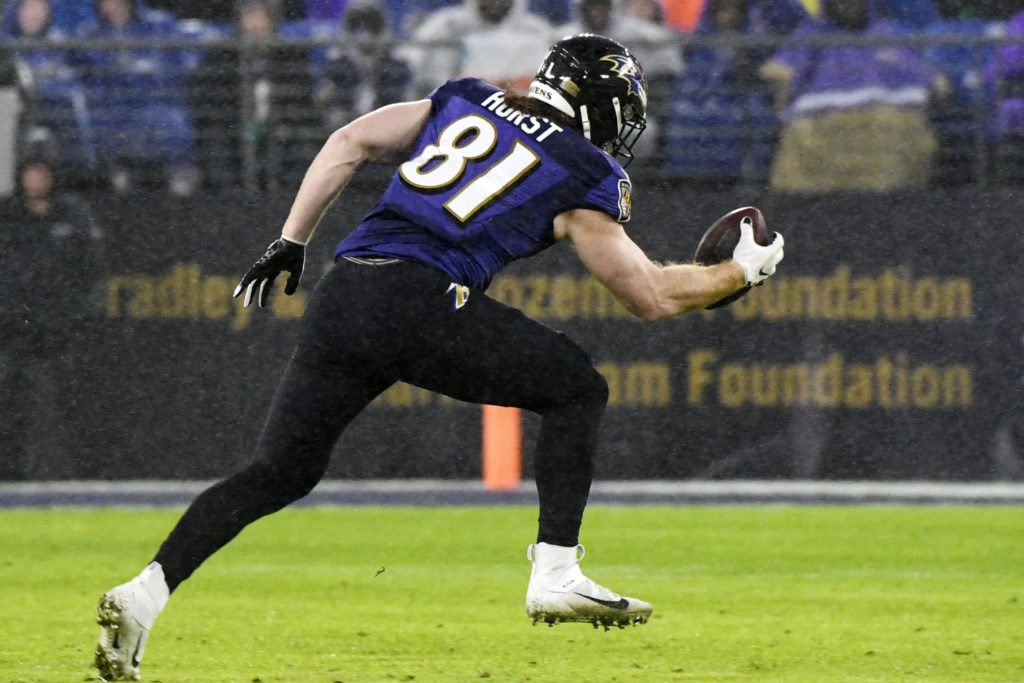 Hayden Hurst has the athletic profile that we seek in productive fantasy tight ends: 4.67-second speed in the 40 yard dash and a speed score in the 81st percentile. In his two years in the league, Hurst has not seen a snap share over 40%. The tight end situation in Baltimore was extremely crowded with the Ravens starting three or more tight ends on a weekly basis. His trade to Atlanta should change all of that. (Hooper saw increased usage in the slot that led to his breakout last season in 2019.) With no Hooper or WR Mohamed Sanu to compete with — and at his current price — Hurst is worth a shot in the 13th round of drafts. Hooper’s 97 targets will be there for Hurst to take over, as WR Russell Gage isn’t a significant threat to take over these vacated targets in the slot. Atlanta did not add any significant receving weapons in the draft, further showing support for Hurst’s role in this offense.

There are many more “stop-gap” tight ends that will get you through the immediate season: C.J. Uzomah, Tyler Eifert, Ryan Griffin, and Blake Jarwin, to name a few. All of them check the athleticism box, and are in prime situations with little competition at the position with their respective teams. Did I mention that each of the aforementioned tight ends will cost little-to-zero in draft capital? And most can likely be thrown in as part of another dynasty deal. Gesicki and Hurst are long term TE1 prospects and have probably frustrated owners with a lack of production through the early stages of their careers.

Fantasy football doesn’t have to be hard. Look for tight end fantasy production indicators in athleticism, snap share percentage and slot usage. Sell your top assets at the top of the market (The Big Three) and replace them with RB1 candidates either through draft or trade.

Remember, this is what smart kids say to drafting tight ends early in start-ups and as rookie prospects: 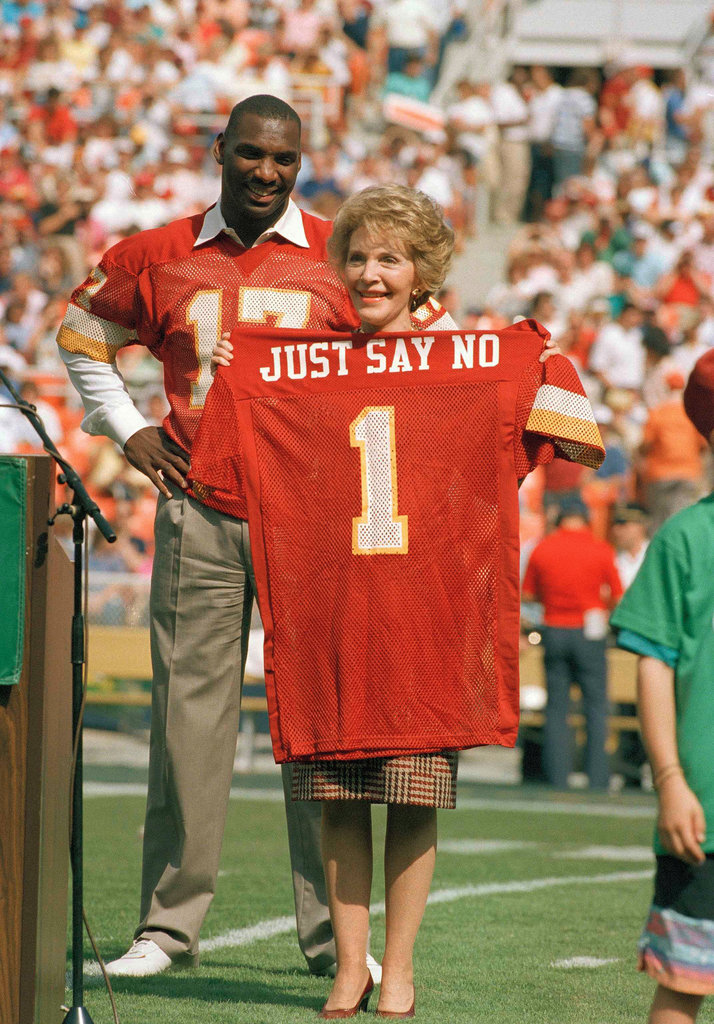