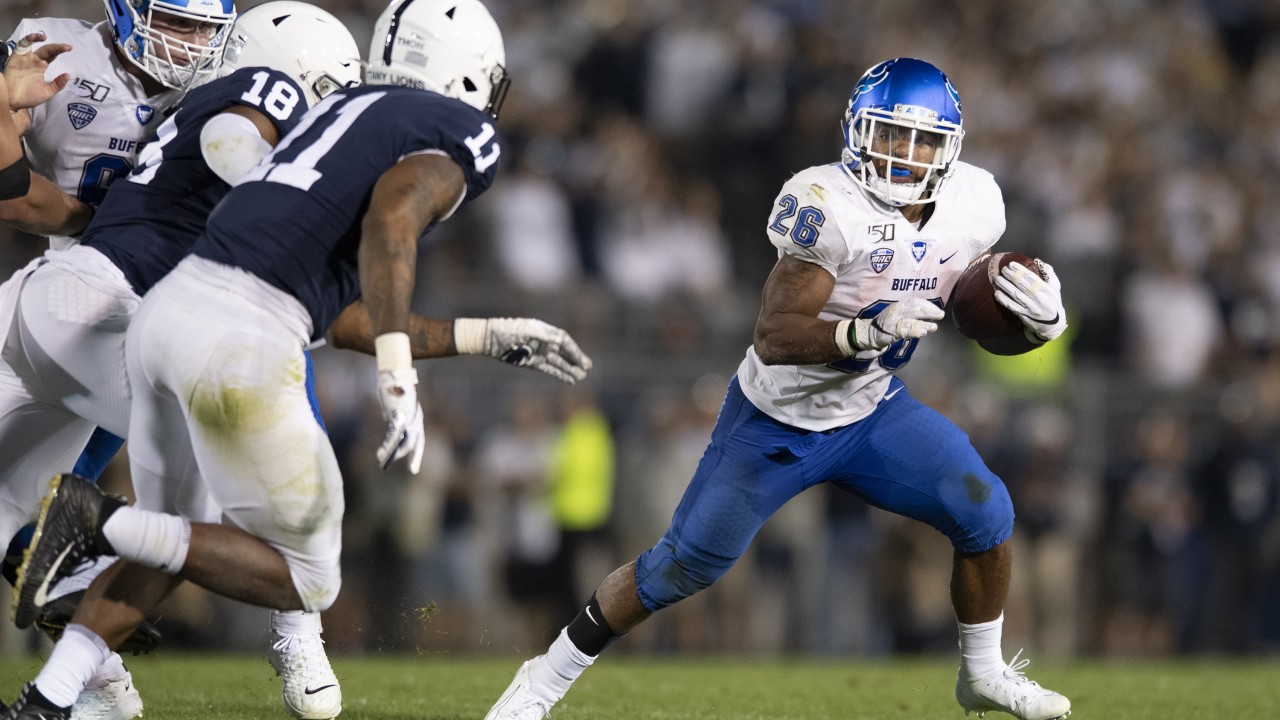 As the Buffalo Bills have finally earned some national respect, on the heels of an elevated Josh Allen campaign, the University at Buffalo’s Jaret Patterson is putting the school in the national spotlight with his play.

For those that might not know, University at Buffalo (UB) is an NCAA Division 1 program in the Mid-American Conference (MAC). Although a small, less talented conference, UB has produced NFL talent before. Khalil Mack, James Starks, and Branden Oliver are the notable names. Starks was once the starting running back for a Green Bay Packers Super Bowl victory while Oliver had some fantasy usage in 2014 as an undrafted rookie for the then-San Diego Chargers.

Patterson has easily outplayed both Starks and Oliver, while leading the Bulls to their third straight bowl appearance this season and their first top-25 national ranking in school history. 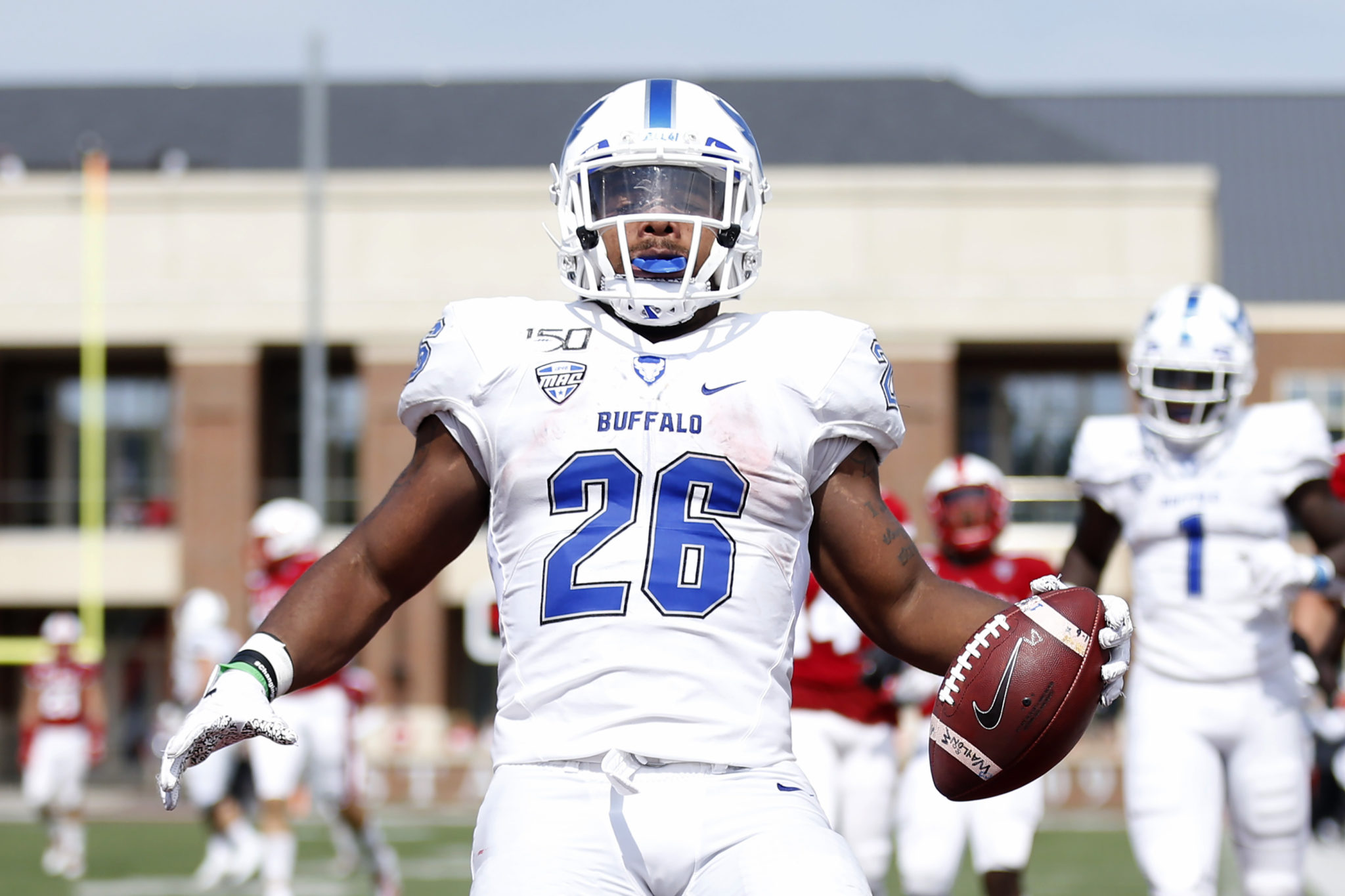 Patterson is still only a junior, meaning he still has another year to build his case for NFL teams if he chooses. It remains to be seen whether or not he will have the chance to come out this year. Most fans have just heard of him for the first time after his outrageous performance a few weeks back.

In that game against Kent State, Patterson rushed for 409 yards and 8 touchdowns. Yes, eight scores. Sure, the competition isn’t elite, but it takes some legitimate talent to have a game like that. You want to blowout the lower-level of competition if that’s who you’re going to be matched up against.

He came about 20 yards shy of the record for most yards in a game, while he got pulled early in a 30-point victory. For those who aren’t aware of Patterson, this high-level of play has been happening weekly for three seasons now. Just the week before, he rushed for 300 yards and 4 touchdowns and last season had a 300-yard, 6 score game. The numbers have consistently stayed video game-like for Patterson. He rushes for 100+ yards in his sleep.

As a Freshman, he compiled over 1000 yards and 14 touchdowns. He followed that up with a nearly 1800-yard, 19 touchdown season in 2019. In 2020, he already has over 1000 yards, 19 touchdowns, and almost 8 yards per carry in only six games. Patterson’s running in Madden, compiling close to 4000 rushing yards and 50+ touchdowns in only 2.5 years of play. Regardless of the competition, these numbers are ridiculous, and he is doing exactly what small school players need to do and more. He deserves our attention.

Despite his impressive stats, Patterson’s overall profile could be what holds him back from being a coveted asset in dynasty.

Small backs with unknown speed and an underwhelming receiving line don’t exactly move the needle on a potential dynasty asset, especially when they come from a small school. But his rushing stats continue to get better each year, blowing defenses away, which still gives us some hope. 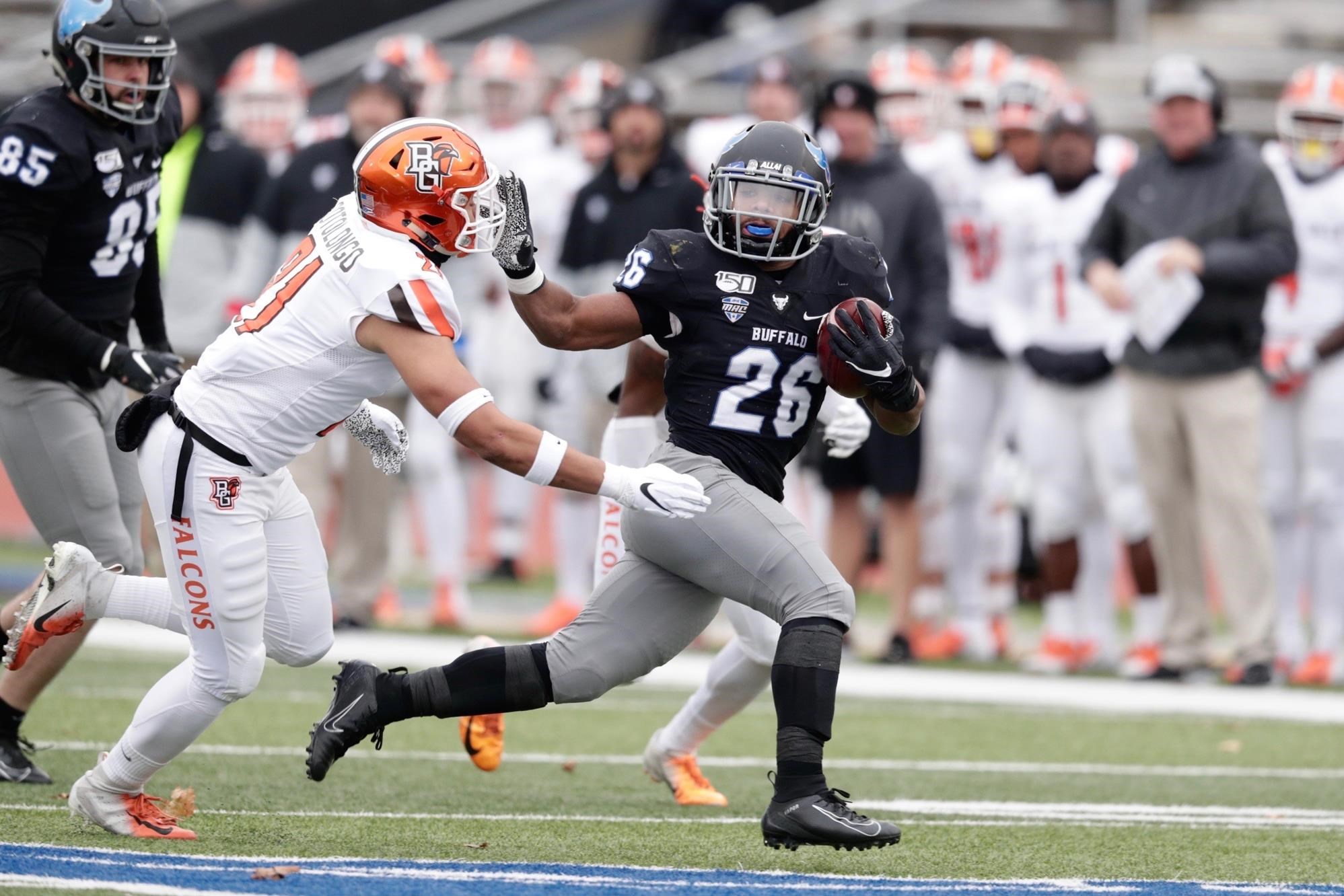 Dynasty analysts and owners can dig deeper and find that there is a lot of potential “good news” for Patterson, despite an underhwhelimg first glance at his profile:

As a freshman, his 7 receptions came on only 9 targets for 8.9 yards per reception. The season that followed, he had 13 receptions on 16 targets for 16.1 yards per reception. This season, he has no targets. Oddly enough, he’s been so good as a runner that the team has rarely needed to even pass. So, Patterson actually could be a receiving threat at the next level, showing he can catch and run, he just doesn’t get the targets to show it.

More good news: Patterson still has another season to play. There’s no reason he can’t gain 10+ pounds and train to run a fast 40 time from now until the 2022 NFL Scouting Combine. With his stats, he can also earn a spot at the Senior Bowl or East-West Shrine Game to show if he can play against “better competition”. Patterson certainly has the rushing chops and there is easily a path to improve his profile to become a potential NFL and fantasy football asset.