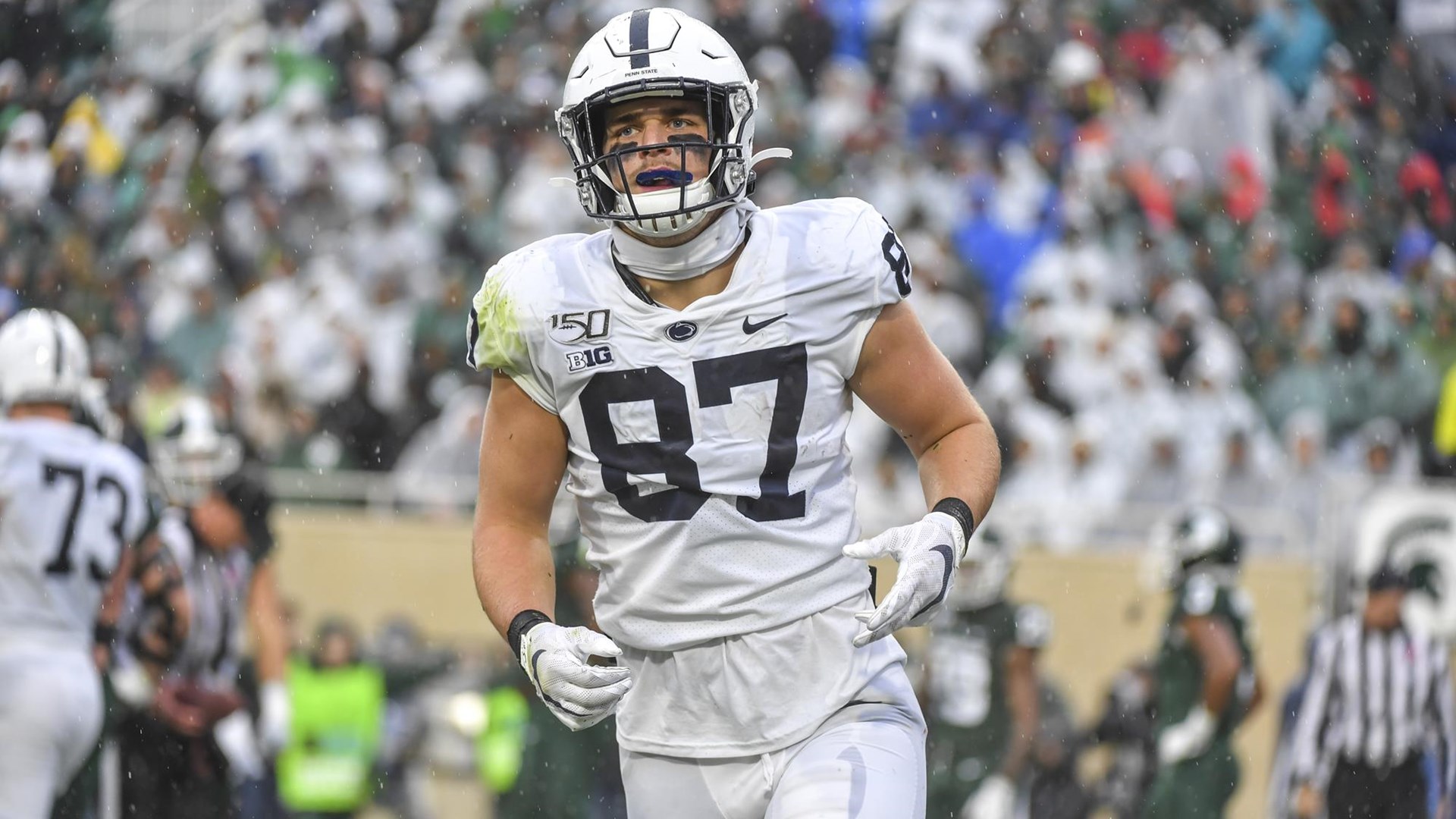 With the news that Pennsylvania State stud tight end Pat Freiermuth is to have season-ending surgery, what time better than the present to dive into his collegiate profile for the likely 2021 draft prospect.

Is a first-round selection in his range of outcomes?

Freiermuth left high school coming in at 6-5, 225 from Massachusetts, touting a 4-star rating per 247Sports and being ranked as the No. 3 tight end recruit in the nation for the 2018 draft class.

He received offers from Boston College, Duke, Louisiana State, Maryland, Notre Dame, Ohio State, and a basically the same handful of other big school programs that you’d expect a 4-star to garner. In the end, he obviously landed in Happy Valley, who had just brought in another 4-star recruit from the same class in Zack Kuntz.

Per his school’s website, after Freiermuth’s true freshman season, he ranked second among all FBS tight ends and led the Big Ten with 8 touchdown receptions. For the season, he started in nine of the thirteen games and saw a first down reception on 62% of his total receptions. His freshman year he saw awards for: Sports Illustrated All-Bowl Team, Freshman All-America per The Atlantic, 247Sports and ESPN, and was honorable-mention All- Big Ten by coaches and media.

As a sophomore, Freiermuth was seventh in Big Ten with 7 touchdowns and fourth amongst FBS players. He made a start in all thirteen games turning 43 receptions into 507 yards, both of which were second best on the team. His sophomore award accolades are lengthy, most notably he saw two John Mackey tight end of the week honors. At the end of the season, he was named AFCA All-American second team, All-America second team by The Athletic, and Pro Football Focus All-Big Ten first team.

For his junior season, he led all tight ends with 5.8 receptions per game and ranked seventh among tight ends with 77.5 receiving yards per game. He had one catch in 29 straight games, tying the longest streak among all FBS tight ends. He also broke Mike Gesicki’s touchdown streak at Penn St. of 15 career touchdowns in his game against Indiana. He finished his junior season with 23 receptions, 310 yards and 1 touchdown.

"He's, honestly, in my opinion, the best tight end in the country and it hurts not having him out there."

So, how does he look as a NFL prospect?

Awards and accolades are nice to stick on the bookshelf, but generally speaking, offer little substance when trying to project the collegiate prospect to the next level. Let’s dig into Freiermuth’s profile a bit more and see just how well he translates into being a possible first-round pick.

First, using his weight as the initial precursor, how many first-round tight ends checked in at more than 6-4, 250? 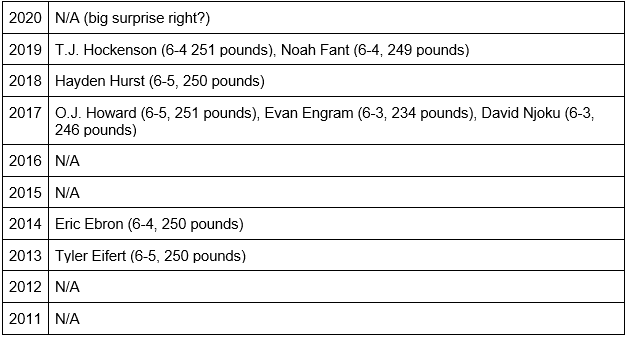 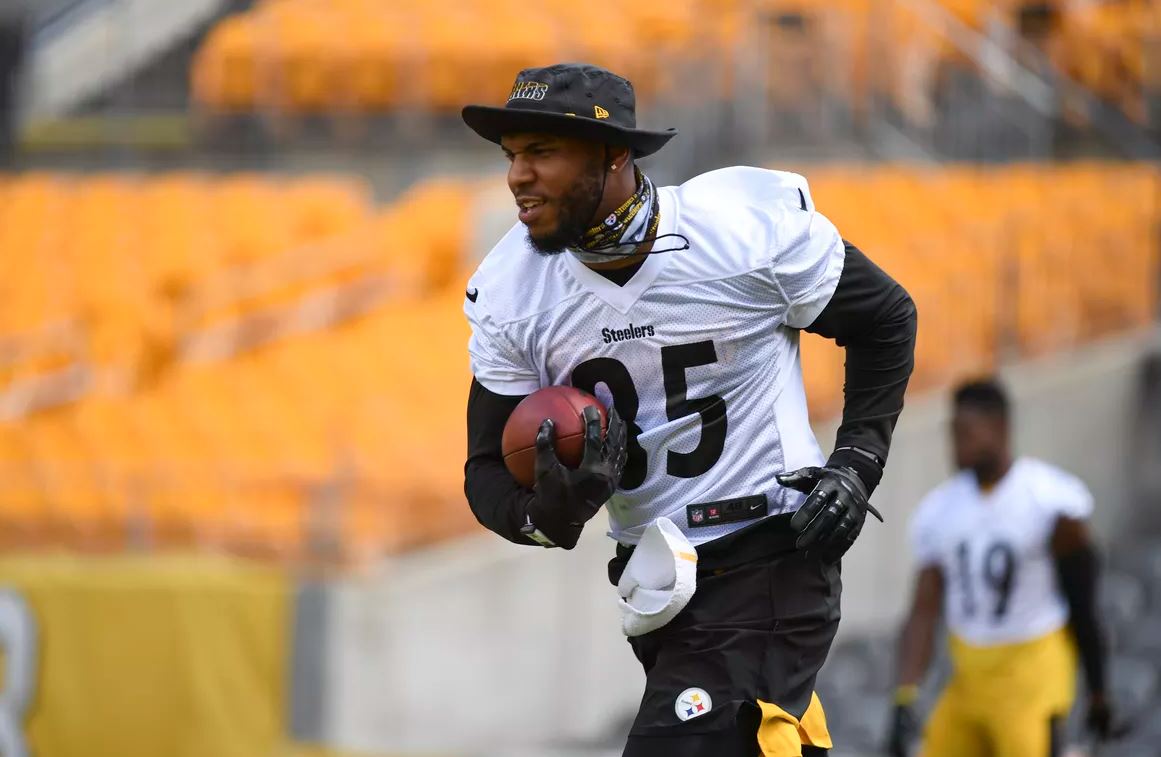 No questions asked, build-wise and on paper, Freiermuth appears to be in really good company. Assuming the recovery goes smoothly, working off his projected weigh-in, we’re off to a solid start.

He passes the eye test, what about on the field?

The numbers are there, fair to assume he can play.

He has a Dominator Rating of 27.93% and flaunted 15 touchdowns (32% of the teams’ passing touchdowns) his first two years in college. Compared to the tight ends drafted in the first-round the last ten years, the average Dominator Rating is 23.5%. Once again, we see that Freiermuth is meeting (and exceeding) another threshold, checking another box in the first-round discussion.

With all this first-round discussion in mind, question begs to be asked: Why is being drafted in the top-32 so important for a tight end?

If a rookie tight end breaks out, it is most likely that that tight end was drafted in the first-round of the NFL Draft. If that tight end does not breakout the first year, there is a 42.85% chance they will breakout year two, looking back on the last ten classes. For context, let’s see what round players were drafted in and when they broke out compared to the year they were drafted.

Note: I am classifying a “tight end breakout” by finishing the season as a top-12 tight end, PPR scoring. 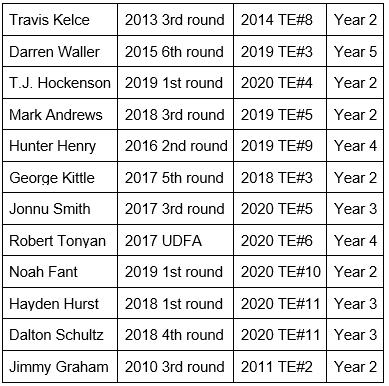 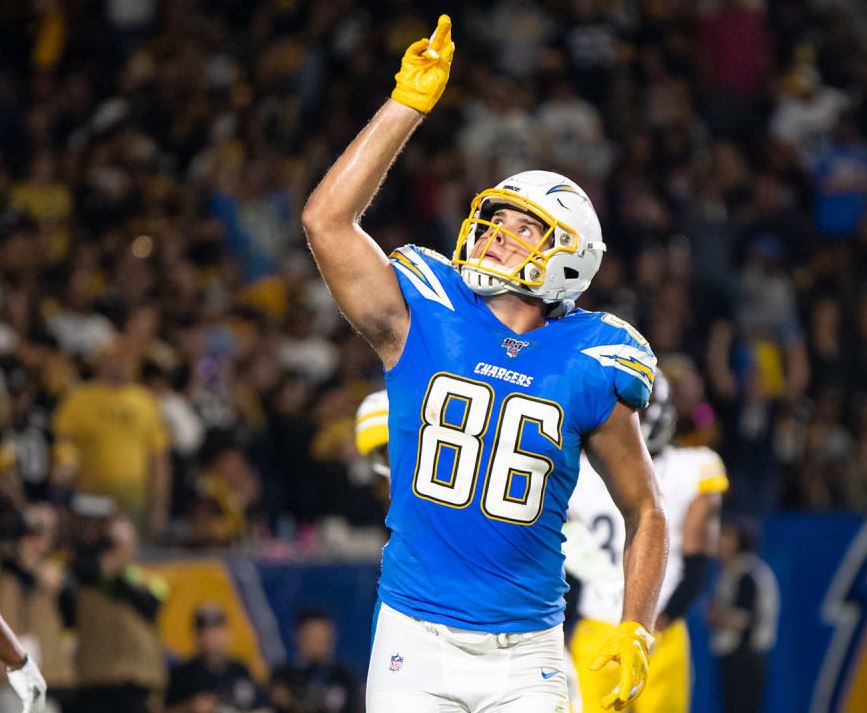 Out of the six players that broke out the following year they were drafted, two players were drafted in the first-round the prior year. This being a small sample size, due to many different factors, let’s see what year the last ten years of first round tight ends broke out: 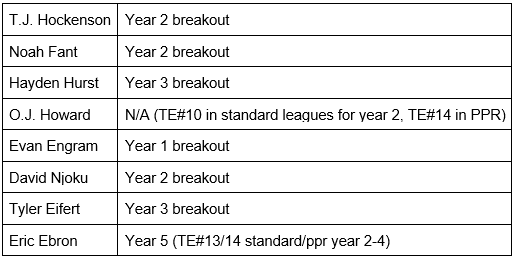 Before we close, it is also important to point out that Freiermuth is a “blocking tight end”, which I know for some is an important distinction to make when evaluating a prospect.

Why? He's just as athletic as Pitts & Jordan but more physical and a better blocker.

Remember how we all loved Hunter Bryant? Where was he drafted? He wasn't.

Given the information we currently have, Freiermuth seems to be a heat-seeking missile locked on to the first-round of the 2021 NFL Draft.

The last few hurdles he faces all take place at Indianapolis during the Combine. The biggest worry about Freirermuth will be handled during the medical review portion of the interview process, where teams will want to ensure that his injury he sustained this year healed properly and he’s 100% cleared moving forward.

Production-wise, and profile-wise, there’s a great base to work with.