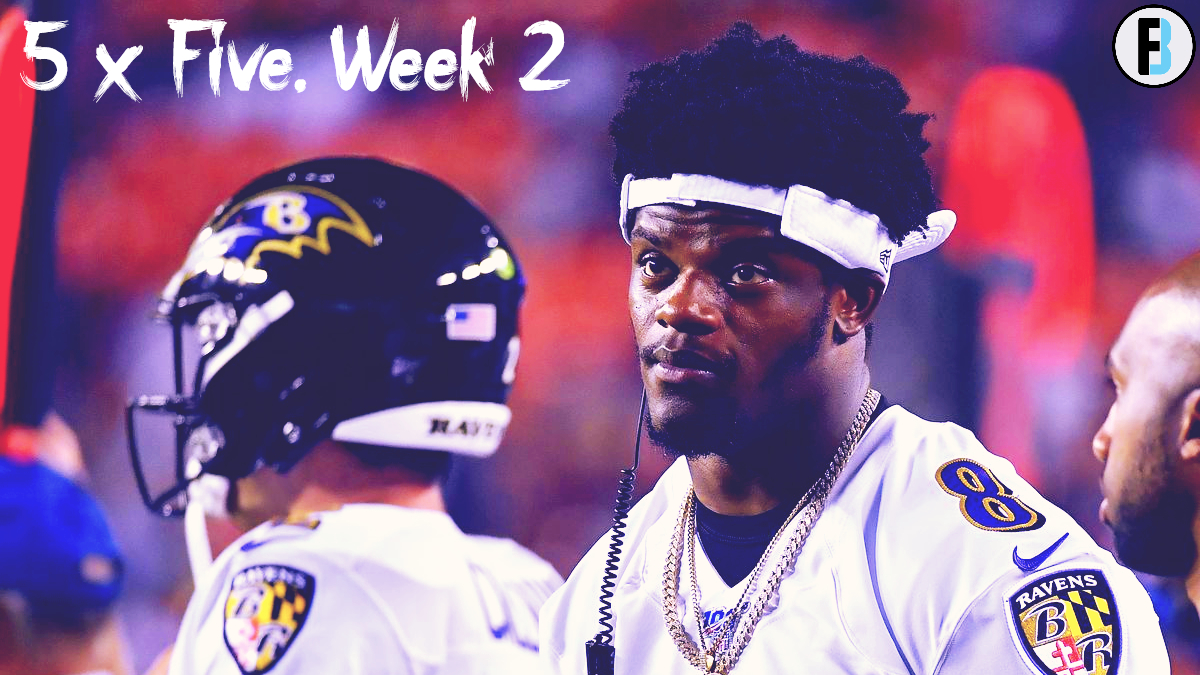 You can queue up several different podcasts from this offseason and quickly notice a pattern: Nate and I talked about Lamar Jackson and the Baltimore offense a lot. Almost too much. The takeaway was obviously that any ounce of success hinged on Jackson taking that next step as a passer. Through two games (okay, maybe one game, and one game with an asterisk, since the team from Miami isn’t real this year) he looks to be doing just that. His prowess as a runner is still evident, but he’s getting it done through the air at a nutty pace: 324 and 5 scores Week 1, and running it back with a 272-2 line this weekend, adding another 16-120 effort on the ground. He settled in at QB15 with his 121.6 (10th round) ADP via FantasyPros, which will be smashed with ease. League winner-type stuff.

jackson and friends; the “mark andrews plan” is an early success.

Let me know if you’ve heard this before: Jackson is getting it done on the ground. And while he always had a pretty touch on the ball, his efforts as a passer have certainly grown (or appear trending in the right direction through two contests). It’s worth highlighting Mark Andrews, another #BreakoutBoyz favorite, and reoccurring topic on several pods this past offseason. We were told all about the training camp rapport between Jackson and his tight end. Looks like the beat writers and big media alike nailed it. Andrews was inexplicably TE17 per FantasyPros and much like Jackson, is on pace to embarrass his draft slot. He’s had 8 and 9 targets through two games respectively, producing with over 100-yards and a score in each.

After going bonkers off of only 5 targets to the tune of 147 yards and 2 scores against the Dolphins last weekend, Marquise “Hollywood” Brown went right back to work against the Cardinals. This time, his targets more than doubled, getting looked at 13 times, producing a less-explosive 8-86-0 line (but blessing the fans with that beautiful hook-up as seen above). End of the day, he’s clearly the focal point in a Jackson-led offense that was coming off the board as the WR62 weeks ago (after missing most of the offseason; this was a blind spot for Nate and myself, as well). Arrow is screaming up.

No Tyreek Hill? No problem. Patrick Mahomes is arguably the best quarterback in the league currently, and for the foreseeable future, and while the Oakland defense was never going to pose a serious threat to that claim, Mahomes made sure he left the dirt infield in Alameda with that stamped. He was 30-of-44 for 443 yards and 4 touchdown tosses, but it felt like it could’ve easily been double that. With Hill on the mend, both Demarcus Robinson and Mecole Hardman are in line for more work, as evidence today, and both can be fired up confidently in flex spots (if not higher) on a weekly basis with Hill sidelined.

Moving along, Dak Prescott is going to get paid, and get paid handsomely. He is playing some of his best football at the right time, as Jerry Jones just watches the zeroes increase on the eventual contract and check that he’s going to have to write. Prescott’s new, first-time offensive coordinator deserves his cut of the shine, as well, breathing life into Cowboy’s signal-caller’s game but also the offense as a whole. Through two weeks: 674 yards and 7 tocuchdowns. Naughty. He was the QB17, leaving boards in the 11th round.

Lastly, Drew Brees left Sunday’s contest very early with a banged up thumb. Reports following the game were ominous, and we expect to know more in the coming day or days. No Brees under center is an obvious hit to Michael Thomas, Alvin Kamara, and others.

Dalvin Cook‘s box scores on the ground thus far: 21-11-2 and 20-154-1. He averaged 7.7 per tout on Sunday, and made the final stat line look a lot more appealing after breaking off a 75-yard run and score in the second quarter. As long as he remains healthy and available (he was a buy-low candidate of sorts entering the offseason given the hesitation some folks had given the injury history), he’s going to remain a star in Gary Kubiak’s system.

“panic” in new england? what are we doing with josh gordon after antonio brown’s arrival?

All the off-field headlines aside for Antonio Brown, when he’s active and on the field for the Patriots, the pie gets smaller. This was a common sense conclusion to draw even before we saw Tom Brady force-feed his new weapon in Brown on Sunday (8 targets right out of the gate). Josh Gordon managed just 5 targets by the time the final whistle blew, culminating in a 2-19-0 day against the helpless Dolphins. It hasn’t happened to Gordon at this point in his career, but he’s not the most talented option on the roster, nor is he the go-to look. I know, this hurts me, too.

Gordon’s ceiling remains high enough given his natural abilities and the logo on his helmet, but realistically, it’ll be an up-and-down ride with the options at Brady’s disposal on a weekly basis.