When Auburn’s 2019 leading rusher Jatarvious Whitlow surprisingly decided to enter the transfer portal, he left a ton of vacated rushing production up for grabs. Here we take a look at my personal favorite to break out and lead the Tigers’ RB room in 2020, sophomore and 2022-eligible RB D.J. Williams. 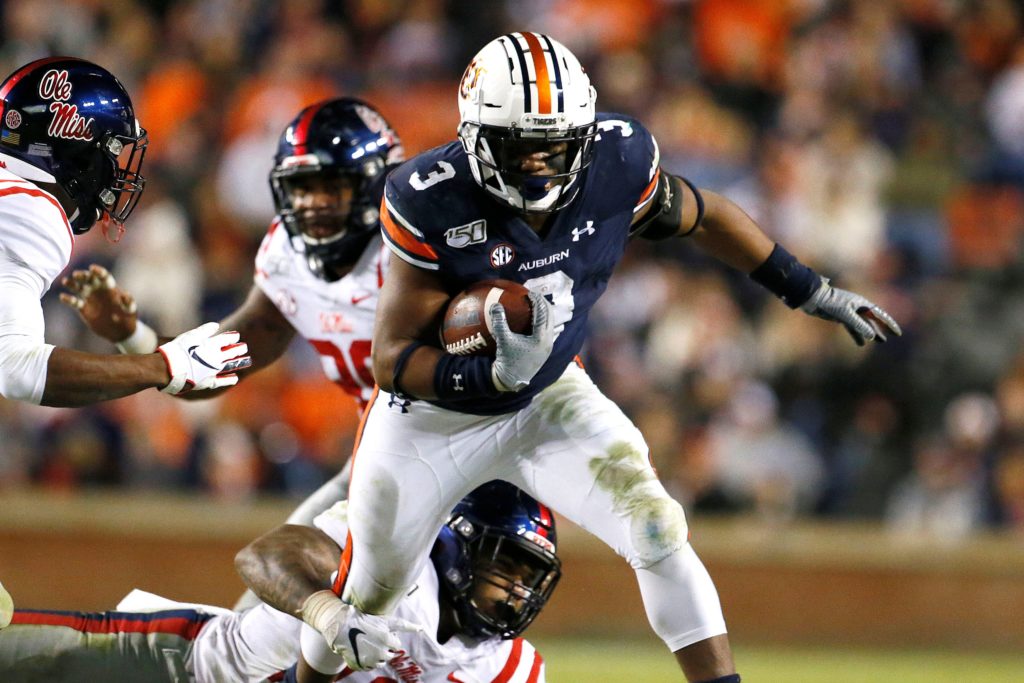 Williams started as a dual-threat QB for the Sebring Blue Streaks in his hometown of Sebring, Florida. While his recruitment interest was rather quiet during an injury-plagued junior high school season, the nephew of former NFL great Edgerrin James lit the field on fire and became a one-man show for the Blue Streaks in his senior season. Williams threw for 1,113 yards and 7 TDs to go along with 1,221 and 21 TDs on the ground. Before his senior season, he held one offer from Appalachian State as a 2-star prospect. Within a few months, Williams held offers from Alabama, Georgia, Miami, Michigan and more, eventually deciding to take his talents to Auburn and finishing as a 4-star prospect.

Standing at 5’10″, 216 lbs. with NFL-ready size, it didn’t take long for Williams’ electric ability to start turning heads as a freshman at Auburn. He capped off his spring with a strong outing in the Tigers’ annual spring showcase and quickly became a fan favorite.

D.J. Williams showcases patience, burst and lateral agility as he breaks through tackles and rumbles for a 29 yard gain during Auburn’s 2019 spring game.

After the spring game, Williams had to unfortunately undergo a procedure that lingered well into the first month of the season. The good news? His return to the field couldn’t have come at a better time, as Auburn’s leading rusher at the time, Jatarvious Whitlow, suffered a knee injury that would sideline him for the next few weeks. Williams took his opportunity and ran with it – gaining 303 yards on 53 touches over the next three games, while showing a willingness in pass protection and a decent set of hands when called upon. All of this coming against SEC competition, including this 130-yard effort vs #1 ranked LSU:

Williams’ patience is on display here. Not unlike former Auburn and current Detroit Lions RB Kerryon Johnson, Williams waits after getting the snap, reads the line, and allows his blockers to engage. It’s this kind of awareness and nuance to his game that already shows he has signs of maturity at the position, even one that is relatively new to him. He finds a few extra yards with some nifty vision and delivers a nice hit, displaying good contact balance to shake it off and keep churning.

In contrast to the first clip, Williams shoots the hole the minute he gets the ball. No patience needed. He gets up to speed quickly and bursts into the second level. Unfortunately, he steps out of bounds at the 4-yard line, eventually prompting a field goal from Auburn. The game ended as a crushing, 3-point loss vs. the reigning national champs. LSU safety Grant Deplit (#7) shows great hustle here to chase Williams down, which leads to questions about Williams’ top speed, but his burst off the line and game speed seem like more than enough.

When Whitlow returned, Williams’ playing time decreased. However, he earned a solid 40/60 split with Whitlow (29 to 43 rushes) the rest of the way. Williams finished his freshman season appearing in 8 games with an 84/400/2 TD stat line on the ground and 5/32 through the air, finishing as Auburn’s second-leading rusher.

With Whitlow moving on to bigger and better things, 57.1% of vacated rushing production is now left behind. Auburn head coach Gus Malzahn likes to get his depth touches, but he typically has one guy lead the way (about 50% of total RB touches, health permitting). The hiring of Chad Morris as offensive coordinator should bring more versatility to the RB room. Over the past two years, Morris’ running backs have averaged 45 combined catches and have accounted for an average of 15% of the total passing offense. While he did OK when asked to catch the ball, this will be an area that Williams has to get more experience.

There will be a closely-watched battle in the Tigers’ camp this fall, with no shortage of worthy competition. This includes:

A few things work in Williams’ favor here. He has already earned the trust of the coaching staff and has found his way onto the field as a productive true freshman, showcasing good athleticism and big play potential. Malzahn also hasn’t started a freshman RB for the last decade (Michael Dyer, 2010). Williams will likely come into camp with the first crack at starting reps. It will be Williams’ job to lose, and I’m betting he steps up to the plate with the hopes of bringing Auburn its first 1,000 yard rusher since Kerryon Johnson.

Williams’ startup ADP is usually around the 40-50 range, placing him around RB17-20, which has already begun to signal a rise since Whitlow entered the portal. If Williams can improve and get an opportunity to showcase his ability as a pass catcher, I believe he has the build and skillset for a favorable outlook in the NFL – with a ceiling comparable to Mark Ingram and Kareem Hunt. I wouldn’t be surprised if we are discussing Williams as a 2nd round startup pick by this time next year.