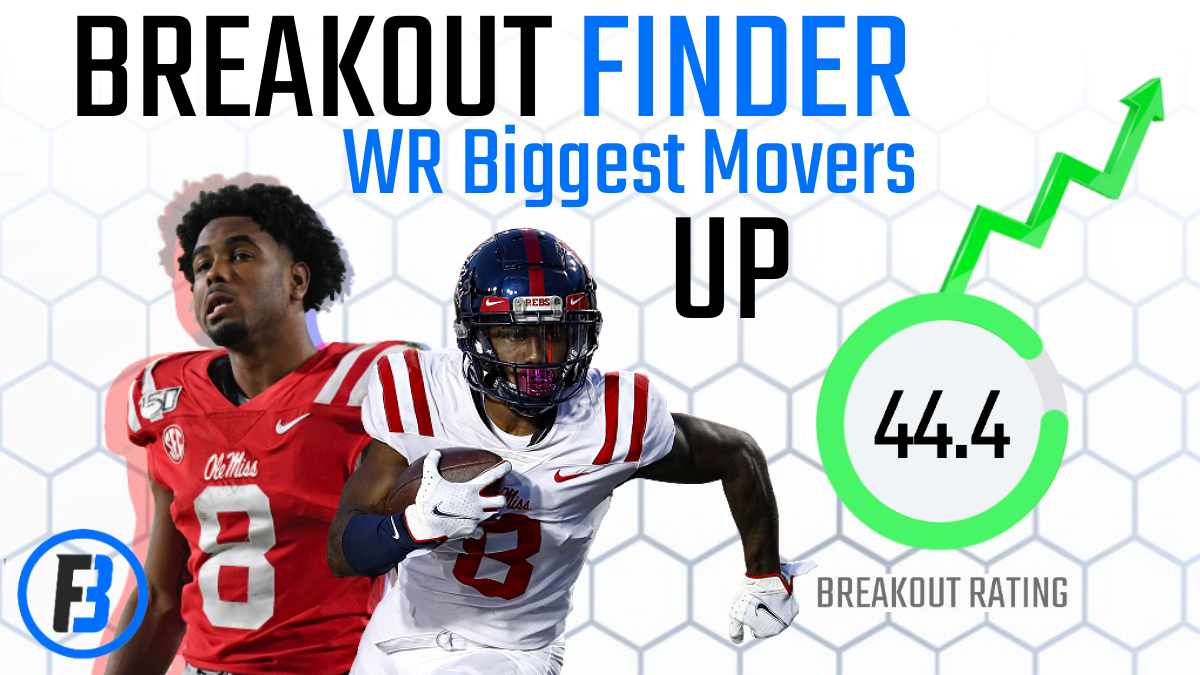 This article will focus on the three biggest risers at the WR position.

Jets Head Coach Robert Saleh on Moore: “He’s dynamic. When he gets the ball in his hands, he becomes something different. His ability to separate on routes, run the jet sweeps, come out of the backfield- he’s extremely versatile. I’m ecstatic he was able to get to us. There’s not a lot of things he can’t do.”

Besides Devonta Smith, there was no WR more dominant in college football last year than Elijah Moore. A dynamic and elusive player, Moore had one of the greatest seasons in Ole Miss history. He hauled in a school record 86 receptions and led the nation with an eye-opening 149.1 yards per game. In only eight games played, Moore nearly passed A.J. Brown for the most receiving yards in a single season, trailing by only 127 yards despite playing only eight games to 12 for Brown. Simply put, Moore continually fried SEC defenders all season long. He was unstoppable.

How many yards will Elijah Moore have in 2021? 🔥 pic.twitter.com/nRcV45xco3

Moore compensates for his 5-10 size with some of the best route-running abilities in this class. He also ran a blazing 4.35 40-yard Dash at his pro day. Many expected him to go in the first round of the 2021 NFL Draft. When he fell to day two, The Jets were ecstatic to find him still available and took him at No. 34 overall. After using the second overall pick of the draft on QB Zach Wilson and solidifying their interior offensive line, The Jets wisely added a weapon like Moore to help maximize their new QB’s potential. While Corey Davis and Denzel Mims will see their fair share of targets on the outside, and Jamison Crowder is still on the roster for now, Moore has a clear path to being team’s most targeted player, even as a rookie.

Packers GM Brian Gutekunst on Rodgers: “He fills so many holes for us. That’s one of the reasons we traded up for him. Not only as a punt returner and slot receiver, but as you guys have seen over the past few years, the creativity that Matt has within his offense, some of the jet sweeps and screens. He’s a 212-pound receiver, he’s not one of these smaller guys. So I think kick returning could be part of his arsenal as well. He’s just built for us up here in Green Bay. Very versatile plyer. Very smart player.”

Amari Rodgers is one of the more intriguing wide receivers in this year’s draft. He is only 5-9, but is 212 well-built pounds with a 4.52 40-yard Dash time. He even took part in RB drills during Clemson’s Pro Day, displaying a potentially diverse skill set and the capability of handling manufactured touches as a high-volume slot receiver. When the Packers took him with the No. 85 pick, he not only filled an immediate need, but he now has the day two draft capital that dynasty players look for from the WR position.

After playing alongside fellow Clemson NFL WRs like Tee Higgins and Hunter Renfrow, Rodgers dominated the targets this past season in Death Valley. He was an all ACC player with 77 receptions for 1,020 receiving yards and seven touchdowns. He also had some success as a return man. Rodgers has a strong pedigree; his father is Baltimore Ravens WRs coach and former NFL player Tee Martin. Coincidently, it was Martin who coached Packers great Randall Cobb at the University of Kentucky. Cobb would be a high-end comparison for what the Packers expect from Rodgers, but he will certainly have a shot at being the team’s second-most highly targeted receiver from the moment he steps on the field in Green Bay.

See how the 2021 WR Prospects compare to past classes NOW ⬇️https://t.co/FKpFe9cA0D pic.twitter.com/LWU8opWaYR

Chargers Head Coach Brandon Staley on Palmer: “We do feel like he can go inside to the slot and run that tree as well. It gives us a bigger body guy that can match up against smaller nickel-type people or a linebacker to get that separation. Just feel like he’s a complete player, and we’re really excited about him. He really showed a lot in the evaluation process.”

Justin Herbert was a breath of fresh air in Los Angeles last season. He passed for 31 TDs with only 10 interceptions on his way to winning Rookie of The Year. In fantasy, we want pass catchers attached to an ascending talent like Herbert. When the Chargers went to make their pick in the third round of the NFL Draft, some may have been surprised to see them take Josh Palmer, a player who only managed 33 catches for 475 yards and four touchdowns as a senior. But stats do not tell the whole story.

Was Josh Palmer the reach of the NFL Draft? 🥵 pic.twitter.com/wr8A858sqA

Tennessee has had horrific quarterback play, but Palmer opened some eyes by popping on film against some of the best defensive backs in the country. Per PFF, Palmer averaged 16 yards per reception and had all four of his touchdowns against future first round NFL players in Jaycee Horn, Patrick Surtain, and Eric Stokes, along with second rounders in Tyson Campbell and Kelvin Joseph. He had 25 receptions of 20 yards or more during his career as a Vol.

Palmer has good size at 6-1, 210 lbs, and ran a 4.52 40-yard Dash. He was impressive during Senior Bowl week and was, by all accounts, one of the best receivers during practices. He followed up his great week of practice by scoring on a 14-yard TD reception during the game. Mike Williams is entering a contract year. It is not hard to project Palmer taking on a large role in year two and contributing this season as a WR3 or WR4 in what should be a highly productive offense.