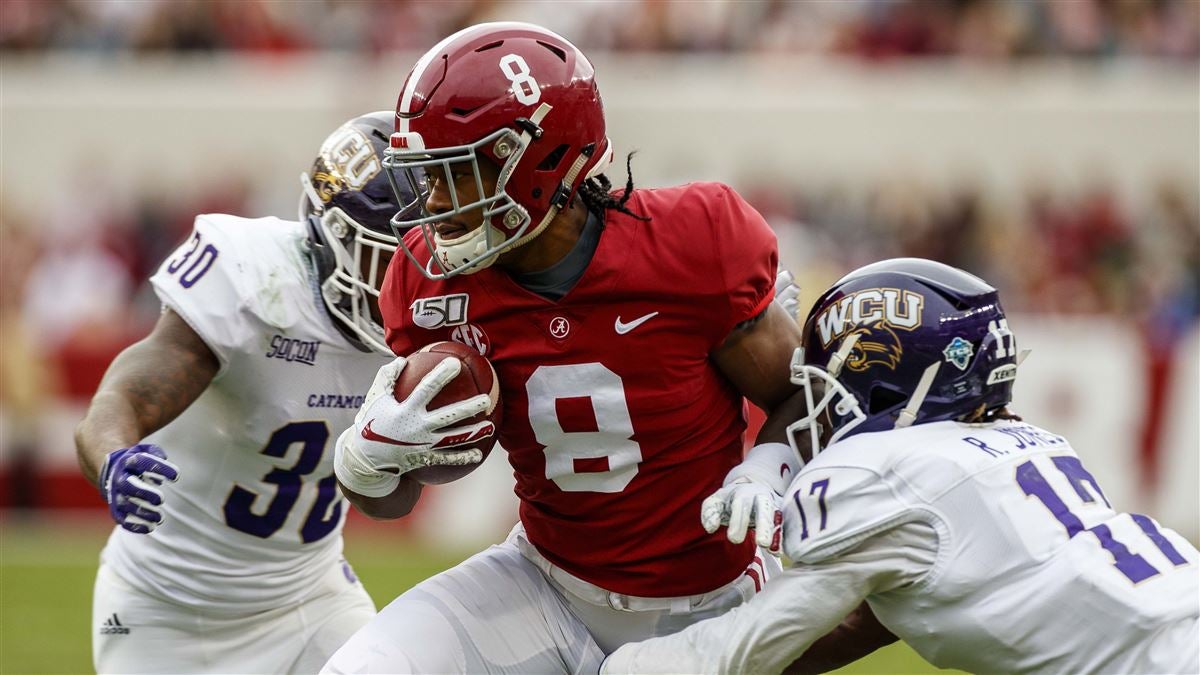 The sophomore year for a wide receiver is the most important of their career.

If they didn’t breakout already as a freshman, it’s their last chance to be productive before becoming upperclassmen, where we see late-breakout players with a higher chance at underwhelming at the next level (e.g. Hakeem Butler).

Note: The predictability of the metrics are from Peter Howard’s Market Share Database (@pahowdy on Twitter). The RY/TPA and Yards MS statistics come from Devy Data’s database.

To start this off, let’s look at the most promising sophomore breakouts of the season so far. He’s in his second year at Alabama as an incoming 4-star recruit. Standing at 6-0, 195, John Metchie has the stature to be a top wide receiver at the next level.

His production got off to a rocky start in his freshman year, ending with only 4 receptions for 23 yards in four games. That was good for only .06 RY/TPA and a 0.5-percent Yards MS. Not unexpected, though, seeing as he was competing for targets with Jerry Jeudy, Jaylen Waddle, and DeVonta Smith (ex. TEAMMATE SCORE). As a true freshman, even the best receiver would have trouble pushing three potential first-rounders for playing time.

Coming into his second year, he was slated as the third receiver on the depth chart, and he’s taken full advantage so far. He has a stat line of 11 receptions, 298 receiving yards, and 2 TDs in only 3 games. Earning a whopping 3.78 RY/TPA and 25.4-percent of Alabama’s reception yards, he’s on pace to be top-3 of the 2022 class.

To put that into context, the average RY/TPA and Yards MS for wide receivers with at least one top 24 season in Howard’s database comes in at 1.9 and 23.9-percent, respectively. That is assuming he came into the season at 19-years old. The fact that he is almost doubling the average RY/TPA and earning a 25-percent Yards MS with two other first-round receivers on the team is amazing. He also has an insane 27.1 YPR which is a sign of his talent down the field, but may also be related to the top 2 corners on the opposing team covering Waddle and Smith, leaving Metchie to do whatever he wants.

Metchie’s biggest game of the season came against the No. 13 ranked Texas A&M team. He blew them away with 5 receptions, 181 yards, and 2 TDs. That’s the stat line of an alpha receiver, and with a 78 yard TD reception, there’s no question he has the speed to destroy in the NFL. He’s currently my WR3 of the 2022 class.

Next up is Zay Flowers, a 3-star recruit from Boston College. Measuring 5-11, 178, he’s much smaller than the average top-24 NFL player, but so is Marquise Brown.

His freshman season was decent, but it didn’t rise to the level of a breakout. He came in third on his team in receiving yards behind TE Hunter Long and junior WR Kobay White, and his advanced stats were a competitive 1.12 RY/TPA and 14.9-percent of his team’s receiving yards. Even with Long still on the team in 2020, Flowers is currently leading Boston in reception yards and touchdowns.

He’s pulling a promising 2.66 RY/TPA and 29.5-percent Yards MS, which if you recall from the average top-24 wide receviers, are both above average. With 19.3 YPR and longest reception of 77 yards, he’s showing he can threaten the deep part of the field and has the speed to break away for a long one. This showed in his game against Pittsburgh when he dropped a 6-162-3 line completely dominating the game and leading Boston College to the win.

He has a good sophomore QB he can grow with this year and maintain that stability into next year. His prospects in the NFL are promising if he can follow on the path he’s on this year, and improve on it next year. 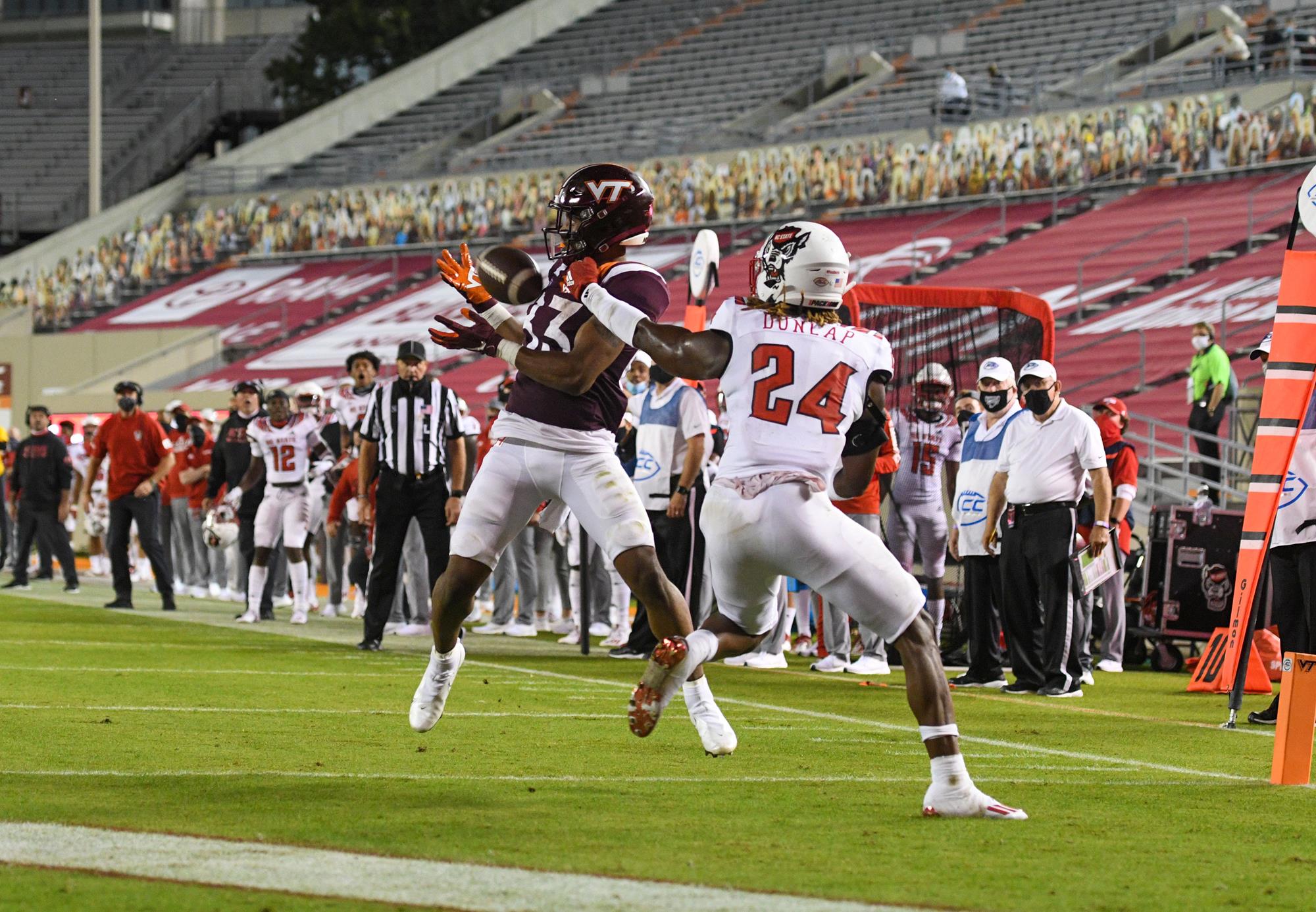 Here is a 4-star prospect who was recruited to Virginia Tech standing at 5-10, 186. With Tayvion Robinson, the height is concerning for him to be a proper alpha, but the NFL is changing, and speed and separation ability are taking over. In his freshman year, he was also third on his team in receiving yards behind WR Tre Turner and TE Damon Hazelton. He ended the season with 1.26 RY/TPA and a 15.7-percent Yards MS, both decent numbers, but not above average.

This year, Robinson has gotten off to a decent start. His raw stats aren’t great, showing only 10 receptions for 170 yards and 2 TDs. This is where context helps. His QBs are putrid and are currently completing less than 50-percent of their passing attempts. This drags the stats and the entire offense down. Despite that, he still has an impressive 2.43 RY/TPA and 29.7-percent Yards MS with a 17.1 YPR, which are all well above average.

My long-term concern with Robinson is that the QB-play will continue to be abysmal and the NFL scouts won’t notice him. Looking forward, he needs to continue outproducing the average play of (Tre) Turner and increase his production if he wants to up his draft stock. 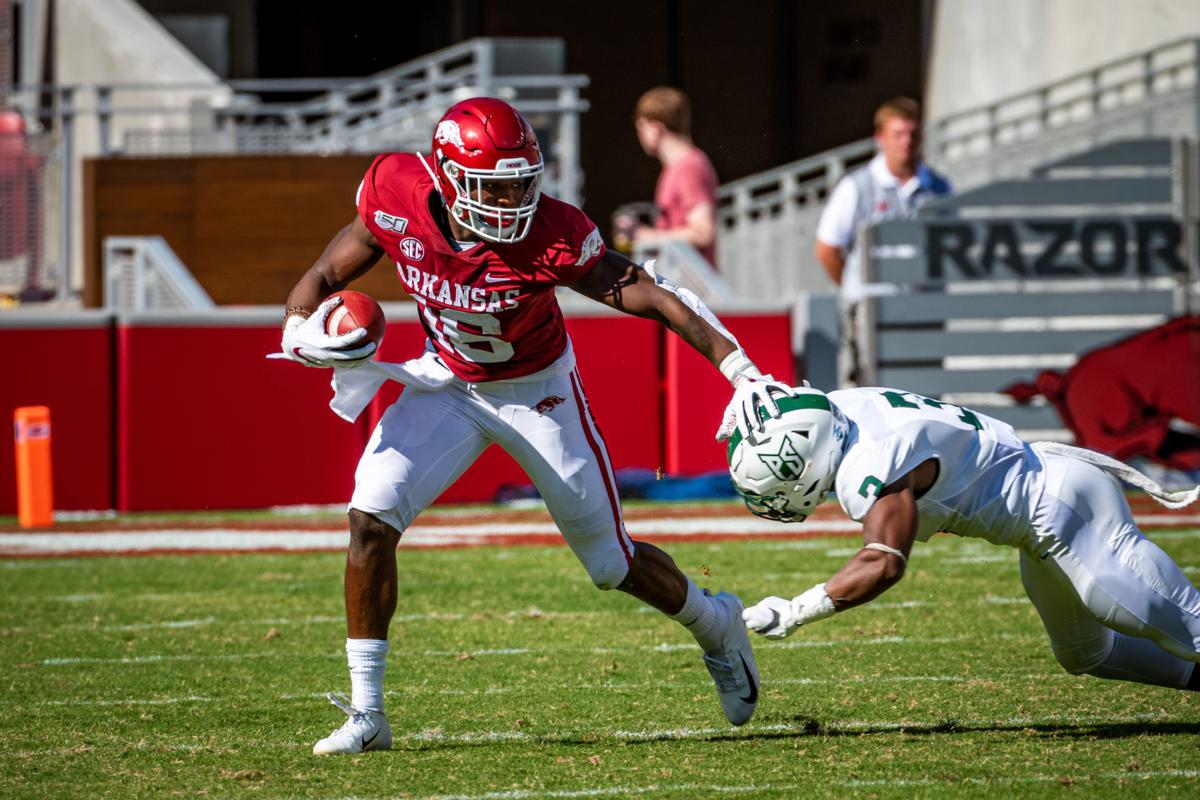 My final breakout player for you is more of a flyer. He broke out in his first game of 2020, but was injured in the second game and hasn’t played since. He’s a flyer due to the minimal data this year, and what his production looks like when he gets back is highly variable. Treylon Burks was a 4-star recruit coming out of high school and committed to Arkansas. He stands at a staggering 6-3, 231, well above average. Arkansas was a low volume passing offense in Burks’ freshman year, but he was still the highest yardage producing player on his team with 475 yards. This was good for 1.17 RY/TPA and 20.5-percent Yards MS, both below average, which is why he’s on this list.

In his single game played this year, he destroyed the No. 4 ranked Georgia team pulling in 7 receptions for 102 yards and 1 TD, with the TD coming off a 49 yards reception. The advanced stats on this game gave him a 2.62 RY/TPA and an amazing 50.3-percent Yards MS! Both well above average for sophomore year players. If he can come back from injury and continue his control of Arkansas’ passing game, he will find himself rocketing up draft boards.