The 2023 running back class is one that already has folks foaming at the mouth. It certainly seems on a trajectory to rival the 2020 running back class. Amongst running back projections, size plays a large role in figuring out which running backs I want on my Devy teams. A big role in projecting the expected size comes from utilizing Noah Hills’ “Your Favorite Devy Running Back Is Too Small. Now What?” article.

Blake Corum started out the recruiting process a hot commodity, being recruited by 29 colleges. The most notable schools that were interested were Ohio State, Georgia, LSU, USC, Wisconsin, and Penn State. Corum received a 0.9419 composite score, translating into a 4-star grade from 247sports. According to his Michigan webpage, Corum is 5-8 and 200-pounds. 247sports has him listed at 193-pounds.

Using Noah’s projections, Corum’s projected Combine weight falls into the 209-217-pound range. He rushed for 1,415 yards as a high school junior, tacking on 280 receiving yards and 20 touchdowns. Corum rushed for 1,260 yards as a senior, adding 152 receiving yards off of eight receptions and 22 total touchdowns. That year, he performed in ‘The Opening Regional,” during which he ran a 4.44 40-yard Dash, a 4.22 20-yard shuttle and recorded a 33.8-inch vertical, all verified. Corum also was awarded the 2019 Gatorade Player of the Year in Maryland and received an invite to the Under Armor All-American Game.

While Corum’s high school career was impressive in itself, what I am most impressed with are his measurables. His Speed Score would be a projected range of 99.32 – 102.93; that range is due to an inaccurate weight. Either way, that’s a fantastic foundation for Corum to build upon. His 20-yard shuttle is not elite, but it is an above average shuttle and shows that he has a likelihood of recording an upper-percentile Agility Score. His vertical is in similar company to his shuttle, not elite but above average. Once he gets into a collegiate weight training program, the foundation he currently has shows that his upside is massive. 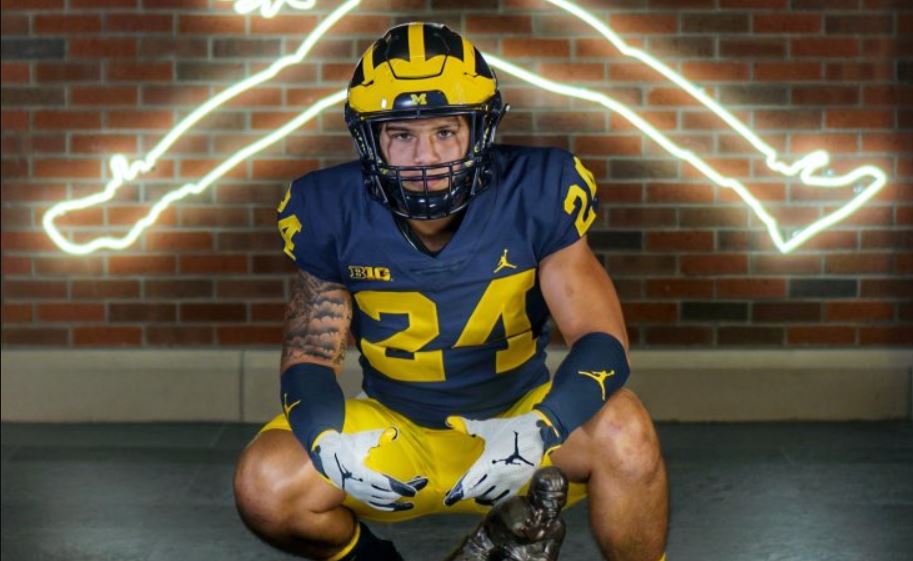 Through Michigan’s six games, Corum logged 26 carries for 764 rushing yards and two rushing touchdowns, adding five receptions for 73 yards. He has also had five kick returns for 96 yards. These numbers aren’t sexy, nor even something to boast about. However, context is important with everything, especially numbers. Corum battled for touches with Hassan Haskins, Zach Charbonnet and Joe Milton, ranking No. 3 on the team in total touches and No. 2 in running back touches. However, he is lacking in terms of production on the ground when compared to his other running back counterparts. In fact, his yards per carry ranked lowest of the three.

While this may be doom and gloom, the light parting the dark skies is his receiving production. Corum’s 14.6 Yards per Reception ranked No. 3 on the team behind Ronnie Bell and Cornelius Johnson, both of whom are wide receivers. In all-purpose yards, he ranks No. 2 among the running backs, mostly on the back of his receiving production. The crux of this situation is that if he continues to be a threat as a receiving back, he will continue to see opportunity on the field.

Looking at Michigan’s breakdown of carries and opportunities, Corum ranked No. 2 with 31 ahead of Charbonnet and his 25. What I want to make sure is being understood here is that Corum is currently usurping last year’s acclaimed prospect in Charbonnet. In fact, Charbonnet did not even get on the field in the last game against Penn State. Haskins has all but secured the primary ball carrier role, but he is 2022 draft eligible, which opens the door for Corum in his junior season.

Moving into Corum’s sophomore season, some questions need to be answered:

First and foremost, is he able to add weight to his frame? If Corum is unable to continue to bulk-up, his fantasy allure quickly diminishes from a workhorse to a satellite back. The second question: Can he improve his efficiency on the ground? Having an underwhelming 2.9 yards per carry is a concern for his profile thus far, but he can quickly put that to rest with a more productive and efficient sophomore season. Corum has made a good impression his freshman year as a dynamic player, even without an illustrious initial profile. His current C2C/devy ADP is pick No. 203.09.