dynasty diamonds in the Jacksonville rough 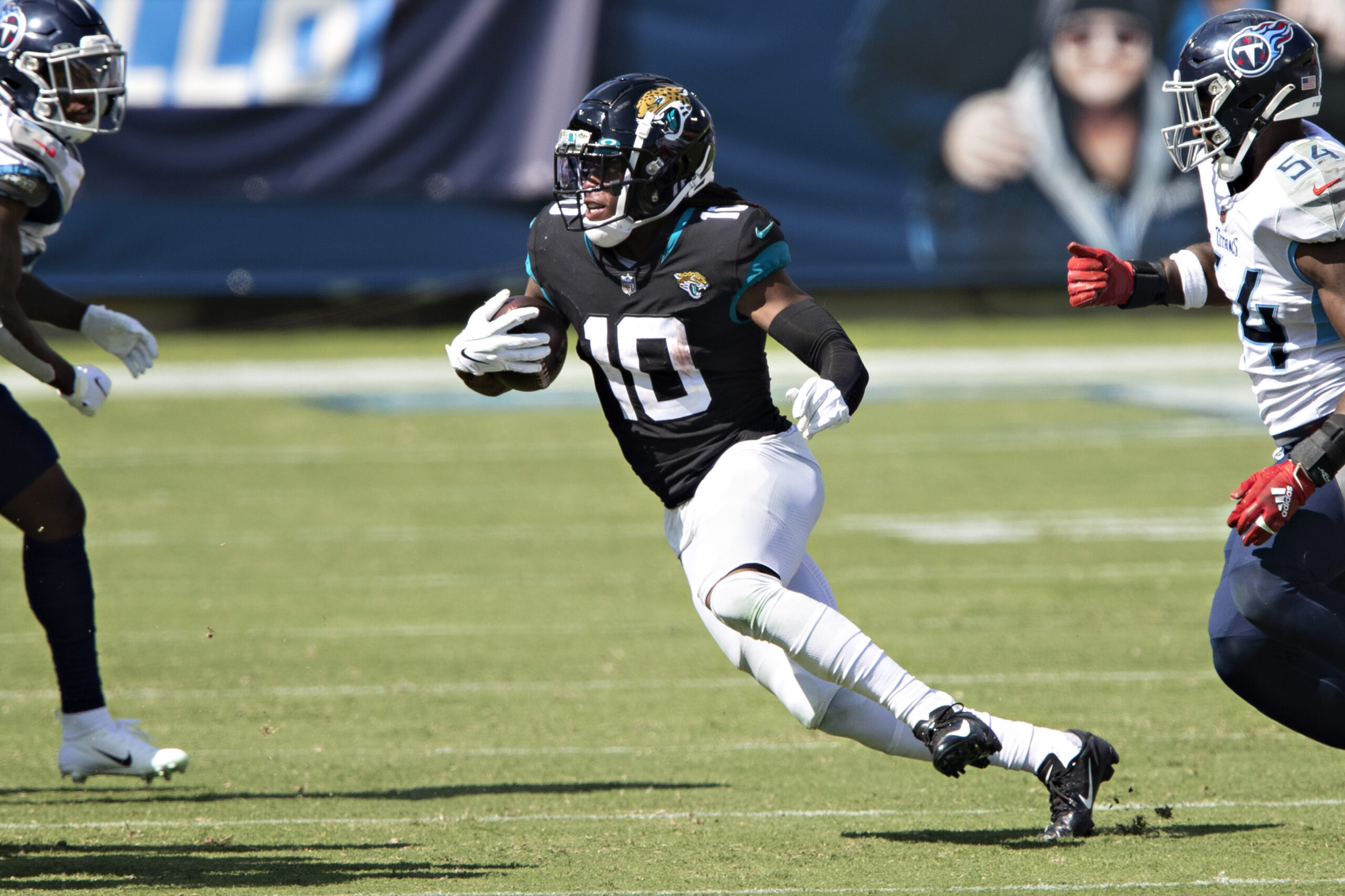 The coaching carousel and offseason changes came upon the fantasy football community as swiftly and sudden as the Bernie Sanders curmudgeon MEME reigned down on pop culture. “We live in a society” where the major coaching changes are great opportunities to get in early on players who underachieved expectations during the previous season, giving Reddit sharks the ability to crush the people who find themselves shorting athletic specimens we know are ready to produce in more fertile situations.

What are these situations you ask? A primary example is the Jacksonville Jaguars, a team that has spent the past decade tanking only to land blue chip prospects like Blake Bortles and Leonard Fournette while trading away arguably the best corner in the league, Jalen Ramsey. However; this year brings optimism with the team landing the No. 1 pick in the upcoming NFL Draft that has one of the best QB prospects in history waiting to be taken in Trevor Lawrence. That, along with one of the best offensive minds in college football history with a reputation for program building and sustainment coming to Jacksonville in Urban Meyer, should provide a scenario where an offensive resurgence could play out. 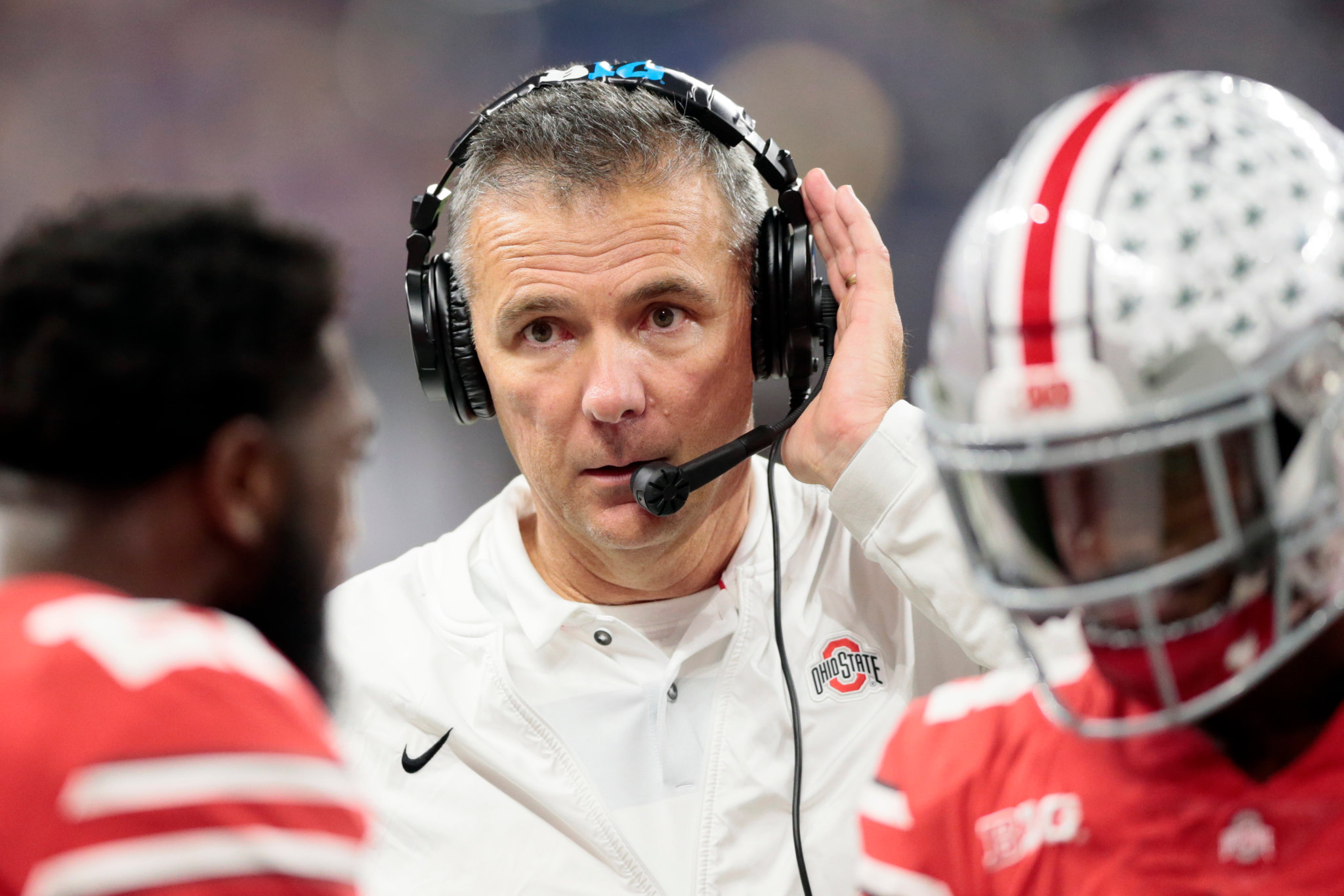 Let’s take a look at Urban Meyer’s coaching record to help navigate the map to offensive success for the 2021 Jacksonville Jaguars:

Meyer is one of the most consistent and successful coaches in college football history and has a track record for program building and high-powered offenses. He took Utah to a BCS bowl and coached them to a win over Pittsburgh, turned Florida around and captured two National Championships, and created a NFL player powerhouse at Ohio State while winning the first ever College Football Playoff. Elite recruiting and player development allowed him to help get eight players drafted in the first round over the last two years of his coaching stint at Ohio State. The manner in which Meyer-coached programs won, was by fielding high-octane offenses that centered on getting their playmakers the ball in open space. 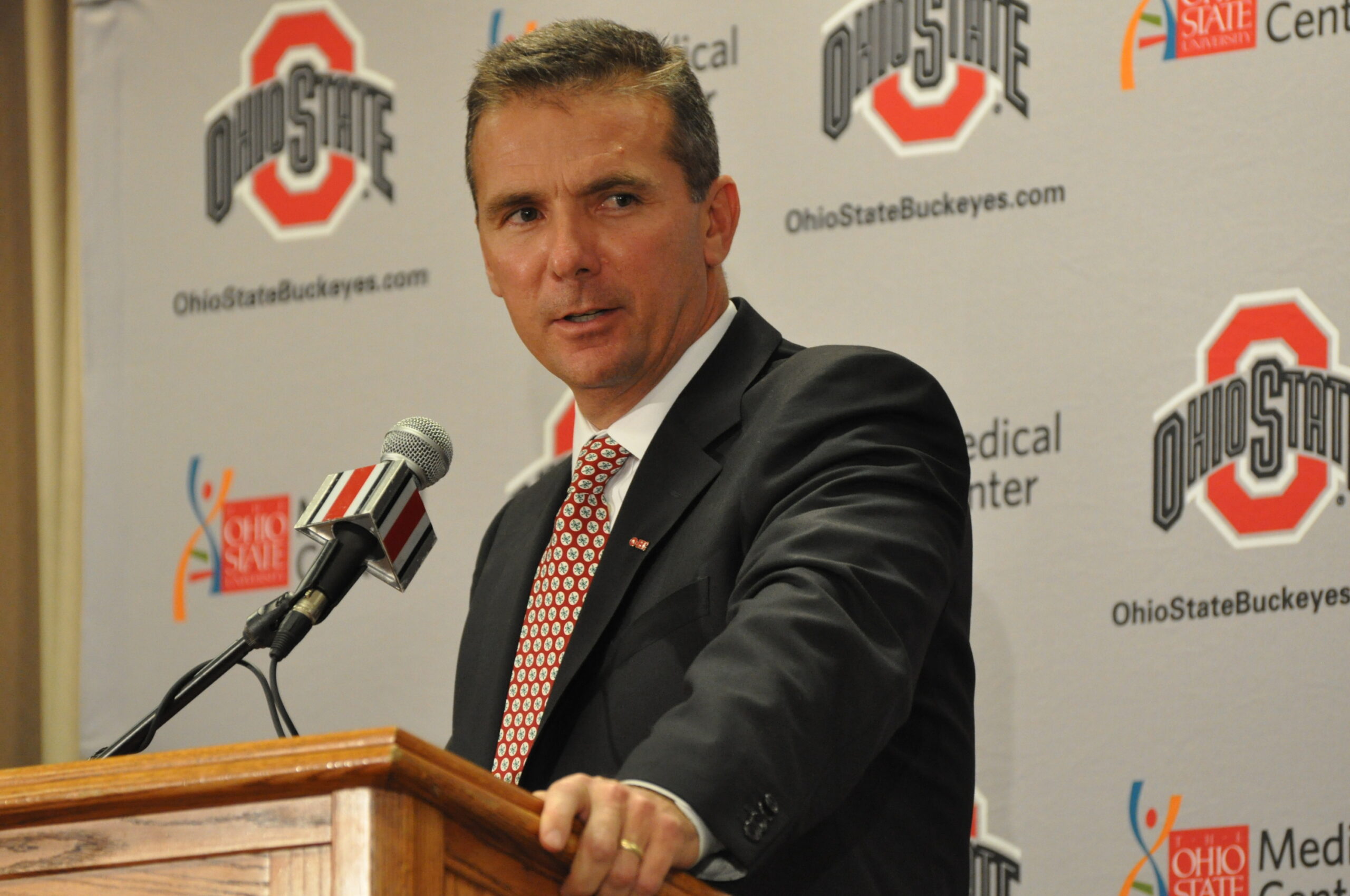 During his last four years at Ohio State, his offenses AVERAGED on a per-game basis (at nearly 75 plays per game):

His personnel informed a lot of the decisions that went into his offensive play calling as his tenure as Ohio State’s coach went on. He enjoyed having Ezekiel Elliott as his primary runner and rode him like a true workhorse running back during the 2015 season, to the tune of 43 rush attempts per game. What’s impressive about Meyer’s play calling is the evolution based on player strengths. In his final season as head coach, he moved to a much heavier passing scheme that resulted in 40 pass attempts per game spread equally amongst his best playmakers. With the likes of Terry McLaurin (35 receptions for 701 yards and 11 TDs), Parris Campbell (90 receptions for 1063 yards and 12 TDs), and K.J. Hill (70 receptions and 880 yards and 6 TDs), it is quite understandable the change in play-calling tendencies. 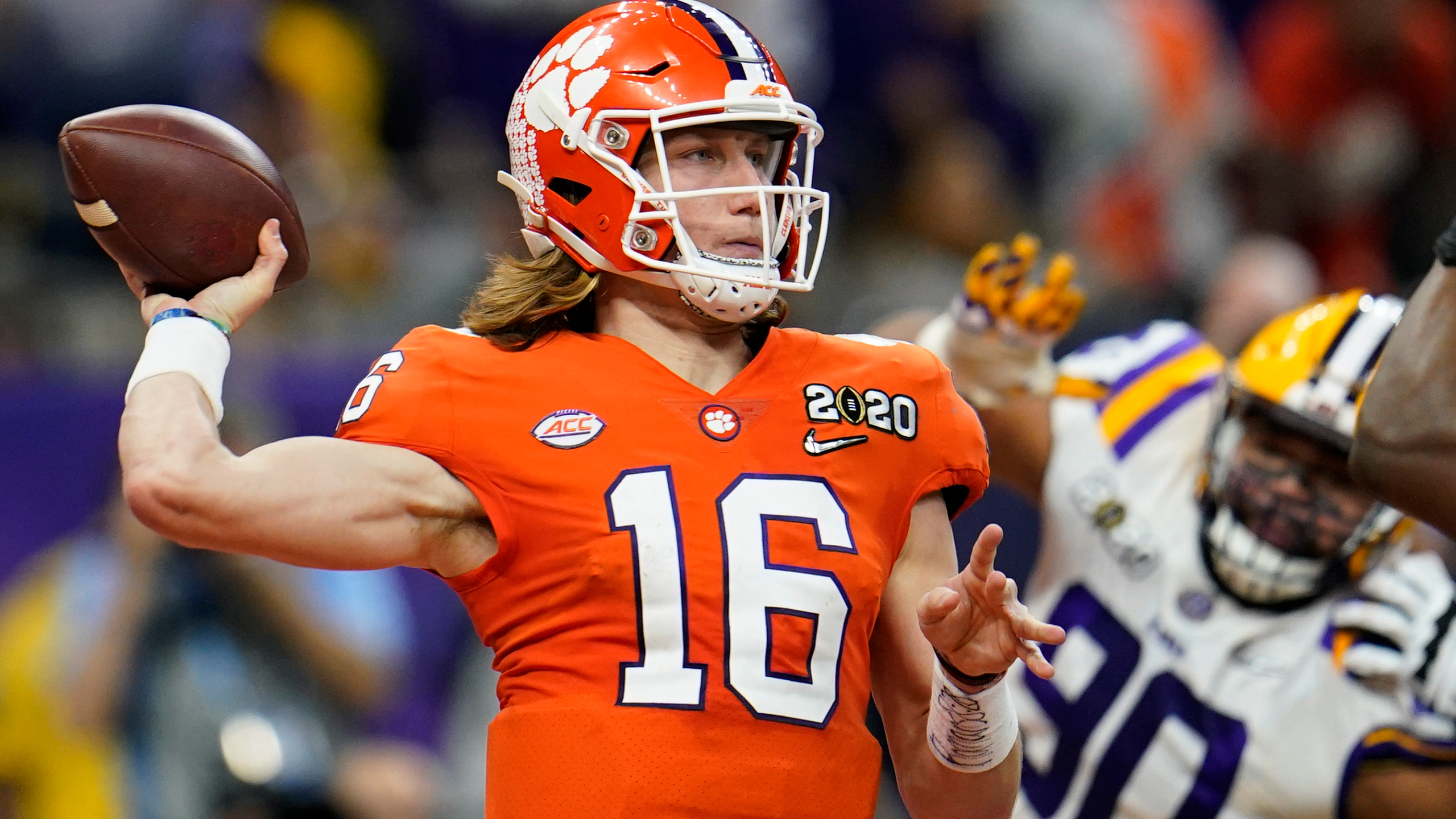 The biggest number to point to in the passing game is the Adjusted Average Yards per Attempt (A/YA). In the two seasons under Darell Bevell as OC in Detroit, Matthew Stafford ranked in the top 12 in A/YA in the league (8.5 A/YA over two seasons). Bevell showed a willingness to test defenses deep, and Stafford was able to execute at a high level. Meyer’s offenses at Ohio State were predicated on shorter passes that put players in space to execute with heightened athleticism. Again, the evolution of his Ohio State offense shows in his QB’s A/YA rising nearly two yards during the 2017 and 2018 seasons with Dwayne Haskins at the helm.

Though the situation will undoubtedly improve under a competent offensive mind (sorry Gus Bradley), the biggest argument for offensive competency will be the addition of Trevor Lawrence with the No. 1 overall pick in the 2021 NFL Draft. Lawrence is regarded as one of the most complete prospects in recent history and will be a cornerstone for the franchise over the course of the next 5-10 seasons. His college play was stellar to say the least, with a three year average of: 66.6-percent Completion Percentage, 3,366 Passing Yards, 30 TDs, 5INTs, 9.8 Adjusted Yards per Attempt. Those stats, coupled with an 87.3 College QBR that ranks in the 91st-percentile among qualified quarterbacks, illustrate a QB who Meyer and Bevell will be able to entrust a high octane passing offense that stretches the defense and opens up routes underneath for other playmakers to get the ball in space.

If Meyer and Bevell can churn out a per-game pace of 65 plays, that would put them in the top 10 of the league in plays per game and Pace of Play. Under the assumption that the offense operates at a 52/48 pass-to-run split, that would allow 33 pass attempts and 31 rushing attempts per game. With Meyer’s preclusion to get the ball into the hands of his most athletic playmakers and the Jaguars improving the QB position with the assumption that the number 1 pick is Lawrence, we can easily see a scenario where this offense is primed for explosion in 2021.

Now that we have some of the evidence laid out for what the perennial under achieving Jaguars can be in 2021, let’s highlight some players who Fantasy players can invest in this offseason for maximum returns.

This article is a Laviska Shenault tribute! His draft stock took a hit with an array of injuries in his 2019 college campaign as a Colorado Buffalo. When healthy, his production was off the charts during the 2018 season where he had a 26.2-percent Target Share at Colorado to go along with a 78.2-percent Catch Rate. His 19.9 Breakout Age is a 67th-percentile mark, and historically carries a 31.3-percent hit rate for WRs in that breakout age category (the second-highest hit rate for age specifications).

The Code Breaker Ep. 2: @jlarkytweets is back to breakdown @breakout_finder favorite Laviska Shenault 🚀

Shenault’s rookie season was filled with inconsistency due to the revolving QB door in Jacksonville and the anticipated acclimation to the pro game. However, over the last four weeks of the 2020 NFL season, his Snap Share and Target Share rose considerably as he was more integrated into the offense. While he might not be the typical alpha receiver in this offense, Urban Meyer showed an affinity for specialized players to have a huge role in his collegiate offenses. If we look at the historical success of Percy Harvin and Parris Campbell, we can make a rational assumption that Shenault will be utilized similarly given his electric skillset with the ball in his hands.

PlayerProfiler’s Best Comparable Player for Shenault is A.J. Brown, and we have all seen what getting the ball into his hands has done for the Titans offense over the past two seasons. If Meyer can combine manufactured touches in a wide open spread concept along with short to intermediate routes that are predicated on deep passing schemes that stretch the defense, Shenault could easily put up fantasy WR2 numbers. A season with 60-70 catches along with 50 rushing attempts and over 1,000 scrimmage yards is certainly in play. In startup drafts, he’s currently ranked between WR 35-40. That makes him a WR4 that can most likely be had for a mid-to-late second-round rookie pick, giving up the likes of a Tamorrion Terry  or Elijah Moore, whose landing spots we do not know. Go and get Shenault and reap the benefits. 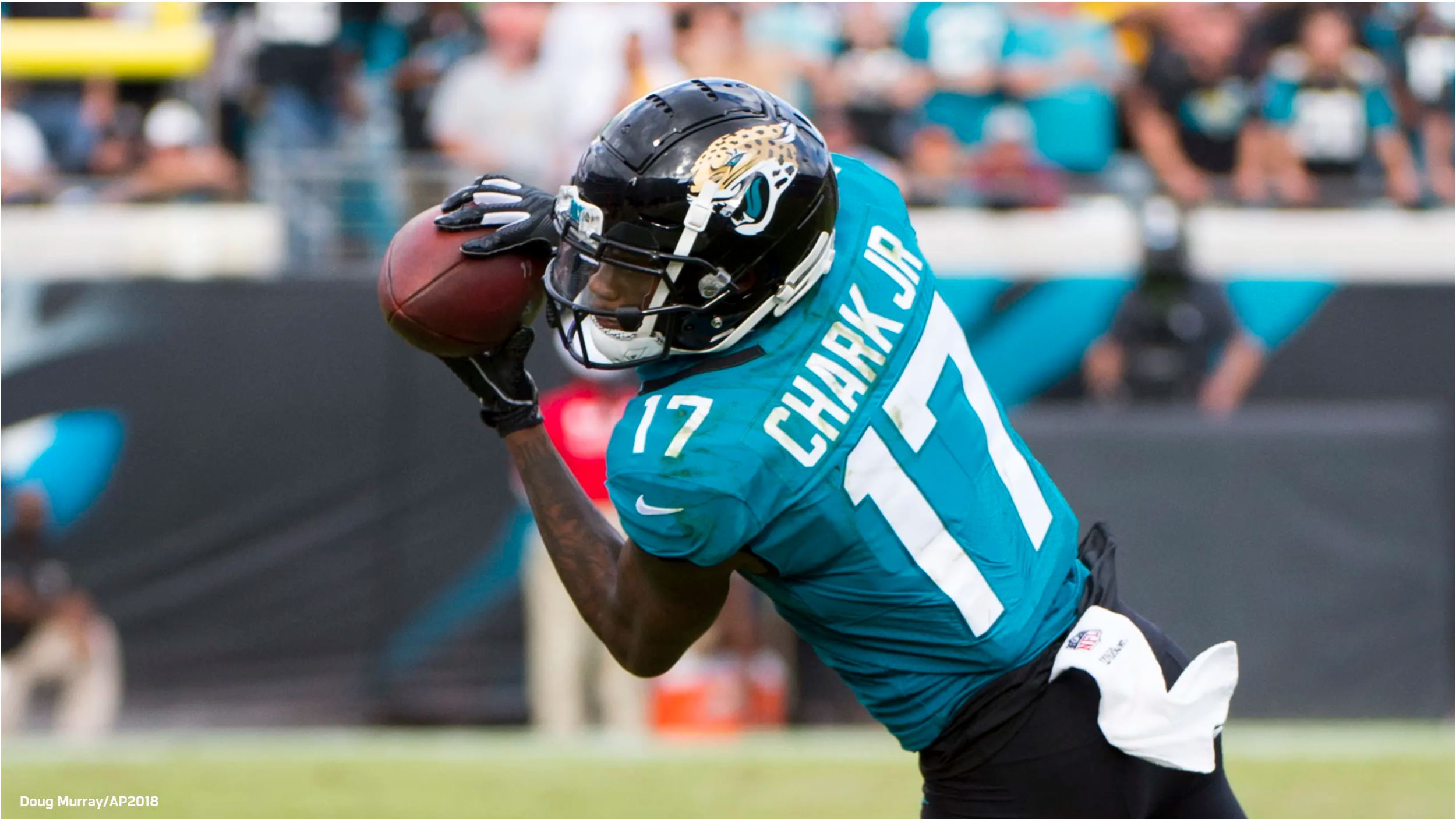 Who is going to be the prototype WR in Jacksonville? Look no further than the guy who has done it behind shitty QB play the past two seasons. After his sophomore season breakout, D.J. Chark’s season was derailed by Minshew Mania’s regression and injuries. Chark recorded 756 (No. 9) Unrealized Air Yards and only had a 70.2-percent catchable target rate of 70.2-percent (No. 91) Catchable Target Rate. Given all of the hurdles, Chark was still able to put up league-winning weeks.

In this iteration of Jacksonville’s offense, look for Trevor Lawrence to target the athletic specimen often. In his three years at Clemson, he targeted his leading outside receiver on 17.7-percent of his attempts. Though a few percentage points lower, the accuracy and quality of these targets will create ample opportunities for Chark to thrive with Lawrence under center. Chark also has innate ball skills that will earn his QBs trust. Being valued in the WR35 range, Chark is another receiver who can be acquired with an older veteran playing his way out of the league (perhaps Adam Thielen or Odell Beckham) or another mid-second-round rookie pick.

Urban Meyer feeds his top RB’s. Last year, with an elite workload, James Robinson was fantasy football best value pick: leading the league in Opportunity Share, averaging 17.7 (No. 5) Fantasy Points per Game, logging 1,070 (No. 5) Rushing Yards, 79 (No. 5) Evaded Tackles, and 423 (No. 6) Yards Created. All while scoring 10 (No. 10) Total Touchdowns on one of the worst offenses in the league. Is a repeat performance in line? Or is Robinson destined to follow the same one year wonders like C.J. Anderson, Peyton Hillis, Eddie Lacy, or Ricky Martin.

Most Scrimmage Yards all-time by a UDFA Rookie RB 🚀

Well if you’re willing to live la vida loca for just a moment, imagine a more efficient offense where Robinson is given an equal workload behind a more improved offensive line. This is the kind of situation where he can potentially lead the league in most RB categories. That kind of player must be expensive, right? No. He is being valued at the RB19-20 in start up dynasty leagues. At age 22 with an 89th-percentile SPARQ-X score, 98th-percentile College Dominator Rating, and no current challengers on the roster to his position as lead back, he should be valued in the RB10-15 range. What RB can give you that kind of league-winning upside that is available for a late first-round pick or even a couple of second-rounders?

Time’s up. The answer is JAMES ROBINSON.

Take him to the bank.

For being one of the worst teams last season, the Jacksonville Jaguars are an absolute goldmine for finding and harvesting value in your dynasty fantasy football leagues.