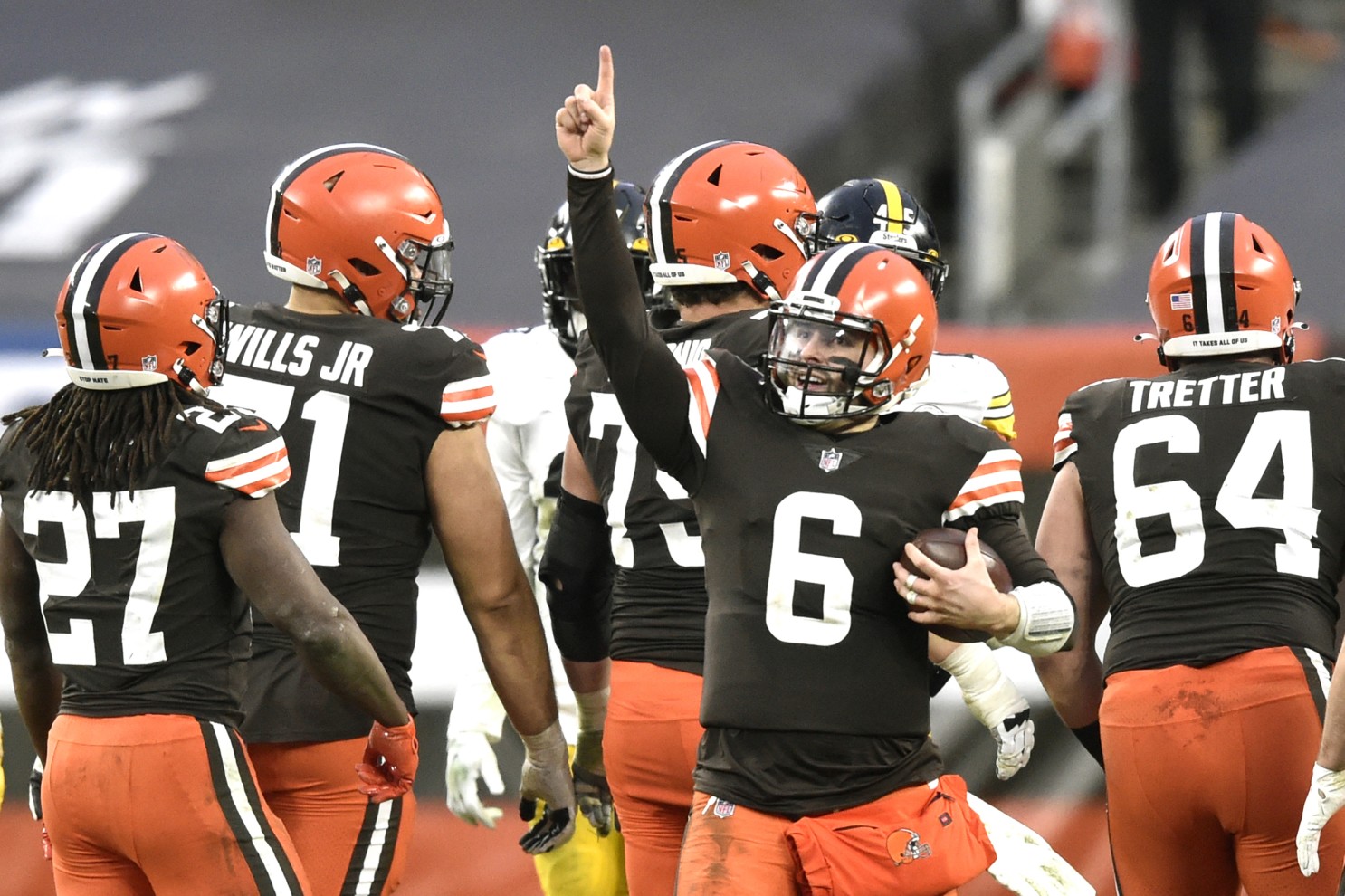 I always get a lot of slack for being a Chiefs fan growing up in Cincinnati.

For a while there, dark days were upon the Chiefs, and the Bengals were a franchise on the rise. Cue Carson Palmer’s injury and the tides seemingly shifted, sending the Cincinnat football team into disarray and putting the franchise back ten-plus years.

With the Browns and Bills snapping their playoff droughts, the Bengals have now gone thirty (30) years without a playoff win.

For all of the Bengals supporters back home: Your time is coming. Stay strong, and tell the front office to take the advice that I’m about to dish out and you’ll surely win a couple more games — trust me.

As a reminder: This series piggybacks on Dan Jolly’s excellent division-by-division work that he’s been laying out for all the diehard dynasty gamers. I’m just filling in the blanks; let’s get after it again. 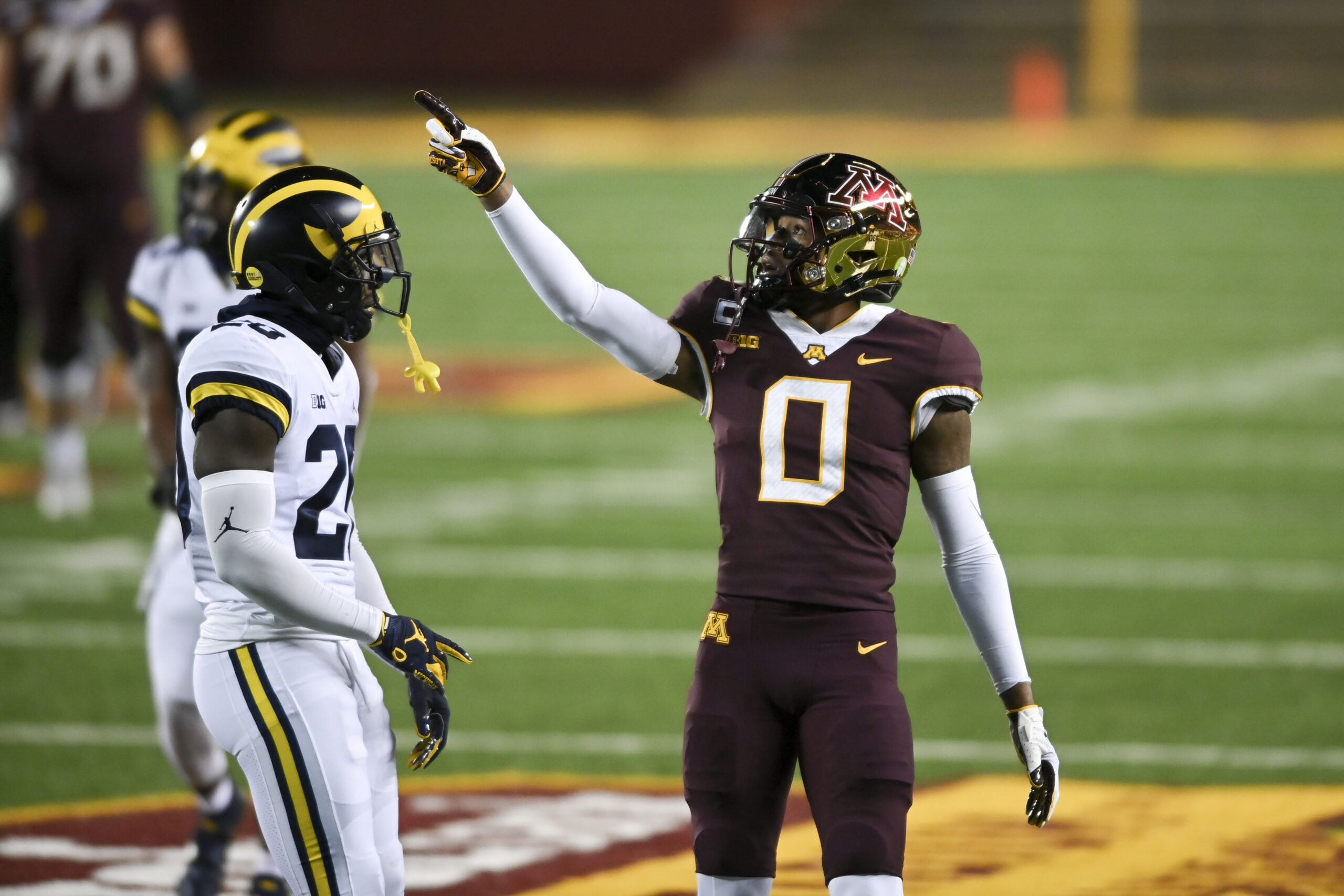 I want to be the first to admit that when Lamar Jackson won the Heisman over Dede Westbrook, I was seething.

I publicly came out and said Jackson would be a terrible NFL quarterback. The Ravens then trade-up, draft Jackson, and well, the rest is history to this point.

However, there’s not much help to go around in the Ravens’ offense. Like I said for the Bills, the Ravens are in danger of becoming terribly one dimensional. The Ravens, as a whole, threw for 2,919 yards (32nd in the league), while rushing for 3,071 yards (1st in the NFL).

Now, this has a lot to do with the way that Greg Roman runs this offense and calls plays — gap in talent and options aside. Yes, Mark Andrews is a top-5 tight end and “Hollywood” Brown is an amazing player with game-breaking speed, but after those two, there just isn’t much to get excited about.

The good news for Ravens fans is that this 2021 wide receiver class that’s incoming is incredibly deep, and the free agent pool is similar. The Ravens have an estimated $20 million in cap space, so I don’t expect them to make a huge splash at the position in free agency, but drafting a receiver should be an obvious priority.

The Ravens lack a big-bodied receiver, one who runs great routes, has sure hands, and makes great plays after the catch.

Rashod Bateman can do all of that and more. Bateman was utilized on a lot of in-breaking routes and zone schemes at Minnesota, but his skill-set doesn’t stop there. He does not have elite speed, but he doesn’t need it. His footwork and agility allow him to deceive defenders and create just enough separation that when he goes up for the ball, he comes down with.

His ability to create yards after the catch is remarkable as he consistently fights for every single yard. Baltimore already has a burner, so now it’s time get a true “no. 1”, and this offense will look to make leap to “well-rounded” status and enjoy the fireworks that surely will follow. 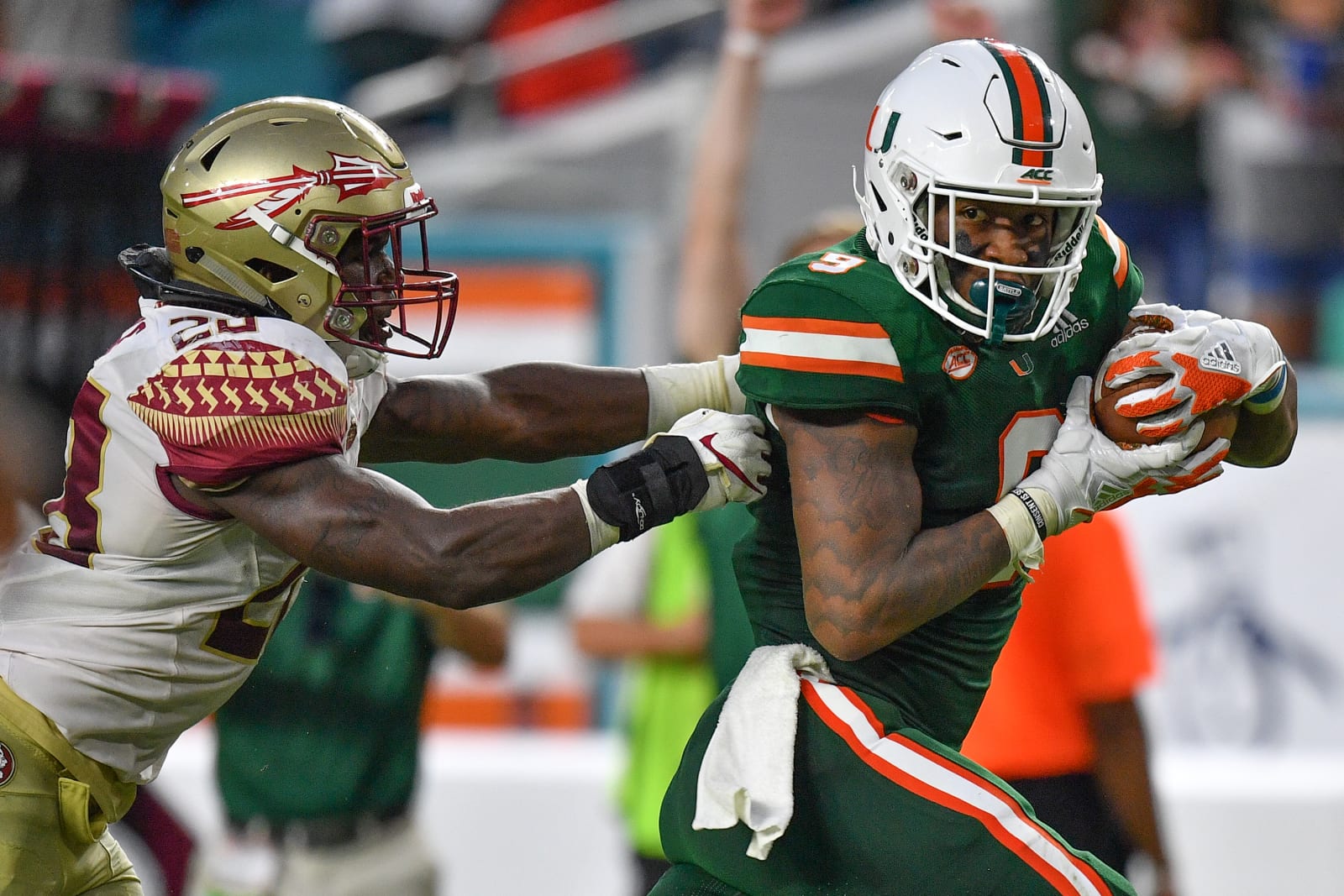 What a great career for A.J. Green it has been, but it is seemingly coming to an end in Cincinnati.

The Bengals drafted the heir-apparent in Tee Higgins, and they’ve gotten exceptional play from Tyler Boyd.

Joe Mixon should bounce back (we hope), and similliary said for this offensive line which should be improved to protect now sophomore throwerof-the-football Joe Burrow.

Where does that leave the tight end position? Drew Sample is very clearly not the answer and there aren’t any other options on the roster that can help or lead to resolution. The Bengals have been searching for that game-changing tight end to bring back the days of old when Tyler Eifert was setting the world on fire.

Eifert’s best seasons were his rookie campaign in 2013 and after being injured in 2014, he turned in a Pro Bowl year in 2015. How did the Bengals fare those years? 11-5 and 12-4, respectively, while finishing 1st in the division both times and going to the playoffs.

Now, I’m not saying that Eifert was the key to this offense as he never led the team in receptions or yardage, but he was a dynamic play-maker at that position. Defenses had to account for him and would often lose track of Green or the other pass-catchers. We need the Bengals to get better at the tight end spot.

Yes, Kyle Pitts is a generational talent, but let’s be real: You’re not taking him at 5 overall with your offensive line issues, and he surely won’t be there at 37.

You know who will be there? A 6-foot-3, 245 pound behemoth of a man that not only lines up as an in-line tight end, but also in the slot as well. Jordan was overshadowed this year by Pitts, but make no mistake, this man is dynamic.

He’s obviously big enough to outmuscle linebackers and defensive backs, but his ability after the catch is what sets him apart. He is very difficult to bring down and has very good reactions where he can adjust to almost any ball that is thrown. His blocking is also exceptional which makes him the next Swiss Army knife in the league.

Don’t overthink this one, Mike Brown. 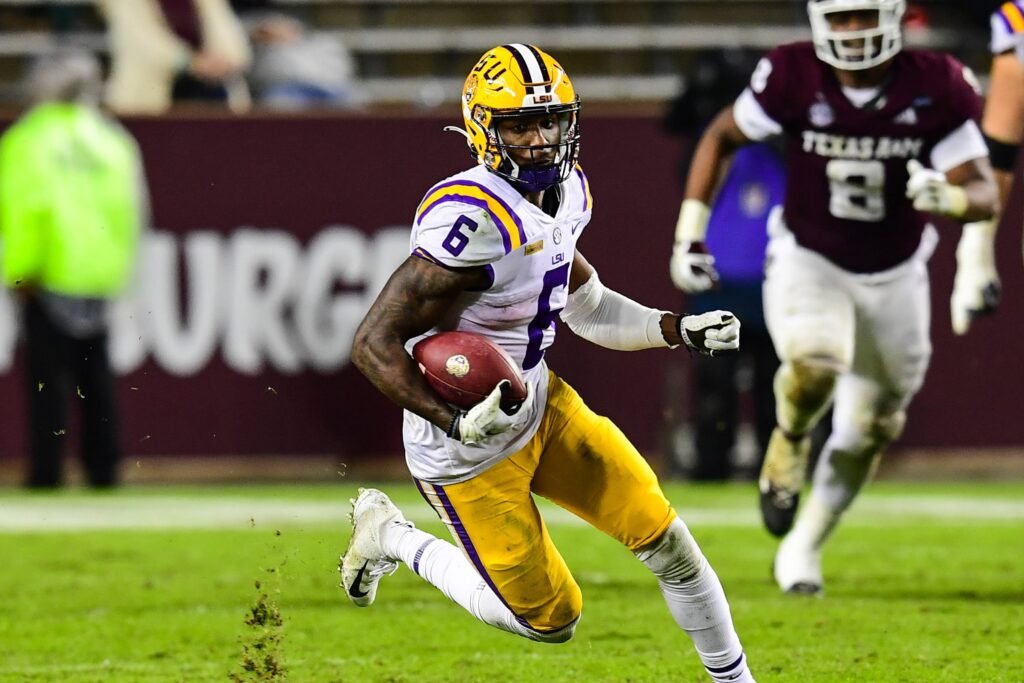 The Browns are going to be good and they are going to be good for a long time. We saw them piece together just an incredible turnaround this year by bolstering that offensive line, hiring a coach that played to their strengths (running the ball), and creating a more competent defense.

Pairing former Louisiana State teammates Jarvis Landry and Odell Beckham Jr. seemed to be a match made in heaven with up-and-coming quarterback Baker Mayfield. But, as we now have seen, Beckham’s career seems to be on the decline as he can’t stay healthy and when he is healthy, he just isn’t the same dynamic, big-play receiver we’ve come to love (or hate, if you’re a Giants fan).

The Browns need a new receiver that won’t expect a dominant share of targets, but can also provide a spark to this offense alongside the still impactful Landry.

It’s crazy to believe that this was the “forgotten name” behind stars (and fellow 2021 rookie) Ja’Marr Chase and current Minnesota Viking Justin Jefferson at school.

The great thing about Marshall is that he is fantastic out wide or in the slot due to his size and ball skills. The route running is already there, but the downfall and “knock” might be his competency as a blocker. He may be called upon to block more for Cleveland due to the run-first scheme, but the talent is there. This feels like an easy call. 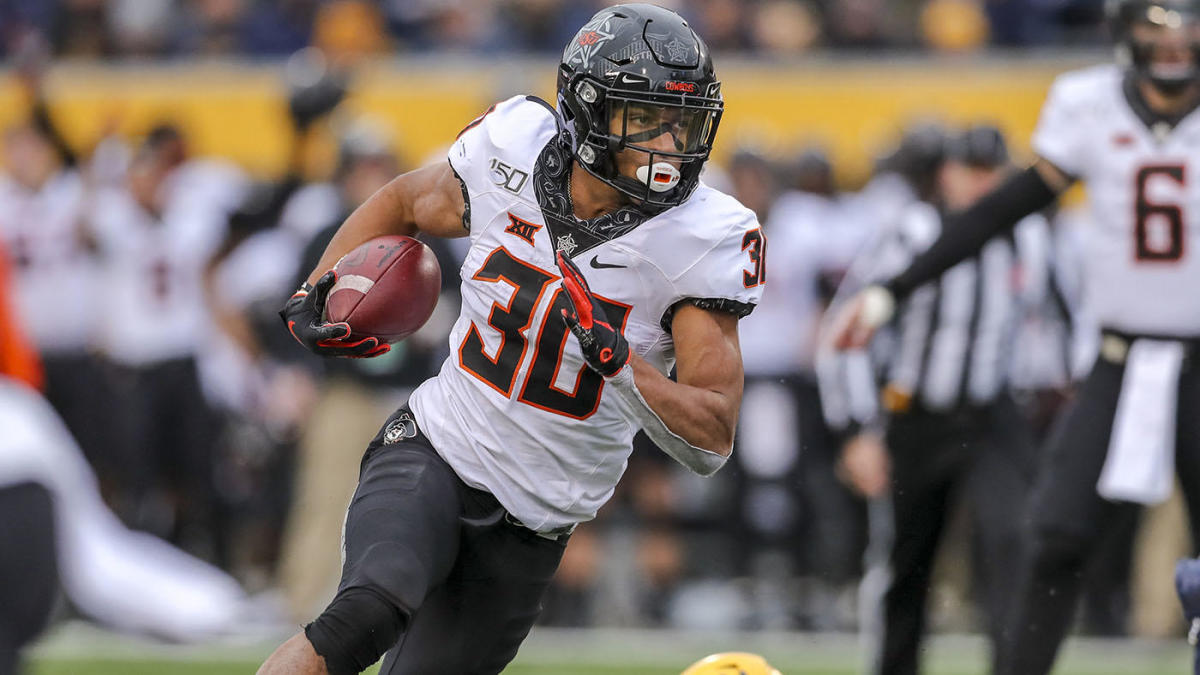 Growing up in Cincinnati, you are taught to do two things: 1) Eat the decadence that is Skyline Chili and 2) hate the colors black and yellow.

The reality is, the Steelers have been one of the more consistently good teams for a while now. Sure, they faltered at the end of this year, but man oh man, has it been good to be a Steelers fan.

Now, more of the bad: The Steelers ranked dead-last in rushing yards this year (1,351 yards). Does everyone remember when James Conner was supposed to be a top-5 running back in fantasy football?

Unfortunately, injuries just took their toll and he never could stay healthy. Conner is now a unrestricted free agent and I assume he won’t be back in Pittsburgh. Benny Snell Jr. was supposed to take the reins and never look back. After a Week 1 performance of 19-113-0, where he averaged 5.9 yards a carry, he quickly fell back to Earth. In the final 14 games (missed 1 due to injury) of the regular season, he posted a 92-255-4 rushing line where he averaged 2.77 yards per carry.

That won’t cut it.

Hubbard is a 208-pound back with easy, track speed. He is one of the more patient runners in the nation as he has the ability to wait for a lane to open. The vision that he has allows him to turn “nothing” plays into “something” plays, and once he gets past the line of scrimmage, look out. The aforementioned wheels are obvious.

The only issue with Hubbard is his prowess as a pass-catcher as he does not have the most reliable hands. He only had 8 receptions this past year which doesn’t bode well for third-downs. Pittsburgh has a plethora of pass-catchers that can flash when the ball is in the air, but this offense needs someone to do the work in the trenches, and add an explosive element to the ground game once more. Hubbard is your guy.