Dynasty Outlook: 10 Rookies From the 2020 Class To Acquire 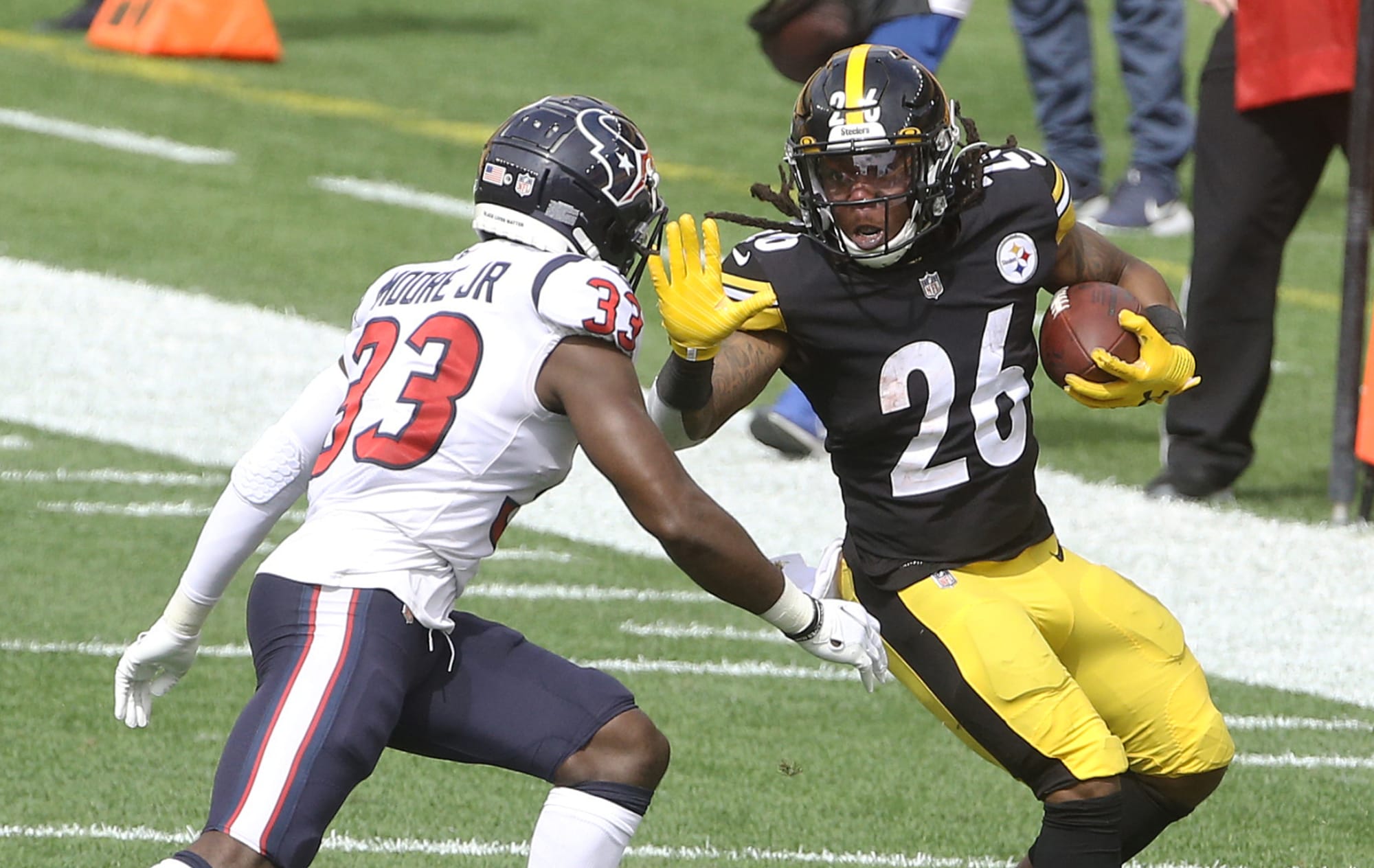 Another fantasy football regular season has come and gone.

The 2020 rookie class was one that saw many rookies have impressive debuts; it saw several early breakouts, but not every player can have a successful first year in the NFL. Many of these players did not pop or produce quite as much as originally thought or projected, but one season is too little to warrant much worry.

Below is a list of ten such players with impressive PlayerProfiler and/or BREAKOUT FINDER advanced metrics and stats that are certainly worth going after in dynasty leagues — and likely names that can be acquired for a bargain price. 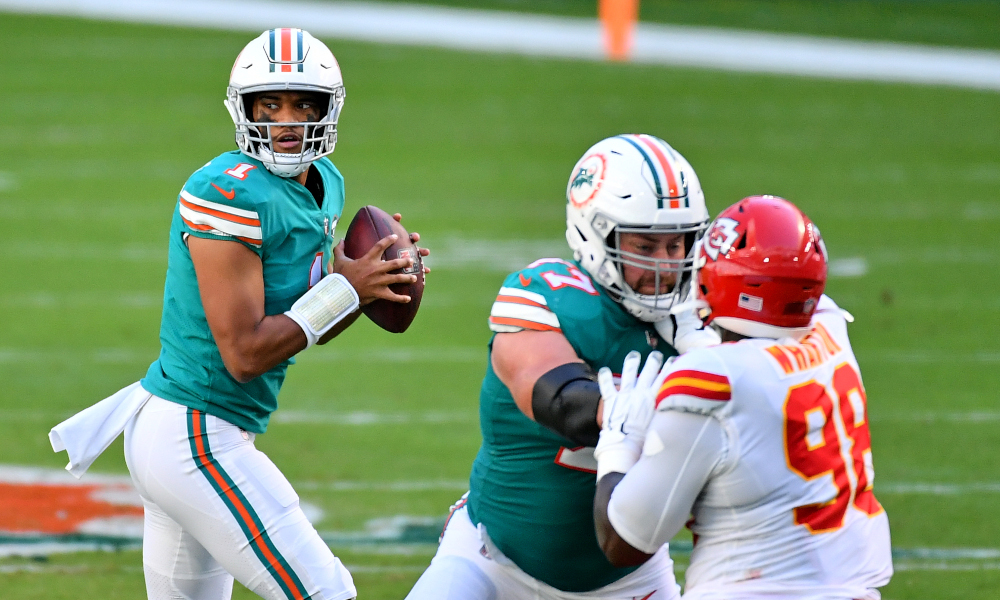 Tua Tagovailoa had a bit of an up-and-down rookie season. What’s more, with the news surrounding him and potential Deshaun Watson trade rumors, he is now likely cheaper then he was preseason.

Coming off of a serious lower-body injury after being prolific in college, Tagovailoa wasn’t even supposed to play this past year. His top three receivers were either battling injuries, out for the year, or just not talented enough; Miami has the draft capital and money to get him some legitimate weapons in the offseason.

Tagovailoa ranked No. 3 among qualified quarterbacks with an 80.3-percent Catchable Pass Rate and No. 2 with a 7.9 Accuracy Rating. Despite ranking near league-bottom with a 5.8 (No. 29) Adjusted Yards per Attempt average and 2,292 (No. 29) Air Yards, don’t fade him yet because his supporting cast may change for the better in a hurry.

He may suddenly be throwing to Ja’Marr Chase, or any other of the talented 2021 receivers, plus one or more of the big free agent names available (Chris Godwin, Allen Robinson, etc) instead of just DeVante Parker.

He had a game this season where he showed 30 fantasy point potential. Yes, he wasn’t steady as a rookie, but that means it hopefully can only get better from here and he can ascend to true QB1 status.

A late-first round round Superflex pick, or a young reciever and another quarterback can be paired to grab Tagovailoa in most single-quarterback leagues.

An underwhelming rookie season leaves Joshua Kelley in a bad spot. He squandered countless opportunities to produce and never did anything significant. He should have emerged with Austin Ekeler injured and never did. However, there are some positives, with his cheap price being one.

Kelley’s most intriguing stat was that he caught all 23 of his targets in the passing game. That small stat is significant enough to not be completely out on him yet. If he can catch out of the backfield, he will find a role as he matures in the league. His profile is still rock solid, boasting upper-percentile marks in almost all of PlayerProfiler’s workout and college production metrics, with the exception of Burst Score and College Yards per Carry.

A player that checks most of the boxes and has good size at 212-pounds is still worth taking a chance on, especially being tied to Justin Herbert. Kelley still has the potential to deliver solid RB2 potential, and it might only cost a late rookie pick to get him now.

Unproductive rookie seasons can happen for plenty of reasons. Being a rookie in a Tom Brady-led offense likely had a lot to do with Ke’Shawn Vaughn‘s. With Leonard Fournette likely leaving in free agency and Ronald Jones being ineffective in the passing game, Vaughn will automatically step into a role in his second year.

Vaughn was solid as a freshman in college, showing rushing and receiving ability, but really proved his talent when he transferred to Vanderbilt. In the juggernaut Southeastern Conference, he rushed for over 2,200 yards and caught 40-plus passes in two seasons. His 40.4-percent (90th-percentile) College Dominator Rating and 10.0-percent (74th-percentile) College Target Share show off his all-purpose skill set in a big way. His 103.5 (74th-percentile) Speed Score shows he has some size-adjusted juice to go along with his all-purpose potential, which makes him a potential RB1 in fantasy football.

Vaughn will likely still cost a late first round/early second round rookie pick, but he was going in the mid-first round in most 2020 rookie drafts. It’s best to grab him now before Fournette is officially gone, and bet on the profile to succeed. 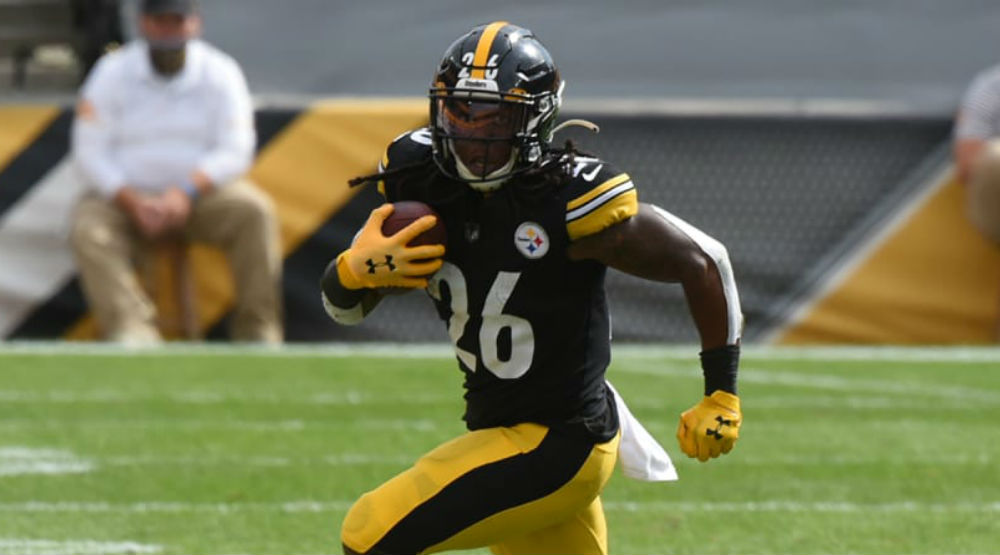 Speed doesn’t mean everything, but speed can change the game and lead to big plays. The Pittsburgh Steelers are desperate for speed at the running back position. Good thing they have a player with some serious wheels already on the roster. The Steelers averaged a near-league-bottom 23.3 (No. 28) Team Run Plays per Game and a near-league-high 41.9 (No. 2) Team Pass Plays per Game. James Conner‘s 4.65 (31st-percentile) 40-yard Dash speed, 105.8 (5th-percentile) Burst Score, and 11.72 (18th-percentile) Agility Score are not getting the job done anymore. He is set to become a free agent, meaning big opportunity in 2021 for McFarland.

Though he has a 1,000-rushing yard freshman season and a 17-reception campaign on his college resume, McFarland is unproven as an all-purpose back with only two seasons of college production and fewer than 140 touches in both. This may justify his lackluster rookie season since he is without as much experience as prospects usually have. However, the receiving ability is there and it’s hard to ignore his greatest asset: speed. With a year to get acclimated to the NFL, he will be a serious threat if Mike Tomlin can harness this 4.44 (91st-percentile) speed at a solid 208-pounds.

McFarland can likely be acquired for a late rookie pick and his ceiling is high-end RB2 in fantasy.

The trend of speed being available at a bargain continues with Quez Watkins. DeSean Jackson and Alshon Jeffery are aging and frequently injured. John Hightower had a somewhat promising profile, but did nothing with his 2020 opportunity. J.J. Arcega-Whiteside is almost officially done already. Travis Fulgham looked like a diamond in the rough until he was dialed back for some reason. Jalen Hurts needs playmakers and Watkins has the speed to make those big plays, even showing some of that upside this season.

In his rookie season, Watkins only had 7 (No. 156) receptions on 13 (No. 152) targets, but he was electric the few times he got the ball in his hands. The eye test and his speed were more impressive than anything Hightower or Arcega-Whiteside have done so far with much less opportunity. With 4.35 (98th-percentile) 40-yard Dash speed, and a 124.6 (69th-percentile) Burst Score to match, he can torch defenders. He was an early declare, which helps him get acclimated to the NFL faster than if he was still playing college ball. If he can continue to make plays with the ball in his hands, new Eagles head coach Nick Sirianni can make him his new, younger version of T.Y Hilton.

Watkins can be acquired inexpensively and has the juice to put up mid-range WR2 numbers.

Denzel Mims is no guarantee to hit his potential on the New York Jets. Coach-centric analysis is a misleading process, but Adam Gase’s departure and the intriguing addition of Mike LaFleur should pay dividends. A Justin Fields addition would also help. If the Jets trade for Deshaun Watson, Mims’ ceiling would skyrocket. He’s arguably the top buy-low candidate in all of fantasy football because of his potential ceiling.

Mims is a dream receiver based on PlayerProfiler metrics. He has elite-level college production and size-adjusted athleticism. Being plagued by poor quarterback play throughout the year helped him “achieve” a -17.6-percent (No. 99) Target Premium. Combined with the myriad of injuries he suffered to begin his career, his situation can’t get much worse. Even a Sam Darnold improvement would grow his fantasy stock.

Mims’ advanced metrics provide proof that his upside is a true WR1 in fantasy and skeptical owners are likely selling for a late first or second-round rookie pick. He is one of the few prospects who checks nearly every advanced metric box and this may be the only opportunity to acquire him at a discount. 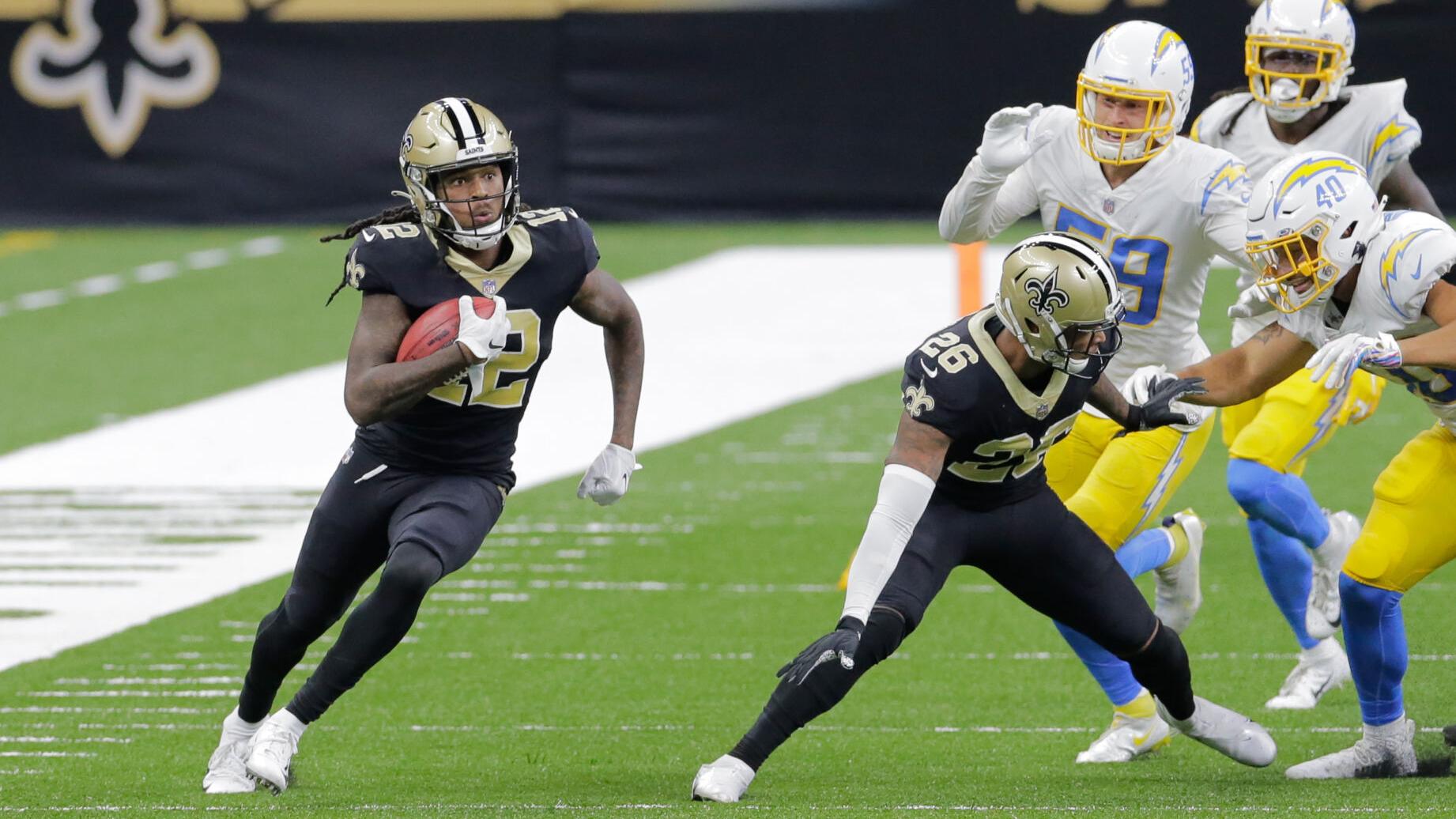 Marquez Callaway does not have draft capital, but proved he can play wide receiver in the NFL. He had a week commanding ten targets as an undrafted rookie. For fantasy potential, a Jameis Winston takeover in New Orleans may actually give the wide receiver group a boost as a whole. Callaway somehow slipped through the cracks of the NFL Draft despite a 19.4 (80th-percentile) Breakout Age and a 127.6 (82nd-percentile) Burst Score. Having also returned punts in college, he brings with him some dynamism.

Callaway shouldn’t be pursued in shallow leagues since he lacks draft capital, but has some favorable metrics for deeper leagues where finding WR value becomes tough.

Ties to Justin Herbert are the big pull here, but Joe Reed has some impressive metrics that are likely to yield future fantasy success. Coming into the league after a four-year college career, he was expected to carve out a bigger role as a rookie, but was basically a complete zero except for one touchdown run showing off his dynamism. This is concerning considering fringe players like Jalen Guyton, Tyron Johnson, and K.J Hill all got snaps and chances ahead of him.

All is not lost with Reed yet. His 4.47 (74th-percentile) 40-yard Dash time at 224-pounds nets him a 112.2 (94th-percentile) Speed Score, the third-highest in the 2020 class. His Breakout Finder metrics give him a chance to earn more snaps and playing time going forward. His 78.0 Dynamic Score was among the best in the 2020 class. The Virginia product is the only FBS player in history with over 2,700 kick return yards along with a career return average of 27-plus yards. He also is one of only ten players in FBS history to have over 3,000 kick return yards.

Reed’s Speed Score and dynamic ability give him the potential to be a future WR2 in fantasy tethered to Justin Herbert. He can likely be acquired for almost nothing in dynasty leagues.

Bryan Edwards is the king of Breakout Age, his 17.8 mark being the highest in the Breakout Finder system and second-highest in the PlayerProfiler database. His 48.4-percent (94th-percentile) College Dominator Rating, second in the class, is incredible considering he was dominating in the SEC at 17 years old and competing for targets with Deebo Samuel. His 51.5 Breakout Rating was third in the class, and all signs point to him being a potential alpha-level receiver. His rookie season was underwhelming due to injury and not once logging a Snap Share over 40.0-percent after Week 3. He actually impressed when he played, his 17.5 Yards per Reception showing off his talent.

If Denzel Mims is close to the top of the list of best buy-low candidates in fantasy football, Edwards is right there with him and a late second-round rookie pick would be a bargain.

Savvy fantasy gamers know it takes tight ends time to break out in the NFL. There are fantasy owners who can’t wait that long, or still haven’t heard of Adam Trautman. He didn’t show much in his rookie year, but his Snap Share spiked at the end of the season when real games mean the most. He had three games over the final six weeks where he logged a 60.0-percent-plus Snap Share.

Trautman has TE1 upside coming from Dayton University where he posted a 38.1-percent (97th-percentile) College Dominator Rating and a 19.6 (86th-percentile) Breakout Age. He also comes with 95th-percentile agility, which tight ends can use to operate in the middle of the field. PlayerProfiler has dubbed him Captain America, and Captain America is a player you want on your fantasy football team.

Tight ends are hard to come by, but Trautman still might be available for somewhere around a third-round rookie pick.