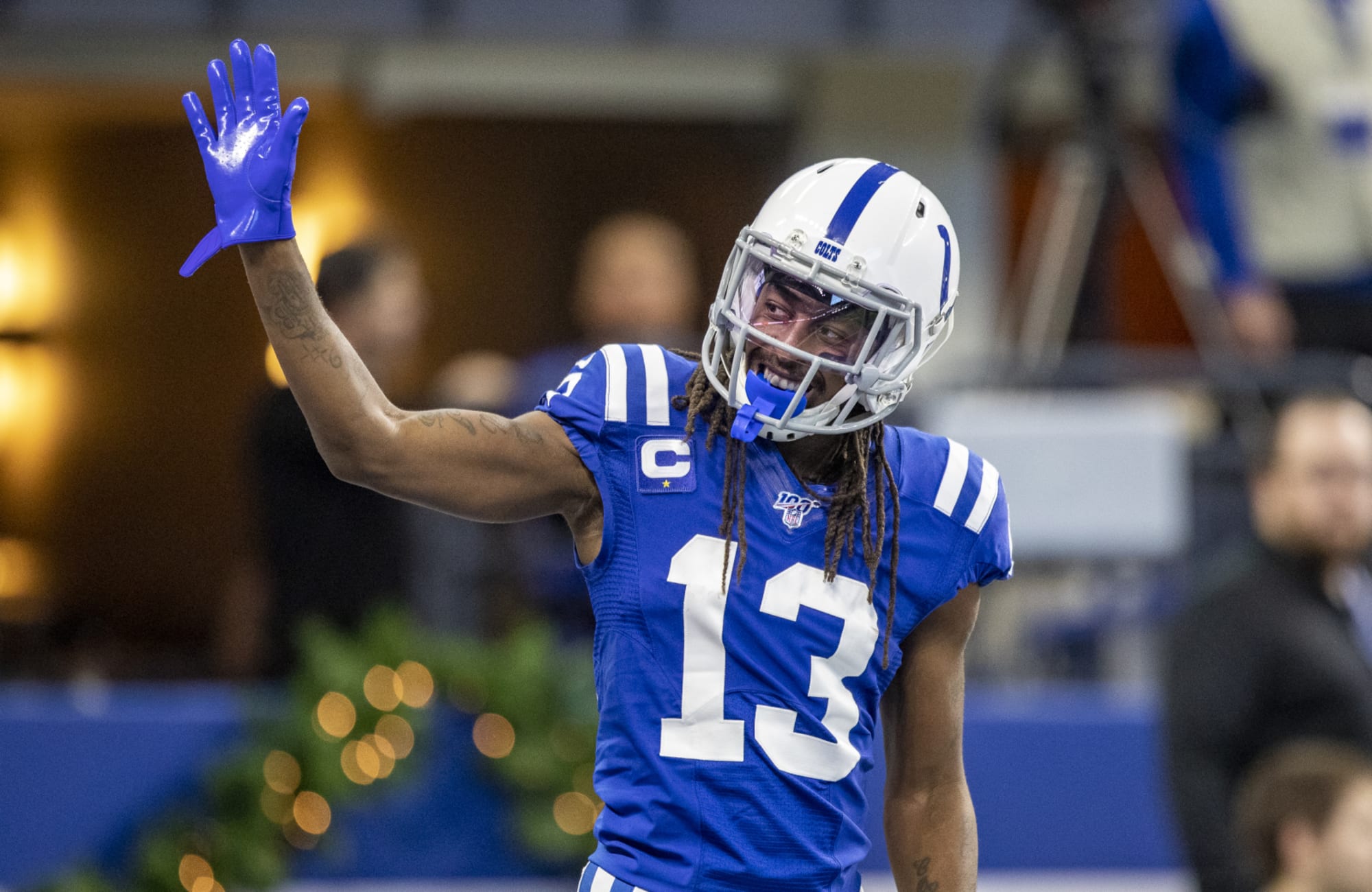 No matter the size of your dynasty league’s roster, it’s never large enough.

There are always interesting prospects to stash, always production to be unearthed. This is why I’m in favor of a taxi squad; it means that each space is valuable and important and shouldn’t be wasted.

For that reason, I can’t handle roster-cloggers; those players, because of age and talent , just don’t project to ever score many fantasy points. Roster-cloggers take treasured roster space away from players who, given the opportunity, could actually produce. They also prevent you from constantly churning the back-end of your roster, which is a key tactic in landing Mike Davis- or Myles Gaskin-type players who can make their way into your starting lineups, boost your overall point totals, and help you win championships.

Now, as the savvy reader that you are, you already know not to keep cloggers like Danny Amendola around. You either traded him after Week 1, or never had him to begin with, because he’s 34, has never accumulated over 700 receiving yards in a season, and has never scored more than four touchdowns in any given year. Amendola is too easy and obvious, and so we will identify three receivers who may appear to have some value left but belong on someone else’s roster, freeing you up to acquire coveted draft picks, even if they’re in the later rounds, and land all of the excellent waiver pick-ups that we identify for you each week.

Now this breaks my heart.

Hilton has always been a fun player with his blazing speed and small stature. He and Andrew Luck made for some great fantasy days. Unfortunately, the reality is that the old Hilton is gone. He hasn’t crested the 100-yard mark since 2018 when Luck was his quarterback. At age 31, there just isn’t much hopefulness moving forward, especially considering he has a 66.8-percent Injury Probability (No. 3) on PlayerProfiler.

Even counting on 2020 production seems a stretch at this point (much less 2021 and beyond). Now, I get that late-career Philip Rivers isn’t amazing, but Hilton has been awful across the board in the efficiency metrics: His Production Premium is a putrid -31.9 (No. 87), and Rivers has a QB Rating of only 51.9 when targeting Hilton (No. 98).

At this point, he’s not creating separation with only 1.34 yards (No. 79), and he isn’t creating after the catch with only 60 YAC (No. 62). It was a good run, but it’s time to let him run free (from your fantasy team) like he used to with Luck, especially with Zach Pascal outperforming him and interesting, younger prospects in Parris Campbell and Michael Pittman waiting in the wings once they recover from injury.

The former Kent State quarterback gave us a fantastic stretch from 2013 to 2019. Understandably, fantasy gamers were ready to ride it out another year given the splash offseason news: Cam Newton coming to New England. Edelman projected to be a target-magnet like he has been for years. And yet, through five games (only four with Newton), this hasn’t been the case. Yes, Edelman had a vintage performance in Week 2 going 8 for 179 against Seattle, but outside that contest, he has been lackluster-at-best. 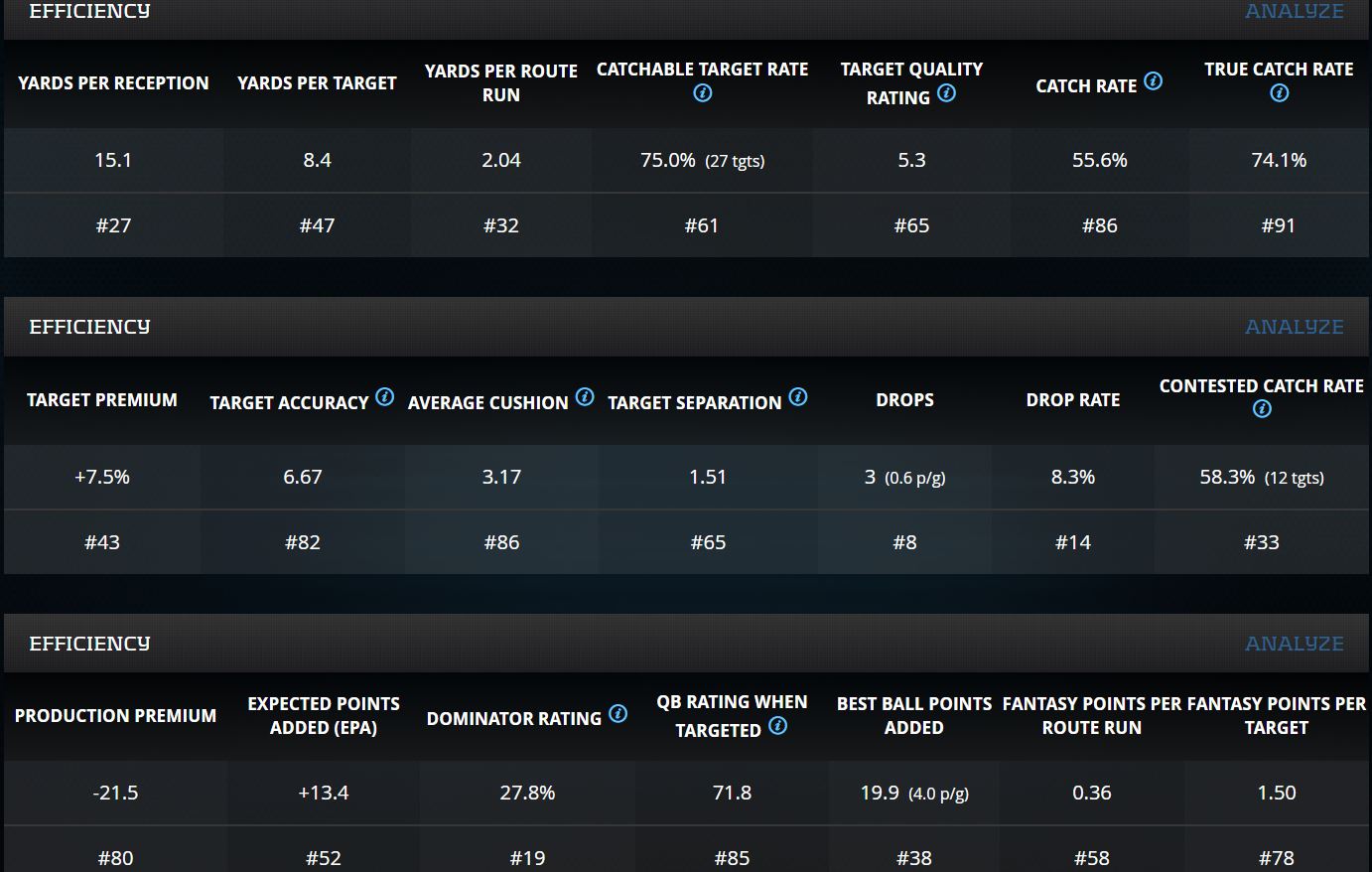 Admittedly, New England hasn’t been lighting it up through the air, so naturally Edelman’s raw numbers show that. However, where I’m most concerned is that Edelman isn’t demonstrating efficiency and isn’t even outshining his teammates. Edelman (-21.5 Production Premium, No. 80), N’Keal Harry (-31.1 Production Premium, No. 86), and Damiere Byrd (-10.7 Production Premium, No. 65) have all been underwhelming. Harry, though, has carved out the Red Zone Target role with 8 targets (No. 2), and both Harry and Byrd have True Catch Rates of 100-percent, whereas Edelman has struggled with drops early (3) and a True Catch Rate of 74.1-percent (No. 91).

There’s plenty of time for one of the three to emerge as the target hog, and I’m all for giving players time to adjust to a new quarterback, but at 34-years old, it makes far more sense to get what you can for Edelman, betting it’ll be one of the other two to take the lead (or honestly James White) and move on.

I’ll admit that I wasn’t a fan of Miller coming out of Memphis. He was an old rookie (he’s two years older than JuJu Smith-Schuster, to put it in perspective), with a late-breakout age (21.9), and playing inferior competition. To further paint the picture of his college profile, the Breakout Finder, gave him a Breakout Rating of 14.5. You know, right there in the Damion Ratley-range (if you don’t already have the app, literally stop reading this and go buy it, you’ll be a better manager because of it. I’ll wait… Ok, welcome back!).

Despite his poor profile, he rewarded the Bears for spending second-round draft capital on him and caught seven touchdowns as a rookie. Unfortunately, he has been clogging rosters ever since (not mine of course). Last year was a mess with Miller finding himself outside the top-40 in all key efficiency metrics, including an abysmal 78.4 QB Rating when targeted (No. 85).

Bears receivers coach Mike Furrey said he and Matt Nagy hope to get Anthony Miller a more prominent role in the offense.

Said Furrey: “As a fan of his and his coach and playing that position, we all know we’d like to have him involved more.”

This year hasn’t been much better, and even though his coach is handing out praise, the numbers tell us that the Bears are losing patience with him.

He has only logged a 55.8-percent snap share (No. 99), getting surpassed by rookie Darnell Mooney who has been out there for 64.8-percent (No. 86) of their snaps. He isn’t creating separation with only 1.31 yards (No. 82) and only has 41 YAC (No.92), all this despite mostly playing in the slot (84.4-percent rated) where hopefully he’d be able to find space to maneuver. If someone in your league is enamored with Miller’s draft capital and rookie season, now is the time to move him.