Finding the Next Alvin Kamara: Clyde Edwards-Helaire and Keaontay Ingram

Searching for the next Alvin Kamara is a tantalizing and tempting exercise, but it is also nearly futile. Very few players offer the combination of workhorse size, a dynamic repertoire of athletic tools, and elite versatility and ability as a receiver that Kamara displayed as a prospect. From a dynasty perspective, even fewer players offer all that in addition to the question marks and subdued value that come with the sort of mediocre collegiate production profile that Kamara had. 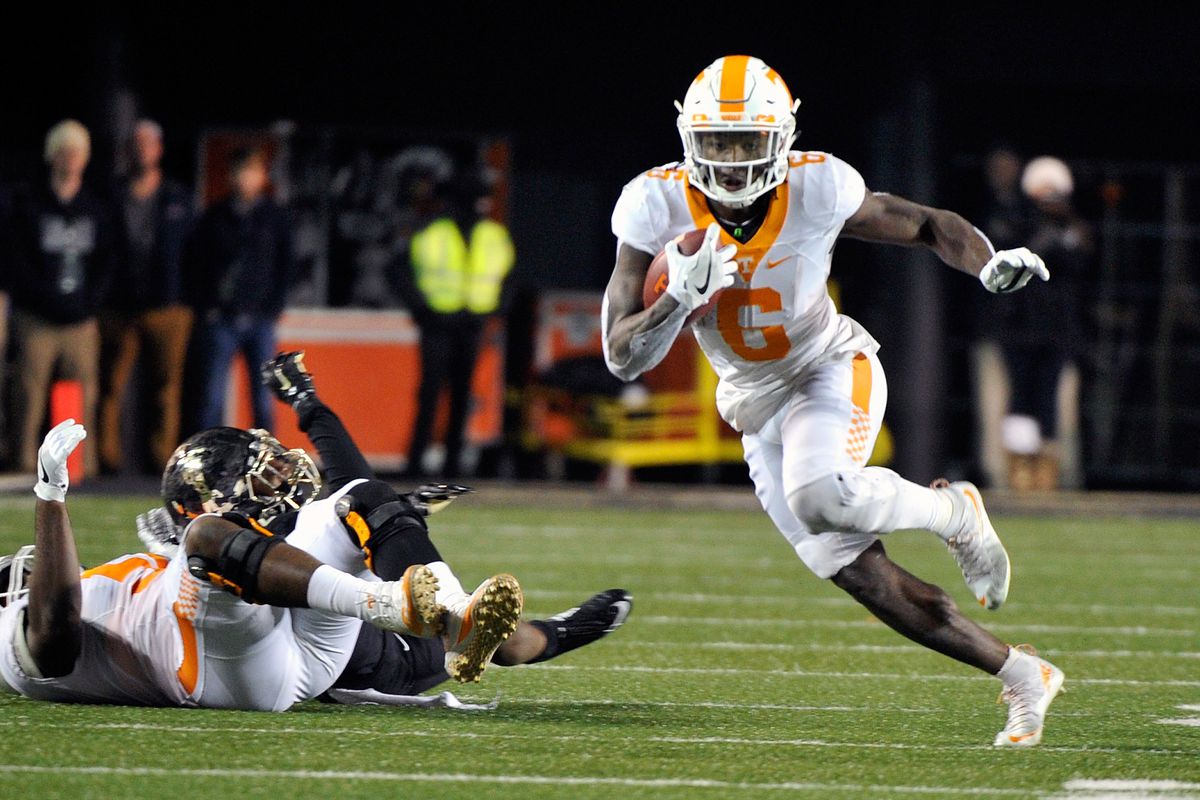 The best of us have tried and failed to identify such a player in the years since Kamara’s coming-out party in 2017. We’ve seen Darrell Henderson, Sony Michel, Josh Jacobs, and even Mark Walton all fall short of the promised archetype in recent draft classes.

In order to identify a truly proper comparison for Kamara, you have to find someone who occupies the center of the same quintuple-Venn Diagram of receiving chops, efficient running, workhorse body-type, sub-standard production, and valuation below the top backs in his class. By my estimation, there are only two post-2017 running backs who occupy that space. One is a full-skillset 2020 declare who burst onto the scene in his third year in college last season, and the other is a 2021-eligible back who looks the part of a Kamara comp, right down to the most superficial details of hair style and jersey color. 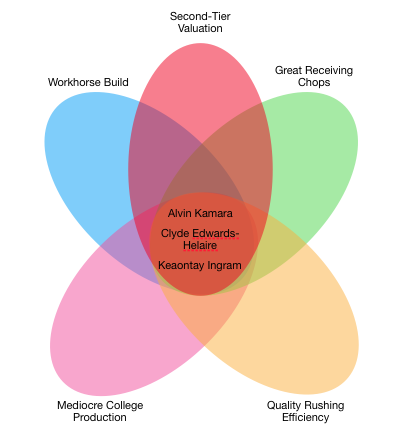 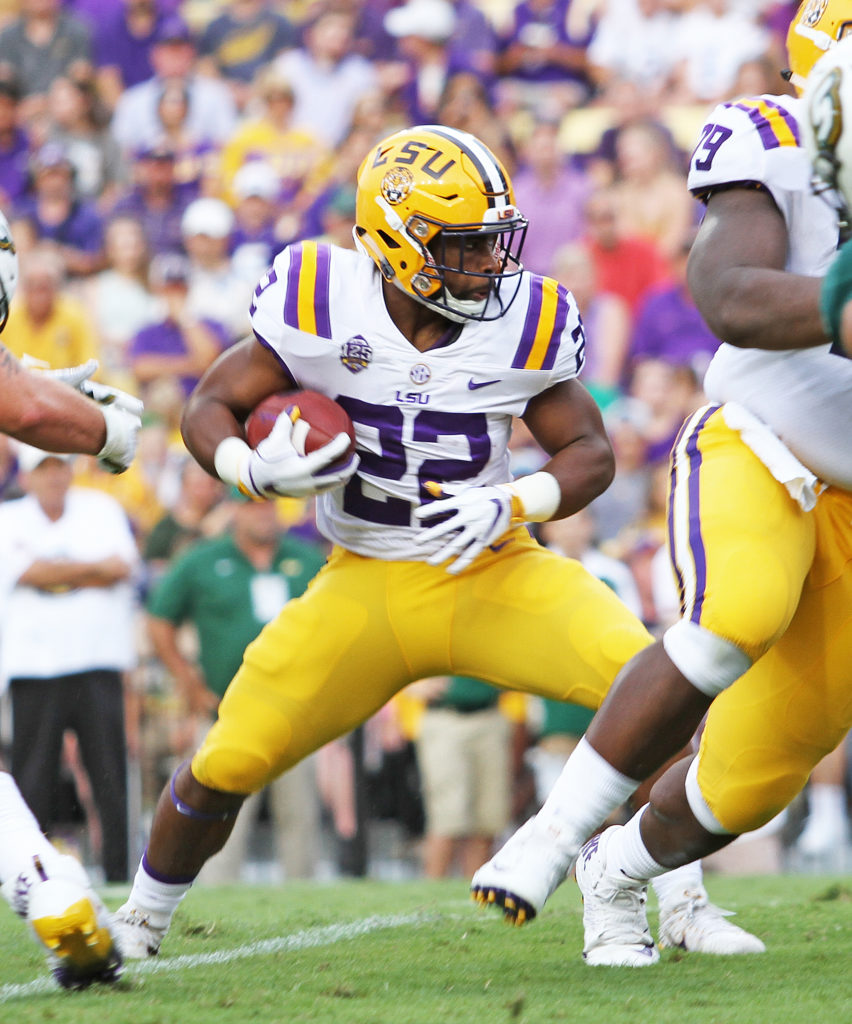 There is no player that my prospect model’s comp machine likens more to Kamara than former LSU Tiger Clyde Edwards-Helaire. While his 5’7″ stature gets him pigeonholed into Maurice Jones-Drew / Devonta Freeman / Ray Rice comparisons, CEH’s on-field resume as a college player is more robust than all of theirs.

Essentially what this handy chart tells us is, that despite being less efficient on a per-reception basis, Edwards-Helaire was more prolific and more relatively involved as a pass-catcher than the aforementioned historical comps. Likewise, he was a substantially more efficient runner relative to his teammates (and on far better teams than Rice or MJD played on). Those differences in their respective profiles are reflected in my model’s composite scores for each category.

In short, despite subpar production, Edwards-Helaire was a better college player as both a receiver and a runner than were Freeman, Rice, or Jones-Drew, and because of that, they are not the most appropriate comparisons for him, regardless of similarities in body type. Kamara, on the other hand, makes more sense. He and CEH were both pluses in the passing and running games in college, and where Kamara was a bit purer as a satellite back, Edwards-Helaire was the more efficient runner.

The two backs are also strikingly similar from an athletic standpoint. Each of them put up 15 reps on the bench at the combine, each of them posted burst score numbers in at least the 89th percentile, and Edwards-Helaire ran a 4.6 to Kamara’s 4.56 in the forty. Edwards-Helaire didn’t participate in the lateral agility drills, but it seems safe to assume he’s capable of matching Kamara’s 27th-percentile agility score. My model has CEH as Kamara’s fifth-most comparable player based purely on athleticism.

Zooming out and taking a holistic look at the two players’ profiles side-by-side, we see that they are similar in nearly every way. Sub-25% dominator ratings in the SEC, late breakouts, workhorse size (or BMI, at least), athletic ability, rushing efficiency, receiving numbers, everything. There’s a lot of crossover, and that’s reflected in my model’s similarity scores for the Kamara-to-CEH comp:

Both Edwards-Helaire and Kamara were/are valued in the second (or even third) tiers of their respective historically-great draft classes. Kamara had a rookie draft ADP of 1.10 back in 2017, behind the likes of Samaje Perine and O.J. Howard, in addition to that Fournette/McCaffrey/Mixon/Cook tier at the top. Edwards-Helaire is most people’s RB5 in this class, comfortably a tier behind Jonathan Taylor, D’Andre Swift, J.K. Dobbins, and Cam Akers according to consensus. He has even falls behind receivers Jerry Jeudy and CeeDee Lamb in some early mocks.

The move here is to simply learn from 2017 and not sleep on CEH. We’ve seen that sub-producers can succeed if they show top-end ability on the field, which Edwards-Helaire does. And we’ve seen sub-5’9″ running backs with the versatile skillsets succeed before, and Edwards-Helaire is the best prospect yet in that bloodline. He’s more Alvin Kamara than he is Devonta Freeman, and you should be selecting him in rookie drafts accordingly.

If Edwards-Helaire exists on one end of the workhorse-size spectrum that Kamara straddles, 6’0″, 220-pound Texas Longhorns running back Keaontay Ingram is completely positioned on the other end. If the Josh Jacobs experience has taught us anything, it is that, given requisite size and absent a concerning history of injuries, the assumption should be that players can handle bell-cow workloads in the NFL.

While Ingram has yet to post a seasonal dominator rating above the 18% mark, he has already touched the ball more times over two college seasons than Jacobs did through three. Hopefully, the workload silliness is beneath him. Nonetheless, the relative lack of production is a key part of what aligns the Ingram profile with those of guys like Jacobs, and especially Kamara. 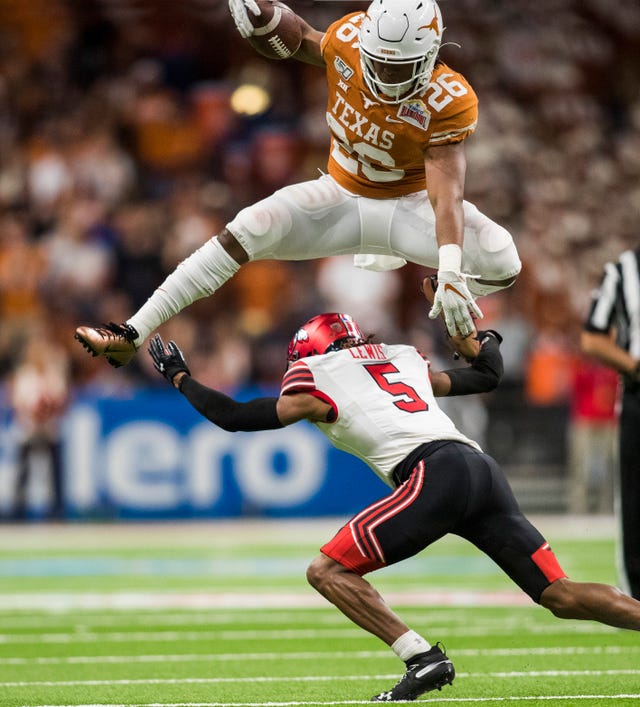 Ingram is also very Kamara-like from a skillset point of view. As a receiver specifically, he is sort of Kamara-lite:

Rare is the player who can match the former Tennessee Volunteer’s raw production as a pass-catcher, and Ingram does lag behind Kamara in that area. Still, Ingram’s per-season receptions totals rank in the 86th percentile among all backs drafted since 2007. And while his target share would be better than just a third of players among that same post-2007 group, that’s more reflective of a smaller offensive role in general than it is of a lack of ability as a receiver. Satellite score is a metric that adjusts for overall production to contextualize how much of a player’s complete NFL role is likely to be made up of pass-catching. And Ingram’s 46.4 satellite score is an 84th-percentile mark that puts him in the territory of other versatile players like Miles Sanders, Reggie Bush, and Charles Sims.

While Ingram’s efficiency numbers are not quite on the level of Kamara (save for yards per reception where Kamara wasn’t incredible either), they do land in at least the 64th percentile. Ingram flashes on tape as well, showing natural smoothness in adjusting to downfield throws (below left) and a slick ability to immediately turn and face his end zone upon securing the catch in order to quickly create in the open field (below right):

As a runner, Ingram’s similarities to Kamara are striking:

There are some differences in the minutae of these profiles, but the stylistic picture they both paint is the same: a runner that consistently avoids negative plays and is excellent at navigating through the first level of the defense but doesn’t extend many runs deep into the secondary. Per my running back model’s comp machine, Ingram and Kamara share at least an 84% similarity in their performance in every one of these metrics.

Ingram’s strengths as a ball carrier pop on tape, as well as in the numbers. He displays good patience and an excellent repertoire of jukes and dead-leg type cuts in avoiding tackles, both in the open field and close to the line scrimmage:

The last piece of our puzzle is valuation, and Ingram certainly fits the Kamara bill in that area as well. You’d be hard-pressed to find a big-boy devy ranking service that has Ingram as a consensus top 10 back, as he’s routinely ranked behind guys like John Emery Jr. and Master Teague who, while owning strong profiles as recruits (Ingram himself was a four-star guy), haven’t shown anything near what Ingram has as a runner, pass-catcher, or producer. Even just among 2021-eligible runners, rarely does Ingram sniff the top 5.

I have Ingram ranked as my 7th-overall devy runner and as my RB6 in the 2021 class. Don’t let the relatively subdued production numbers scare you off from a player with a complete skillset and a workhorse frame. Instead, take advantage of pricing discrepancies that place less proven and less talented players above him on the value totem pole. At the very least, Ingram checks all the three-down boxes we want to see from our fantasy backs as a big, efficient runner with receiving chops. At his ceiling, he’s the closest thing we’ve seen to Alvin Kamara since Alvin Kamara.