I’ve got a model, and it’s pretty good. Essentially, it tries to predict which players will break out — or have one or more Top 24 PPR seasons. At its core, players with a rating of 50+ are projected breakouts, and as we move away from the 50, the more likely the model is going to provide a correct prediction. For more information on the model, check out the intro, class comparison, and a Q & A.

Who fell into the “edge” range this year?

Evaluating prospects that fall into this category presents a unique challenge for analysts. That’s because each of these prospects has a profile that is simultaneously compelling and flawed. When we focus on the good parts of a profile, we’re just confirming our biases. Conversely, it’s just as easy for others to make a convincing case against the same player.

Since the hit rate is about 50% for these players, you’re essentially a coin-flip away from confirming that you are indeed the best analyst ever. If you miss on a player? Oh well; so did a bunch of other people.

To be clear, I don’t think there’s a significant edge to arguing the ranking between these players. They are in a tier and roughly have the same probability of hitting. In rare situations, maybe we should make an exception (e.g., Edwards-Helaire landing in KC), but that doesn’t mean I’m comfortable doing it.

The way I try to gain an edge with these types of players is two-fold. First, I dig into their profiles and see if there’s anything I’m missing. Second, I try to buy low if a player starts to fall. For example, I don’t love Dillon but I’m not going to pass up the opportunity to draft him in the third round of a rookie draft. Personal preference be damned, give me that ~50% hit rate.

Of the two methods, the second is where the repeatable edge lays. Keep that in mind as I break down Moss and Evans.

Yeah, they are. But, this isn’t a Moss vs. Evans article. This is an Evans and Moss vs. themselves article. By reviewing these two “edge” and polarizing prospects, I want to demonstrate how easy it is to make the case for, and against, these types of players.

As much as they are different, they are the same.

Moss is also big, productive, and had some sneaky reception value.

Evans is also fast, efficient, and didn’t add much in the receiving game.

I mean, the articles practically write themselves when you’ve got playerprofiler.com, right? However, unlike Matt Kelley’s recent meltdown over Nate Liss’s selection of Edwards-Helaire at the 1.01, I’m not about to resort to making sheep noises. I’m prepared.

The biggest difference between Moss and Evans is their size and speed. Moss is slow. Evans is fast. And yet, neither is a significant negative outlier. Sure, they are close to the edge, but they aren’t plummeting to their doom (yet).

First up, Moss and his 4.65 forty. The cliff starts at about the 4.7+ range. He’s no Elijah Holyfield. Moss lives! 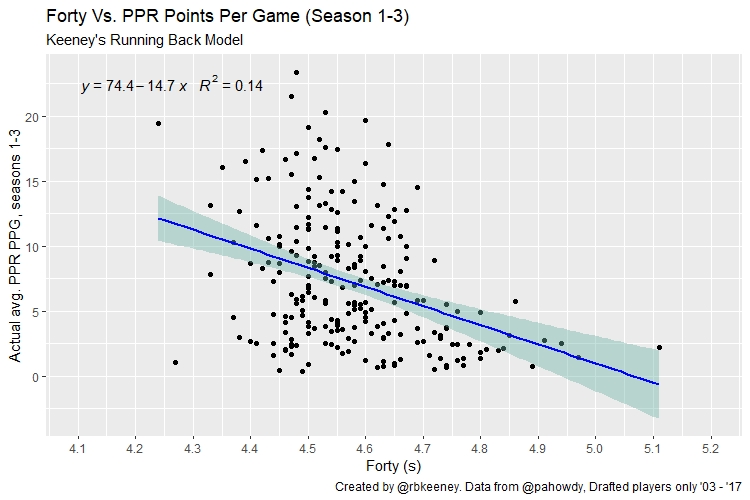 Is that concerning? Yes. And just like Moss’ 40-time, it shouldn’t scare us away. There have been plenty of running back prospects who’ve succeeded at around 200 pounds. 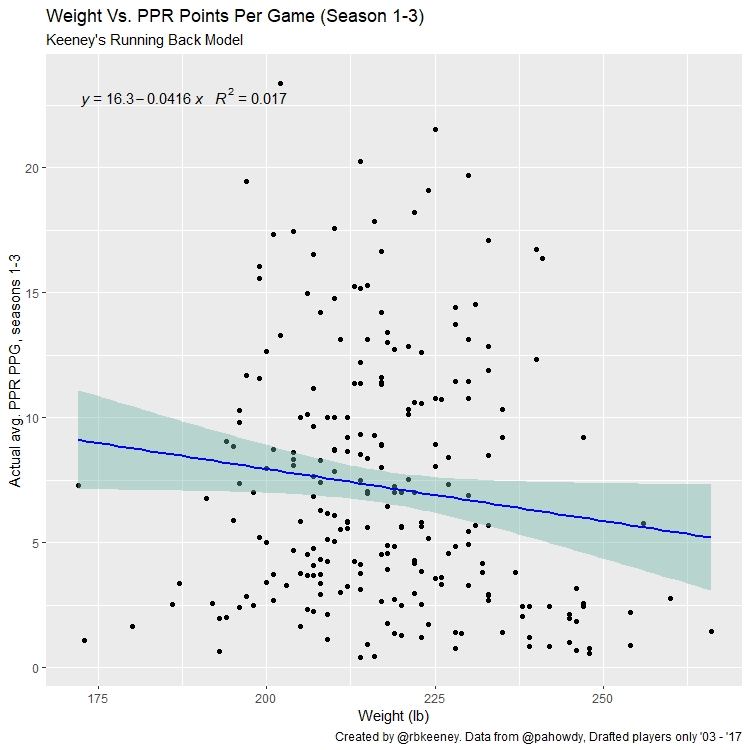 Bringing it together, let’s look at each player’s weight-adjusted speed scores. This is where Evans’ 107.3 (83rd percentile) speed score shines. 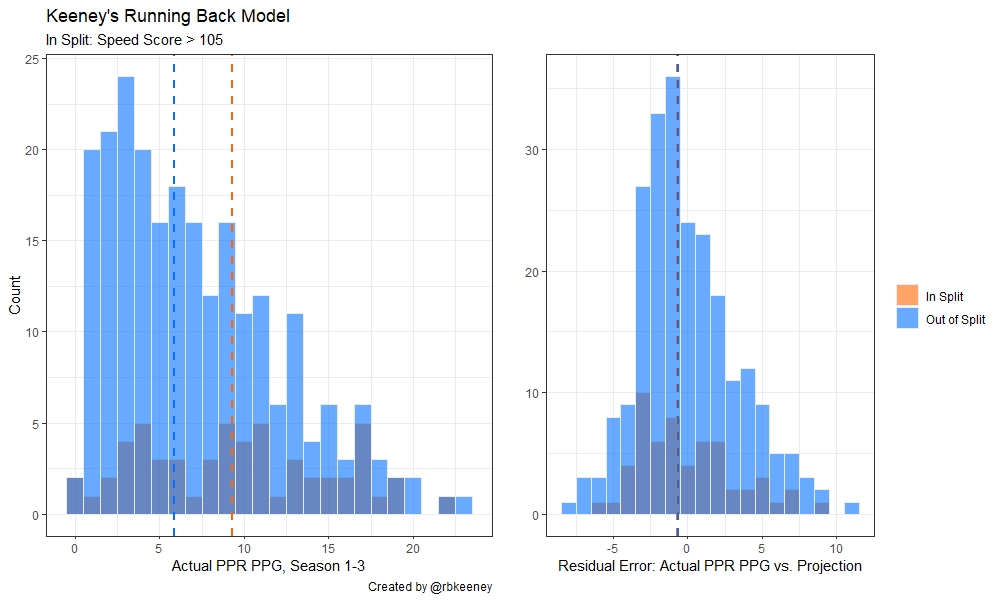 The left chart shows us that speed score outliers give us a significant edge in fantasy points per game. At the same time, the right chart tells us that the difference is already accounted for in the model. Since Moss’ breakout rating is similar to Evans’ rating, we don’t need to be overly concerned about Moss’ 95.4-speed score (46th percentile). The model has already correctly accounted for the difference.

Both Evans and Moss have faced criticism based on their level of competition. Consider that Evans played for an Appalachian State team that competed in the Sun Belt conference and went 11-2 and 13-1, and just about doubled their opponents’ points-per-game in his sophomore and junior seasons. These are perfect conditions for putting up rushing stats.

Small sample size alert, but both the yardage and average were well below his mean per-game totals of 18.3 carries for 106 yards (5.8 average).

Yet the model doesn’t see the level of competition (e.g., power-5 conference) as an issue. Players from Power 5 conferences score slightly more points, likely because they typically have better prospects and athletes, and the model accounts for it properly. 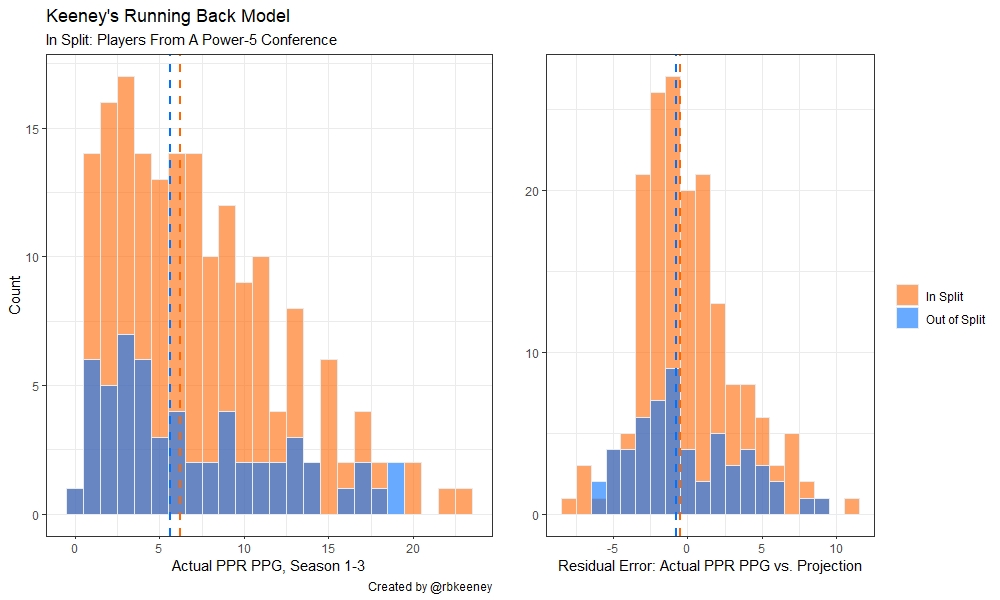 Who do you remind me of?

Is Moss the next David Montgomery, Kareem Hunt, or Montee Ball?

Is Evans the next Jamaal Charles, Tre Mason, or Darrell Henderson?

I prefer to start with athletism, size, and draft round. Then I compare their profiles within the model. This helps me understand how the model arrived at its final projection and identify strengths and weaknesses in a player’s profile. At the end of the day, I always end at the model’s breakout rating. That’s my bias.

My method gives us some interesting comps for Evans:

Evans falls right in the middle of this group’s breakout rating range, too. That’s not always the case when you do a size-athletism comparison. Evans wasn’t rated quite as high as Charles (60), Coleman (59) or Jones-Drew (62), but he is higher than Hillman (45) and Henderson (48).

If you took an evaluation-grade approach like PFF, you’d end up with some significantly worse comps.

For Moss, my approach identifies the following comparisons:

Honestly, I don’t see the Hunt comparison at all. Hunt might have been a third-round pick, but he was given a 76 breakout rating by the model.

I’m going to make this easy for you. Do you like Moss? Maybe you hate Evans? Well, either way, you are in luck. Here’s how I’d build the case for, or against, either player:

For me, the case for each player can be summarized by the following questions:

I’m willing to admit I don’t see a big difference between their overall profiles. As a result, I’ll just take whoever costs less, thank you very much.

If you force me to pick, I’ll take Evans. At these guys’ ADP, I’m willing to accept the risk he busts and shoot for upside. He’s rated four points higher in the model; plus, that Jamaal Charles comp is just too tantalizing.