Keeney’s Running Back Model: Comparing 2020 to Past Draft Classes 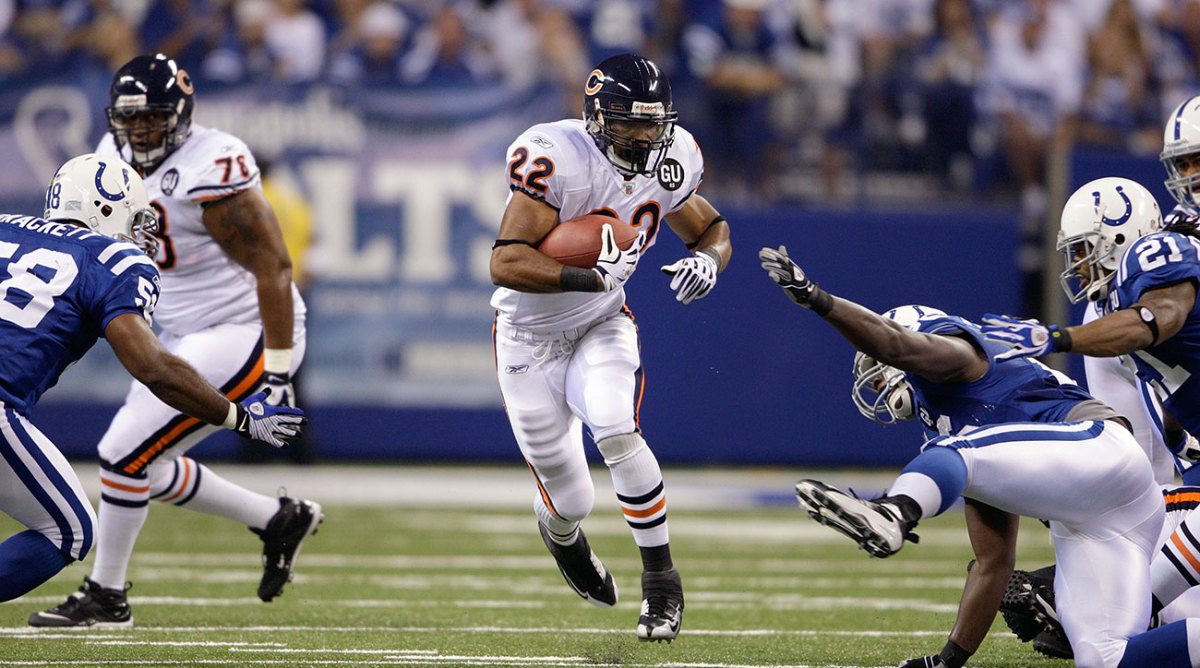 My running back class is better than yours

Correctly evaluating the strength of a running back class gives you a significant edge in fantasy football. You can use it to identify projected tiers in rookie drafts, evaluate when to select picks or players in start-ups, and when you should, or shouldn’t, hoard picks.

There’s been a lot of discussion about the strength of the 2020 class. It feels better than the 2019 class… but is it? How does it compare to the 2017 class? Are there more elite prospects this year than normal?

To answer these questions, I’m going to walk you through how I evaluate the strength of each class using the data from my running back breakout model.

‘Cause I’m a Breakout

To start, let’s look at each draft class by year and split prospects exactly like the model was trained to do: projected breakouts and misses.

Next, we’ll split the projected misses and breakouts into two smaller groups to get a better understanding of how each class was actually distributed.

First, I wanted to identify which prospects had a breakout rating below the 50th percentile. About half of our total samples have a breakout rating of 30, so we’ll split the data there. Players who score below the 50th percentile aren’t likely to be relevant in fantasy football, so we’ll label them “poor” prospects. These are players with lackluster profiles and are typically drafted in rounds 4-7.

Second, I wanted to identify the best prospects in the model: 90th percentile plus players, which correlates to a 70+ breakout rating. Players in this tier are almost always 1st round picks with strong production and athletic profiles.

Bringing it all together, let’s summarize our splits:

Finally, we can chart each draft class since 2003.

On average, there are 4.8 projected breakouts each year (’03-’19). More importantly, 2.8 are good prospects and 2 are elite prospects.

Looking back at previous draft classes, the chart matches our memory pretty well:

I’ll discuss the 2020 class in just a moment, but I want to highlight one of the best draft classes of all time: The 2008 draft class. 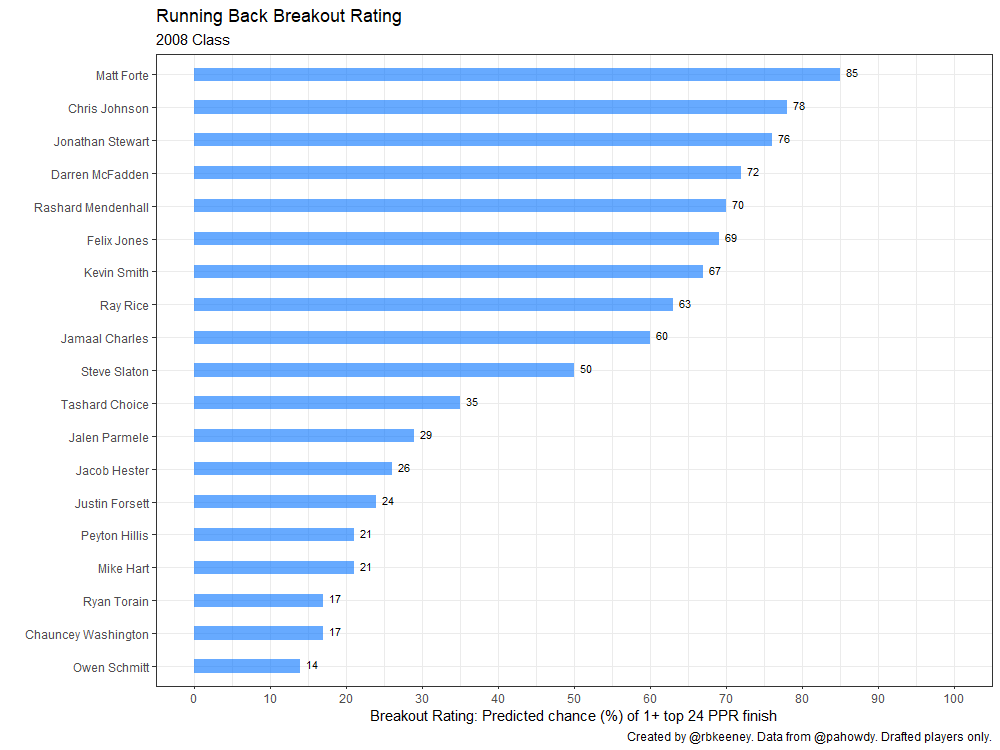 The 2008 draft was drunk on running backs. There were five running backs drafted in the first-round alone! More importantly, there were ten total projected breakouts – twice the average. And the cherry on top? Five elite prospects.

Surprisingly, the player with the top slot in the 2008 breakout ratings wasn’t even drafted in the first-round. Matt Forte, from Tulane University and the 3rd best overall prospect since 2003, would go on to be an absolute smash in the NFL.

Finding The Next Matt Forte

Returning to the 2020 class, pre-draft I think there’s a 60-70% chance we have an above-average class. This group of running backs is good, but the positional depth at QB, OL, and WR could push them down team’s boards.

I personally don’t see a true, Forte-level prospect this year. To clarify, if J.K. Dobbins, Jonathan Taylor, or Cam Akers go in the first-round, they will sneak into the elite tier. But, if they fall in the draft there’s a chance we won’t have an elite prospect.

In summary, the model agrees with the “Big 4 Running Backs” (Taylor, Dobbins, Swift, Akers) narrative and rates Darrynton Evans and Zach Moss as good prospects, for a total of six projected breakouts. 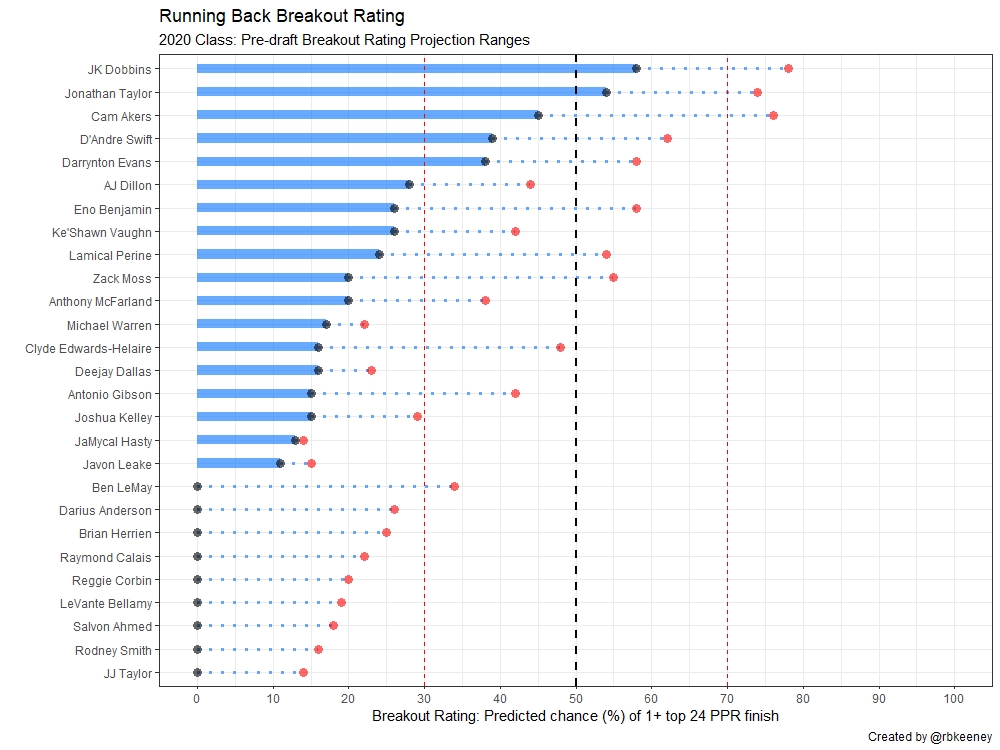 Who else has a chance to elevate their status during the draft? Looking at possible Day 2 (rounds two and three) players we haven’t mentioned yet, two players stand out from the rest: Eno Benjamin and Lamical Perine. If either player is drafted in the third-round or earlier, they will also qualify as projected breakouts.

A notable exception? Clyde Edwards-Helaire. Someone who the model doesn’t think will breakout even if he’s selected in the second.

It’s just a matter of timing

I’ll revisit the 2020 class after the draft – when the model’s projections lock-in. Until then, here’s to hoping that your favorite prospects get drafted early.