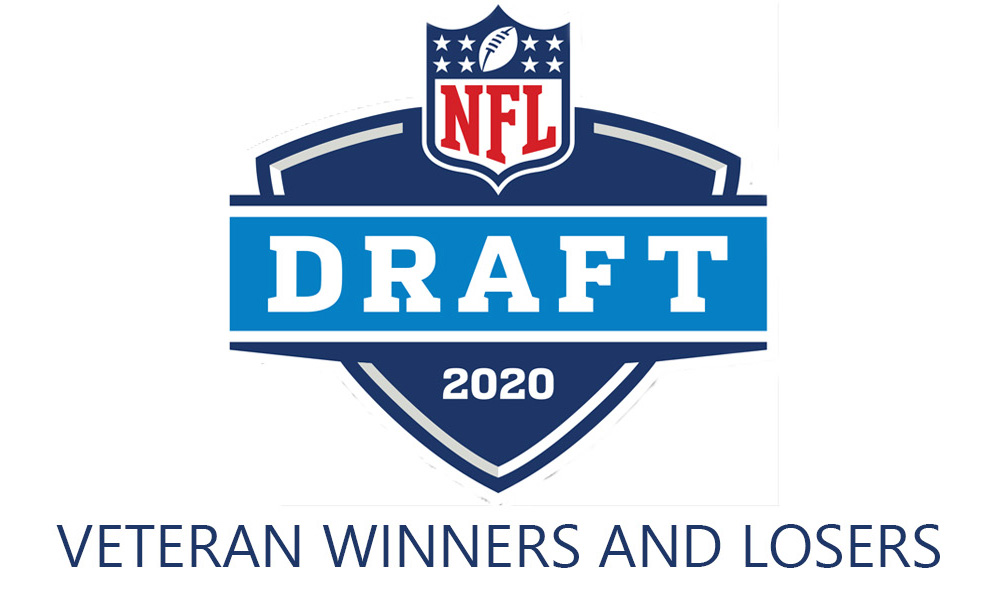 The moves made in the NFL draft have a major ripple effect across the league. Some veterans will face new competition at their position or a situation change. Others will benefit from a new teammate or find a clearer path to a starting role. Here we take a look at a few veterans who have seen a change in value following the NFL draft.

With both Chris Carson and Rashaad Penny finishing 2019 with season-ending injuries, many expected Seattle to look towards the draft for a new answer at the position. Luckily for Carson, Seattle didn’t address the position until Day 3 of the NFL draft.

Although we’ve seen late-round picks make an impact for Seattle (Carson was a 7th round pick after all), there has been no significant additions via free agency or the draft to challenge Carson on Day 1. After a positive report on Carson’s injury back in February, the front office seems to be putting their faith in the bruising tailback for at least another year (his contract expires after 2020). Coming into training camp, the starting running back job will be Carson’s to lose and he should have ample opportunity to earn an extension.

As one of the most polarizing running backs of the dynasty offseason, Austin Ekeler was a big winner post-draft. The questions surrounding Ekeler were valid; Would the Chargers replace Melvin Gordon? Can Ekeler continue his outstanding efficiency? Does the coaching staff trust Ekeler to run the ball?

All the signs throughout the offseason have been nothing but positive regarding Ekeler. After a surprising RB4 finish in 2019, he was awarded a four-year contract extension. The Chargers allowed Gordon — a former first-rounder — to leave via free agency. They also waited until Day 3 to add any backfield competition for Ekeler. When Gordon was unavailable early last season, Ekeler averaged a 71% snap share and 26.7 fantasy points per game (PPR). Ekeler has managed a ridiculous 1.29 PPR points per touch over the last three seasons, the most by any running back over that time span. He enters 2020 as the Chargers’ RB1 and should be able to command more than his 2019 snap share of 57 percent.

Not only has Philip Rivers gone from the Chargers’ 29th-ranked offensive line to the third-best line with the Colts (per PFF), but Indy is also making it a lot easier on the 38-year old veteran during his first year in Indy.

Philip Rivers gets some elite speed

The Colts draft Michael Pittman Jr. with the 34th pick in the #NFLDraft pic.twitter.com/HsQJVz7EsS

The Colts were aggressive in the 2020 draft, filling out an offense that was lacking weapons by taking USC WR Michael Pittman and Wisconsin RB Jonathan Taylor early in the second round. At 6’4″ and 223 pounds (with a 4.52-second 40-yard dash), Pittman should provide a legit outside presence, allowing diverse WRs T.Y Hilton and Parris Campbell to move around the formation. Taylor — the best pure runner in the draft — joins a backfield already sporting last year’s 9th-leading NFL rusher Marlon Mack and pass-catching specialist Nyheim Hines. Rivers’ arrow continues to trend upwards with his new team, and he is becoming a sneaky-late fantasy pick with low-end QB1 upside.

(You can read more about Taylor here, and Rivers here.)

A quiet winner over the weekend, Preston Williams seemed to solidify his role as the WR2 in the Dolphins’ offense. After signing on as a UDFA last year, Williams surprisingly opened up the season as WR2 across from Devante Parker. His role steadily increased as he proved to be a reliable asset, averaging five receptions for 65 yards over a three-week period before an ACL injury ended his season in November. Williams put an exclamation point on his 11.3 PPG (PPR), with a 24.4-point showing in Week 9 against the New York Jets.

Unfortunately, Williams’ injury left us with only a taste of his potential upside. Fantasy owners are wondering if Williams has done enough to gain the same opportunity in 2020. After a free agency period with no meaningful additions and a WR-free draft, the Dolphins seem to be comfortable with Preston returning as their WR2. With new QB Tua Tagovailoa now in the mix, Williams continues to have late-round sleeper value and could be a valuable asset in fantasy.

It would have been bad enough for Tyrell Williams with the Las Vegas Raiders spending the 11th overall pick on Alabama WR Henry Ruggs, but they followed it up by doubling down in the third round with Breakout Finder favorites Bryan Edwards and dynamic QB/WR/RB Lynn Bowden Jr. 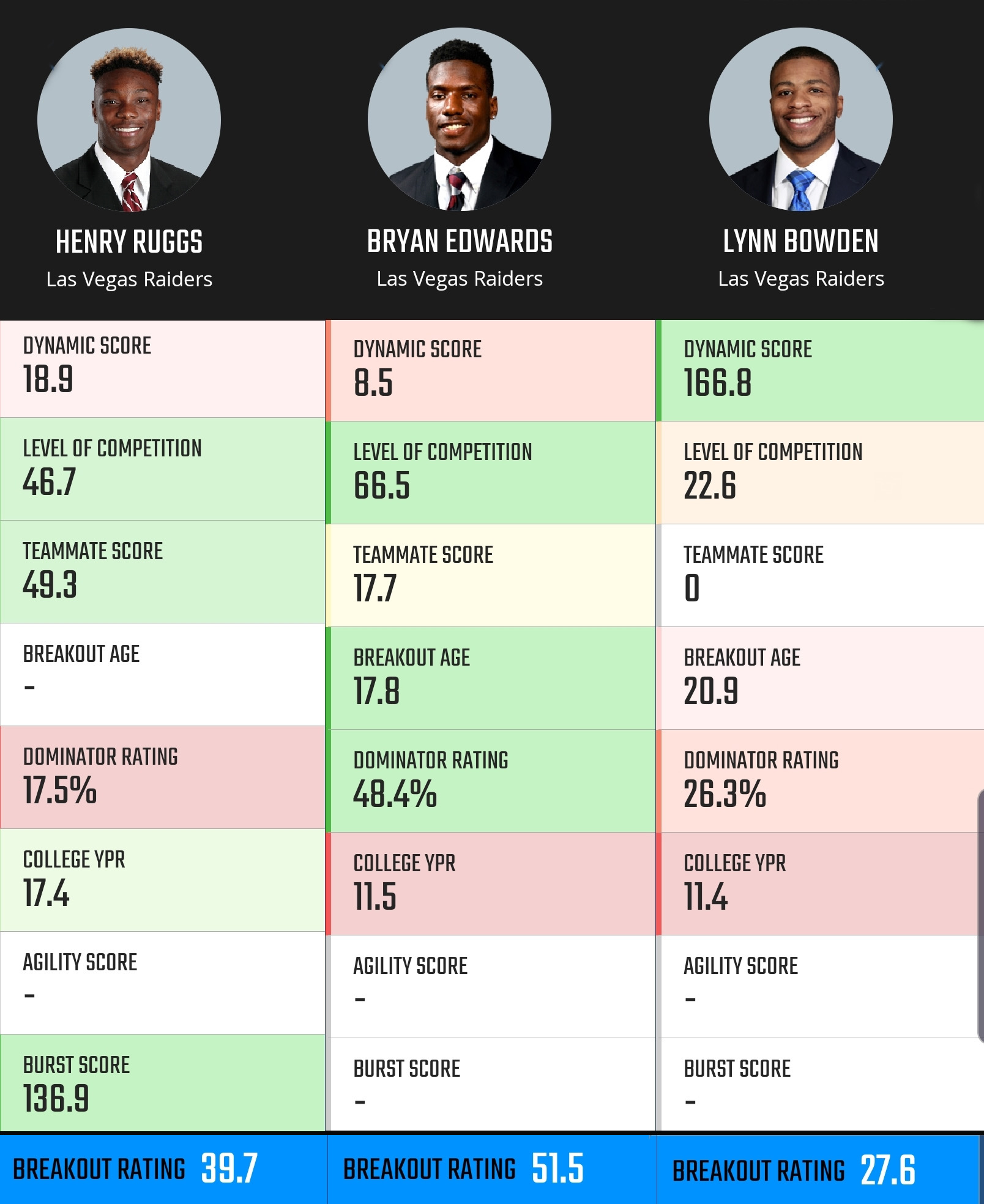 Williams actually finished 2019 as the Raiders’ leading wide receiver, but he wasn’t far ahead of 2019 rookie Hunter Renfrow. Renfrow had more receptions and targets than Williams, finishing with 50 fewer yards receiving, while only starting four games compared to William’s 12 games. To say Williams’ days as a useful dynasty asset are fading would be an understatement.

In possibly the most surprising move of the NFL draft, the Green Bay Packers spent a second-round pick on Boston College RB A.J. Dillon — the highest draft capital given to a Packers RB since Eddie Lacy in 2013. With NFL touchdown leader Aaron Jones and reliable backup Jamaal Williams still in the backfield, some are questioning the importance of such a luxury pick.

When digging a little deeper, one can find some believable reasons for the move. First, Green Bay has never seemed open to giving Jones a massive workload, citing his smaller frame and previous injuries. Second, both Williams and Jones have expiring contracts after 2020. There have even been a few who suggest Jones could be a hold-out candidate to start the year. If you’re reading between the lines, it seems as though Green Bay is preparing for the eventual departure of Jones and/or Williams. At the very least, Jones could be looking at an even steeper timeshare than his 55% from 2019.

(You can read more about A.J Dillon here.)

With the Cowboys spending the 17th overall pick on Oklahoma WR CeeDee Lamb, it’s not hard to see why Michael Gallup‘s value has taken a serious hit. Lamb was the consensus overall number one wide receiver on many draft boards (mine included). Although the battle to take over the WR2 position across from Amari Cooper (who also just signed a mega five-year extension) might be a year-long battle, the eventual takeover is inevitable.

Teams always talk about taking the best player available. The Cowboys absolutely did that by taking CeeDee Lamb with the 17th overall pick pic.twitter.com/c3xiyM3WDR

The good news is that the Cowboys produced the #2 passing offense in 2019. There’s upwards of 105 targets vacated by the departure of Jason Witten and Randall Cobb, although repeating this potency, or expecting Gallup to be the beneficiary, is a hard sell. It’s not a death blow to the value of Gallup, but it’s certainly not what his fantasy owners were hoping for after watching him finish with over 1,100 yards and six touchdowns in 2019. After being a sneaky buy candidate pre-draft, Gallup now becomes an easy sell to me, especially if he can put together a couple of good games early.

It seems like a bit much to keep hating on the Packers, but their draft was one of the biggest head-scratchers of 2020. Not only did Green Bay draft a first-round quarterback in Utah’s Jordan Love, but they failed to acquire any impactful receiving weapons for Aaron Rodgers after a 2019 season that saw him struggle to gain chemistry with the position, outside of Davante Adams.

If we exclude his injury-plagued 2017, Rodgers had not finished worse than QB7 since 2014. In his first year under Matt LaFleur’s run-heavy scheme, Rodgers finished at a modest QB11 in 2019. LaFleur continued to assert his run-heavy vision in the draft, taking nothing but offensive pieces designed to help the run game. Without any additional help at wide receiver and a strong emphasis on rushing the ball, it’s hard to imagine Rodgers improving on his 2019 season very much.