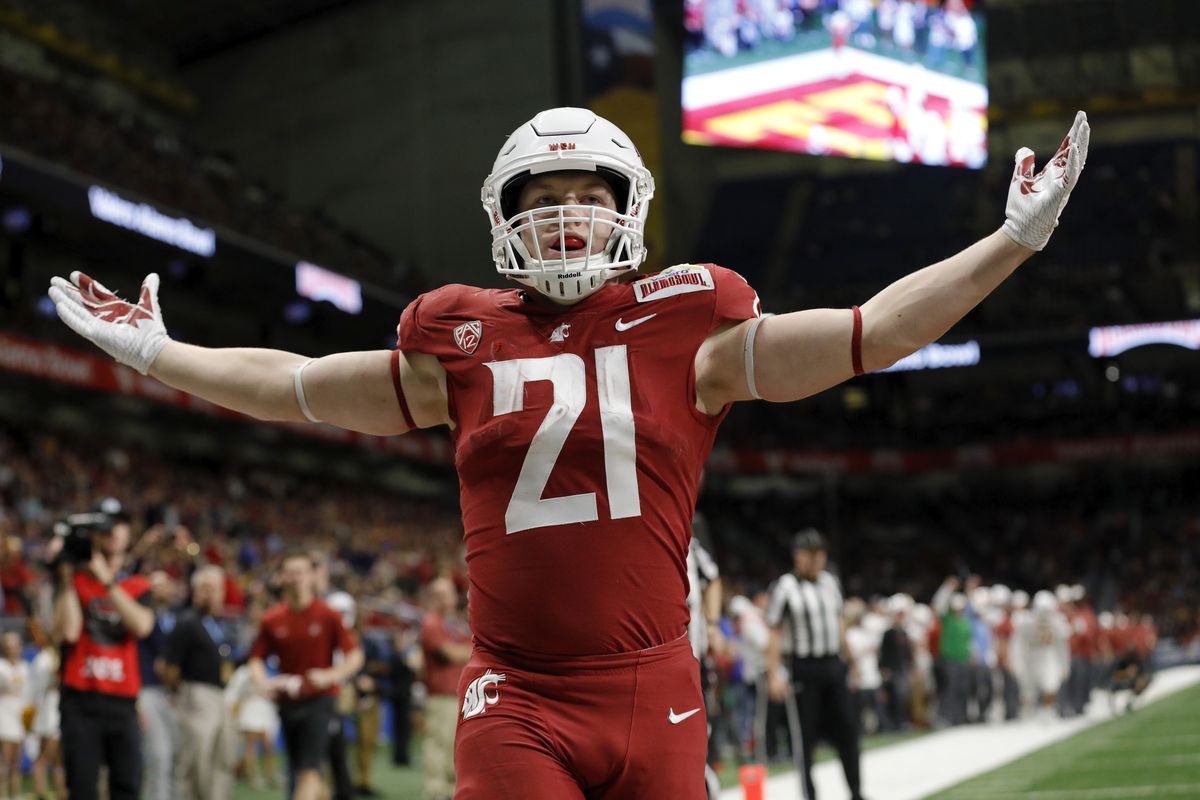 Anyone paying any attention to college football or playing in a devy league should be very familiar with the name Max Borghi by now. His production through two seasons at Washington State, particularly through the air, is no joke, and it has seen him settle in at RB4 in devy ADP over at Dynasty League Football. I’m not here to introduce you to Borghi as a guy to keep an eye on — he’s already on your radar — but rather, I want to look at Borghi’s profile relative to the profiles of 350+ backs who have been selected in the NFL Draft since 2007 to try to determine exactly how interested we should be in this guy a year out from the presumptive beginning of his pro career. We know Borghi is good, but is he Chuba Hubbard good? Travis Etienne good? Christian McCaffrey good? Let’s find out.

Borghi’s resume as a runner is not as robust as his traits as a pass-catcher, but in fairly limited work he’s been very impressive. Chunk Rate+ is a metric that measures a player’s rate of 10+ yard runs above the rate of his teammates, and Borghi is one of only nine running backs in my database — a group that includes Chris Carson, Darrell Henderson, and Todd Gurley — who has outperformed the other ball carriers on his team by at least 10% in the chunk run department. Borghi also checks into the top 30 in my database of players outperforming their teammates in Breakaway Rate (using 20+ yard runs), slotting in just below the 3.5% mark near guys like Derrius Guice, Lamar Miller, and Rex Burkhead.

The Cougars’ offensive line has been an average-to-decent group during Borghi’s two-year career (pretty good in 2019 and very “meh” in 2018 according to Football Outsiders’ offensive line metrics), but Borghi has posted situationally-dependent efficiency numbers that suggest he’s making things happen above and beyond what his line is giving him. His True YPC rate (which gives credit for yards on each carry up to, but not beyond, 10 yards) is 4.40, while he’s lost yards at a lowly 6.64% clip. Both of these marks would be above the 75th percentile among backs drafted since 2017 (as far back as I have data).

Our call of the game is Max Borghi’s power run to put the Cougs up for good!#GoCougs pic.twitter.com/cf4dH2YcMc

Despite quality efficiency, fair questions remain about Borghi’s ability to run the ball between the tackles. He really hasn’t shouldered much volume, with less than 200 carries through two seasons, and it remains to be seen how he functions outside the context of a wide-open, Mike Leach-led Air Raid system. We will receive answers to those questions in what will likely be Borghi’s final college season in 2020, but with a composite Rushing Efficiency Score of 77.2 out of 100 in my prospect model (a top-30 mark that puts Borghi in Duke Johnson, Giovani Bernard, and *gasp* Jonathan Taylor territory), the Washington State star could see his numbers dip substantially and still come out looking like a quality runner.

Where Borghi really separates himself as a talent and future NFL prospect is in his ability as receiver. In just two years of college ball (one of those as a freshman part-time player), Borghi has hauled in 139 passes, a total that would make him the 11th-most prolific pass-catcher among all running backs in my database. He has already caught more balls in his college career than did several guys who went on to become the best satellite+ backs in the last generation of the NFL, including Saquon Barkley, Christian McCaffrey, Reggie Bush, Matt Forte, Austin Ekeler, and Danny Woodhead.

Borghi’s team-adjusted receiving numbers look good as well, as his 13.7% target share in 2019 puts him right on par with the career-best marks of guys like Theo Riddick and Nyheim Hines. His Satellite Score, which adjusts his receiving production for his overall contributions to the offense to project how much of his NFL role pass-catching might account for, is nearly double my database average at 60.0.

Borghi is a rare weapon out of the backfield and should immediately become one of the league’s best receiving threats at running back when he turns pro. His composite Receiving Chops Score is a fat 82.5, one of only 22 running backs above the 80.0 mark in my model. The only guys with higher scores there (among pure running backs, so excluding WR/TE-converts like Ty Montgomery, Jaylen Samuels, and CJ Prosise) are the following: 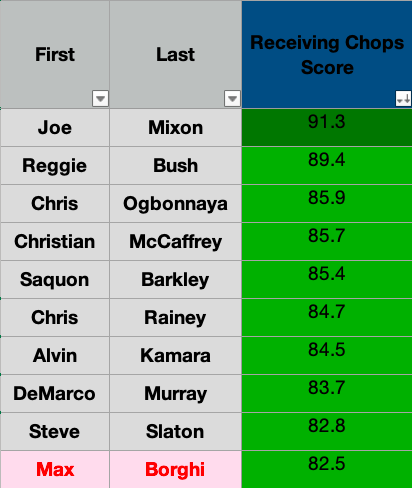 Borghi is a freshman breakout from a quality program who already has one of the best rushing-receiving resumes in recent prospect history. His mix of Giovani Bernard-level pass-catching prowess and Todd Gurley-like college efficiency on the ground is rare. Only five players in my database can match him: 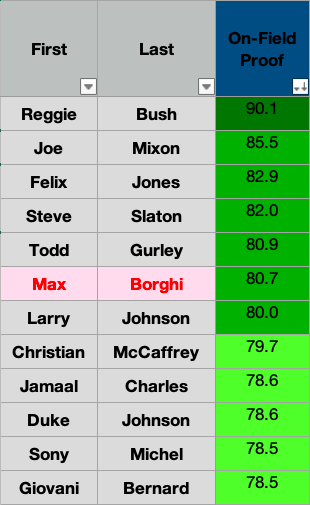 So where do we go from here? For Borghi, 2020 comes with things yet to prove. As mentioned before, he will need to show that he can maintain efficiency on the ground while (presumably) shouldering more work between the tackles. As a receiver, there are very few questions, but for the inevitable CMC comparison to ring true, Borghi would need to increase his per-reception and per-target efficiency as more of a downfield threat than he has been to this point. As of now, he’s occupied a role mostly as a high-volume (but low target depth) option who makes things happen after the catch. Compare his efficiency as a receiver to some other recent prospects (sorted by yards per target): 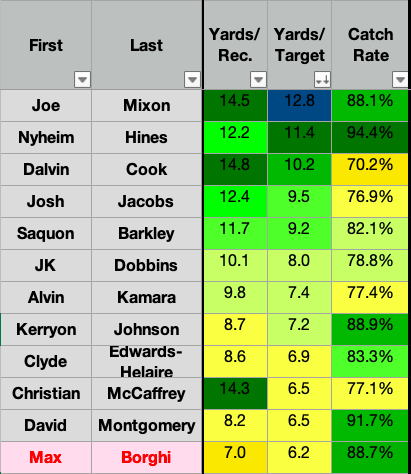 Much of Borghi’s relative inefficiency (as if being a Clyde Edwards-Helaire-caliber receiver is a bad thing) is likely due to usage, but it would be nice to see him unleashed even more as a downfield receiver. He clearly has the hands and athleticism. He reportedly has been clocked in the 4.35-range in the 40-yard dash, as well as the flashes on tape, to suggest that he can thrive there.

Max Borghi just had this wheel route TD taken away on an offensive PI. Borghi has a game built for today’s NFL pic.twitter.com/15djNlBwYX

Looking forward, I don’t know what exactly separates the Big 3 devy running backs — Travis Etienne, Chuba Hubbard, and Najee Harris — from Borghi by himself in that next tier. (I derived these fairly subjective tiers from DLF devy ADP, in which Etienne, Hubbard, and Harris all are regularly taken in the top 2-6 picks while Borghi settles in around pick 10.) Borghi is a better receiver than all of them, and his production on the ground has been limited so far only by his volume. Ten years ago, a smaller, Reggie Bush-type runner/receiver hybrid in the mold of a Borghi would have been miscast in the NFL as a pure satellite back or a part-time complementary player. In the case of a guy like Duke Johnson, we see some of that residual size bias maintain itself into the present day.

For Borghi, this is where the McCaffrey comps will come in handy. He (along with Duke Johnson) deserves to be unleashed as a full-time offensive weapon, and if NFL teams look at the quickness, the pass-catching, and the red jersey and the white skin, and they see CMC — and they will, right or wrong — then Borghi will have the built-in advantage of appealing to the cognitive and visual biases of the powers that be. For that reason, I’m confident that teams will properly value (if not for improper reasons) Borghi as an elite-level talent, giving him the requisite opportunity to convert that talent into high-level fantasy production. He’s somewhere on the Austin Ekeler–Christian McCaffrey spectrum, and I like him as much as any back in the 2021 class.