Temple’s Re’Mahn Davis ran for nearly 1000 yards and caught 15 balls as a true freshman in 2019 and, with size and ability as a ball-carrier that hint at workhorse potential, is a guy who is criminally underappreciated in the devy-land. Let’s take a look at his production profile through the lens of comparisons and percentile ranks among backs who would go on to play in the NFL, as well as examine his on-field resume compared to pro and current devy runners. 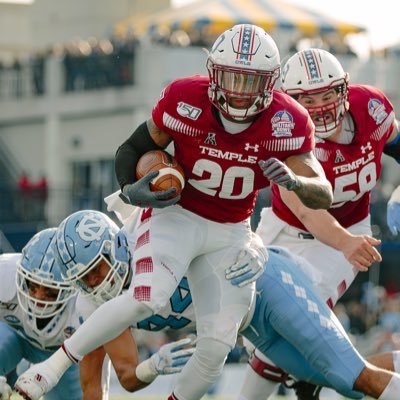 Of 318 true freshman running back seasons in my database, Davis’ composite Production Score of 69.3 (out of 100) ranks in the 81st percentile as the 59th best among them. Because the season scores are generated using a combination of dominator rating and team quality, there’s more than one way to arrive at a particular score; Davis’ true freshman score is nearly identical to the true freshman score of Ronald Jones, whose (relatively) smaller role in his team’s offense was offset by his playing at a big-time program.

Temple is clearly not a big-time program. The 2019 squad finished with the 6th-best record among 12 teams in the American Conference, and got thumped 55-13 in their bowl game by a meh, 7-5 North Carolina team out of the ACC. Their S&P+ rating (a team-rating metric devised by Bill Connelly) of 3.2 ranks in the 32nd percentile among teams of drafted RBs since 2007. The burden of proof for a player on such a team to show that he is a legitimately talented guy is high; Davis delivered the evidence last season.

The 24.8% Dominator Rating he posted is an 87th-percentile mark, coming in in the top 40 among all true freshmen and as the 12th-best mark among true freshmen at non-Power 5 schools. 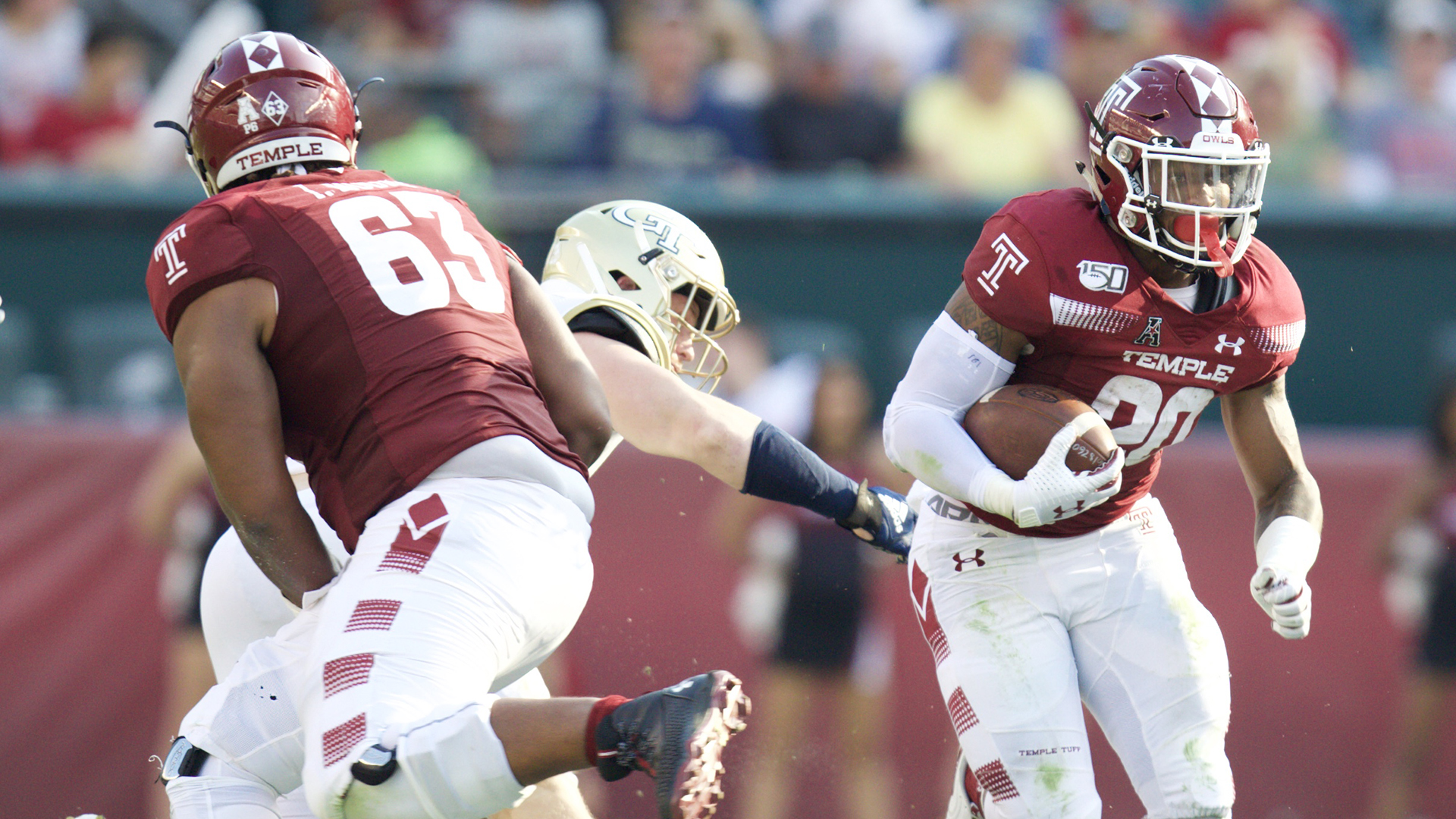 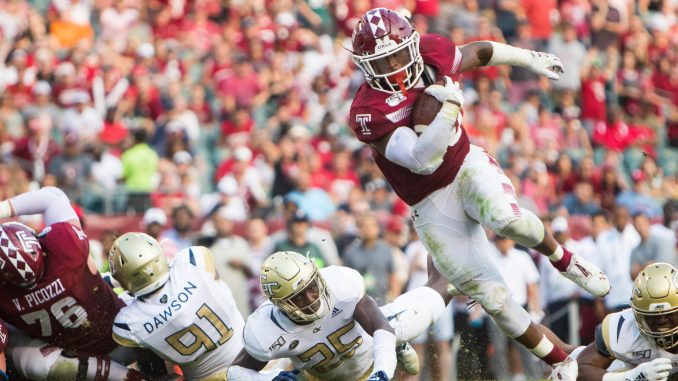 It is a statement of fact to say that Davis was a productive player as a true freshman at a non-major program, but rustling through the weeds to parse out what exactly that means is somewhat of an inexact science. One thing we can take away is that Davis’ relatively lowly status as a high school recruit — he was a three-star guy with a 247 composite rating in just the 16th percentile among backs drafted since 2007 — should start sliding into the rearview.

That 247 rating has very little predictive value when it comes to projecting the draft capital a player will eventually demand, and the value it does have is matched (slightly exceeded, actually) by my model’s true freshman Production Score. Basically, we don’t know a ton about how the NFL will view Davis by just looking at his recruiting pedigree or his first-year production, but we do know that we should value those two things about equally at this point.

To me, that means a guy with the Davis profile — the lightly recruited dude with the impressive early production — should be valued similarly, all else being equal, as a player with the opposite profile — the highly-touted recruit with the underwhelming freshman year. 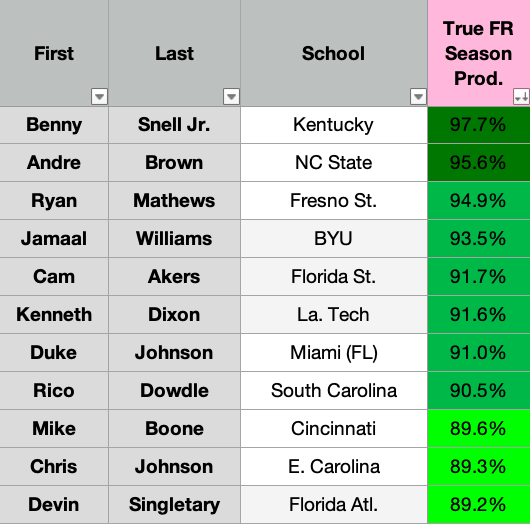 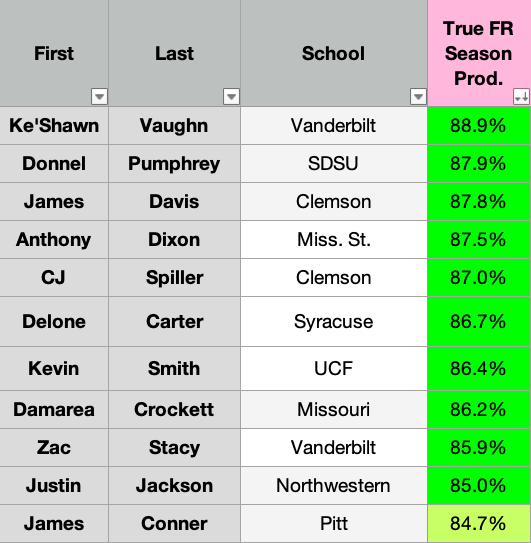 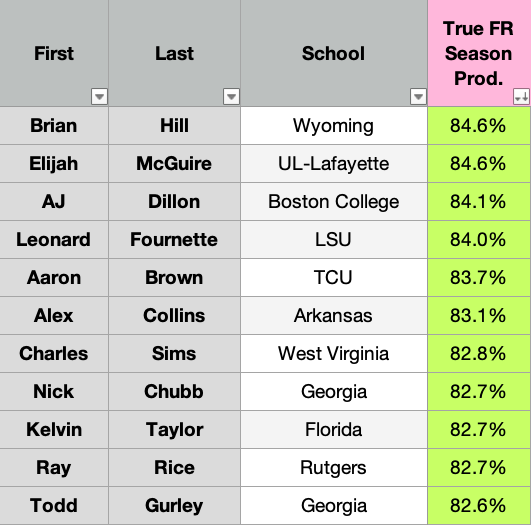 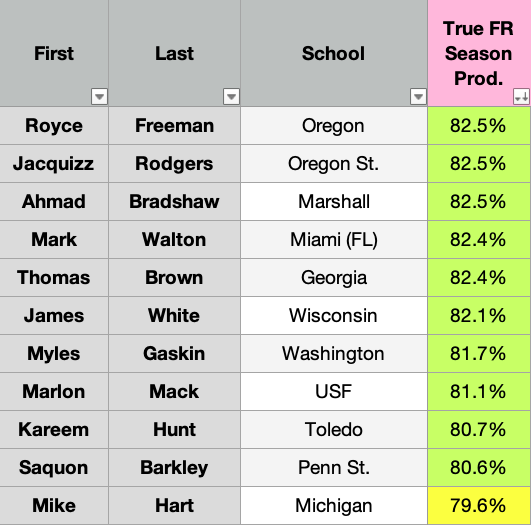 The above screengrabs show every player in my database who posted a true freshman season that is at least 80% similar to Davis’ 2019 campaign (plus Mike Hart to make a clean 4×11). The appearance of names like Todd Gurley, Leonard Fournette, and Cam Akers on these lists deserves some scrutiny; in the cases of Gurley and Fournette, the similarities between their seasons and Davis’ are fueled mostly by comparable Dominator Ratings, while in Akers’ case, it’s driven by S&P+’s opinion of recent Florida State squads being as low as its estimation of many run-of-the-mill mid-major teams. We can further filter these comparisons by looking at true freshman seasons from only non-Power 5 players: 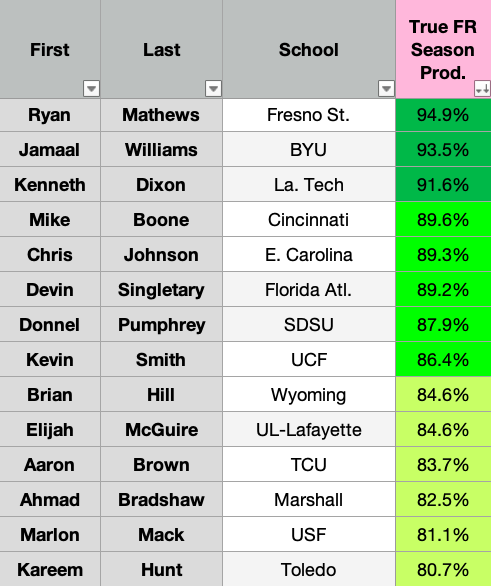 Now we’re talking: the most immediately comparable seasons among all players in the database, accounting for production, age, team quality, and conference affiliation (and, by extension of the last two, an approximation of the kind of depth chart a player needed to ascend in order to make an impact).

I think this is an intuitive and fairly impressive list of comps, but I want to filter even more. A lot of these guys, despite producing similarly, can’t touch Davis from a complete profile standpoint, either by virtue of not having the size we look for from potential NFL lead backs, or by virtue of not having the efficiency or receiving numbers to validate their production as something beyond volume-based compiling. Let’s take a look at Davis’ raw traits and on-field resume.

Ray Davis is a stout 5’9, 210, and runs a reported 4.6 40-yard dash to go along with a 35″ vertical and a 4.10-second 20-yard shuttle. A caveat for the dubious reliability of high school athleticism numbers applies here, of course, but if those marks are even close approximations of his ability, Davis exists somewhere on the Aaron Jones-Dexter Williams-Jay Ajayi-Kenneth Dixon athleticism spectrum. Given Davis’ also structural resemblance to the 5’8, 208 Jones, I don’t think that’s a terrible comp from a purely superficial standpoint (and though Jones was also similarly dominant as a true freshman at a small school, those UTEP teams are rated significantly lower than 2019 Temple in S&P+, so the comparison numbers for the production resumes aren’t super high). 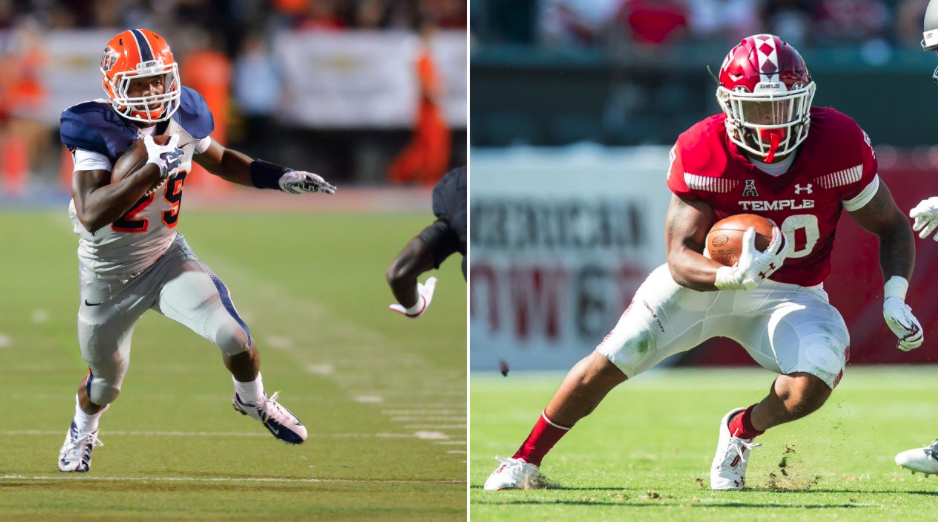 On the field, Davis has put his solid athletic ability to good use, especially as a runner. I like to compare player rushing efficiency numbers to those of his teammates in order to quantify the degree to which he is over/underperforming the average output of team runners, and by that measure, Davis was excellent in 2019.

Instances often arise of players who are just ok in Chunk Rate, or even lag behind their backfield mate in the metric, but who dominate in Breakaway Rate+, which in turn leads to seemingly impressive YPC+ marks that are inflated by frequent long runs. In examining the failure of Jeremy McNichols, probably the most egregious bust among players that my RB model rated highly as prospects, this particular brand of efficiency profile struck me as potentially problematic. Such a potpourri of data points, I think, speaks to a running style that lacks nuance, that is inconsistent, or that overly relies on athleticism. Creating big plays is important, but relying on them for your production against lesser competition is a red flag.

I say all of that to say that Davis has a rushing efficiency profile that is exactly not problematic in the way that McNichols’ was (a trend of high-profile busts including Jahvid Best, Ameer Abdullah, Bishop Sankey, and Isaiah Pead all had McNichols-ian profiles themselves). Davis’ situation is quite the opposite; as a freshman, he didn’t create a ton of big plays in the running game, and his per carry output suffered a bit for it, but he was tremendous at finding holes, navigating through the first level of the defense, and reaching the secondary.

I believe these three metrics together tell a pretty good story of the kind of runner that a guy is — Davis’ team-adjusted, composite Rushing Efficiency Score is a 62.9, right there in DeMarco Murray, JK Dobbins, Zamir White-territory — but if I had to choose one of them that speaks most adequately to a player’s ability to consistently make things happen with the ball in their hands, it’s Chunk Rate+. 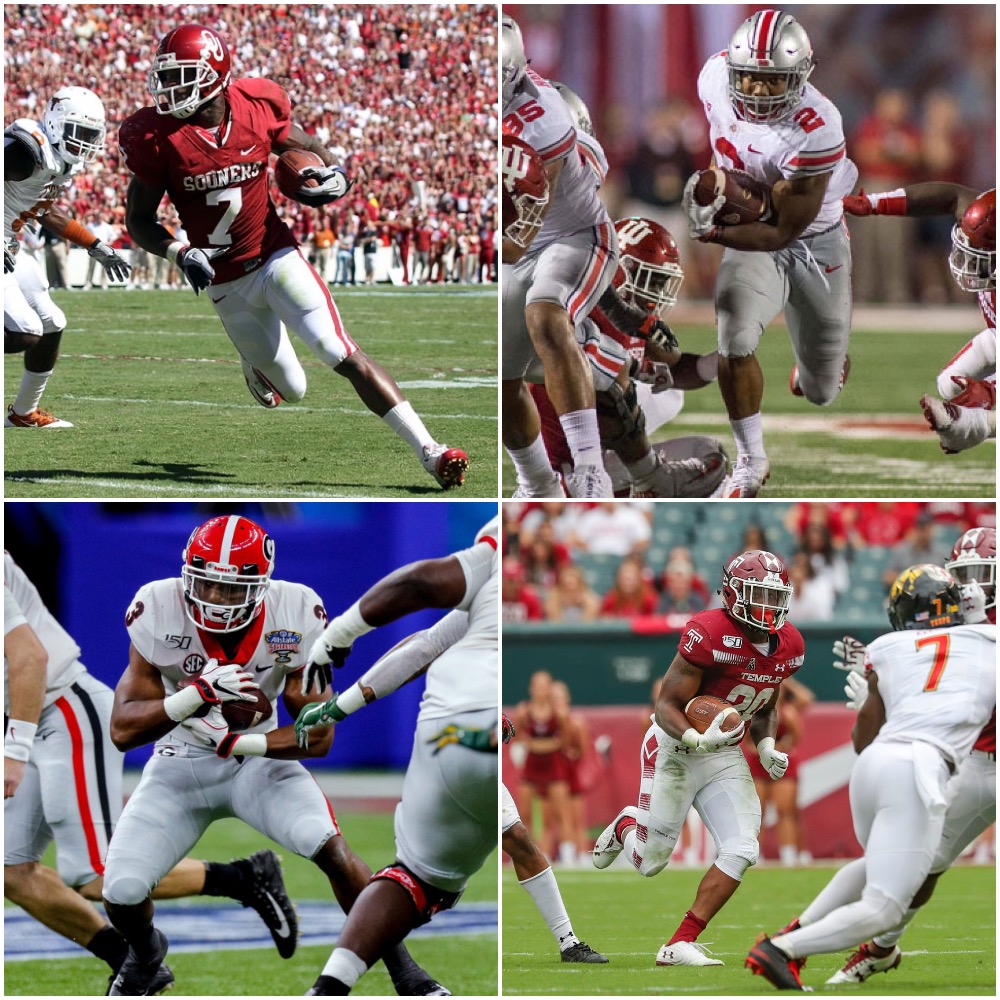 As a receiver, Davis is less advanced, but reasons for optimism do exist. He caught 15 passes on a 5.7% target share in his first year out of high school, which isn’t anything to sneeze at. He was particularly impressive on a per reception-basis, with an average of 12.1 yards per catch to his name. That 82nd-percentile mark likely speaks more to his ability as a runner out in space after the catch than it does to his smoothness as a pass-catcher, though, as his 60% catch rate shows that he did have some struggles. At this point, contributing in the passing game is not so much a strength of Davis’ as much as it is an area where he isn’t a liability. His 40.1 composite Receiving Chops Score in my model is below average, but it’s not terrible for a first-year guy; with work, there’s no reason he can’t develop into a reliable component of the short passing game.

Let’s go back to that list of players with the most similar true freshman seasons compared to Davis’ 2019:

Having now examined Davis holistically, we can widdle this list down to the truly relevant comps. By eliminating guys here who didn’t have NFL lead back size or BMI while in college (which means we say goodbye to Chris Johnson), and who didn’t add value on the ground relative to their college teammates (I used the 50.0 mark in my model’s Rushing Efficiency Scores as the threshold), we narrow our comps down to Ryan Mathews, Jamaal Williams, Aaron Brown, Ahmad Bradshaw, Marlon Mack, and Kareem Hunt.

These aren’t really play-style comparisons (Davis is likely a better athlete than Williams, likely slower than Mathews, likely not the receiver Hunt is), but rather context-informed quality approximations. Indeed, my model’s all-encompassing Devy Scores for these players all fall in the 55-65 range. The career outcomes of these guys are how my intial range-of-outcome projections for Davis’ career would likely look, using just the information we have now.

In order to stay on the Ahmad Bradshaw / Marlon Mack trajectory, Davis will need to build — from a production standpoint — on the impressive true freshman campaign he posted a season ago. The most successful NFL players among the above group all increased their Dominator Ratings from freshman to sophomore years, with Bradshaw and Hunt each making nearly 18.0% jumps in their second seasons. If Davis can do anything like that, he will be well on his way to top-end small school sleeper status in future rookie drafts. 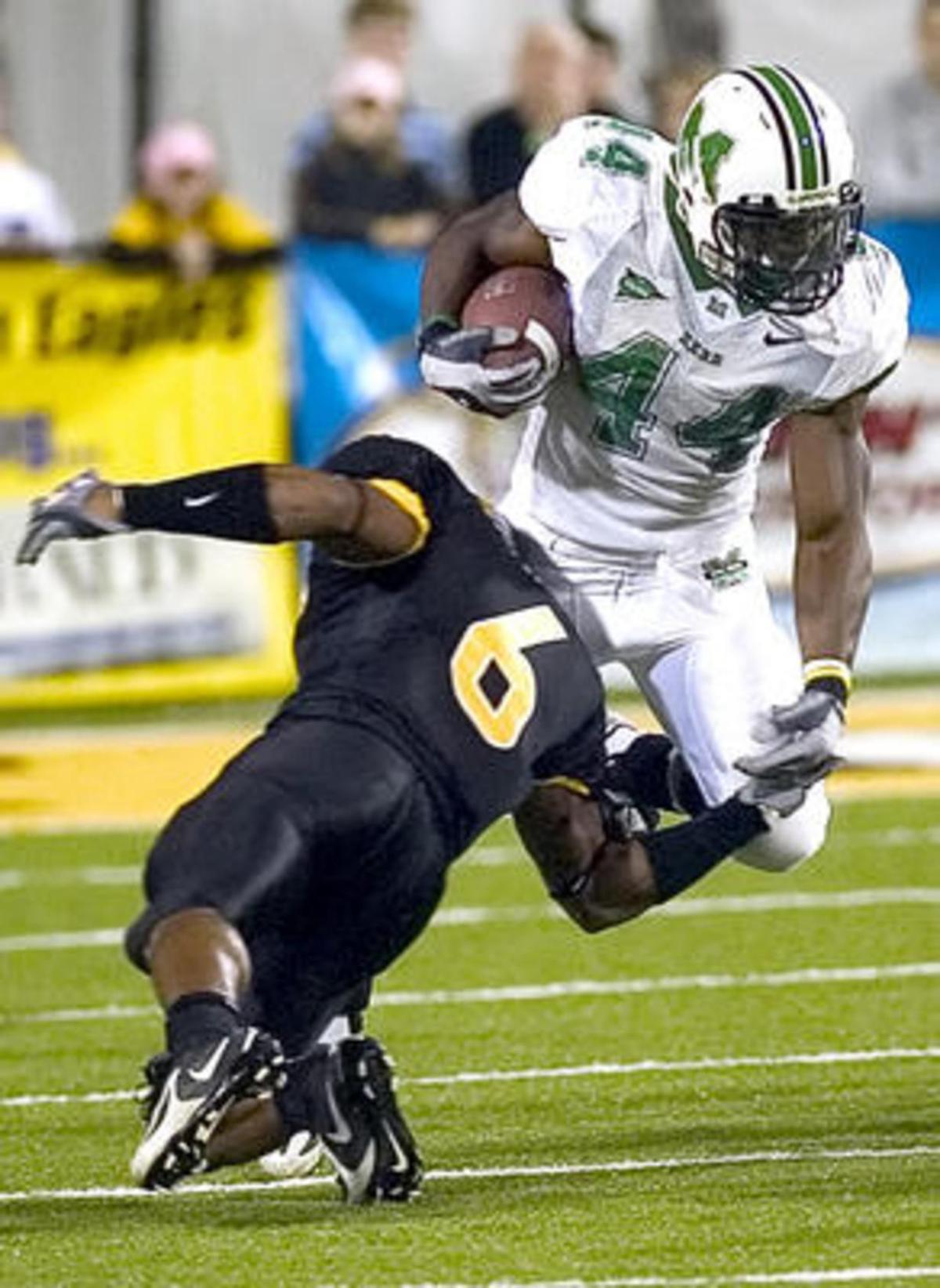 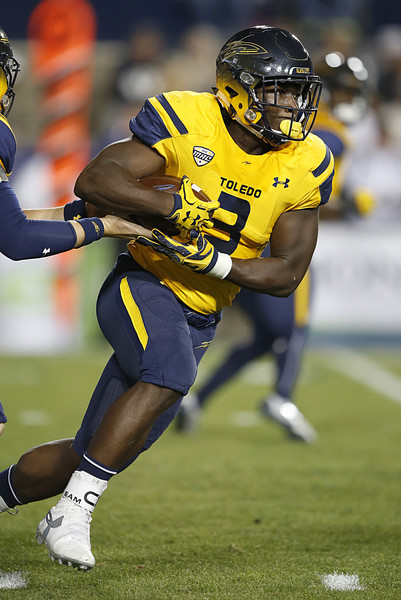 At the going rate, it won’t cost you much at all to invest and find out where the train takes you. Davis is currently unranked and without a devy ADP over at DLF, and is being selected as the RB53 according to Devy Watch mocks. He looks more the part of an NFL workhorse than many more highly ranked players, including Javian Hawkins, Wan’Dale Robinson, and Pooka Williams, and he’s shown more as a runner than soon-to-be sophomores with more hype like George Holani, John Emery, Isaiah Spiller, and Noah Cain.

I’d take Davis over every non-Spiller player I just listed, but you’re more likely to be confronted with a Davis vs. Zonovan Knight decision than you are a Davis vs. Emery conundrum. In that dart-throw stage of drafts, there’s no contest. Take the man with the legitimate all-around profile and profit; Re’Mahn Davis is the pick.