Talent vs. Price: The Worst Value Running Backs in Dynasty

Recently, I wrote about The Best Value Running Backs in Dynasty, and this article is constructed around the same ideas, just executed in the opposite direction. If you can effectively identify the disconnects between player talent and player value, you can sell, fade, and avoid the right players, thereby maximizing the value of the assets at your disposal (namely, draft picks and roster spots).

To that end, my running back model seeks to quantify talent in relation to all players in a positional group. I want to know which running backs produce, run efficiently, contribute well in the passing game, and earn and handle heavy work the best — all relative to each other, all stripped down to player-isolated impacts as much as I can by arming the evaluation with context.

For this analysis, I generated scores in several areas of player performance that combine to form an overall composite score representing a player’s talent (and by “talent,” which is a fairly nebulous term, I really mean something like “level of situation-agnostic skillset that is conducive to scoring fantasy points”). I then used those scores to identify players who are poor values in relation to their ADP in dynasty leagues.

I know that the #taeks in this article will not be as well received as those in my piece about best value running backs; the fact that I’m identifying players to fade based on ADP means I’m necessarily taking contrarian positions here, and writing negatively about players that lots of people like is naturally inflammatory. Just know that I don’t think any of these players suck (unless I say that, which I might), and I don’t even necessarily think any of them are incapable of being quality fantasy assets or returning value for where they’re being taken. My dynasty strategy is simply to bet on player talent first and foremost. And while I acknowledge that opportunity and situation matter a great deal, keeping player profiles independent of assumed volume or short-term environment in mind is good practice.

Without further ado, here are the worst-value running backs in dynasty, listed in order of ADP (from cheapest to most expensive): 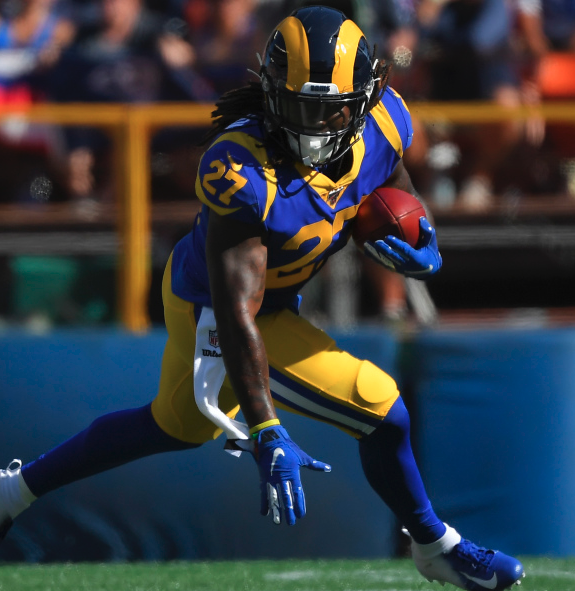 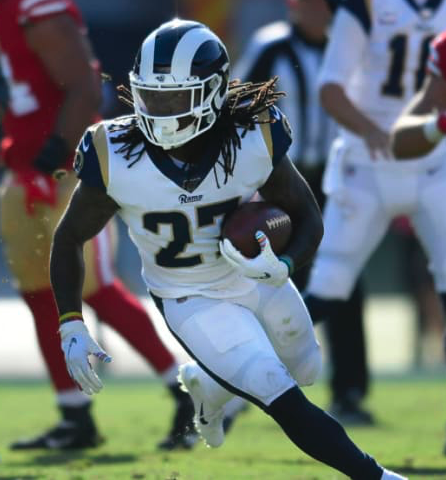 The composite scores shown above are representative of Darrell Henderson‘s disappointing rookie season — a year in which he was beat out for breather touches by Malcolm Brown and added essentially no value on the 43 touches he did receive — but there is a solid prospect profile lurking beneath the surface here, and to be completely clear, I believe Henderson is a talented player.

That stinker of a first year did happen though, and the weaknesses I saw in Henderson the prospect (a receiving skillset not good enough to compensate for less-than-ideal size) haven’t gone away. He’s sort of a poor man’s Tevin Coleman in that sense (which might make him a middle class man’s Bilal Powell or Ronnie Hillman), but with the superior Cam Akers now in Los Angeles, I don’t see Henderson delivering on his draft-season hype from a year ago any time soon.

Henderson is no longer being selected egregiously high at RB49, but I’d rather have Tony Pollard, Matt Breida (isn’t Breida just what we want Henderson to be?), Curtis Samuel, Jonnu Smith, or Duke Johnson, all of whom are going either later than (some significantly so) or within four picks of him.

There was no bigger fan of Sony Michel a year ago than me, but it is painfully obvious now that he is completely cooked.

Despite pre-draft evaluations likening him to Alvin Kamara and many preferring him to his college teammate Nick Chubb, Michel has been terrible in the NFL as both a receiver and runner. Through the air, he’s earned a target share of 2.9%, a 34th-percentile mark that is lower than Samaje Perine‘s career figure of 3.0%, and when balls do fly his way, he’s converted them into 4.6 yards per target, a 19th-percentile mark. On the ground, he’s underformed fellow Pats running backs in both yards per carry and 10+ yard run rate (his performances in those metrics rank in the 37th and 27th percentiles, respectively), and on his rare trips to the secondary, he’s converted just 14.58% of his 10+ yard runs into 20+ yard breakaways, a 25th-percentile display of open field running.

It’s unfortunate, but Michel’s simply a bad player, and allowing assumed volume to keep afloat the ADP of a bad player with supposedly-rotten knees who is tethered to a below-average group of surrounding skill-position players is just silly. I say this with no degree of exaggeration: nearly every player with an ADP in the twenty picks after Michel would be a better use of a roster spot than Michel himself. 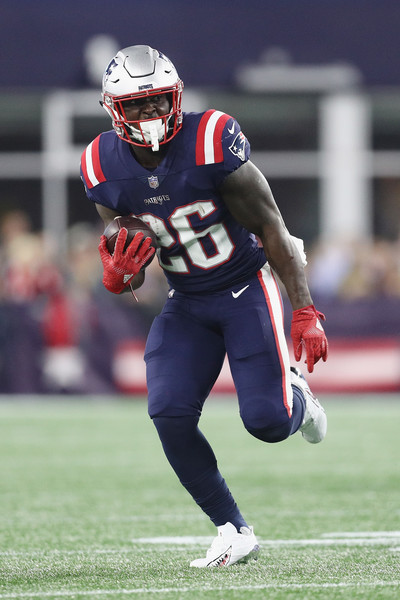 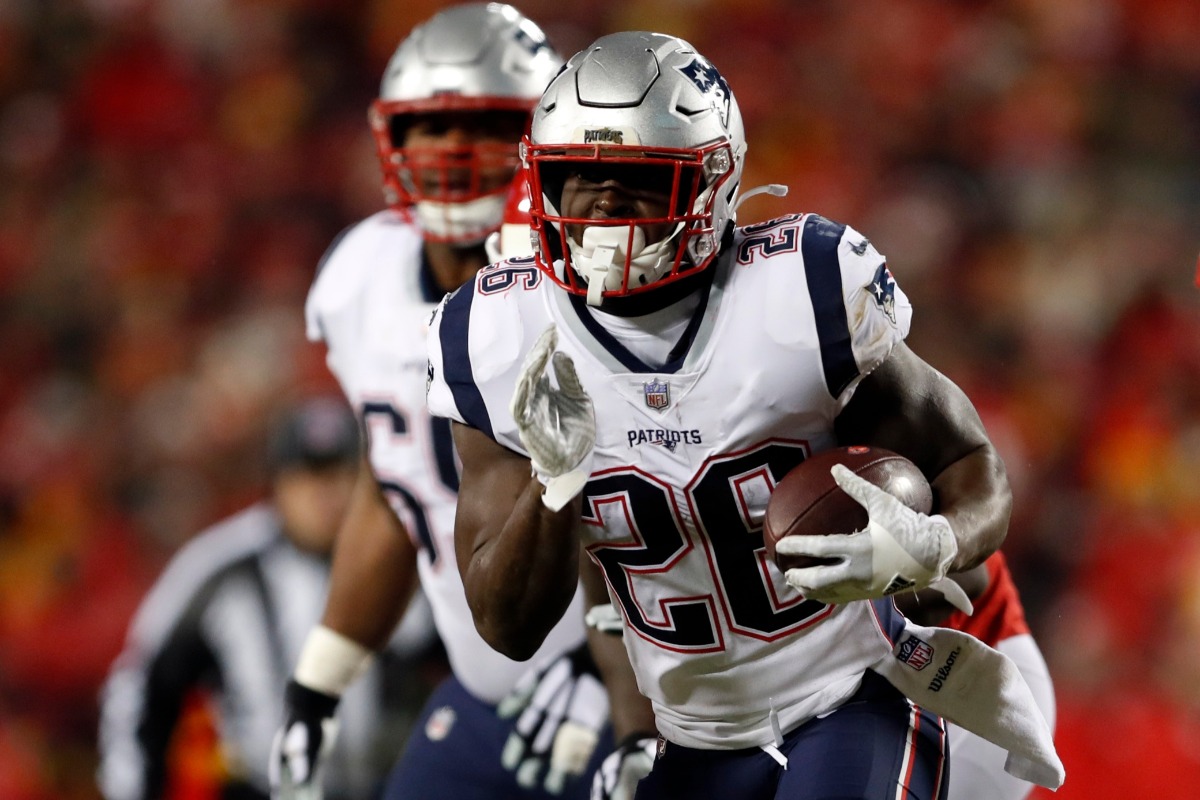 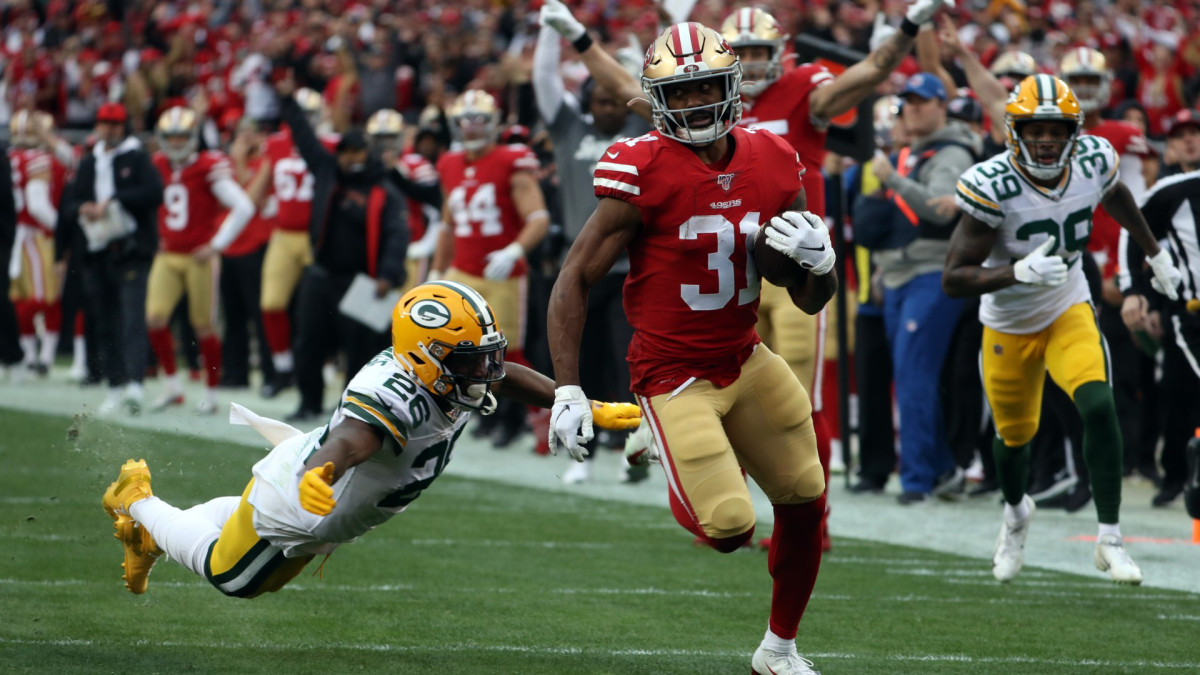 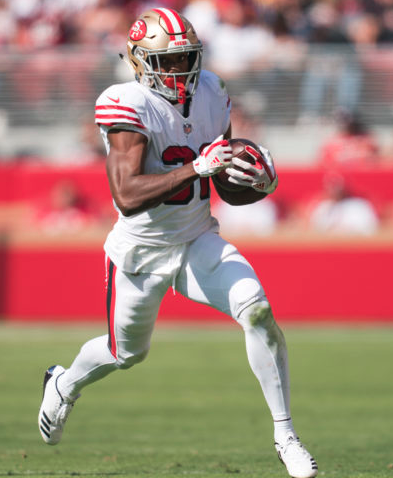 Have we learned nothing from Thomas Rawls, Alex Collins, and all the other Mackinaw Peach running backs who, like Cosmo Kramer’s miracles of nature, existed as fantasy starters for only a brief period before fading into obscurity?

Rostering Raheem Mostert through his late season breakout must have been something like having a circus in your mouth, but we need to get real. The best time to sell a 28-year old, 197-pound undrafted runner whose first game with at least 15 touches came in week 2 of his age-27 season, was immediately after he ran for 220 yards against the Packers in the playoffs, and then again when the 49ers didn’t invest heavily in the running back position in the draft, and then yesterday, and then right now.

He’s fast, he’s fun, and he plays on a team coached by Kyle Shanahan, but his ADP might be the worst thing I’ve ever seen. If your goal is to maximize the value of your fantasy team, it is irresponsible to be currently rostering Mostert. You won the lottery, now cash out.

Ke’Shawn Vaughn is a JAG+. He has decent size, he had a good college career, he’s an OK receiver, he’s a fine runner, and he has some positive athletic traits. There is nothing special about him as a talent, but he also doesn’t have any massive holes in his prospect profile, and for that reason he would likely be a successful and productive running back if given the requisite on-field opportunity in the NFL (as would most non-Kalen Ballage runners).

However, I don’t want to invest in a completely average player as if he is the 12th-best player in his rookie class (as his rookie draft ADP suggests) just because the team he was selected by has an underwhelming incumbent at his position and is quarterbacked by Tom Brady. Vaughn himself is underwhelming and it’s not a foregone conclusion that a (43-year old) Brady-led Tampa Bay offense is as rocketship emojis as is being assumed. 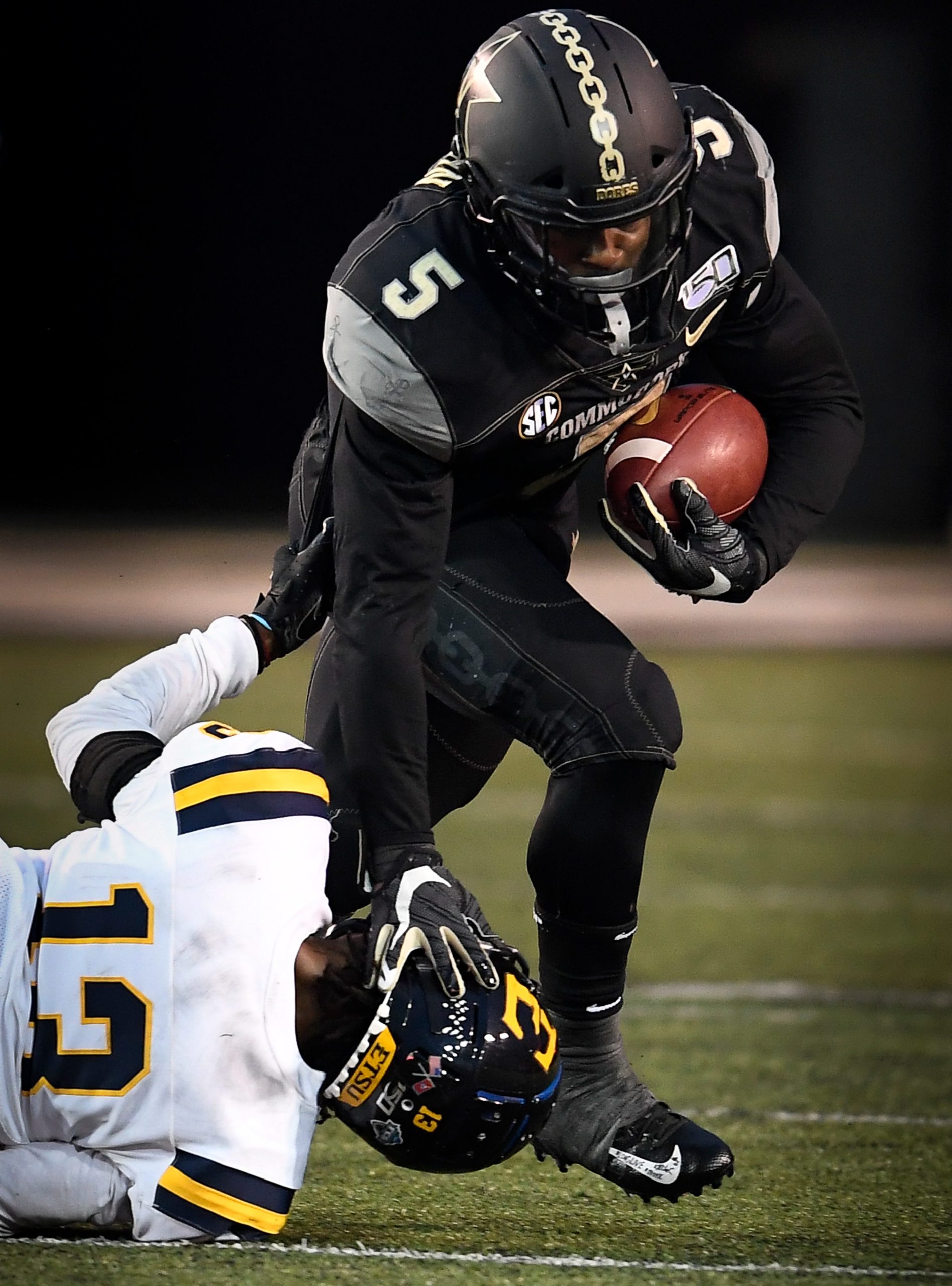 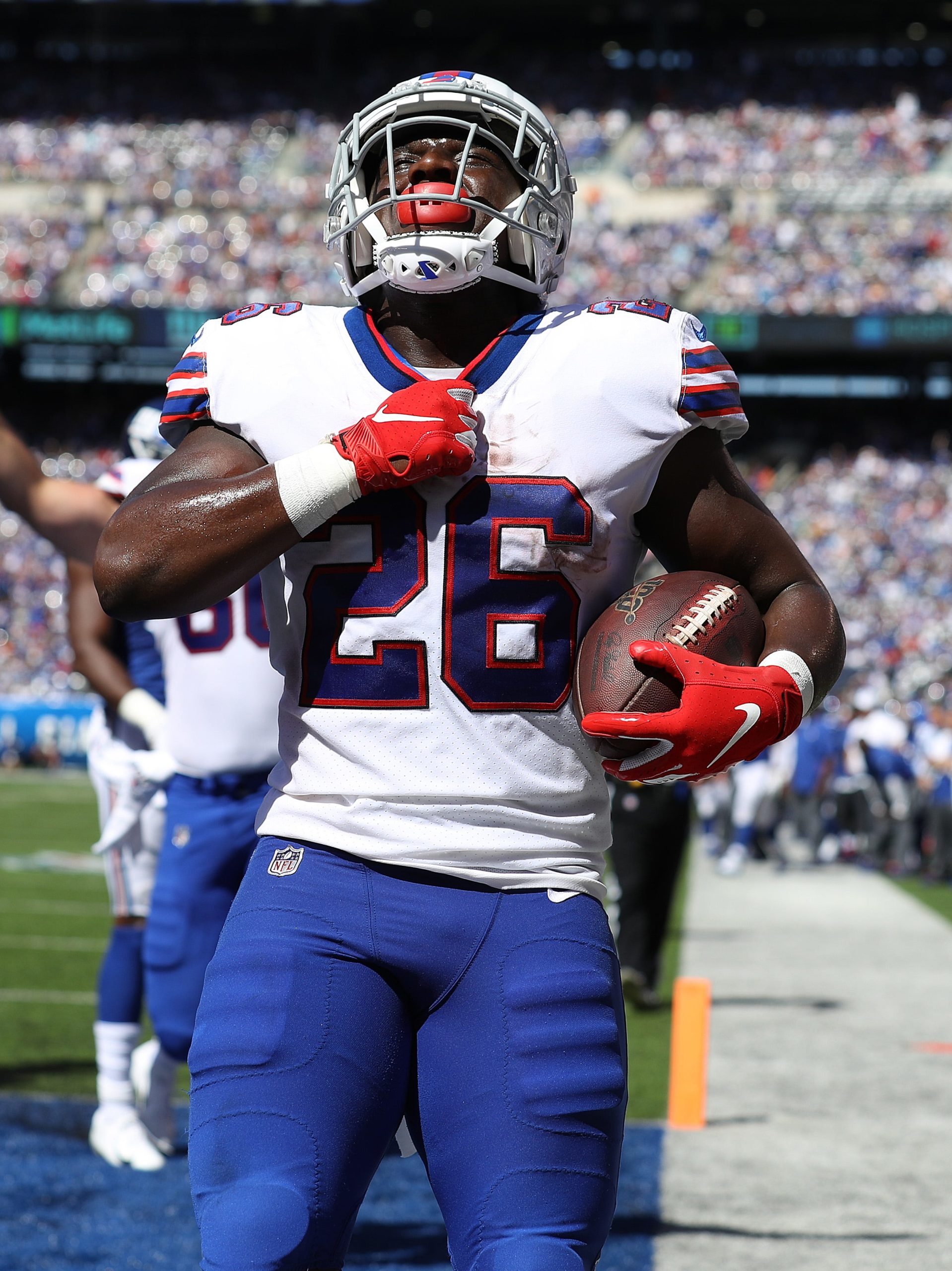 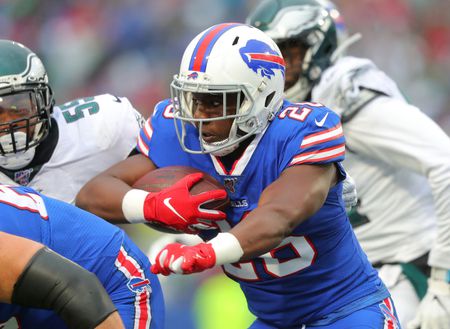 Devin Singletary was very impressive as a rookie, especially as a runner, as his performance in team-relative efficiency metrics like YPC+ and Chunk Rate+ (describing yards per carry and 10+ yard run rate vs. team rates) each rank in the 97th percentile. Additionally, his composite Rushing Efficiency Score in my model is actually the 5th-highest score among all backs with at least 50 carries going back to 2007.

His performance as a first-year player in the NFL is simply night and day from his college efficiency, though. (His performances in YPC+ and Chunk Rate+ at FAU rank in the 3rd and 28th percentiles, respectively.) Because of that discrepancy, I just want to see it again before I’m bought in on Singletary as a stud pro rusher. Short stretches of impressive efficiency can happen for players who are nonetheless not good, and I need more than one year of it to outweigh an entire college career.

The arrival of Zack Moss (not an elite player in his own right, but a serviceable obstacle) in Buffalo muddies things up for Singletary’s prospects even if we assume that what we saw in 2019 was legit. There’s just no way I’m taking Singletary over guys like Kareem Hunt, Derrius Guice, Adam Thielen, or Christian Kirk, though his current ADP shows that that’s happening more often than not.

Josh Jacobs was absolutely incredible as a rusher last season, with marks in YPC+ and Chunk Rate+ in the 94th and 92nd percentiles, respectively, among post-2007 draftees, and a performance in the open field that produced an 81st-percentile Breakaway Conversion Rate of 32.00%. His overall production was excellent as well, as his Dominator Rating of 26.2% landed him in the 83rd percentile among 21-year olds.

The issue, unexpectedly, with Jacobs’ role as a rookie was his complete lack of involvement in the passing game, as a player who was billed as an elite dual threat out of the backfield coming out of college caught just 2o passes while being out-targeted by two ho-hum satellite backs in DeAndre Washington and Jalen Richard.

If that’s the status quo going forward (as the Richard contract extension as well as the selection of all-purpose back Lynn Bowden Jr. in the draft suggest it might be), it’s hard for me to stomach the RB10 price that it costs to roster Jacobs. I like the player, but one-dimensional backfield roles in offenses led by Derek Carr are naturally capped below the heights we’d like to see Jacobs reach. 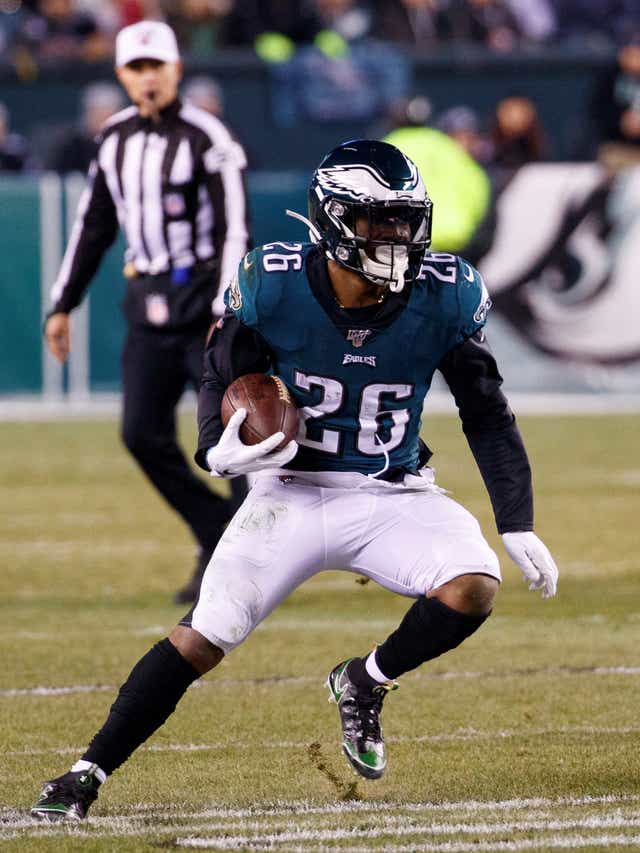 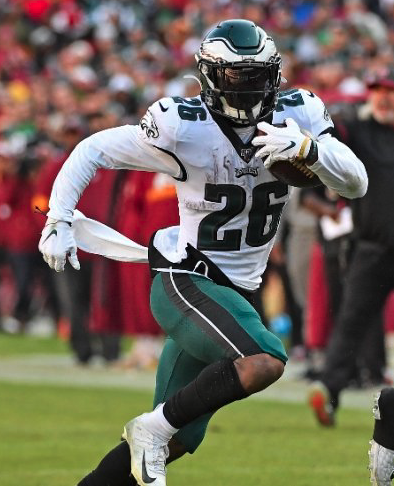 One year ago, Miles Sanders was a de facto top-2 running back in one of the weakest classes at the position in recent memory (I had him at RB1), and now that he flashed in a quality rookie season, we’re vaulting him ahead of guys like Jonathan Taylor in dynasty startups who, let’s be honest, nobody would’ve had behind Sanders if they had turned pro at the same time. Player X is not better than Player Y just because Player X entered the league first, and unless we have absolutely no conviction in our evaluations of players such as Taylor, Clyde Edwards-Helaire, JK Dobbins, and D’Andre Swift, I don’t see why I should prefer Sanders over any of those guys in dynasty if I think they are better prospects than Sanders was, which I do.

To ground my concerns about Sanders in some hard facts: he enjoyed an efficient season as as a first-year rusher, but his numbers were buoyed by a Breakaway Conversion Rate in the 78th percentile (which isn’t a negative by any means), while his per-carry efficiency at the first level of defenses lagged far behind his skill as a make-things-happen-in-space guy, as he underperformed other Eagles running backs in Chunk Rate to the tune of -3.14%, a 2oth-percentile mark. Sanders is still raw as a pure runner, and the Eagles are reportedly kicking the tires on the number of veteran backs who’ve been available this offseason — this doesn’t exude the same amount of confidence in Sanders’ potential to see workhorse touches as fantasy gamers seem to have.

The bottom line is that Sanders is a dynamic but flawed player who is being taken a round or half a round too high in startups (and in the first twenty or so picks, that’s fairly substantial). While I’m a little disappointed that I’m forced to take this position, the leap of faith that launches Sanders into the first round is too great for me to make.