Opportunity matters in fantasy football. It goes without saying that higher production is closely tied to a player’s opportunity. The Vacancy Report will shed light on open opportunities that help project the next breakout. In this series, I’ll give context to situations where a prospect can gain market share on his way towards becoming a Sunday contributor. Let’s start with the SEC. 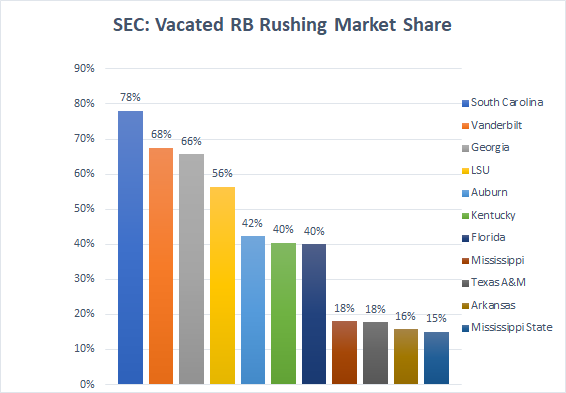 Running backs Tavien Feaster, Rico Dowdle, and Mon Denson leave behind a full workload for Will Muschamp’s 2020 squad.  Making this backfield even murkier, running backs coach Thomas Brown heads to the Los Angeles Rams’ staff.  Brown is a notable loss as his resume as a position coach includes Melvin Gordon and Nick Chubb.

Who remains?  David Cloninger, who covers Gamecock sports for Charleston’s The Post and Courier, believes, “A battle should be waged between sophomore Kevin Harris and true freshman MarShawn Lloyd.“  For devy purposes, you may want to set up your Google alerts for Lloyd.  If spring buzz is positive, he will quickly ascend devy drafts as he takes over lead-back duties.  Lloyd is the 2020 ESPN RB8, 247Sports’ RB5, and Rivals’ RB4.

As Ke’Shawn Vaughn climbs rookie dynasty draft boards, he leaves Vandy with one running back who has recorded more than 10 attempts in 2019, Keyon Brooks. The freshman assumed backup duties to Vaughn early in the year due to injuries at the position and then never let go of the 4.67 carries per game duties. Brooks also proved himself as a competent receiver, recording 16 catches to go with his light rushing workload. When Vaughn went down early against Tennessee in the Commodores’ 12th game of the year, Brooks shined for 104 yards from scrimmage, accounting for 37% of the offense in that small sample.

Vanderbilt will lack depth at the running back position in 2020, but that seems to be by design.  During head coach Derek Mason’s six previous seasons with the Commodores, he has always relied on one bell-cow.  Freshman Rocko Griffin or sophomore Ja’Veon Marlow will be involved, but Brooks will be the focus for devy after confirming he could handle the touches in the game against UT.

Not only does D’Andre Swift exit for the NFL, but Georgia also loses an additional 19% of the rushing share with Brian Herrien‘s graduation. Devy drafters have been monitoring this vacancy for two-plus years, when the consensus RB1 of the 2018 class, Zamir “Zeus” White, announced his commitment. But two ACL tears later, the addition of new top recruits to Georgia’s campus, and the fact that blue-chip prospects Chuba Hubbard, Najee Harris, and Travis Etienne all decided to stay in school for another year, has 2020 devy startup drafters finding White’s ADP stomachable when considering his ceiling as an RB1 in the 2021 draft.

As Georgia continues to make their case as Running Back U, the devy community appears to have fallen in line pushing Kendall Milton into draft consideration even before he steps on campus. However, upon closer look at devy rankings, drafts, and mocks, James Cook isn’t receiving the attention he deserves. Cook was co-awarded Georgia’s Offensive Most Improved Player for 2019 and projects to be the back operating behind White in 2020. Even more exciting for devy, Cook has already commanded opportunity as a pass-catching back and kick returner while sitting behind Swift, Herrien, and White.

Clyde Edwards-Helaire takes his 56% market share to the NFL and Joe Burrow leaves a surprising 115 rushing attempts back in Death Valley. This offense is likely to regress without Burrow in 2020. To make prospecting even more challenging, Chris Curry, Tyrion Davis-Price, and John Emery Jr. can all make a case for being involved moving forward. Curry has the 90-yard Peach Bowl performance to his credit. Davis-Price did well with the most opportunity behind CEH. And Emery Jr. is a 5-star recruit.

In a case of depth chart uncertainty for devy, my deciding factor for drafting becomes the draft pick cost. It is unlikely that Emery Jr. will go in the 2nd round of devy drafts, particularly since he has limited college production and is not the favorite to lead LSU’s backfield. Davis-Price, also a top recruit as 247Sports’ RB8, is going as late as round 8 in @devywarehouse’s early 2020 Superflex mocks after being Edwards-Helaire’s primary backup last year. Davis-Price is the Tigers’ running back to bet on at cost. He carries a similar ceiling as Emery Jr. does as LSU’s RB1.

For vacancy information on the Tigers, check out fellow Breakout Finder writer Corey Pereira‘s highlights as to the reasons why D.J. Williams is the best back to fill JaTarvious Whitlow‘s 42% vacancy. 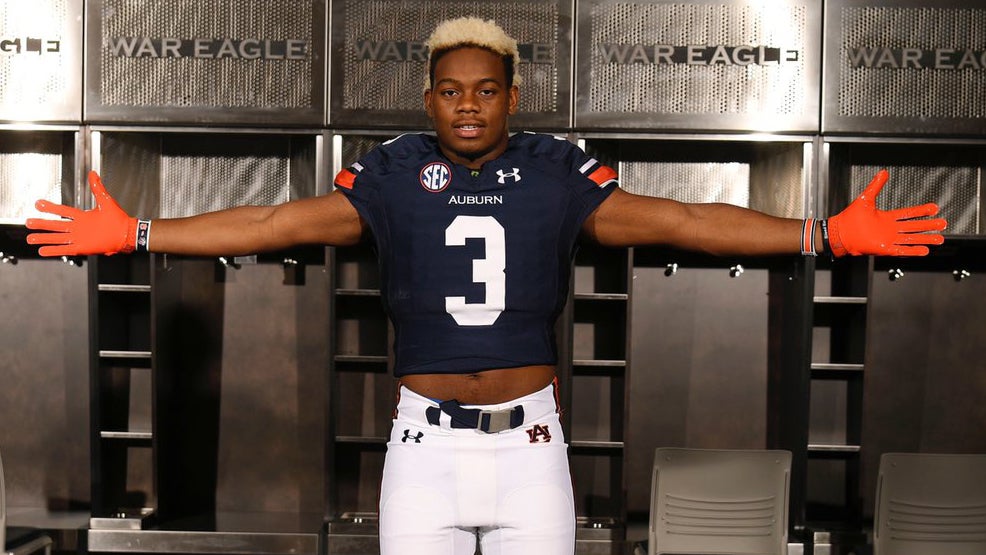 The Wildcats’ backfield is interesting as WR/RB Lynn Bowden Jr. heads to the NFL, opening 40% of the rushing share. However, Kentucky returns a three-headed timeshare to make up the remaining opportunity. Senior Asim Rose will receive RB1 duties early, but has not broken out and is not likely to in 2020 as sophomores Kavosiey Smoke and Christopher Rodriguez Jr. look to continue growing their share of the touches. Smoke and Rodriguez are interesting guys to keep on your devy radar, but without a clear path to owning the backfield until 2021, we should consider this backfield a wait-and-see situation.

The early 2020 SEC East favorite Gators lose 40% of their rushing market share with Lamical Perine leaving. However, they are another backfield to avoid when trying to lock in a guaranteed opportunity for your devy team. Dameon Pierce, a top 10 running back in the 2018 class, projects to be the lead dog, with Malik Davis and Lorenzo Lingard potentially being featured.

Pierce’s profile is concerning after a modest year as the RB2 in 2019 following a good freshman year as the RB3 on the depth chart. Jordan Scarlett, running ahead of Pierce in 2018, left for the NFL and Pierce saw his market share only rise from 15% to 18%.  It doesn’t help that Lingard has joined the roster. Lingard will need to receive a waiver from the NCAA after transferring from Miami, but he is interesting as a 5-star recruit in need of a change of scenery following a battle with injury last year. Among the class of 2018 prospects, Lingard is regarded as a better back than Pierce.

Complicating the Florida backfield further is the anticipation that Davis will improve after a rocky 2019 coming off of back-to-back seasons ending in injury. Back in 2017, Davis flashed as a freshman, accounting for 40% of the Gator’s rushing.

In this piece, Breakout Finder’s Noah Hills identifies why Jerrion Ealy‘s arrow continues pointing up after nearly breaking out as a freshman in 2019.  The Ole Miss backfield will remain Ealy’s in 2020, and he has the potential to dig into the 18% market share vacated by Scottie Phillips.

Isaiah Spiller came to College Station in 2019 as ESPN’s RB6, 247Sports’ RB9, and Rivals’ RB8.  Then, as a freshman, he dominated the Aggies’ backfield opportunities and finished 13th in yards from scrimmage in the SEC. Additionally, Cordarrian Richardson and Jashaun Corbin have transferred. All positive signs for Spiller.

I can’t wait to draft Isaiah Spiller in devy drafts next spring!

Eric Gray took over the Vols’ backfield late in 2019 as a freshman, and with opportunity late in the season, he proved to be the most talented back on the roster. However, neither Ty Chandler nor Tim Jordan transferred or left for the NFL. Gray will likely get more opportunities than Chandler and Jordan in 2020, but it is concerning that there is not a clear amount of touches available for Gray to gain. Gray is an exciting prospect, but he projects to miss the Breakout Report threshold again in 2020.