Why We Need To Be Punting In Best Ball 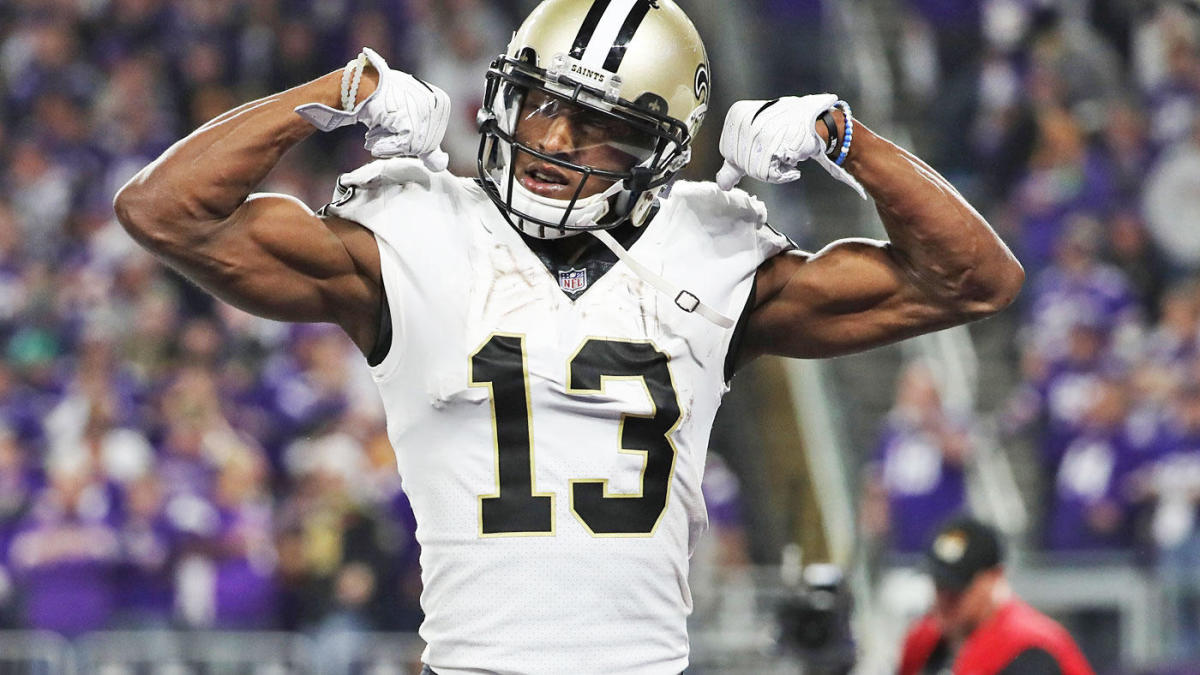 Reading the words punting and fantasy football in the same title probably has you thinking… “what kind of crazy shit has @itsharristime been up to during isolation?” “Have things really gotten that bad up North”? Don’t worry, you won’t need to know who Johnny Hekker’s backup is. I’m talking about punting wide receiver until later rounds of Best Ball leagues as a strategy. Sinking early round draft capital into WR1’s is a losing proposition for a shot at consistent winnings in Best Ball formats. We’ll start with the current WR1 and breakdown why even Michael Thomas isn’t a winning option, and then talk through some late round WR’s that will let you be able to take a shot at winning it all.

The allure of the alpha dog wide-receiver is tempting. The gaudy stats Micheal Thomas put up in 2019 are a testament to what volume can do at the WR position for fantasy purposes. Thomas put up 23.4 FP/G in 2019, eclipsing the next closest WR by nearly 4 (3.8) FP/G. Over 16 games, that is a whopping 60 point differential. This type of advantage at the WR position is one that had to lead many to fantasy greatness last year, right?

MT could have been the guy that anointed you champ of your season long or dynasty league championships. The story for Best Ball is different. In Best Ball, where roster construction can play off of the variance of player performance week to week by not having to predict the outcome of a roster spot, the production at WR is not as important as in other formats.

This doesn’t mean that a player like Michael Thomas isn’t a great contributor to your fantasy football team. He is. 100%. And I certainly don’t want to Tweet or write about it as I know he has no qualms coming after little ol’ me or a 6th year breakout WR in the NFL.

Even legendary performances are replaceable for WR’s

It’s just this folks: Even MT’s legendary production in 2019 can be replaced in the later rounds with volatile WR’s and potential breakout WR stars. Remember that Best Ball is about compiling powerful performances throughout the season. A WR that puts up four performances of 40 points over a season at a late round ADP is the same as a WR that consistently contributed an average of 10 points a game through a 16 game season. You will typically pay more for a “reliable” WR in ADP than the more volatile WR’s. Don’t fall into the WR floor trap as it will not help you win in Best Ball formats.

I keep picking on MT, but, he is the perfect example of why to avoid a high draft capital WR in Best Ball. In FFPC Best Ball drafts in 2019, MT had an ADP of 13. This made him the 3rd WR off of the board after D’Andre Hopkins and Davante Adams. Now, as has already been illustrated, MT outproduced all of his fellow WR’s by a wide margin in FP/G in 2019. Hopkins and Adams didn’t even come close to what MT was able to do on a per game basis. Most running backs in 2019 couldn’t touch Mike: only Christian McCaffrey out produced MT’s 23.4 FP/G.

Fantasy footballers that invested early draft capital in Michael Thomas were rewarded with consistent weekly production. What they missed out on however, was an early round RB that provided a solid weekly floor that is much harder to replace in the later rounds. When you look at the comparable RB’s at ADP in 2019 to MT at 1.13, Dalvin Cook (1.18) is the best example of why to fade an alpha WR like MT.

Let’s take a peek at season long win rates (of players drafted at least 200 times) from Rotoviz in regards to Cook and Thomas, and then I’ll break down how it is possible that taking lower scoring RB’s actually helps teams win. 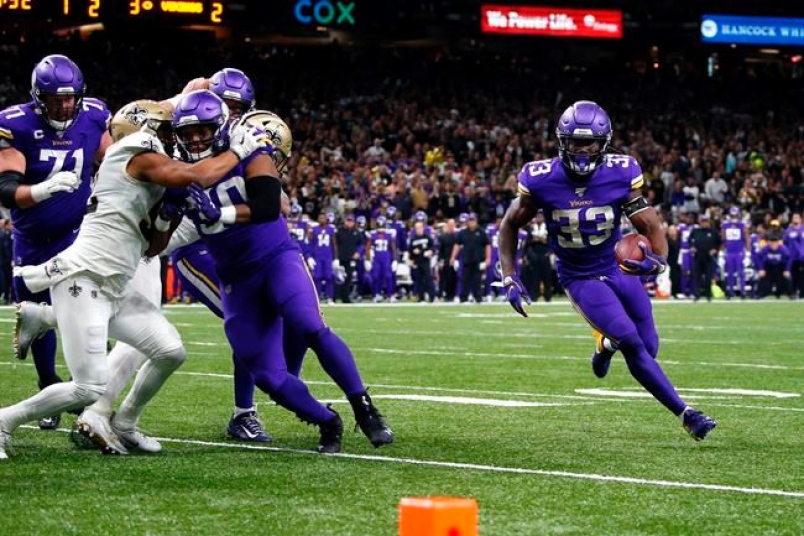 Having The WR1 Doesn’t Matter In Best Ball

Now wait you must be saying: “If I drafted Thomas though, and a team I’m playing against drafted a player like Cook, I’m outscoring them by over 40 points over a full season with my first-round pick. How the hell does that team beat me?”.

This is because the roster builds of taking WR early, thwarts you from building a strong RB base. RB production is harder to come by in the later rounds. Of the top 15 scoring running backs in 2019, 13/15 had an ADP lower than 50. The two that didn’t? Breakout star Austin Ekeler and late season rookie league winner Miles Sanders. Still, even Ekeler (90.3) and Sanders (82.8) had ADP’s under the top 100.

Looking at the group of the top WR’s, you have two that weren’t even drafted within the top 150 in 2019. Those accolades belong to DeVante Parker and John “Smokey” Brown. Remember, there only 2 RB’s in the top group that were drafted outside of the TOP 50.

You might be thinking to yourself, well, itsharristime, 2019 was an outlier in terms of WR production because of the rich WR draft class. Terry McLaurin, A.J Brown and Deebo Samuel all made immediate impacts on what may prove to be on of the best WR classes we’ve seen for fantasy purposes.

Not one of those rookies even cracked the top 15.

2020 produced another legendary WR class with CeeDee Lamb, Jerry Jeudy, Jalen Reagor, Justin Jefferson, Henry Ruggs, Brandon Aiyuk, Michael Pittman, Denzel Mims and Laviska Shenault who are all set to have prominent roles with their respective teams. With this WR draft class following a generational performance from the 2019 WR rookie class, how will it impact fantasy drafts in 2020?

It further saturates the WR ranks, and, should push value even further down draft boards. What we are seeing though from early FFPC Best Ball drafts doesn’t necessarily reflect that. Michael Thomas is currently coming off the board at 5.4, Davante Adams (12.6), Tyreek Hill (16.6) and Deandre Hopkins (16.7) are all routinely being drafted in the 1st round of early Best Ball drafts. You can use these market inefficiencies to your advantage.

This early round draft capital should be plugged into RB’s as they allow for a more consistent floor in a harder to replace position in the later rounds. Best Ball players have to resist the temptation of a Michael Thomas, or even a Davante Adams or Julio Jones in the first two rounds. It’s tough to say no to both their floor and ceiling play, but, drafting an Ezekiel Elliot, Alvin Kamara, Dalvin Cook, Derrick Henry, Josh Jacobs, Joe Mixon in the 1st round and then a Aaron Jones, Kenyan Drake, Nick Chubb or a Miles Sanders in the 2nd round will be a path to success in Best Ball for 2020. The RB rookie class that though impressive, does not have one clear cut RB1 in terms of landing spot. Clyde Edwards-Helaire, Jonathon Taylor, Jonathon Swift, J.K Dobbins, KeShawn Vaughn and Cam Akers all find themselves in RBBC’s, and, we will not know how these will unfold until after our Best Ball drafts. The unsure situations of these talented backs will only further the importance of investing draft capital in early round running backs in 2020. With the influx of elite talent at the WR position and muddied rookie backfields, this will only further the ability to find WR value in the later rounds of your Best Ball drafts.

Here are the WR’s that allow me to go early round RB in Best Ball and will help you win Best Ball leagues and cash in 2020:

What if I was to tell you Marvin Jones Jr. outscored Odell Beckham Jr, Davante Adams and Terry McLaurin last year? You’d probably think I was nuts or knew exactly where I was going with this. MJJ’s 139.9 points last season ranked him as the 19th WR in the league in 2019 for FP/G. His ADP last year? 104. And after being a top 20 WR? 126.8. It makes no sense.

It is especially head scratching considering that Detroit added only Quentez Cephus from the WR rich 2020 draft, and, added no notable free agents to their pass catching corps. With the return of a healthy Matthew Stafford, and a continued commitment to push the ball down the field (38.4 attempts p/g in 2019), things are setup for Jones to continue to produce. Jones boom weeks, such as Week 7 vs Minnesota (43.3 FP), will be worth the ADP price alone. Even baking in some negative TD regression (Jones scored at a 14.5% clip in 2019), Jones is a must own in Best Ball.

What are your thoughts on owning a high upside WR on a Top 5 offense? What if it could be had in with an ADP over 120?

That’s exactly what you are getting in Pittsburgh sophomore receiver Diontae Johnson. Coming off a season where he had no Ben Roethlisberger, and was receiving passes from arguably the most dismal QB duo in the league in Devlin Hodges and Mason Rudolph, DiontBAE still flashed. Diontae’s catchable target rate (81), target quality rating (86) and ADOT (83) were all amongst the worst in the league among qualified receivers. That Johnson was able to put up top 30 numbers (#1 target separation, #16 true catch rate, #24 YAC), shows he was making the best out of a bad situation. He put up 4 games of over 15 FP while facing true #1 coverage and receiving passes from the worst QB situation in the league. With a healthy Big Ben back in 2020 and JuJu Smith-Schuster being at 100%, there is no reason to believe that Johnson takes another step forward in year two. At his current ADP of 121.4 in FFPC Best Ball drafts, Johnson is a late round WR that will help you build an early RB corps and vault you to season long success.

The 9th and 10th round seems to be the sweet spot for high upside WR’s in early Best Ball drafts. That’s where you will find Slayton, nestled right beside his fellow sophomore Diontae Johnson.

Slayton, who many scratched their head at after being drafted by the Giants in the 5th round of the 2019 draft, turned heads in his first year in the league. He developed a clear rapport with rookie QB Daniel Jones, and was second only to A.J Brown in rookie TD’s with 8 in his first season and 4th amongst all WR’s. Slayton’s 95th percentile speed score created space for him to get open for Danny Dimes, who ranked #12 in the league per PlayerProfiler. “Money Throws” and #2 in “Danger Players”. Jones ability to throw YOLO balls in a high tempo passing game (Giants ranked #7 in passing plays) bodes well for Slayton in year two. The only concern is what new OC Jason Garrett will bring to the table in 2020.

Slayton’s “boom” weeks were outer worldly. The Giants WR put up two weeks of 30+ FP, and Best Ball owners that DID draft Slayton in 2019 (congrats to the 22 of you), were handsomely rewarded with an 18% season long win rate. Let that trend continue in 2020 when you snag him in the 9th to 11th round of Best Ball drafts.