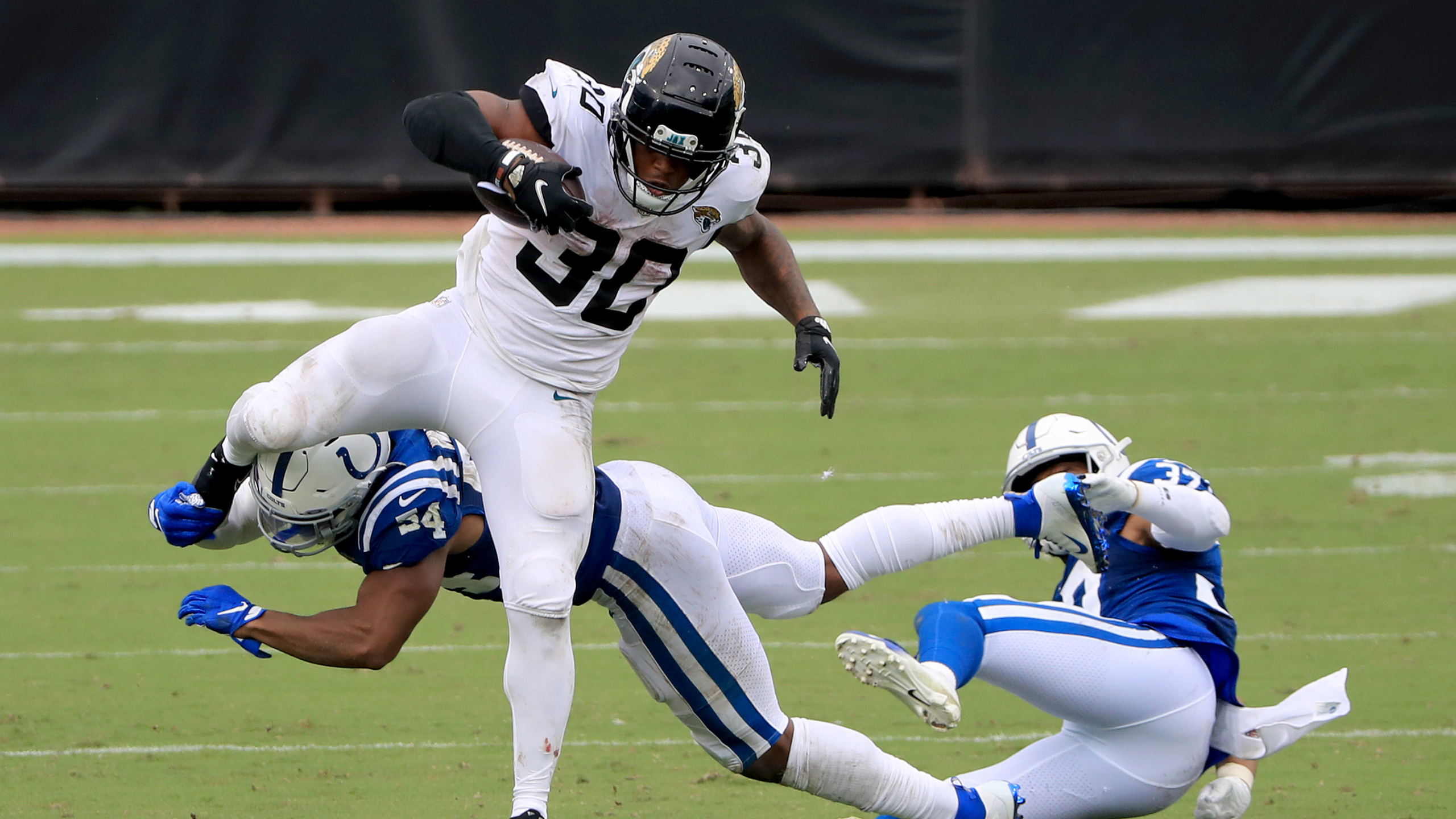 While the draft day focus will be on the incoming rookies, dynasty players will have their eyes on a few volatile veterans who could significantly gain or lose value depending on which players their teams draft or do not draft. ADPs will be moving. Which players stand to gain the most?

A player can go from being a locked in RB2 to a Flex with just one pick. On the flip side, a Flex or bench asset can see their value rise by what their teams do not do. In the NFL, only the truly elite players have job security. The next starter is always one pick away.

In this article, we identify a few dynasty and redraft landmines. When Roger Goodell starts off the NFL Draft with the words “with the first pick, The Jacksonville Jaguars select….,” our outlooks on these players can dramatically change.

Of any player to make this list, James Robinson is easily the highest-ranked player in Underdog ADP and had the most productive 2020 season. So far this offseason, the only RB Jacksonville has added is 30-year old Carlos Hyde. Robinson’s job seems to be safe- for now. But with a brand new coaching staff and five of the first 65 selections in the draft, The Jaguars could add a significant threat to his 2021 value.

If he avoids a Day One or Day Two selection, Robinson should see his ADP rise. If the Jaguars add a high-level RB such as Najee Harris, or even a pass-catching back like Kenny Gainwell, his ADP will trend down significantly.

Myles Gaskin came out of nowhere last season to finish No. 10 among qualified running backs with a 16.4 Fantasy Points per Game average. Entering his third year, the former seventh-round pick has been an afterthought for many dynasty and redraft players. He dodged the Aaron Jones bullet in free agency, and only has Malcolm Brown to deal with as of now..

There are draft pundits with Miami as a potential landing spot for Najee Harris, and the Dolphins are continually mentioned as a team that will add a RB on draft day. However, if Gaskin can avoid a Day One or Day Two draft pick, his ADP should easily move up into the 60s. He showed good ability as a receiver, and Brian Flores trusts him.

Last year, Edmonds finished the RB33 in Fantasy Points per Game, though he did excel in the passing game with 53 (No. 7) receptions on 68 (No. 6) targets. Underdog Drafters are bullish on him, pushing his ADP into the early sixth round. A late spring signing of James Conner is his only current competition for RB touches.

A high draft pick at RB would sharply drop Edmonds’s value, but like Myles Gaskin, if he avoids a Day One or Day Two selection, Edmonds would be a trendy pick for teams that do not want to draft their RB2 early.

For TE Premium players, Anthony Firkser entered the radar last season. He was second fiddle to Jonnu Smith, but had only two fewer receptions (41-39), and saw some work in the slot when Adam Humphries missed time. Smith and Humphries, as well as WR2 Corey Davis, have all moved on. Right now, Firkser has experience, familiarity and trust from Ryan Tannehill.

Most Fantasy Points Per Snap

A former basketball player, Firkser is an athletic and capable receiver who can put up nice reception totals if Tennessee does not add a TE on draft day that can challenge for his spot.

An afterthought behind Cooper Kupp and Robert Woods, Josh Reynolds had career-highs in receptions and yards in 2020. He then signed a free agent deal with Tennessee as the presumed replacement for Corey Davis as the WR2 in the Tennessee offense..

Josh Reynolds had the quietest 600 recYds season and now sits at the WR2 slot in the Titans’ depth chart.

Ty Johnson is currently the RB1 in NYJ, and flashed when given a heavy workload in 2020.

Two guys I’m ahead of consensus on in Underdog best ball drafts, and you can get

If the Titans do not draft one of the many strong Day One or Day Two WRs, Reynolds should be a trendy late round pick and can return value in a high-scoring offense.

Jalen Reagor had a disappointing and injury-plagued rookie season in Philadelphia. He only played in  11 games and only had 31 receptions. He never saw more than eight targets in any game.

Last year’s No. 21 overall draft pick, Reagor can have a major rebound in 2021 as the defacto WR1 in Philly. Fantasy gamers will have more confidence in his role if the Eagles do not use their first round pick on a WR.

Much like the Dolphins, Pittsburgh has been targeted as a team most likely to use a high draft pick on a RB. If they do not use a Day One or Day Two pick, Anthony McFarland would be in a real competition for touches and see an ADP boost. This one is a long shot, but McFarland is the most dynamic back currently on the roster.