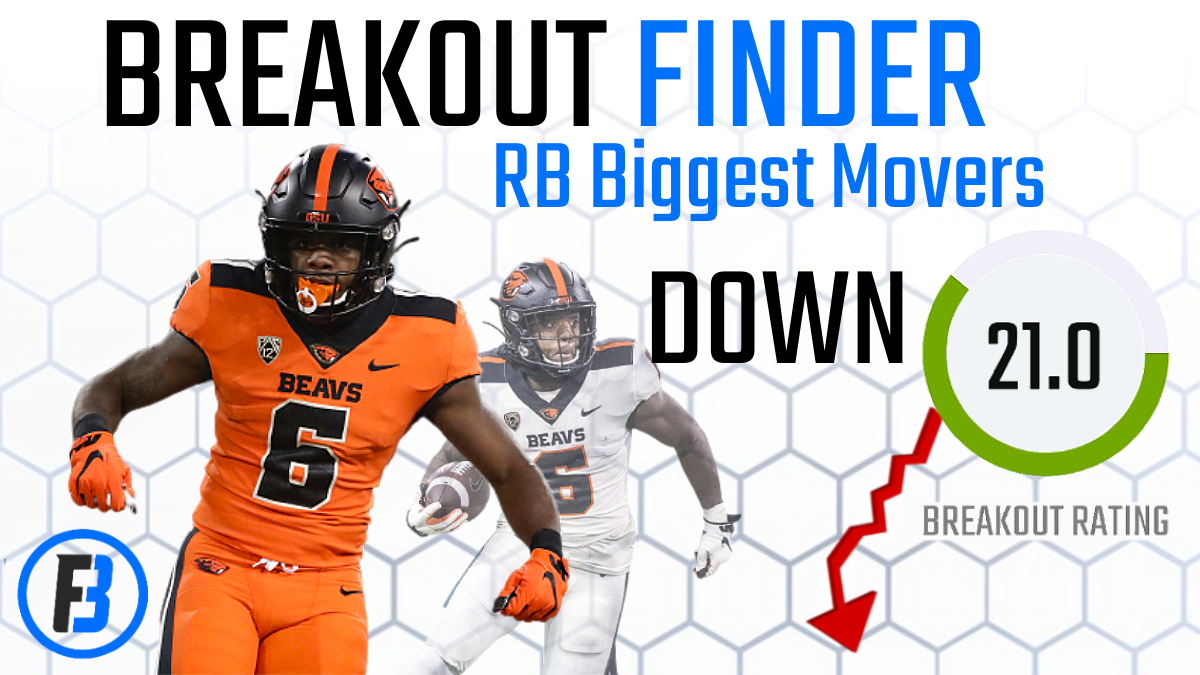 This article will focus on the three biggest fallers at the RB position.

After sitting behind Darrell Henderson and Tony Pollard in 2018, Kenny Gainwell was given the reins in 2019 and did not disappoint. He demonstrated excellent receiving chops, tallying a 13.8-percent (91st-percentile) College Target Share. And as all Memphis runners do evidently, he gashed defenses for 6.3 (80th-percentile) College YPC. There was understandble buzz surrounding him heading into 2020. Unfortunately, he opted out of the season, robbing us of another monster year.

Without a 2020 season to lean upon, Gainwell needed a big offseason to propel him up the draft board, but it didn’t materialize. At 5-8 and 201-pounds with good receiving ability, he already looked the part of a satellite back, and only average athletic testing solidified that as his ceiling. His lack of agility, as seen in his 11.72 (18th-percentile) Agility Score, and size-adjusted speed, with his 96.3 (50th-percentile) Speed Score, leave much to be desired. Ultimately he landed in Philadelphia, praying to steal away the Boston Scott role, as a Day 3 (5.06) pick.

Jermar Jefferson was an electric freshman at Oregon State. He caught 25 passes, showing off respectable receiving skills, and tallied nearly 1,400 rushing yards. He dipped a bit as a sophomore, but came back strong in six games as a junior. Ultimately, he ended with a 6.1 (75th-percentile) College YPC average and a 32.7-percent (76th-perentile) College Dominator Rating. Production was never the issue with Jefferson, and it’s impressive that he flourished at such a young age. He’s still only 21 years old.

Which 7th Round running back has the highest upside in Fantasy? 👀

Jefferson should, however, cut out of his life the person who suggested that he test at his Pro Day. Yikes. At only 206-pounds, he at least needed to be as athletic as Kenny Gainwell, but he utterly flopped. His 4.65 (32nd-percentile) 40-Yard Dash is bad, but the 89.9 (5th-percentile) SPARQ-x is the cherry on top of this sad sundae. The Lions ended his slide on Day 3 by using a seventh-round draft pick on him, but he looks like a poor man’s Jamaal Williams. Ironically enough, he’ll be playing behind Williams in Detroit as he fights for spell carries.

The Breakout Finder app has been Officially updated 💎

It was close, but Travis Etienne is your RB 1️⃣

Check out the rest of the 2021 RB/WR Prospects NOW ⬇️https://t.co/FKpFe9cA0D pic.twitter.com/CWWcuwvtAv

Javian Hawkins balled out in 2019 with over 1500 rushing yards, and built upon that success in a shortened 2020 campaign. Most importantly, he demonstrated decent receiving ability, catching 16 passes in eight games. At his 5-9, 183-pound size, he must excel in this phase of the game if he hopes to stick around in the league for long. He also flashed above-average athleticism, with an encouraging 11.20 (74th-percentile) Agility Score and 4.51 (75th-percentile) 40-Yard Dash.

The main issue besides his size is that the league didn’t seem terribly excited by what he has to offer. Going undrafted, and eventually picked up by the Falcons, he has an uphill battle towards fantasy relevancy. He is certainly no James Robinson, who at least looked the part of a workhorse. The diminutive Hawkins will need to flash in camp, and even then it’s hard to see him demanding a hefty workload. Fortunately, the Atlanta depth chart is weak, but there will always be concerns about whether or not he can stand-up to the punishment of the NFL, especially with a 27.0 (4th-percentile) BMI.