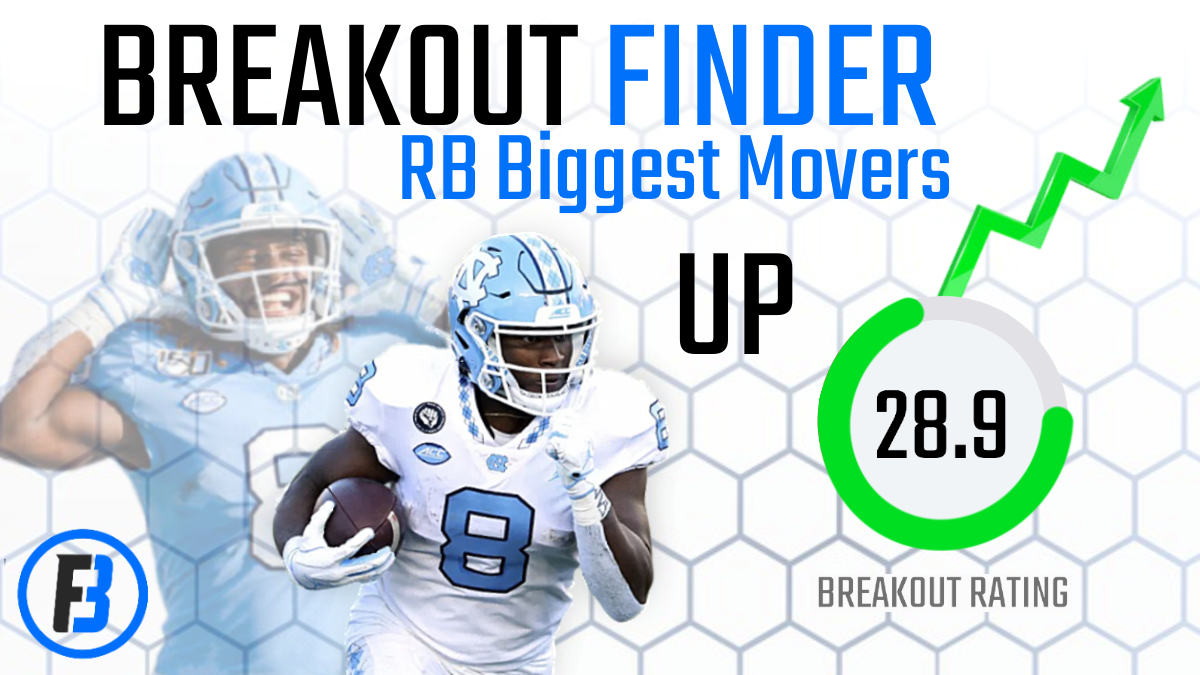 This article will focus on the three biggest risers at the RB position.

Broncos GM George Paton on Williams: “We just think he’s a special back. A three-down back. Really good on first and second down, he can pass protect, he can catch the ball out of the backfield. Just an incredible teammate, incredible off the field. He’s a ‘gift player.’ We call guys ‘gift players’ that are exceptional off the field as well as on.”

After Najee Harris and Travis Etienne went in the first round of the NFL Draft, day two’s focus turned to the consensus RB3 of this class in Javonte Williams. He was selected early in the second round with Denver seeing an opportunity to add a franchise RB, trading up to select him at No. 35 overall. Williams is only 21 years old, ran a 4.57 40-yard Dash at his Pro Day, and is a solid 212-pounds. He is an early entry pick from UNC, where his record-setting junior year propelled him into the day two draft capital dynasty players love to see.

Williams set a UNC record with 22 total TDs (19 rushing). PFF had him as their highest-graded RB in all of college football. An extremely efficient player, he led the nation with 75 forced missed tackles and was third in the country with 72 runs for first downs. Melvin Gordon is still around, but Williams looks to be the back to roster right away in Denver. His UnderDog ADP of 62.7 seems justified and should rise as the summer moves along. He can become a three-down back with workhorse potential early in his NFL career.

49ers GM John Lynch on Sermon “You look at our backs in the past and I think one common element is the speed. And you may look at his 40 time and say he doesn’t really fit, but sometimes 40 times can be deceiving. I think what speaks to us is that his [10-second split] time was very good. And you can see that burst. You see that ability to stick his foot in the ground, break tackles and hit it in a hurry. And then he’s very adept at making the free safety, the second-level defender miss and he’s really good out of the backfield in the pass game as well. I think he’s a good fit for what we do.”

Trey Sermon ended his Ohio State career with an exclamation point. He rushed for an absurd 331 yards in the Big Ten Championship win over Northwestern, and followed it up with 193 yards and a TD in the BCS Playoff win over Clemson. His 524 yards in a two-game stretch broke Ezekiel Elliott’s Buckeye record of 476 yards. These last two games were the exclamation points in the book of Sermon, a former Oklahoma Sooner who transferred to Columbus as a grad transfer. He had a solid Pro Day, running a 4.61 40-yard Dash at 215-pounds. He had nice results in the 10-yard split, vertical jump and 3-cone drill.

Do you believe in Trey Sermon?🥶

While his late season performance and Pro Day numbers were impressive, draft capital and landing spot have propelled Sermon up dynasty rookie draft boards and redraft rankings. The San Francisco 49ers traded two fourth-round picks to move up to the late third round, using the No. 88 overall pick to draft him. With the addition of Trey Lance and the sound offensive mind of Kyle Shanahan, Sermon has a shot at winning the starting RB job as a rookie. He could potentially see a large role on one of the league’s better offenses.

The Breakout Finder app has been Officially updated 💎

It was close, but Travis Etienne is your RB 1️⃣

Check out the rest of the 2021 RB/WR Prospects NOW ⬇️https://t.co/FKpFe9cA0D pic.twitter.com/CWWcuwvtAv

Jets GM Joe Douglas on Carter: “Mike’s a special athlete. His tape is as fun to watch as any tape you’ll see in this draft. And his ability to make people miss, his explosive acceleration, stop-start ability, open field run skills, balance-contact balance- it’s very unique.”

As impressive as Javonte Williams was at UNC, he was not their leading rusher. That honor belonged to Michael Carter, the fourth round draft pick of the New York Jets. Carter led UNC with 1,245 yards rushing and averaged 8.0 (97th-percentile) College YPC. He also added 82 catches in his UNC career. A shifty 5-8, 201-pound back, he received some high-end comparisons to fellow Tar Heel Giovani Bernard during his draft evaluation process. He followed up his impressive UNC career with a great week at the Senior Bowl.

Michael Carter had over 1,600 all-purpose yards in 2019 and 2020, leading the North Carolina backfield 🚀 pic.twitter.com/ISEPJwmm3O

Historically, fourth round RB selections have poor hit rates in fantasy football. While many were disappointed that Carter fell to day three, his landing spot is ideal. His competition in New York will be veteran Tevin Coleman, third-year back Ty Johnson, and second-year back La’Mical Perine. This is a wide open backfield and Carter should have a chance to establish an early role. He could be used similarly to Bernard or New England’s James White as a pass-catching back. He showed great ball security at UNC with only one fumble over his junior and senior seasons, and could quickly earn the coaching staff’s trust. His skill set matches up nicely with Zach Wilson‘s.