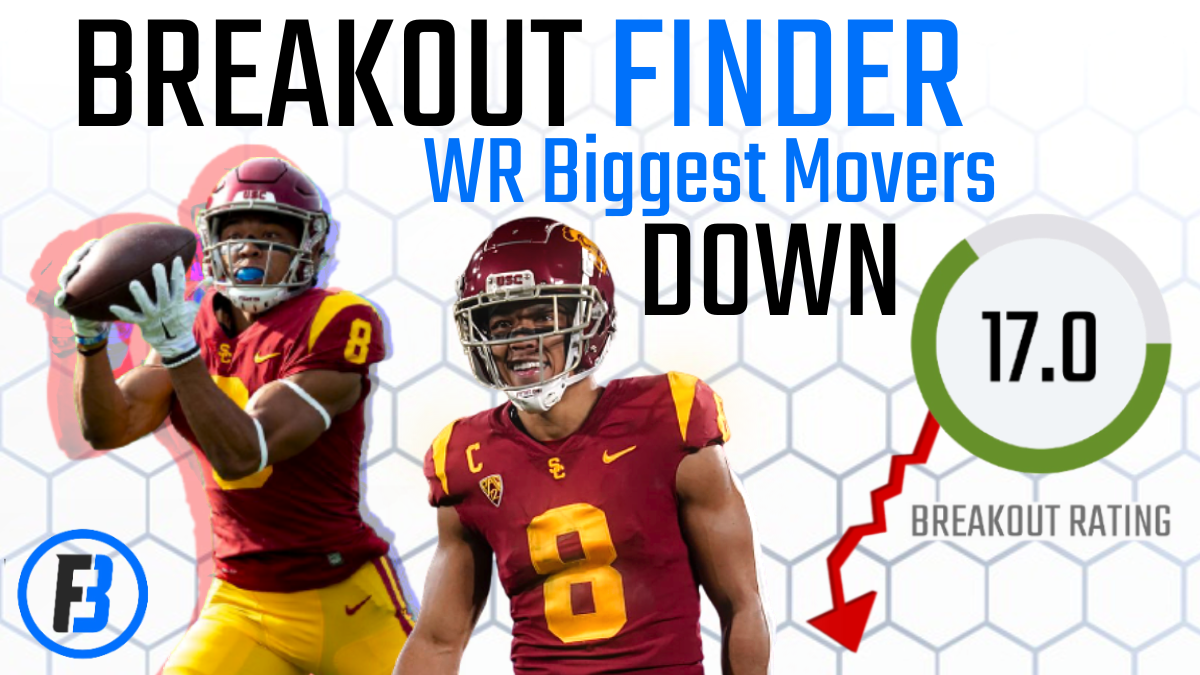 This article will focus on the three biggest fallers at the WR position.

Rashod Bateman burst on the scene as a freshman tallying 51 catches for 704 receiving yards and six touchdowns playing alongside fellow NFL receiver Tyler Johnson, earning himself an impressive 18.8 (93rd-percentile among qualified wide receivers) Breakout Age. He followed up with a dominant sophomore season, and in a 2020 junior year free from Johnson’s target competition, wrecked Big Ten defenses before opting out for the remainder of a lost Gophers season. Bateman clocked in with a 40.0-percent (81st-percentile) College Dominator Rating and a 35.7-percent (98th-percentile) College Target Share , making him an obvious target for teams in the first round. He does compare favorably to Stefon Diggs on PlayerProfiler, after all.

Unfortunately for Bateman’s stock, he landed in Baltimore and was only average in his athletic testing. Potential fantasy owners will need to consider the impact of Lamar Jackson throwing passes to Bateman. Not only is the volume likely to be lower, but Jackson is only an average to below-average passer. Bateman also failed to stand out with his 93.0 (47th-percentile) Speed Score and 11.30 (42nd-percentile) Agility Score. He’s a good prospect, but comes with plenty of bust risk.

Amon-Ra St. Brown, like Rashod Bateman, was a precocious producer, logging an 18.9 (91st-percentile) Breakout Age in a Power 5 conference. He caught more passes as a freshman (60) than junior Michael Pittman (41). And while Pittman overtook him the next season statistically, St. Brown eclipsed 1,000 yards. The shortened 2020 season was still a success for St. Brown. He reeled in seven scores in only six games, finishing his collegiate career with a respectable 33.1-percent (62nd-percentile) College Dominator Rating and a 22.6-percent (63rd-percentile) College Target Share.

Amon-Ra St.Brown had 750 Receiving Yards as a True Freshman at USC 🤤 pic.twitter.com/LGQZtHD5hu

Regrettably, the off-season was unkind. St. Brown tested poorly outside of a 129.0 (86th-percentile) Burst Score, slogging his way to a 4.66 (14th-percentile) 40-yard Dash. He also fell down draft boards, finally landing in Detroit on Day 3. While the depth chart is favorable, he’s no sure-thing to emerge as the No. 1 given his athletic profile and draft capital. Even if he were to manage a starting position, he’ll be playing on a tanking franchise with Jared Goff behind center, limiting his overall upside.

See how the 2021 WR Prospects compare to past classes NOW ⬇️https://t.co/FKpFe9cA0D pic.twitter.com/LWU8opWaYR

The theme here is a wide receiver who broke out early at a Power 5 conference, but underwhelmed athletically and landing in a sub-optimal spot. Tylan Wallace did not break out as a freshman, but his sophomore season was special. In 2018, at 19.3 years old, Wallace went nuts at Oklahoma State for 86 catches for 1,491 receiving yards and 12 touchdowns, and never looked back. He nearly reached 1,000 yards in a nine-game campaign in 2019 and performed similarly in the 2020 season. Production was never an issue since he was the focal point in the Cowboys passing attack, en route to a 42.3-percent (86th-percentile) College Dominator Rating.

The issue for Wallace is his slight frame at 5-11 and 194-pounds paired with poor athletic testing. He managed a lowly 88.0 (30th-percentile) Speed Score with a 112.1 (9th-percentile) Burst Score and 11.37 (33rd-percentile) Agility Score. This undoubtedly led to his slip into Day 3, landing in a now-crowded wide receiver room. Not only is the passing volume low in Baltimore, but he will need to carve out a role alongside Rashod Bateman and Marquise Brown, as well as athletic marvels Miles Boykin and Devin Duvernay.