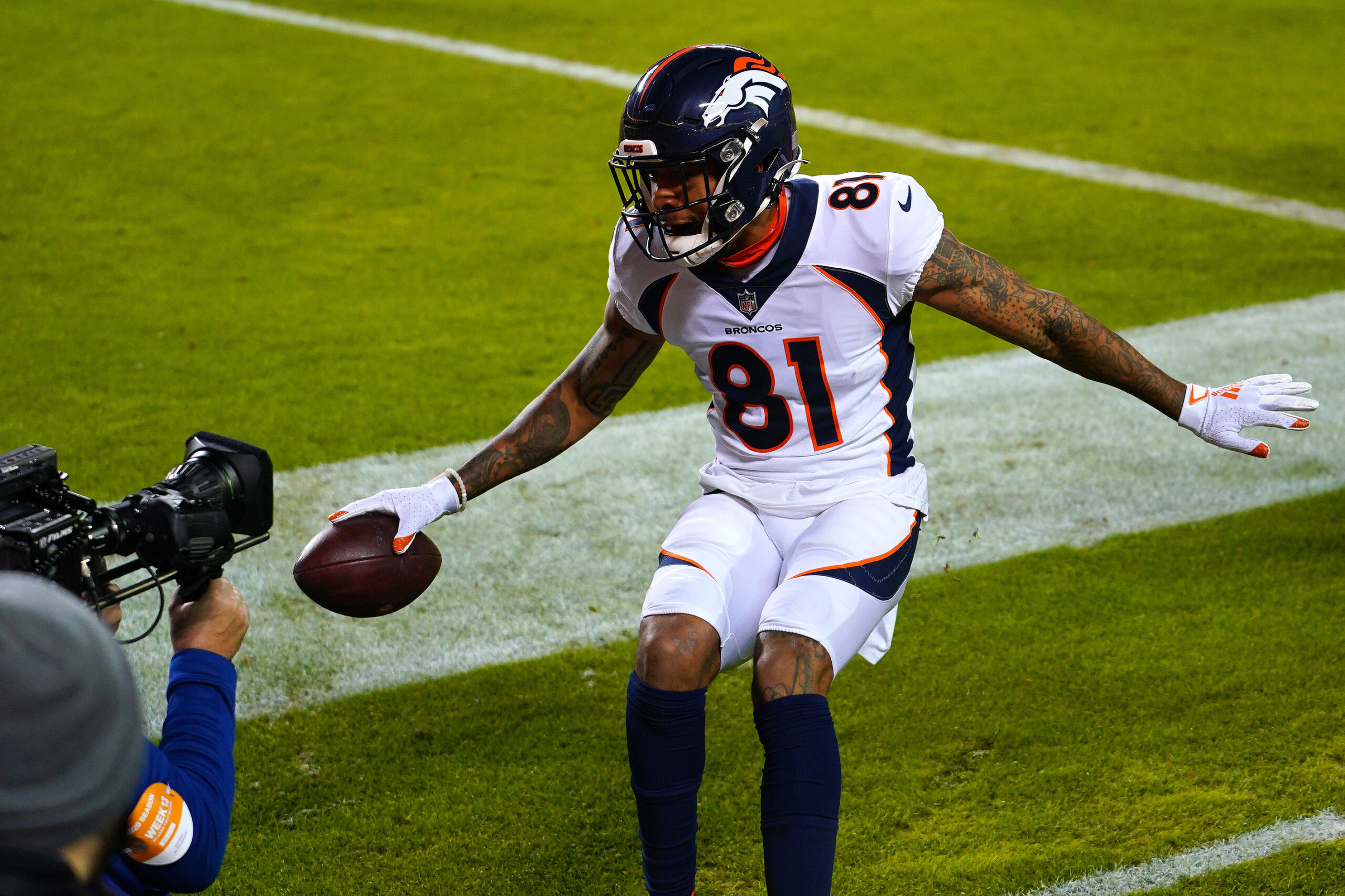 Have you ever looked at an NFL depth chart and wondered:

“What on earth is going on here?”

Perhaps it’s because the quarterback is struggling throwing the ball like in New England, and so no one is really standing out. Perhaps it’s because there is so much talent that it’s hard to predict consistent production and irritating volatility ensues like in Pittsburgh. These murky situations have many variables and require close inspection.

The sooner we get an idea of how things may play out, the quicker we can act, getting a jump on our league-mates and accruing value. In some cases, clear “buys” and “sells” emerge. In others, the smart thing is to wait it out until we get more information in the offseason.

And so, with that in mind, let’s talk about the Denver Broncos. 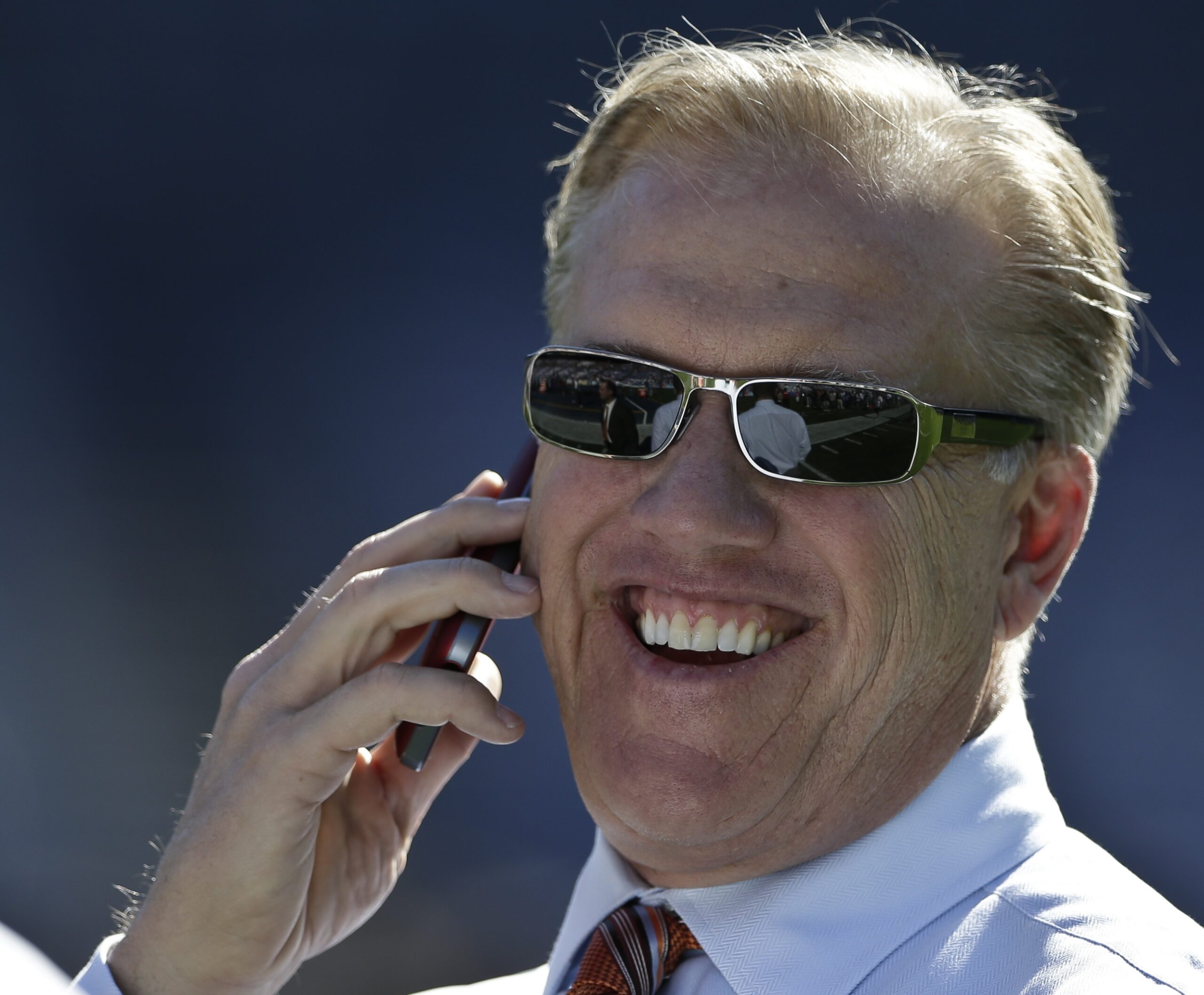 Since taking over as GM in 2011, John Elway has made some curious decisions surrounding his old position.

After one memorable Tim Tebow-led playoff run (hey, they beat the Steelers!), Elway shifted gears and signed recently released Peyton Manning. Manning led the Broncos through some magical seasons and retired after the 2015 season. So far, so good.

Going into the 2016 draft it was obvious that Elway needed to land a passer, and with the 26th pick he settled on Paxton Lynch out of Memphis. Lynch was a disaster, starting only four games in two seasons. Denver cycled through the likes of Trevor Siemian and Case Keenum from 2016 through 2018. In 2019, Elway again was in search of a cornerstone piece for his offense (he did curiously pass on Josh Allen, Josh Rosen, and Lamar Jackson in 2018). In the second round of the ’19 NFL Draft, Elway found “his guy”:

Drew Lock, the gunslinger from Missouri. There was “hope” in the city of Denver. 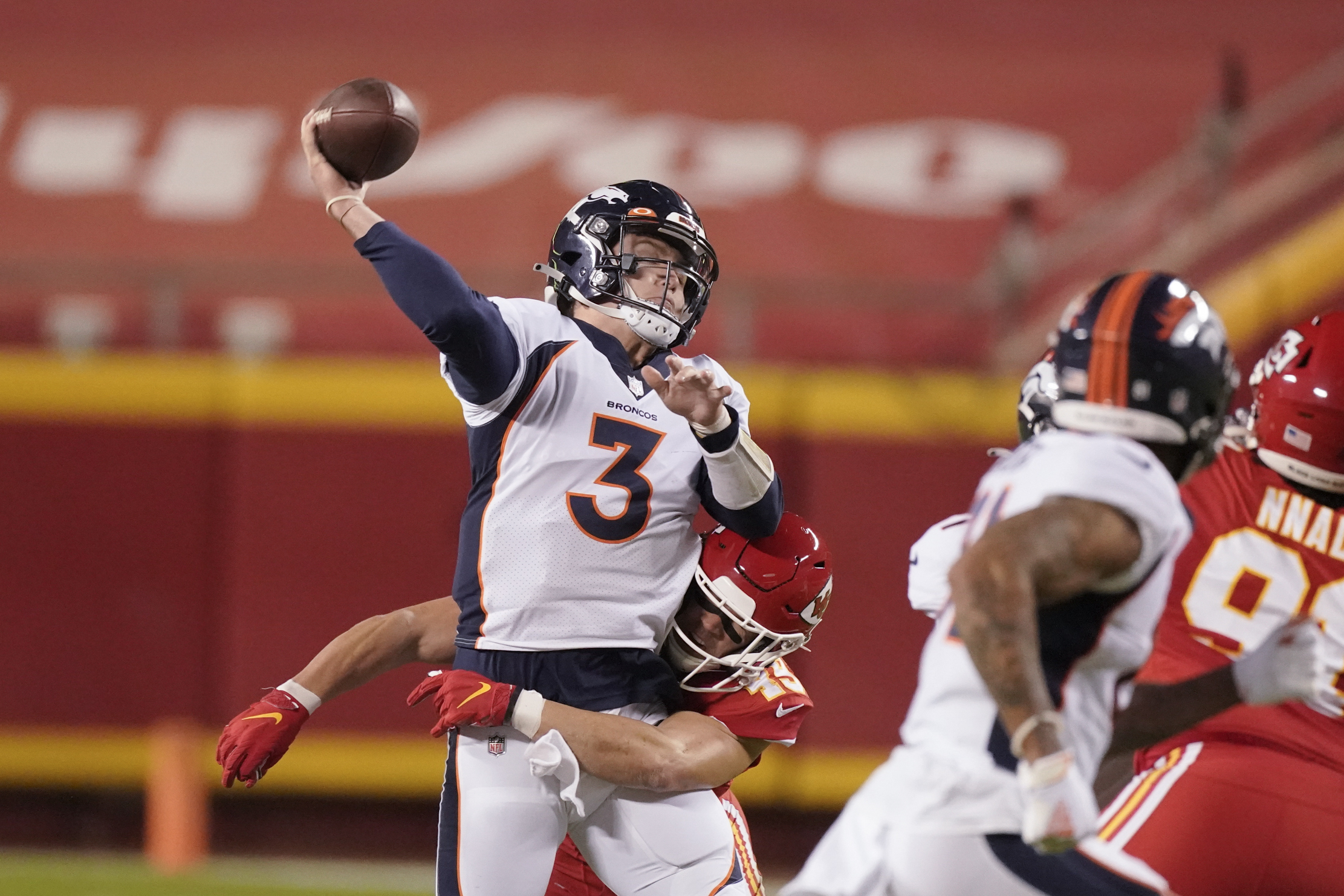 But, you see, the thing is this: Lock is a mess.

Despite going 4-1 as a starter in 2019 after taking over for Joe Flacco, Lock wasn’t particularly effective. Outside of a great Week 14, Lock experienced growing pains, failing to hit 13 points in his other starts. He struggled with a 7.0 Accuracy Rating (No. 47) and didn’t rack up many yards or touchdowns.

I get it, he was a raw rookie, getting a feel for the game.

This 2020 season for Lock, however, hasn’t looked much better. It’s encouraging that he is slinging it with 9.3 Air Yards Per Attempt (No. 2). And yet, despite the fact that his receivers are consistently gaining separation with their 1.85 Yards of Target Separation (No. 4), Lock keeps missing. His True Completion Percentage of 61.0 (No. 38) and Catchable Pass Rate of 67.9-percent (No. 38) just isn’t getting the job done.

It’s hard to give up on a player so quickly, but I just don’t see it with Lock, because unlike [Josh] Allen, he doesn’t have first-round capital. Maybe Elway is just bad at quarterback evaluation (really, he just hasn’t taken swings early in drafts). Or — and hear me out with this — Elway is trying to ensure that he will go down as the greatest Bronco quarterback of all-time!

Regardless, the quarterback situation makes investing in Bronco receivers tricky. And yet, this offense is loaded with talent (we can’t forget about Noah Fant), legitimately a quarterback away from being incredibly fun. So, let’s tackle this receiver room to see how to handle things as this season comes to an end and the offseason begins. 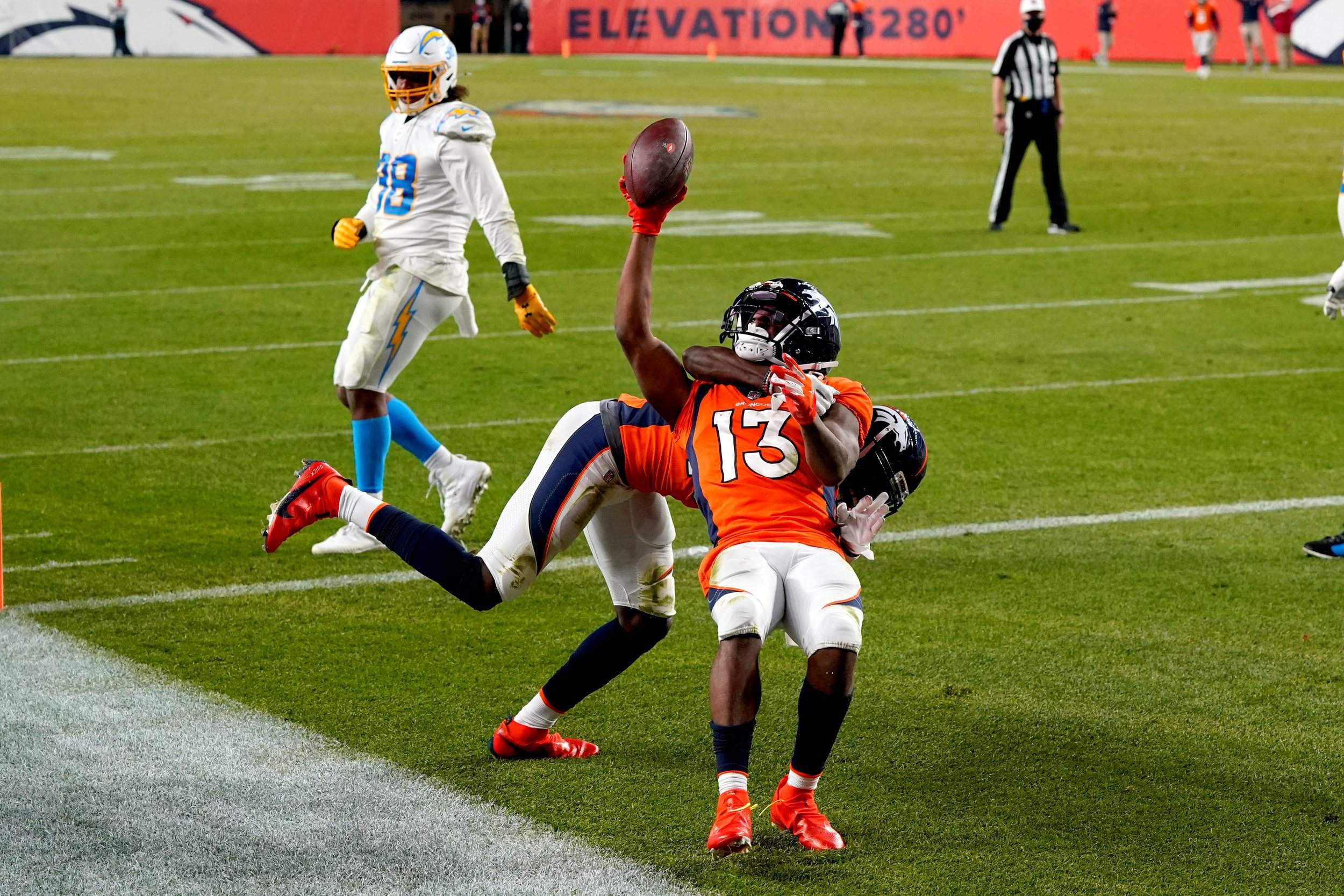 You just snagged these players months back in your rookie drafts — now what?

Coming out of Pennsylvania State, we knew Hamler could fly. He claims to have run a 4.27 40-yard dash. Unfortunately, we were robbed of a show at the Combine due to a hamstring injury. That alleged blazing speed, paired with a solid 25.5-percent College Target Share (65th) and 16.1 YPR (70th), led to the Broncos nabbing Hamler at the 2.14 in the 2020 Draft after already taking Jerry Jeudy in the first.

He also earned a respectable 31.4 Breakout Rating on THE BREAKOUT FINDER.

Unfortunately, we just haven’t seen much from him this year.

It’s safe to say that we don’t have enough on Hamler to make a strong statement one way or another. 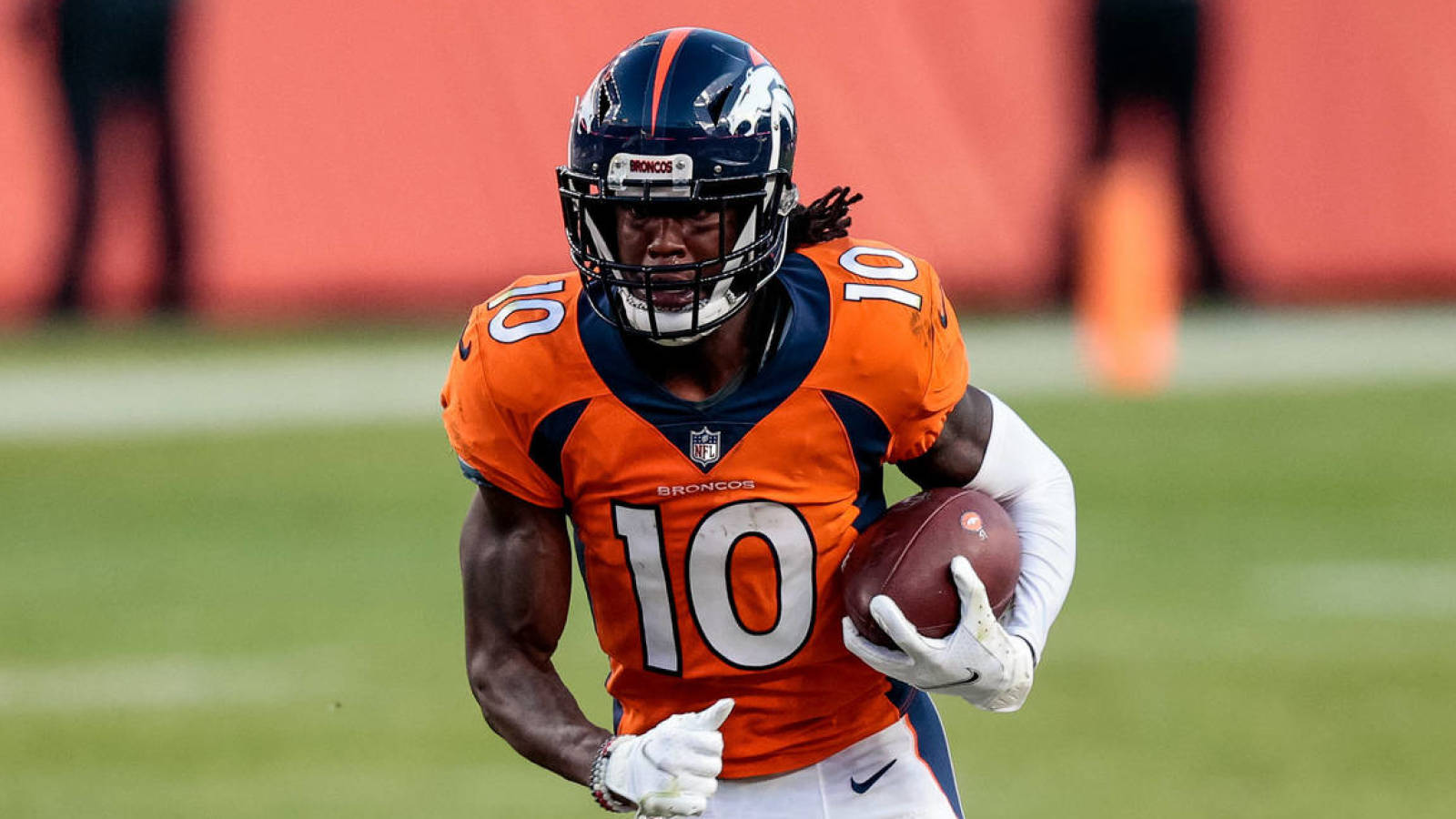 When Jeudy was taken at the 1.15 by the Broncos, the only surprising fact was that teammate Henry Ruggs III was taken before him.

Jeudy was a precocious stud at Alabama. He lit the fierce SEC competition on fire with a gaudy 68-1315-14 stat line as a sophomore. Most impressively, he put up great numbers competing for targets with Ruggs, DeVonta Smith, Jaylen Waddle and Irv Smith Jr. leading to a 49.3 Teammate Score and an overall Breakout Rating of 39.6.

Add in a 4.45 40-yard dash (80th) and route running skills that film grinders fawn over and Jeudy checked most of the boxes we want for receiver success.

And yet, in 2020, Jeudy is getting lapped by Justin Jefferson, Tee Higgins, and Chase Claypool.

With Dak Prescott healthy and throwing the ball, CeeDee Lamb was looking like Jerry Rice. Donovan Peoples-Jones is making me as a Browns fan forget about Odell Beckham Jr. (okay, sorry, I got a little excited after that gorgeous touchdown against Tennessee last week). Regardless, with all of these receivers showing out, Jeudy has come off as underwhelming.

With Hamler, I was going into the season with low expectations as he was taken after Jeudy and the Broncos still had good veteran options, but Jeudy was supposed to be polished and ready to smash. What happened?

Sure, Lock has been bad, we covered that already; it bears pointing out that Jeudy has a miserable 4.2 Target Quality Rating (No. 104). But it’s not all on Lock as Jeudy has struggled to separate like he did at Alabama as evidenced by his 1.67 Target Separation (No. 42). Outside of one exceptional game against Atlanta’s matador defense, Jeudy just hasn’t excelled like many thought he would.

It’s not all sad and depressing, though. As we know, Air Yards matter. And that’s the one area where Jeudy has been elite.

Even though his target share is lacking at only 21.0-percent (No. 36), Jeudy has tallied 1191 Air Yards (No. 4) on 21 Deep Targets (No. 5). Unfortunately, he has a staggering 753 Unrealized Air Yards (No. 2), but that gives us hope that as he and Lock (or maybe more ideally, a rookie in 2021) develop rapport, they will convert more often. We want to give rookies time to develop — but need something to show us better things are ont he horizon. For Jeudy, that’s Air Yards. 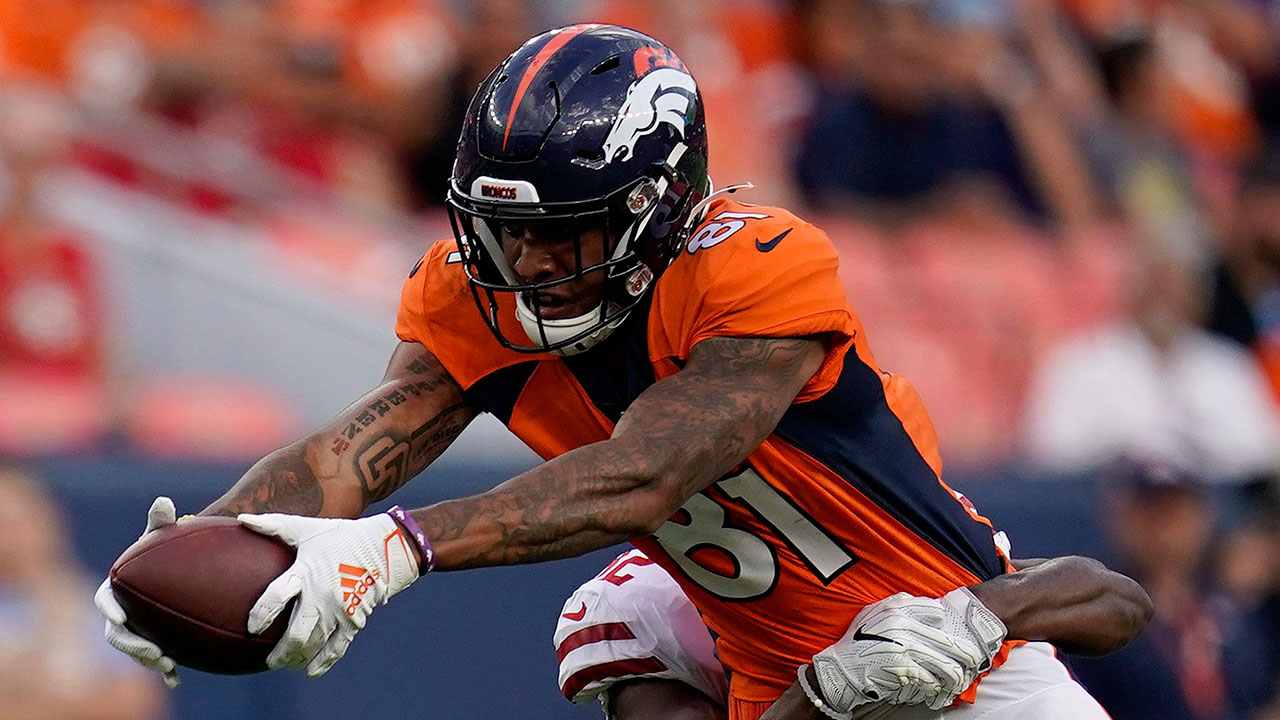 There’s more pages to the story here, which could lead to some easier decisions (in theory)

Heading into the season there wasn’t much hope for Tim Patrick.

The Broncos had taken Jeudy and Hamler in the draft and Courtland Sutton was coming off of a 72-1112-6 sophomore breakout. Patrick, for what it’s worth, hadn’t shown the Broncos much in either 2018 or 2019. He seemed to be depth and nothing more — but what do we expect from an undrafted rookie from Utah?

And yet, despite all odds, Patrick has been great this year.

Assisted by a Week 2 Sutton injury, Patrick seized the moment. He has outperformed Jeudy in every way besides not catching deep passes from Lock and “getting in his conditioning”. He’s been good on Contested Catches, pulling in 61.1-percent thrown his way (No. 14), no doubt helped by his impressive 10.22 Catch Radius (87th). Additionally his Target Premium of +50.3-percent (No. 1) and 35.3-percent Dominator Rating (No. 5) show he’s playing the best football of his career by far.

So what to make of Patrick? You’ve got him on your roster, and now what? He’s been great this year, but is he truly Adam Theilen-ish, the elusive undrafted third-year breakout? Or just a flash in the pan?

Patrick certainly doesn’t have age going for him, as he is much older than the other receivers in the receiver room. He also doesn’t have the draft capital of Jeudy, Hamler nor Sutton, and the Broncos themselves were signaling that they didn’t think too highly of him entering this season. For Patrick to succeed in Denver, he will have to be quite the outlier. If you don’t believe in Jeudy, Hamler, and Sutton, then Patrick might be your guy, but there is a high chance that he will never have this much value again in his career. 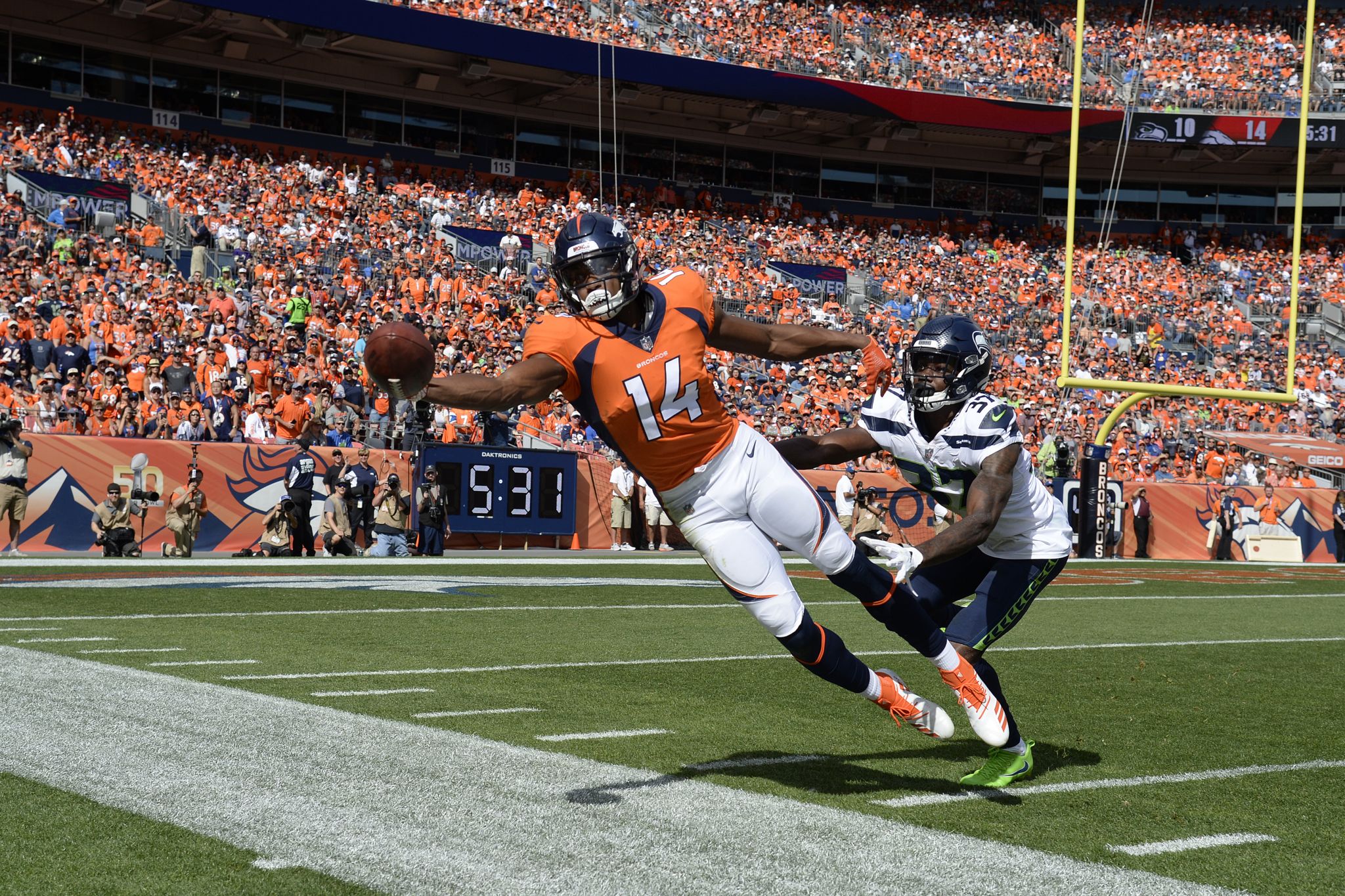 Coming out of Southern Methodist, Sutton looked like Alshon Jeffery in a great way. Quite simply, he had the goods. His production was solid.

His athleticism was excellent. 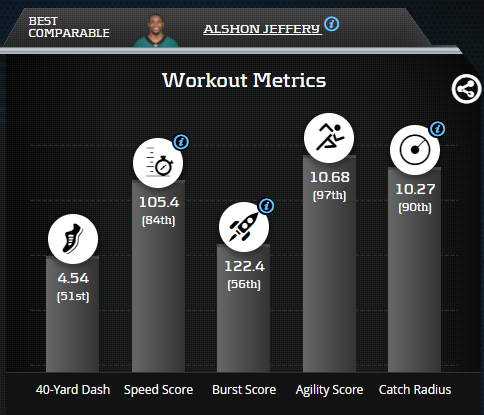 And, on top of that, he had second round draft capital to go with it. Sutton understandably earned a tantalizing 43.2 Breakout Rating.

While his rookie year was solid, yet unspectacular, much of that could be attributed to being in a low-ceiling Case Keenum offense, and sharing targets with Emmanuel Sanders. Still, Sutton showed off his ability to make plays downfield, as he did at school, with an impressive 16.8 YPR. 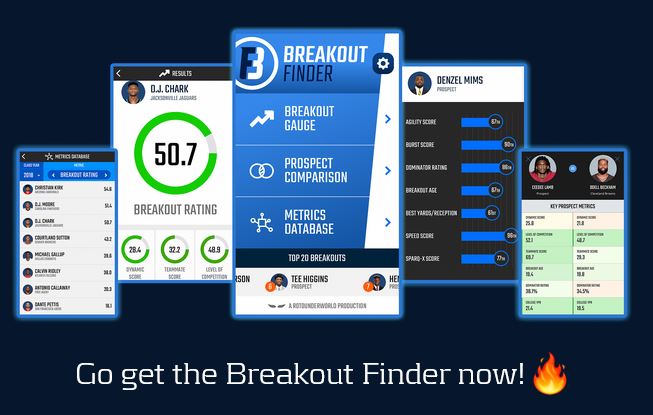 Sutton became the go-to scoring option for Flacco and Lock with 11 Red Zone Receptions (No.9). He also commanded an impressive 1560 Air Yards (No. 10), leading to 2.48 Yards Per Pass Route (No. 12). With Sanders lasting half the season before being traded to San Francisco and rookie [Noah] Fant getting acclimated to the pros, Sutton dwarfed his teammates with a 35.1-percent Dominator Rating (No. 6).

There were many questions this season as to how the receiver hierarchy would shake out with the addition of the two exciting rookies, but all those questions proved to be moot as Sutton suffered an ACL and MCL tear in Week 2, ending his season.

Looking forward, we need to see how Sutton recovers, but he’s still only 25.2-years old. We know he is supremely talented and can demote Patrick back to a depth piece. With Jeudy, Hamler, and even Fant, there may be a concern about volume, but Sutton has shown that he can produce with poor quarterback play, something Jeudy hasn’t done yet, and that he can make the most of his opportunities with a career YPR of 16.1.

Players coming off injury often fall under the radar so this could make for a great chance to get solid production at a reduced price.