In the Red Corner: Quez Watkins; In the Blue Corner: John Hightower 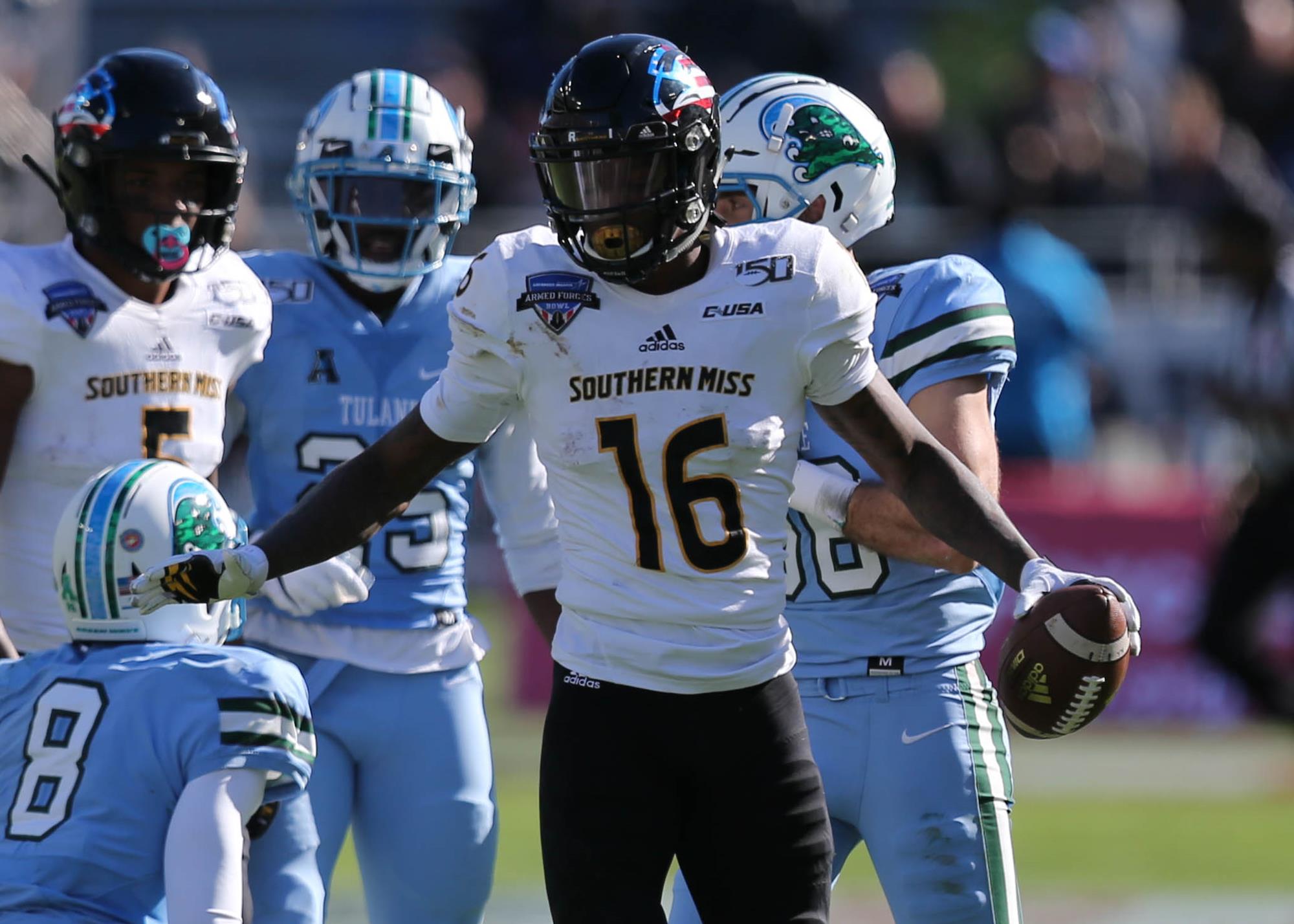 The following contrived dichotomy (scheduled for a one fall?) is to determine which of these two players we should be drafting to our fantasy football dynasty teams, all else being equal. Introducing first, in the Red Corner: hailing from the University of Southern Mississippi, standing 6-0 and weighing in at 185 pounds: Quez Watkins. His opponent, in the Blue Corner: hailing from Boise State University, standing 6-2 and weighing in at 189 pounds: John Hightower.

TALE OF THE TAPE

Whenever a player without a preexisting archetype breaks out in fantasy football, the focus shifts to finding the “next” one of those guys. The trouble with this notion is that most times, this causes us to find ourselves chasing outliers. Darius Slayton was certainly an outlier last year. An unheralded Day 3 pick who seized a sizeable role in a New York Giants offense desperate for a playmaking wide receiver. With a list of Best Comparable Players on PlayerProfiler featuring such luminaries as Denarius Moore, Rico Richardson and Louis Murphy, it’s easy to see why no one saw Slayton coming. That still won’t stop fantasy gamers from trying to catch lightning in a bottle for a second consecutive season.

If there’s any year where we should be encouraged to throw a late-round dart at a potential Day 3, early-career-production outlier at the wide receiver position, it’s a year where the class is as deep as this one. Watkins and Hightower are the two most likely players to fit the mantle of “this year’s” Slayton. The easiest hedge would be to end up leaving your rookie draft/post-draft free agency period with both players on your roster. If you’re drafting against fellow RotoUnderworld and Breakout Finder-types, that may not be possible. If you have to pick between these two, making the right choice will go a long way towards the continued success of your dynasty team.

Watkins began his college career with a bang, dropping four catches and 103 yards on Kentucky, an SEC defense, in his first game. Not too shabby for a three-star recruit and the No. 258 ranked wide receiver in the 2016 high school class, who only received Division I scholarship offers from Central Arkansas (FCS), Georgia Southern and Southern Mississippi. His 337 freshman year yardage total ranks No. 8 among incoming rookies.

Redshirting in his true freshman season helped contribute to his 21.2 Breakout Age, which lands in the 31st-percentile among qualified wide receivers. Not ideal but, as we saw with Slayton last year, certainly not a death knell. Watkins only scored six of his team’s 20 receiving touchdowns in 2019, but his 1.89 receiving yards per team pass attempt ranks No. 10 among this receiver class. Which leads credence to the belief that his 36.8-percent (74th-percentile) College Dominator Rating was influenced moreso by receiving yardage than touchdowns, a more fluky and less stable year-to-year statistic than yards.

Normally, a 4.35 (98th-percentile) 40-yard dash would be something to write home about. Because Henry Ruggs is in this year’s draft class, that achievment feels like an afterthought. It should be a much bigger deal when we consider that Watkins weighed 170-pounds coming out of high school and ran a verified 4.46. Between high school and the NFL Combine, he added 15-pounds and improved his 40-time by over a tenth of a second. My sources tell me that’s not insignificant.

His Speed Score suffers because of his lean build, and his Agility Score is poor (which we’ll talk about shortly), but his Burst Score is slightly above average, which is also beared out in his cumulative career yards per reception numbers. His 32 7/8-inch arms measured the longest of any player at least 6-0 and under 200-pounds which, combined with his speed and build, bumps up his Catch Radius to an above-average level.

Watkins ranked 5th in yards per route run (3.63) in 2019 and dominated special teams. He is undersized, but his speed could increase his draft stock

The dynamism that Watkins displayed in the punt and kick return game speaks to the notion that something was off with the agility testing in Mobile this year. An 11.64 (11th-percentile) Agility Score is bad no matter how you slice it, but his 4.36 20-Yard Shuttle ranked No. 10 of 25 recorded results among wide receivers. Still, this keeps him from entering the bucket of elite speed receiver comps that include John Brown, DeSean Jackson, T.Y. Hilton and Brandin Cooks. Though it’s fair to wonder how much it would’ve mattered for Watkins specifically to put up better numbers in the agility drills. Not even a 4.35 40-yard dash could bring the Conference USA product into the Day 2 conversation. That doesn’t mean that he won’t be a potential steal in the 2020 NFL Draft, provided he goes to the right team.

Hightower didn’t make the football team in his freshman year at Hinds Community College in Mississippi, electing to do track and field. He finished fourth at the 2016 NCJAA National Championships in the 400-meter hurdle. This combined with his 31 catches for 509 yards and seven touchdowns in his stint at Hinds made him a 3-star JUCO recruit in 2018 and got him offers from a number of Division I schools.

He chose Boise State, where he proceeded to toil away in his debut 2018 season, only running 132 total routes. Hightower still drew 47 targets (catching 31), broke 500 receiving yards and scored six touchdowns. Though he has no listed Breakout Age on PlayerProfiler, this is still an impressive accomplishment. He never recorded the aesthetically-pleasing 1,000-yard receiving season, but he still acquitted himself admirably given his circumstances.

With only two years of Division I college production to speak of, Hightower needed and delivered a big showing at the 2020 NFL Scouting Combine to put himself into the Day 3 conversation. Like Watkins, his lean build helped knock down his Speed Score despite running a 4.43 (86th-percentile) 40-yard dash with an impressive 1.49 10-yard split. He recorded a 38.5-inch Vertical Jump and a 122-inch Broad Jump, contributing to his 126.5 (78th-percentile) Burst Score.

Ridiculous concentration from Boise State WR John Hightower. Still have no idea how he managed this one. pic.twitter.com/PaG9ux29FU

In looking for this year’s Slayton, it makes sense to include Hightower in the discussion if only because Slayton is his Best Comparable Player on PlayerProfiler. The rest of his comps, which include players such as Jeff Smith and Robby Anderson are taller, speedier, relatively unproductive deep threats with big Catch Radii, most with later breakouts and some with a decent amount of special teams experience. Hightower paces the group in special teams ability, and will need to thrive in that area in order to last long enough to receive a second contract because he’s not yet a well-rounded player.

With only 66 career slot snaps, he’ll need to succeed as a low-BMI outside receiver. Still, the skills he’s shown us to this point are all translatable at the next level. The climb towards Day 3 draft pick status and subsequent fantasy football relevancy has been a long one, but the light at the end of the proverbial tunnel is coming into focus.

Watkins and Hightower have a lot in common as prospects. They both played at non-Power 5 conference schools, which is why they remain projected Day 3 draft picks despite their impressive long speed. Both wore No. 16 in college. They also have similar Breakout Ratings, with Hightower’s 16.1 score ranking No. 26 in the class compared to Watkins’s 12.0, No. 37 mark. Both of those ranks are fueled mainly by their Dynamic Scores, 17.4 for Watkins and 48.6 for Hightower. With both players recording 0.0 Teammate Scores and negative Level of Competition scores, Hightower’s superior dynamism gives him the edge. They’re very evenly matched but, as in most battles, there must be a winner. Despite having a lower Breakout Rating, I believe that winner is Watkins.

If one of these guys is drafted in the latter part of Day 2, it would make them the clear-cut winner. For now, we’re working under the assumpion that they’re both being selected between Rounds 4 and 7. Though both players rely primarily on their long speed to win, Watkins has shown to be the more well-rounded player of the two at this stage in their development. He also has more experience playing out of the slot, which is a good tiebreaker when dealing with two low-BMI wide receivers.

It’s intersting to note that Hightower not only draws Slayton as his best comp, but that he and Slayton also have some overlapping comp players in Domenik Hixon and Tavarres King. Unfortunately for Hightower, the purpose of this piece isn’t to try and answer the question of who the next Slayton is. It’s trying to answer the question of which player will be a better fantasy football asset for our dynasty teams. For now, the advantage lies with a man named Quez.