In the Red Corner: Tyler Johnson; In the Blue Corner: Bryan Edwards 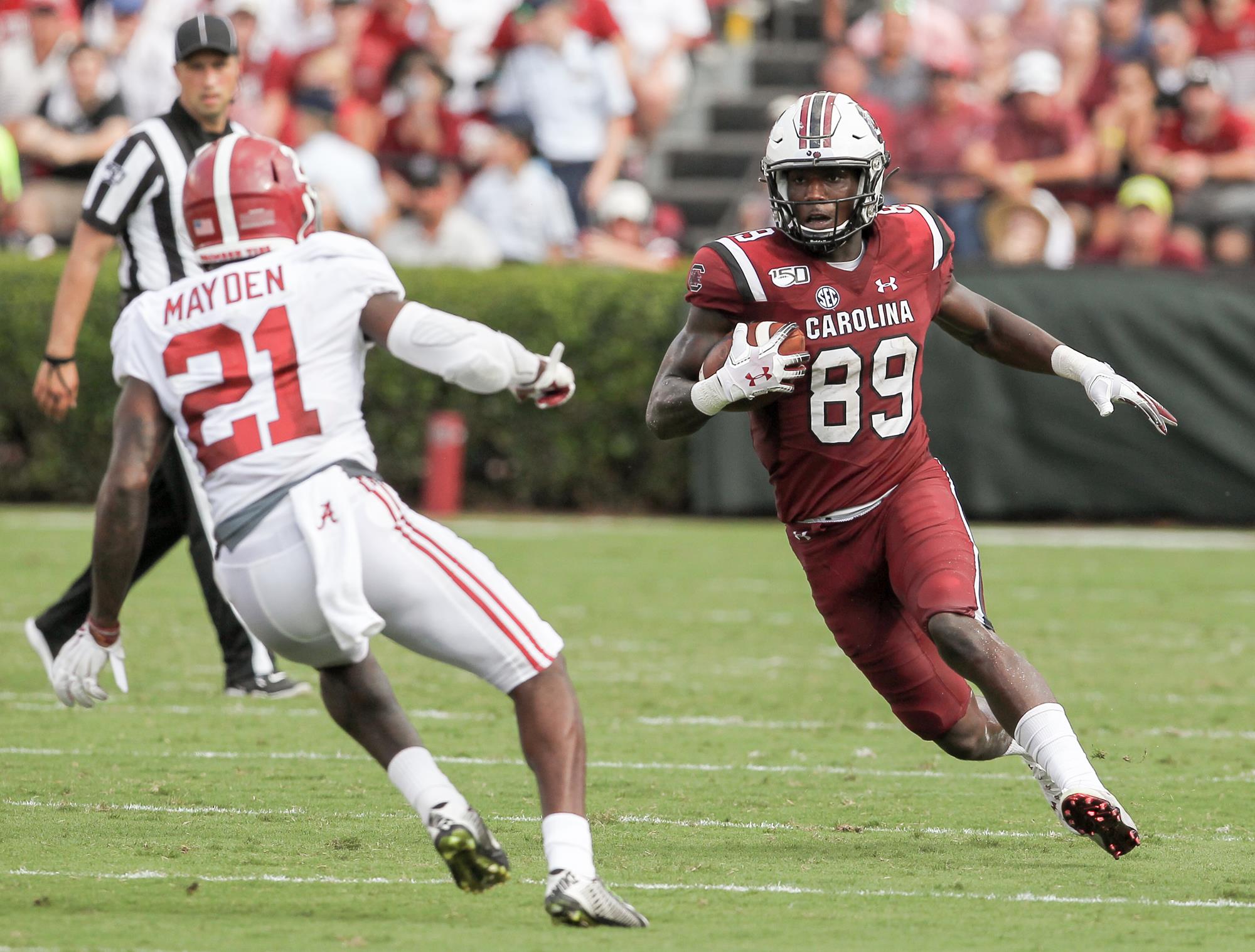 Tale of the Tape

There are an uncanny number of similarities between Johnson and Edwards, two pre-draft favorites among the fantasy football analytics community. A quick glance at their PlayerProfiler pages shows that they’re two of the 25 most commonly-searched players in the database. They have the two highest College Dominator Ratings among incoming rookie wide receivers, and both have elite Breakout Ages.

Despite all the positivity surrounding their profiles, Johnson and Edwards are both commonly being projected as Day 3 selections in the 2020 NFL Draft. Given all of the similarities between these two precocious prospects, it’s not uncommon to see ranking services with them ranked within one or two spots of each other. This should knock them down to the mid-to-late second round of rookie drafts, where fantasy gamers will likely have to make a decision between them. Is there a right decision? That’s what the first edition of this series will attempt to figure out.

Edwards exemplifies why raw statistics don’t tell the whole story of a player’s college production. A knee injury cut short what would’ve been a career-best senior year. As a result, he never reached the aesthetically-pleasing 1,000-yard receiving plateau. The haters usually fail to mention that South Carolina only crested 3,000 passing yards in one of Edwards’ four seasons. Or that the production he did put up still accounted for a 48.4-percent College Dominator Rating (94th-percentile per PlayerProfiler), in the SEC of all conferences. It also helps explain his low College YPR but I digress. What matters more to us is how early Edwards became an impact player. His 17.8 Breakout Age is the second-best in the entire PlayerProfiler database, and he maintained or improved upon his production every year. He was a young senior, meaning that — despite playing four years of college football — he’s still the 11th-youngest wideout in this rookie class.

This kid broke out at age 17. That's it. That's the tweet. Seriously, though, he's dominated production at South Carolina for 4 straight seasons and never fell below 22% of the Gamecocks total receiving production. Talk about consistency. pic.twitter.com/gs6oW0Muac

Part of the reason Edwards is now being projected as a Day 3 pick is that he won’t work out on the field or test athletically before the upcoming draft. Not only did the knee injury he suffered in late 2019 cost him the Senior Bowl, but he also broke his foot in preparation for the NFL Combine. Even if we’re to believe offseason workout reports that he has a 40-inch vertical and runs a sub-4.5 40-yard dash, there were going to be questions about his athleticism. Part of that may stem from his relatively-low cumulative 13.0 yards per reception over four seasons, though he did show dynamism as a punt returner and showed an ability on film to use his speed and ability to win in deep ball situations. If we’re also going to believe the Senior Bowl reports from Edwards himself that he can run a sub-4.47, then we must acknowledge that it would give him an elite Height-Adjusted Speed Score. Even a number in the mid-to-low 4.5’s would likely place Edwards in or above the 70th percentile. What we do know is that Edwards’ physical stature puts him in a bucket of best comparable players that include Corey Davis, Jordan Matthews, Eric Decker, Keenan Allen, and Michael Crabtree, all of whom are big, fast, athletic wide receivers who broke out early in their college careers.

Regardless of his athleticism, Edwards checks every important analytical box as a wide receiver prospect with his elite Breakout Age/Dominator Rating combo and his ability to produce comparably with players who eventually became early-round NFL draft picks. Despite the presence of both Hayden Hurst and Deebo Samuel, he logged 44 catches for 590 receiving yards as a freshman (only CeeDee Lamb had more yards in his freshman season among incoming rookie wideouts with 807) and tied for the team lead with four receiving touchdowns. Edwards never fell below any of those thresholds, averaging a 29.6-percent Dominator Rating over four college seasons. Despite concerns that his draft day stock may take a free fall, it’s rare to see a player break out this early against the most elite competition college football has to offer. Rare as in, unprecedented. It’s easy to see a player falling in love with the intangibles and selecting Edwards in the third round, especially considering Samuel’s rookie-year success after coming from the same school.

Johnson boasts an elite 19.0 Breakout Age (90th-percentile per PlayerProfiler). It’s the highest-ranking breakout age for a sophomore, which means that, like Edwards, he benefits from being a young senior. (Johnson is just over two months older than Edwards and one of the younger receivers in this draft class despite playing four seasons at Minnesota.) While we can blame bad quarterback play for Edwards never recording a 1,000-yard receiving season, it can’t be understated how bad Johnson’s quarterback play was through his first three years. He put up 677 and seven touchdowns in a sophomore year where the Golden Gophers only passed for 1,513 total yards and nine touchdowns. That’s a 44.7-percent receiving yardage market share and a 77-percent touchdown market share.

Johnson continued to improve his counting stats following the arrival of devy-league favorite (and rising stud) Rashod Bateman in 2018. His receptions, receiving yards, yards per receptions, and touchdowns all improved in each year and culminated in a 57.2-percent College Dominator Rating (98th-percentile per PlayerProfiler), a top-20 score among all wide receivers in the database. Johnson is the rare wide receiver prospect with an early Breakout Age and a prolific senior season. He led all wideouts in his class with 4.08 yards per team pass attempt and was the only receiver to account for 40 percent of all his team’s receptions, yards, and touchdowns. In his final collegiate game against an elite Aubrunn defense that shut down Jerry Jeudy (5 catches for 26 yards) and slowed down Justin Jefferson (7-60), Johnson dropped a 12-catch, 204-yard, two-score performance. Additionally, Johnson finished as Pro Football Focus’ top-ranked wide receiver in 2019 after catching an absurd 94.1-percent of his catchable, contested targets over the past two years.

Tyler Johnson tidbit I found while researching for his prospect profile:

He joined D.J. Moore, Hakeem Nicks, and Larry Fitzgerald as the only Power Five conference WRs in @rotounderworld database with 50%+ Dominator and age 19 breakout. Here's hoping a team falls in love. 🙏

The main factors behind Johnson’s projected draft day tumble are his lack of on-field dynamism in college as a pure wide receiver as well as the perception that he’s a non-athlete. Skipping out on the athletic testing at the combine didn’t help his cause. Due to the coronavirus pandemic, it’s looking like Johnson may be unable to test at his March 25 Pro Day as well. It shouldn’t hurt his draft stock, but it probably will. As it relates to his dynamism, Johnson’s one career carry for negative one rushing yard coupled with zero total kick or punt returns is a death knell for his dynamic score. It’s important to note that Johnson did play quarterback in high school, so he can still be considered a dynamic football player in that sense. Especially since he’s only been playing wide receiver for four years and still has room to grow despite how much he improved each year. As it relates to his long speed, Johnson hit a top speed of 20.7 MPH during a game against Buffalo in his sophomore year (per work done by Recruiting Analytics and Dynasty League Football). Play speed matters much more than 40-yard dash time, and Johnson’s play speed was evident in his 17.3 College Yards per Reception mark on PlayerProfiler (82nd percentile).

Both Edwards and Johnson should make great litmus tests for the merits of age-adjusted production versus draft capital. Both are precocious talents who would be Day 2 or Day 3 picks if NFL front offices consistently focused on the right sorts of details. The fact that neither may test athletically before the NFL Draft won’t matter because athletic testing is likely overrated when it comes to these two particular players given what we do know about them. The question remains, is there a right decision when it comes to which one to draft to our dynasty squads if we have to make the choice? The easy answer is that draft capital and landing spot may eventually determine the correct answer to this question, but those who are conducting their rookie drafts before April 23rd need a concrete answer now. Based on all the evidence laid out above, I believe there’s a right answer — and that the right answer is Edwards.

The difference between these two prospects is splitting hairs, and there’s a chance that dynasty gamers who don’t use the same resources as members of the analytics community will be low enough on Johnson to push him into the third round of rookie drafts. That appears to be less likely with Edwards given his elite production in the SEC and his age-17 breakout. His foot and knee injuries may delay his rookie year progress, but remember that in dynasty, we have these players for their entire careers. We already know that Edwards can produce in an unfamiliar situation at a younger age than his peers. While the same can be said for Johnson, the talk surrounding him makes it more likely that he falls to Round 4 or later. In that case, he becomes Stefon Diggs, another college producer who overcame poor athleticism and late-round draft capital to carve out a productive NFL career. That said, Johnson would still have to go to the right team, one that would be serious about giving him a real chance to contribute. Edwards, regardless of where he’s drafted, fits the mold of a player who should become fantasy-relevant, no matter where he ends up.