Bert Whigham would approve of the new Breakout Finder update, where we added running backs to the app in addition to the 2021 WR/RB classes.

Inside Saquon Barkley’s pre-draft training & “freak” abilities. His trainer Bert Whigham trained Khalil Mack, Dak Prescott & sees a Can’t-Miss prospect: “How can you draft Eli Manning’s backup when you have a future Hall of Fame running back right there?” https://t.co/TGcxLWDpKa pic.twitter.com/aJbiCIHUTQ

Saquon Barkley, a prospect that truly had not even a yellow flag on his profile coming out of college, sits atop the historical Breakout Ratings for RBs. To those familiar with college football, it should come as no surprise that the 6-0, 233-pound back out of Penn State is No. 1 on the all-time list. A three-year starter in college, who had over 1,000 yards on the ground each season, brought in 54 passes for 632 yards as a junior, and ran a 4.40 flat in the 40-yard Dash. The 99th percentile SPARQ-x athlete and No. 2 overall pick in the 2018 NFL Draft. Yes, that guy is No. 1 all-time. 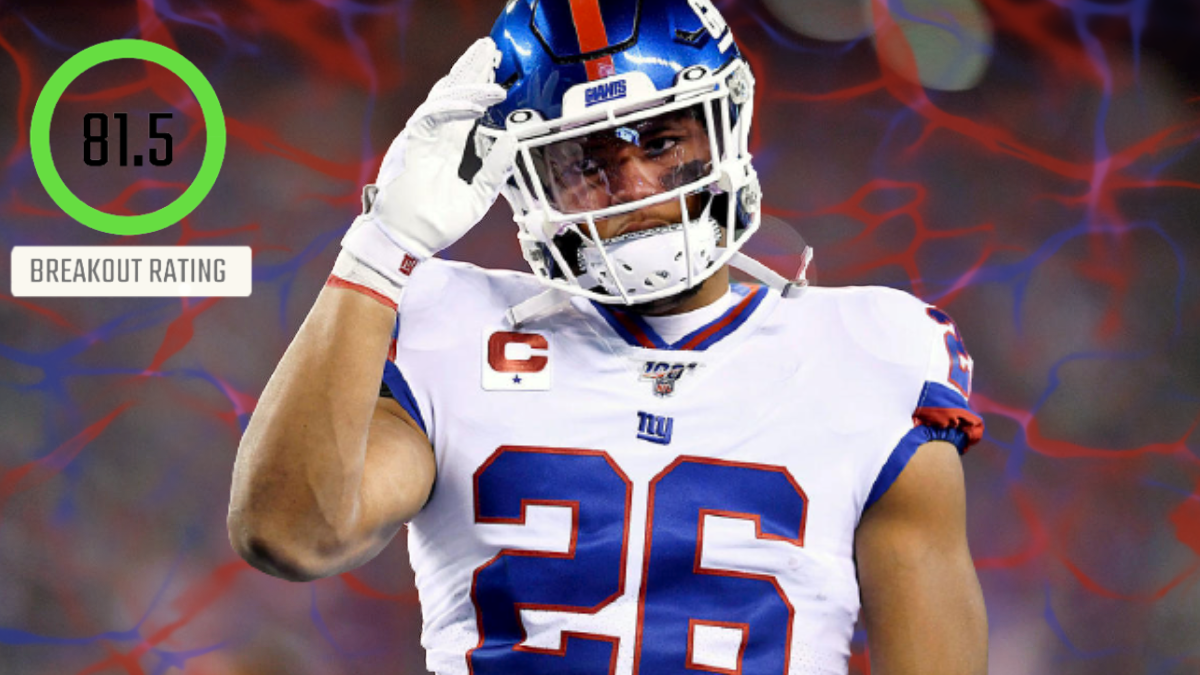 The remainder of this article will include my notes on players I found interesting, surprising, or deserving of slightly more in-depth analysis.

I know you’re wondering about A.J. Dillon and his upper-percentile Breakout Rating.

“But Josh, do you know he can’t catch passes?”

Yes, I’m aware, and hopefully I can help you understand why his place in the 2020 class may be surprising, but not crazy. Players with Round 1 or Round 2 draft capital that also weigh 230-plus pounds generally do just fine in the NFL, even if they are not used much in the passing game. All you need to do is look at a guy like Carlos Hyde, another second-round pick who, at 230-pounds, is still 20 pounds lighter than Dillon. Hyde was a far less impressive prospect than Dillon across the board. He’s slower, took longer to become a starter in college, and was also a non-factor in the college passing game. And even he had two productive fantasy seasons, in 2016 and 2017.

LenDale White. Kevan Barlow. Jeremy Hill. All guys in the “large, yet uninvolved as a college pass-catcher” model, a la Dillon. All three broke out in the NFL. Examining his prospect profile, I’d say Dillon is closer than expected to a Derrick Henry-type.

A.J. Dillon brings massive upside to the Running Back position in Fantasy Football ⚡

Dillon was Boston College’s starting RB in all three of his seasons there, He rushed for 1,589 yards and 14 TDs as a true freshman, facing one of the tougher schedules that season. He’s nearly 250-pounds, with 97th-percentile marks in both Speed Score and Burst Score. Athletic freaks like this succeed in the NFL and in fantasy more often than not. He projects as a TD monster capable of handling 20-plus carries per game, and he averaged over 20 carries per game every season in college. His Breakout Rating reflects the model’s optimism that he can have more fantasy value than the disappointments that were Ron Dayne and T.J. Duckett.

Sticking with that 2020 RB class, Antonio Gibson was a unique challenge for the model. There aren’t many 99th-percentile athletes at the RB position with only 33 total college carries, along with a 700-receiving yards campaign.

Certainly a bet on upside when Washington selected him in the NFL Draft’s third round, my modeling efforts found that pick to be savvy given that he has a slightly higher Breakout Rating than the average third-round pick. The Breakout Finder recognized his potential were he to land in a starting role, and he definitely impressed in Year 1, recording over 1,000 total yards and 11 rushing TDs.

Those who have followed our work at PlayerProfiler and Breakout Finder know our thoughts on Henry Ruggs being the first WR taken in the 2020 NFL Draft. Spoiler alert, it was a huge mistake to pass on CeeDee Lamb, Jerry Jeudy, Justin Jefferson, Tee Higgins, Brandon Aiyuk, etc. in favor of Ruggs.

However, Raiders GM Mike Mayock cannot be let off the hook for his first-round selection the year prior in Josh Jacobs. Not to pile too much onto the Raiders (editors note: but it’s so much fun), but Jacobs just happens to hold the dubious distinction of lowest Breakout Rating among all first-round picks in the database.

Sure, Jacobs broke out in the NFL, and has had back-to-back 1,300-scrimmage yard seasons. However, this does not mean my model got it “wrong,” and I’ll explain.

Jacobs benefits from first-round draft capital, which generally indicates a team’s intent at giving a guy the lions share of the carries. He played alongside NFL-caliber RBs in college such as Damien Harris, Najee Harris, and Bo Scarbrough. He also faced many NFL-caliber defender at Alabama, and he has feature back size at 5-10, 220-pounds.

Josh Jacobs is a screaming sell in dynasty:https://t.co/aJzo6odoLZ

Now for the not-so-good. Because he was nothing more than the 1B to Harris’ 1A in his junior season, Jacobs has a College Dominator Rating that lands in the 15th-percentile among qualified running backs. He was never heavily targeted in any college season. Worst of all, he ran a 4.69 (22nd-percentile) 40-yard Dash. Think of the slowest plodder in the NFL; Benny Snell may immediately come to mind. Believe it or not, the player with a headshot of Gary the Snail on his profile page still managed a 4.66 (28th-percentile) 40-yard Dash, at a slightly heavier weight than Jacobs.

This is the guy the Raiders HAD to have in the first round of the 2019 NFL Draft. And while he’s been fantasy-relevant, he’s done the least with the most if you look at the numbers. In 2020, he averaged over 18 carries per game, yet only 2.2 receptions per game. He was No. 96 among all 2020 RBs in Fantasy Points per Opportunity, and ranked No. 96 in Production Premium. When you’re one of, if not the worst, starting RB across two different fantasy point efficiency metrics, maybe that 4.69 40-time matters after all. Maybe the lack of any impressive college production matters, too. 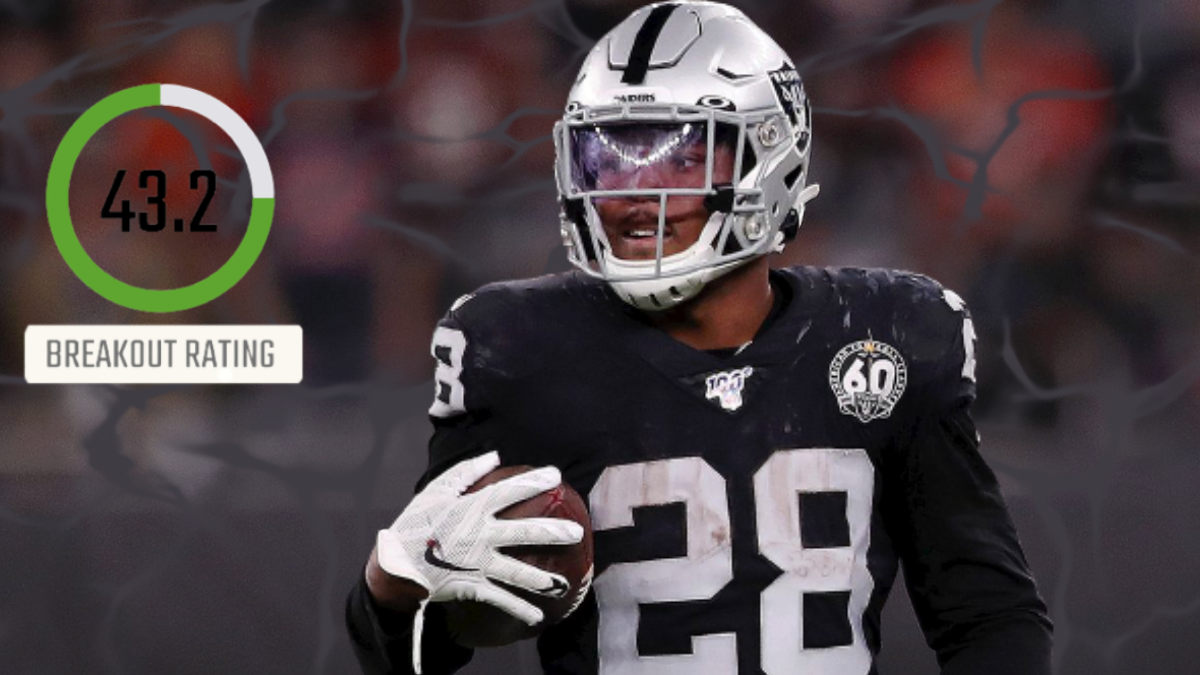 Jacobs may technically be a “miss” by the model since he did break out in the NFL. But I hope you now understand why Mayock selecting him in the first round was ludicrous. His NFL counting stats reflect more poorly on a backwards franchise like the Raiders than on the Breakout Finder model, which is a blaring warning sign for Jacobs enthusiasts in dynasty. Underlying RB talent is important, and while his draft capital has allowed him ample opportunity, he’ll need to re-make his game and improve his efficiency if he wants to continue to be an NFL bellcow.

I’m guessing you have at least one more question you were hoping I’d cover, and I’m assuming it relates to Najee Harris, the massive RB who is a surprisingly good pass-catcher, vs. Travis Etienne, who has an elite combination of production, acceleration/speed, and pass-catching prowess.

For the low to mid-tier RBs, think of their Breakout Rating as a reflection of their ceiling. If you’re grabbing a RB in Round 2 or later of your rookie draft, you’ll be elated if they ever “break out” and turn in a 200-fantasy-point season. However, with a RB like Harris or Etienne, where you’re spending high first-round draft capital on them in your rookie draft, you’ll be disappointed if they turn in a few RB2 finishes during their career. The Breakout Ratings are predicting whether or not a player will hit that 200-fantasy-point threshold. Not whether they will be a league-winner and put up 350 fantasy points.

Etienne is slightly ahead of Harris in the Breakout Ratings, yet Harris is my overall RB1 in this class, currently. Allow me to justify how these can both be true, and why there’s no cognitive dissonance here.

Who is the Top Runningback in 2021 Fantasy Rookie Drafts: Najee Harris or Travis Etienne? pic.twitter.com/ZBQJfdcLtV

Why do I think Etienne finished ahead of Harris? Age. Harris will be 23 on draft day, and there’s very few productive RBs that are 23 on draft day. Also, he didn’t break out in college until his junior year when he was about 21.5 years old. Now, all of this can be explained away by his college teammates (Josh Jacobs, Damien Harris, Jalen Hurts, etc.) and his surprising choice to stay in college one more year. Generally, players that have a junior year like Harris did will just declare for the draft. Because of these factors, Harris is not “quite” the slam dunk that it believes Etienne to be. Etienne has been a star since age 18, and is a year younger than Harris. Personally, I’d rather Harris due to his unique, Steven Jackson-esque size and pass-catching ability.

However, the model isn’t predicting who is most likely to be a high-end RB1 in fantasy, just who will hit 200 fantasy points, or 1,200 yards from scrimmage. And players like Etienne so rarely fail. Mega-producers from an early age who run a 4.40 40-yard Dash and are elite receivers out of the backfield? Yes, it will be incredibly hard for him to fail. At least at his projected weight. We currently have him around the 205-pound range, similar to Christian McCaffrey. Were he to shock us and weigh in at 195 or 198, Harris would most likely usurp him for the RB1 spot in Breakout Finder.

I’d be more than happy with either of these RBs in my rookie draft, and hopefully you can now understand why Etienne has a higher Breakout Rating, yet also understand the rationale behind why I’m scooping up Harris over him come rookie draft time.

There’s too many RBs in the Breakout Finder app to cover them all. But I know I’m going to field some questions on all the players I mentioned, so this article and these notes are my attempt at getting a head start on those questions.

For those wondering, Breakout Finder will be updated post-NFL draft, so these Breakout Ratings for the 2021 class are fluid. This is our job. It’s what we do. 24/7/365. We want to make sure you absolutely crush your rookie drafts in dynasty come April/May. So make sure you’ve got the Breakout Finder downloaded and those 2021 rookies all sync’d up.