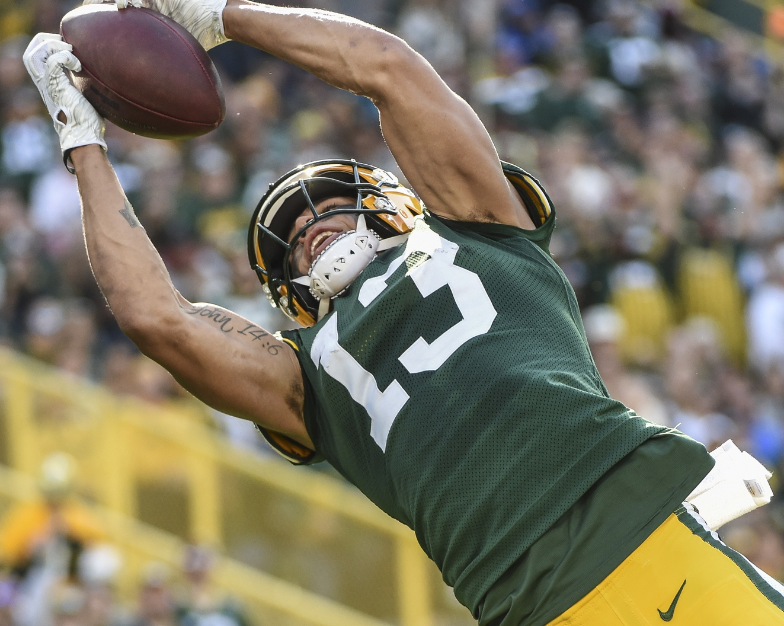 Let’s zoom out for a minute and not look at names. Now let’s say we have a 6’2″ 225-pound wide receiver with an 87th percentile burst score, 74th percentile burst score, 60th percentile college dominator rating, 71st percentile breakout age, and is the unquestioned #2 wide receiver for Aaron Rodgers. Man, that sounds like a guy who could really be a solid fantasy football player that needs to be targeted in upcoming drafts. Believe it or not, gamers can even get this player in rounds 12-15 of fantasy drafts. That player is none other than Allen Lazard.

Lazard is entering his third NFL season. As an undrafted free agent out of Iowa State, it’s not a surprise that it was going to take some time for the Lizard King to breakout, especially playing with Rodgers, who isn’t known for trusting his young players. Davante Adams didn’t reach 1,000 yards until his third season and Jordy Nelson didn’t reach 1,000 yards until his fourth season. Lazard had a few solid games in 2019, going over 100 yards against the New York Giants while going 4-69-1 in week 17. Those flashes — and Lazard’s profile — are strong indicators that he could step into a huge role in 2020.

There isn’t much that needs to be said about being a receiver for Rodgers. His pass attempts were just short of 600 in 2019, one of the highest in his career. Lazard was second in the NFL in target quality rating last season while only playing 61% of snaps. With Geronimo Allison gone and Marques Valdes-Scantling proving last season that he was, at best, a field stretcher, Lazard is locked into the #2 wider receiver chair in Green Bay. Although tight end Jace Sternberger is a popular sleeper option, he is still unproven.

The front office must have faith in him since they didn’t select a single wider receiver in a class where 37 were drafted. Lazards’ snap share was only 61% in in 2019, so if that rises and he is on the field for 80% of the snaps or more, he could explode. Valdes-Scantling, meanwhile, was 108th in catch rate last season and did nearly nothing all season despite being given plnety of opportunities.  Truly, 2020 is set up for Adams and Lazard to not come off the field.

Other than being undrafted, Lazard checks every box for a third-year breakout wide receiver:

What are you waiting for? Go draft the Lizard King and win your league!