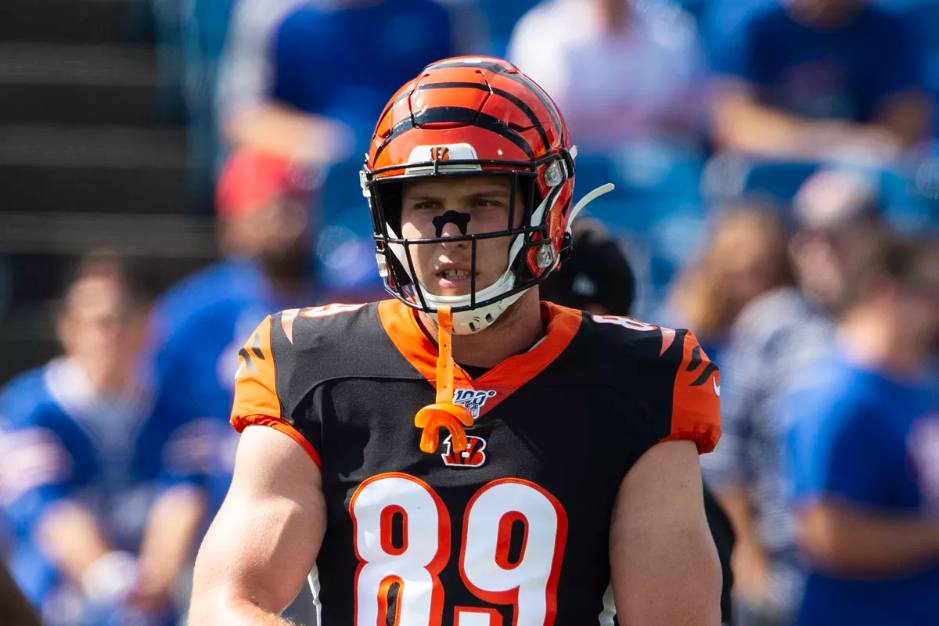 The Cincinnati Bengals are suddenly a team full of value. With Joe Burrow and Head Coach Zac Taylor coming together, a new age has arrived in Cincy. The offense is projected to take a massive step forward this season. Although expectations shouldn’t be too high for a rookie quarterback, there is still plenty of opportunity for fantasy value in 2020 and beyond.

Burrow has quite a list of complementary weapons at his disposal, including 2019 first-round offensive tackle Jonah Williams, wide receivers A.J. Green, Tyler Boyd, Tee Higgins, John Ross, and Auden Tate. Plus stud running back Joe Mixon. So, if everyone in fantasy is projecting big things from the Bengals this season and in the future, it’s simply bad process to ignore the tight end position in this ascending offense. Spoiler alert: this article is strictly going to be Drew Sample-based, although C.J. Uzomah does have value this season as well.

Sample has been a name not many people have discussed in fantasy football. The complete lack of college production is the first knock on him. A 10th-percentile college dominator rating is pretty bad. His best season at Washington was as a senior when he went 25-250-3. However, Sample does have some other interesting points in his profile that suggest he could be a future serviceable tight end.

Looking at Uzomah’s player profile, he has Sample beat in speed score. He also has him beat by 10 pounds. And Uzomah has the veteran advantage right now. But he wasn’t much better as a college producer.

The Taylor regime selected Sample in 2019 using second-round draft capital and have no ties to Uzomah. Clearly they must have plans for him, right? Sample missed nearly half of his rookie year due to a high ankle sprain which also affected his chance of receiving any real playing time as a rookie.

Everything in 2020 is a fresh start for the Bengals. A brand new opportunity for players to earn spots and roles in this suddenly-bright future for Cincinnati. All he has to do is beat out the underwhelming veteranUzomah to become the starting tight end of an ascending offense. Grabbing pieces of this offense right now (before the ascension) is a smart idea. If Burrow can produce in Year One, he could develop a rapport with Sample as a safety blanket option where he can use his agility to make some plays. In addition, if Sample can flash this season and pay off his draft capital, he could be the tight end of the future for Cincinnati and have a long-term connection with Burrow.