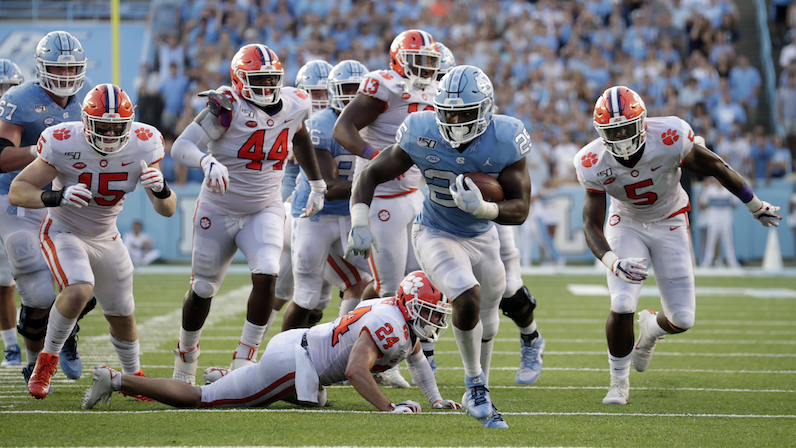 Javonte Williams played running back at North Carolina, splitting the backfield with fellow NFL Draft hopeful Michael Carter and stringing together a solid two-year span of production under Mack Brown. North Carolina ran their backs in a fairly even split of gap and zone blocking schemes, and Williams showed comfort in producing within either system.

Williams picked up some minor injuries throughout his collegiate career but showed good toughness, playing through pain at times for the Tar Heels. He has the speed to outrun defensive backs, and the agility to string together several moves on the same play. His athleticism is understated, but is evident on the field. He may not be a hurdler, but he has a second gear that can catch defenders off guard.

Williams possesses a natural instinct for the position that stands on the field and will translate to the next level. His spatial awareness and ability to stay on his feet in traffic are his defining characteristics as a runner. Williams’ feet stay under him at all times, and when tripped from behind, he has an instant and intuitive reaction to keep the play alive whether it be with his off-hand on the turf or resetting his feet after contact.

He profiles as a north-south runner who has tremendous burst through the line in both zone and gap runs. Serving as the goal line back for North Carolina, he was the focal point for the offense whenever they arrived within the ten-yard line. The coaching staff trusted him to protect the football, and he displayed a nose for the end zone in that area of the field, with the defense selling out to stop him.

His vision is inconsistent, and it can lead him to make the wrong reads on zone runs. On runs where the scheme is blown up by the defense, he is able to minimize losses with his knack for falling forward and picking his way through the junk. He has room to improve when stacked up in a pile, as his legs stop and he loses leverage. His power as a runner suffers from this, and he may not be immediately efficient in short-yardage situations at the next level until this is improved.

Williams is a well-rounded player whow shows good hands in the pass game but is limited in his routes, lending him to be shuttled off the field for more diverse options in obvious passing situations. After the catch, he is able to take advantage of the open field and fully display his athleticism and elusiveness.

Williams is stout in pass protection. He has a good anchor, and delivers the blow to blitzers and defensive linemen alike. He knows where to be, what the protection is, and brings an attitude on those plays. Rarely caught out of position or off-balance, Williams’ ability in the passing game makes him an obvious candidate to be a three-down back at the next level.