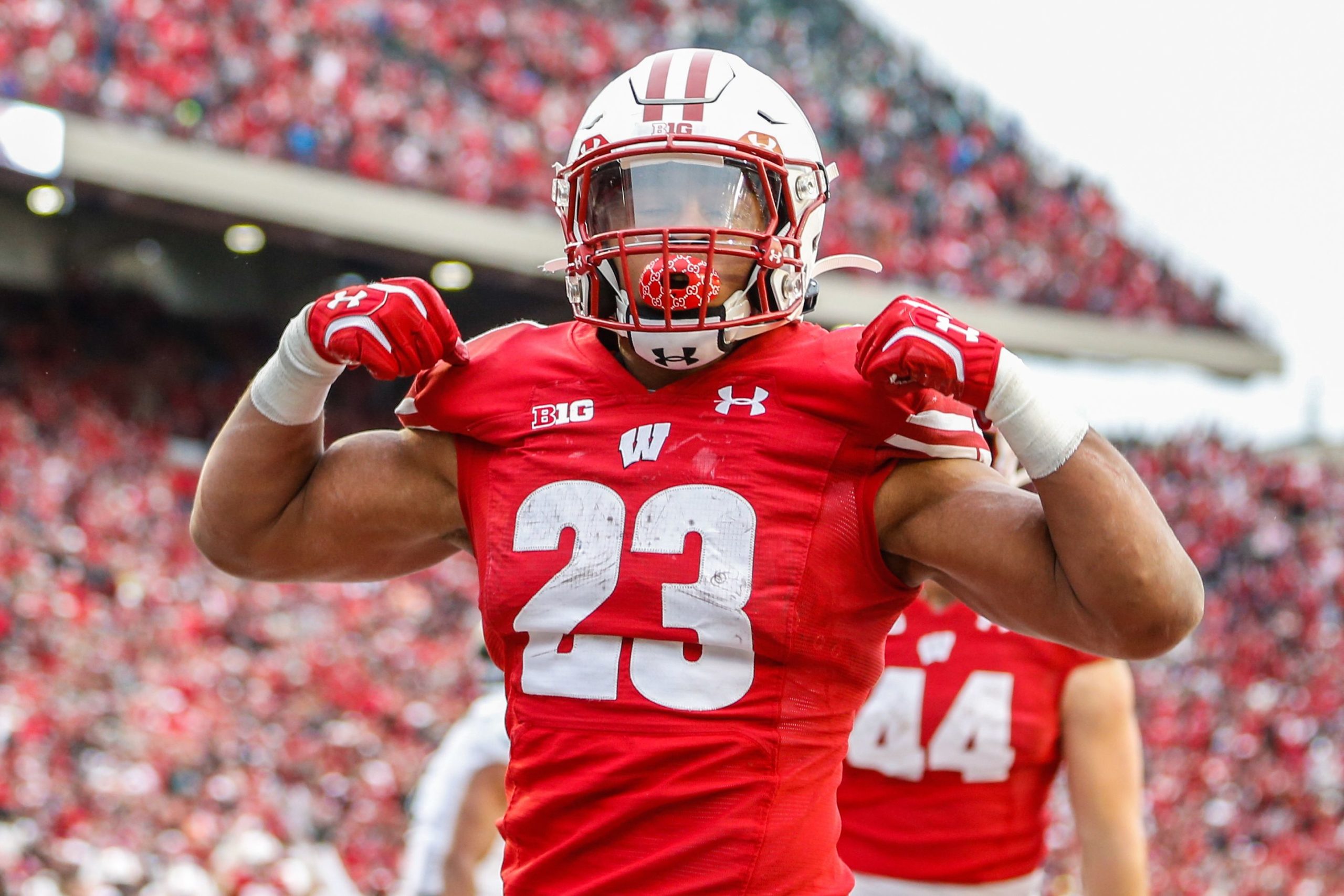 Former Wisconsin Badger Jonathan Taylor was born to be a high-volume, big-play runner in the NFL. His physical dimensions at 5’10”, 226-lbs. put him right there with some of the best bellcow backs in recent memory, as LaDainian Tomlinson, Ezekiel Elliott, Le’Veon Bell, Todd Gurley, Willis McGahee, Nick Chubb, DeMarco Murray, and David Johnson all measured in at between 5’10” and 6’1″ and with 220-230 pounds on their frames.

From an athletic standpoint, Taylor might be even more special. He stands alone with Knile Davis as the only backs since 2007 to run a sub 4.40-second 40-yard dash at greater than 220 pounds. Unlike Davis, Taylor brings additional high-end athletic traits to the table, as his performances in the Combine’s explosiveness and agility drills produced marks that are in the 71st and 66th percentiles, respectively, among all running backs (according to playerprofiler.com). Taylor’s only below-average showing at the Combine was in the bench press, and his composite Athleticism Score of 83.3 (out of 100) is a top-50 mark since 2007. His size, BMI, lower-body explosiveness, and upper-body strength combine to produce a Power Score (a metric that approximates a player’s ability to generate power and projects their capacity for handling a heavy workload) that ranks in the 77th percentile among all runners in my database. 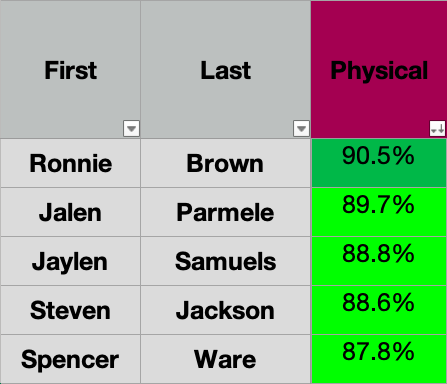 Put simply, Taylor is one of the best running backs in college football history. He broke out as an 18-year old true freshman, rushing for 1,977 yards on a Wisconsin team that went 13-1 and finished 7th in the AP poll. The rest of his career was more of the same, as he produced 41.8% of total Badger offense en route to the 6th spot on the all-time NCAA rushing list (and the only player since Herschel Walker at #17 to post his numbers in only three seasons).

My model’s composite Production Score combines breakout age, dominator rating, and the caliber of the program that a player attended (by using Bill Connelly’s S&P+ rating system) to rate prospects on the overall quality of their college career. Taylor’s mark of 84.1 is the 3rd-highest in my database, behind only Adrian Peterson and Herschel Walker.

The model’s Production comparison identifies players who are similar using the same inputs as the Production Score, and Taylor’s closest matches include a smorgasbord of Hall of Famers and elite fantasy producers:

Easily the weakest aspect of Taylor’s game at this point in his development is his ability as a receiver. He caught only 42 passes in three years at Wisconsin, displaying decent per-reception efficiency but below-average per target and catch rate marks.

What’s encouraging is that Taylor showed a lot of growth in this area in his final season. After posting sub-5.0% target shares in each of his freshman and sophomore campaigns to go along with Satellite Scores¹ that sit in Jordan Howard and Ronald Jones territory below the 8th percentile, Taylor vastly increased his involvement in the passing game, earning a 75th-percentile share of Badger targets and posting a Satellite Score that, while still below average, puts him in the range of guys like Carlos Hyde, Jamaal Charles, Jonathan Stewart, LeSean McCoy, and Tevin Coleman as far projecting how much a part of Taylor’s game pass-catching might be at the next level.

¹Satellite Score is a metric I devised that adjusts a player’s involvement in the passing game (using target share) for his overall contributions to his team’s offense (using dominator rating) to provide greater context to his production and project how much of his role in the NFL will be made up of catching passes. It is more predictive of targets as a percentage of total opportunities (carries + targets) in the NFL than target share is. Essentially, Satellite Score quantifies the difference between Jay Ajayi and James White’s near identical target share marks, telling you that White is much more of a pure satellite back than Ajayi is.

Taylor is still behind many of his peers as a pass-catcher, but his composite score of 53.2 in my model’s Receiving Chops category indicates that this area of his game isn’t necessarily a weakness for him. It likely will never be a great strength of his, but I think it’s reasonable to expect that Taylor is immediately a viable option on screens and dump-offs, with potential for higher volume and more nuanced work in the coming years, similar to the way the development of Ezekiel Elliott or Leonard Fournette has recently gone.

Taylor’s closest pass-catcher comps according to my model are nothing to write home about, but serviceable-to-good receivers like Fournette, Eddie Lacy, Ray Rice, and Aaron Jones do make appearances a bit further down in the lower 80%-range of this list: 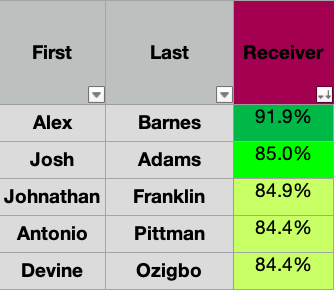 I touched on Taylor’s excellent efficiency numbers in this piece on the 2020 class, but it’s certainly also worth examining them against the entire population of backs in my database.

While Taylor benefited from a fantastic offensive line (using Football Outsiders’ offensive line play data, they are the 5th-best group among those that backs from the last two draft classes played with), he outperformed the output of other backs on the roster (ableit not an especially talented group according to their weighted recruit-star rating average) by over a yard-and-a-half per carry and a ridiculous 8.08% in rate of 10+ yard runs. That Chunk Rate mark ranks in the 94th-percentile among all backs in my database, and only Duke Johnson, Jordan Howard, Royce Freeman, Giovani Bernard, and Todd Gurley are guys who saw similarly-heavy volume at a Power 5 school while also outpacing their teammates in Chunk Rate by at least 5.00%.

Taylor, with his 4.39 speed, profiles as a deadly breakaway threat at the next level, but he shockingly converted a low percentage of his 10+ yard runs into 20+ yard runs while in college. I’m pretty willing to chalk that up as an anomaly and something I’d expect will be corrected in the NFL, but if there is any small chink in Taylor’s armor, that’s a data point to keep in the back of your mind. 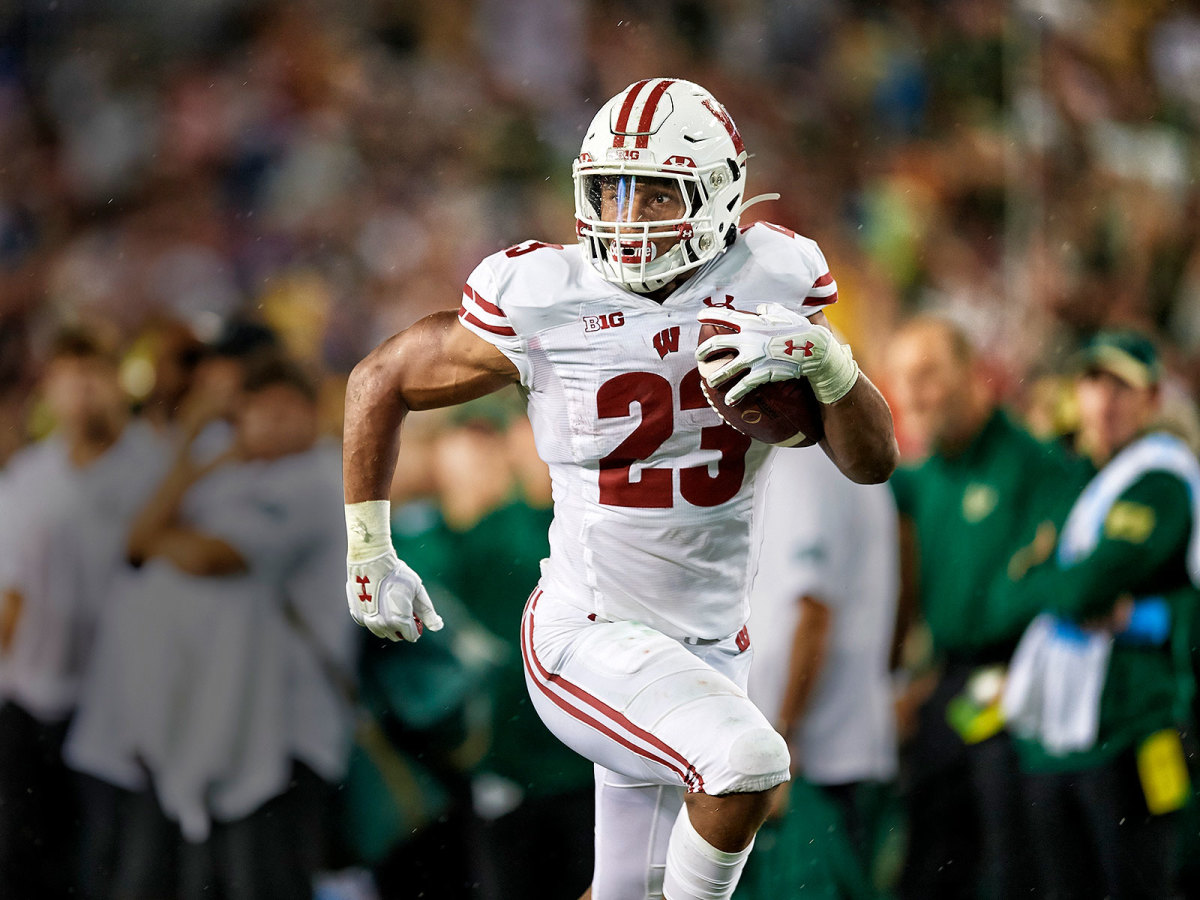 Taylor’s True YPC (which limits all runs to a maximum of 10 yards) and Loss Rate numbers each rank in at least the 94th percentile. The offensive line helped, but there are guys with similarly dominant line groups who weren’t creating positive yardage at the incredible rate that Taylor was (Josh Jacobs, Damien Harris, and Rodney Anderson from the 2019 class are good examples). The dude is simply a machine.

There are some interesting names (un-toast Sony Michel and Chris Carson-with-long-speed are pretty enviable prototypes — also, uhhh, Herschel Walker?) among Taylor’s closest comps as a pure runner (a comparison that takes a player’s physical and athletic profile into account along with his rushing efficiency numbers), but it’s the relative weakness of the matches here that is most interesting to me. Taylor is a special, uniquely talented runner: 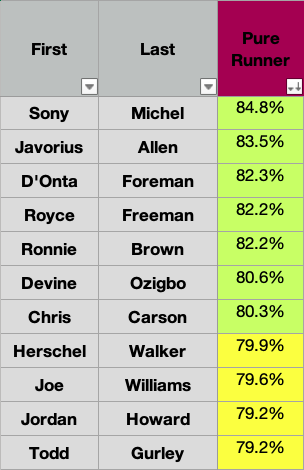 Taylor’s overall Prospect Score (which gives various weights to all of the previously discussed inputs in order to create a composite rating) of 78.7 is higher than the scores of all but three running back prospects going back to 2007: Christian McCaffrey, Saquon Barkley, and Todd Gurley (yes, that means my model rates Taylor higher than Adrian Peterson. Taylor was more efficient and showed more as a receiver, so sue me).

For other prospects, this is the part of the breakdown where I would dive into their strengths and weaknesses and their potential NFL role and where I would envision them landing in rookie drafts depending on draft capital and blah blah blah, but Taylor is an incredibly straightforward evaluation: he is a tremendous prospect in the mold of pure runners like Adrian Peterson, Nick Chubb, Todd Gurley, Eric Dickerson, and Herschel Walker and, based on talent, he is the easy 1.01 in dynasty rookie drafts. Landing spot has the potential to shake things up a bit (D’Andre Swift, Cam Akers, or JK Dobbins could jump Taylor if they end up in, say, Kansas City, and Taylor ends up somewhere like Miami or Washington), but I have absolutely no questions about Taylor’s ability to produce RB1 numbers in nearly any situation he could land. He will immediately be one of the best running backs in the NFL as a rookie.

The final two groups of comps illuminate both the type and caliber of player we should expect Taylor to be in the NFL. For the Raw Traits comparison, we remove production from the equation and look purely at guys who resemble Taylor from an on-field runner-receiver perspective. As with the Pure Runner comparison, the weakness of the comps here reveals the uniqueness of Taylor’s profile. With the overall Similarity Score comparison, we match guys to Taylor based on all of our inputs to identify those who exist closest to the overlap of the similar play-style/similar talent level Venn Diagram: 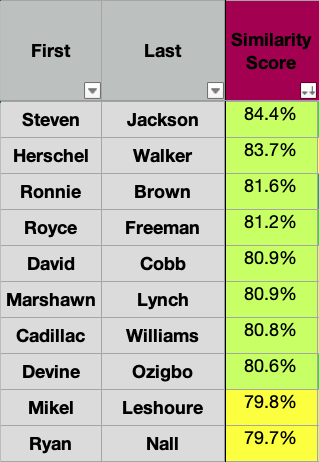 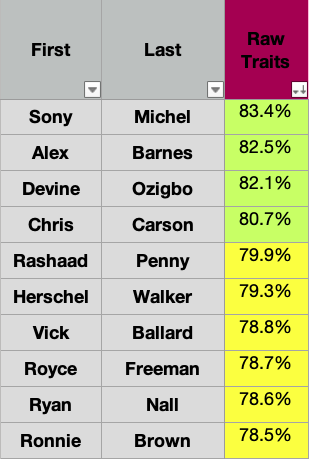