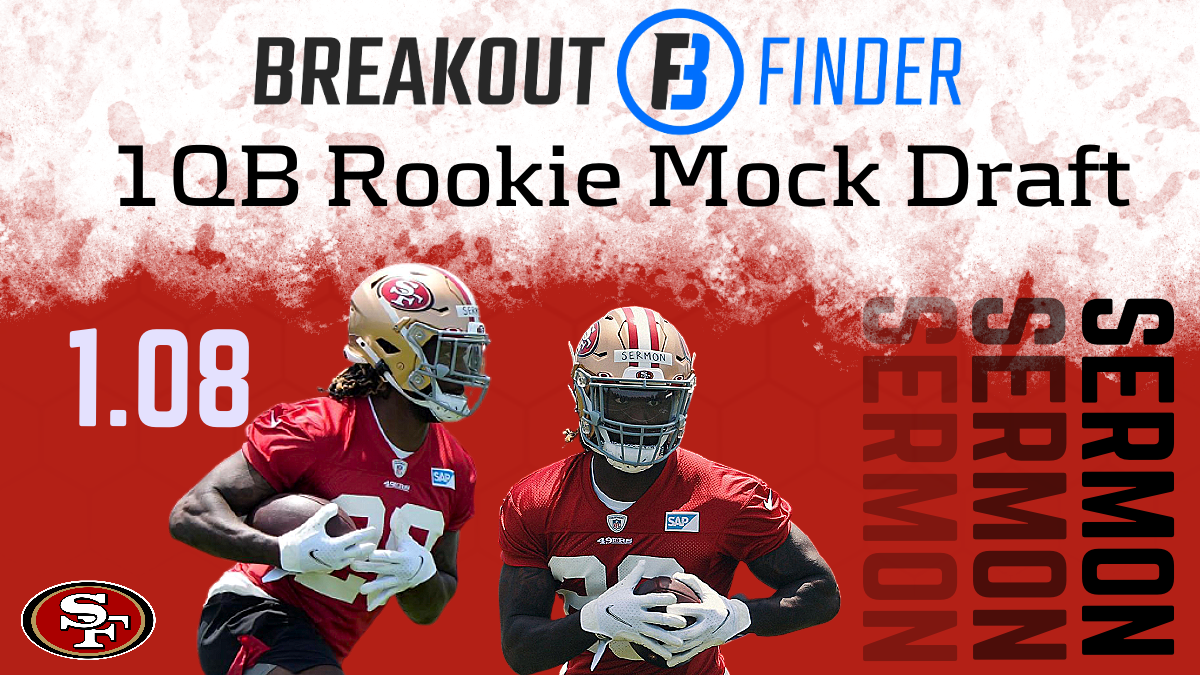 The RotoUnderworld community will be partaking in a series of 12-team, five-round rookie mock drafts, running through the summer. The mock drafters will be comprised of writers and analysts from both PlayerProfiler and The Breakout Finder, as well as our friends in the Patreon community. While these pieces will include quick-hitting notes from the drafters about why they made their selection, our writers will take turns recapping the festivities and adding their own unique perspectives.

Oh, hello. It’s been a while since I’ve stepped into this side of the Underworld Enterprises pond. Smells a bit like Lemon Pledge. but I’ll manage.

As the introduction states, it is, has been, and will continue to be ROOKIE DRAFT SZN around these parts. And while we aren’t running these mocks every other week anymore, we DO plan on conducting them throughout the summer. And then once the regular season starts, we plan on running in-season rookie mocks for the 2022 season to keep the party going. This is SUPER TOP SECRET BREAKING NEWS that I’m sharing with all of you, and I hope you appreciate it.

As I attempt to control THE VOLUME OF MY PROVERBIAL VOICE, I bring you the draft board of our most recnt foray into the single QB rookie draft waters. This draft featured such Underworld friends as THE ROOSTER, Frank Lakatos, Matt Babich, Ed DeLauter, and THE SALARY CAP-TAIN. And by that I mean these are the only other drafters whose Twitter handles I know.

Right off the bat, you’ll see that Ja’Marr Chase notcieably went at the 1.01. Not unprecedented, but notable nonetheless. More notable was Terrace Marshall being picked at 1.07, higher than his max draft slot per the ADP rookie draft data tracked by PlayerProfiler. He already had a favorable Breakout Rating, and despite a 0.0 Dynamic Score, his rating surpassed Rashod Bateman’s post-NFL Draft.

Most of the rest of the first round was consistent with both our ADP trends and our rookie rankings. Frank selected Jaylen Waddle near the back of his ADP range, and I selected Rondale Moore near the top of his. With second round draft capital, the No. 1 Breakout Age in this rookie wide receiver class, and being tied with five other players for the 11th-highest score in the entire PlayerProfiler database, it’s no wonder only Chase has a higher Breakout Rating among rookies. I only regret not showing up to the Underworld Day 2 draft party until almost immediately after the moment Moore was picked by the Cardinals (and there was much rejoicing).

It’s always interesting to see where the top tier options in a given draft class are valued in a single QB format. Trevor Lawrence usually lands in the middle of the first round, while Trey Lance and Justin Fields have worked their way into 1/2 turn consideration. PlayerProfiler’s rookie rankings all peg them as second-round values in 12-team formats, but QB-needy dynasty squads that are deep at other positions can justify taking them in the first. It’s all about context and league make-up.

Also, considering how he’s been shredding the offseason to this point, I’m starting to think that Elijah Moore (and his third-best-in-class Breakout Rating) at 2.02, or in the second round in general, will soon be a thing of the past. So let me enjoy this small victory whilst I can.

Is Elijah Moore a darkhorse to lead all Rookies in receiving? 👀 pic.twitter.com/2GhcsPKIAv

The two players picked highest above their rankings in this round were Zach Wilson and Chuba Hubbard, though both typically go in the mid-to-late second. Wilson is usually picked before Mac Jones, and Hubbard before Elijah Mitchell, though our ranks suggest that should be reversed on both counts. Amari Rodgers and Amon-Ra St. Brown going in the later portion of the second frame represented the round’s biggest value selections per the biased opinions of our particular enterprise.

The player picked closest to the top of his general range was Nico Collins, the WR9 off the board at the 2.06 slot. On the negative side of the ledger, he has a 0.0 Dynamic Score, fails to his the 20.0 Breakout Rating threshold we look for as a baseline, and Josh Gordon is the only one of his Best Comparable Players who is objectively good. On the plus side, he has an alpha build, Day 2 draft capital, and goes to a team with a DeAndre Hopkins-sized hole to fill next to Brandin Cooks in the receiving core. Yeah I know Will Fuller was there more recently, but both Nuk and Nico have 30-pounds on him (on a side note, Nuk and Nico sounds like the next great Nickelodeon sitcom waiting to be written).

Another player taken near the top of his general range was Tutu Atwell with the first pick of this third round. Despite his infinitesimal size, his Breakout Rating lands just outside the top 10 receivers in this class, thanks in part to being one of only seven with a 50.0-plus Dynamic Score. Brevin Jordan and Dez Fitzpatrick being selected in the mid-third can also be pegged as surprising given how we value them. Fitzpatrick being taken at WR16 and before a host of available receivers can be explained away by this draft taking place before Julio Jones arrived in Tennessee. And while those who have yet to be woke may wonder why Gerrid Doaks went this early, the real ones know. Frank is a real one, and he also knows Doaks was certainly not making it back to him with the final pick.

Gerrid Doaks has the #1 Athleticism Score among RBs in the 2021 Class 👏 pic.twitter.com/K1e1cLOAb7

I’m not a Rhamondre Stevenson guy by any means, but he was a five-star recruit, has a top 10 Breakout Rating among the RBs in this class, and is a competent enough receiver at 5-11 and 231-pounds that Sony Michel‘s role and/or roster spot are in real jeopardy. Miami may have a more ambiguous backfield, but Stevenson getting actual draft capital made him the pick over Doaks for me.

Rhamondre Stevenson entered the Top 10 of the https://t.co/JtvRe0ThgZ Dynasty Rankings after going to New England in Round 4🚨

Pat Freiermuth fell a small bit further than we’re accustomed to seeing, and Rooster stopped the fall to pair him with Kyle Pitts. Other fallers based on rank and/or ADP were Mac Jones (both), Kenny Gainwell (ADP), and Anthony Schwartz (rank). News around Schwartz in particular has been quiet to this point in the offseason, but that will make the 20-year old Underworld favorite that much more attainable. Get in before he breaks the kind of play with his 99th-percentile speed that makes you stop and wonder why you weren’t higher on him this whole time.

Whenever drafting with various friends of Underworld Enterprises, it’s tough to find a whole lot of surprise in these later stanzas, though those on the outside looking in (aka: the unwashed masses, or the un-woke if I choose to not be an asshole about it) would likely beg to differ. These are the rounds to call your proverbial shots in. The safe space where you can take a player well above his ADP and know that no one will give a shit unless you took the guy they were eyeing up. The spots where we need to be drafting Simi Fehoko and raising his ADP. Who cares if we have Seth Williams pegged as a late-fifth round value in this format? Take him at WR21 in the mid-fourth.

As for me, I’ll take what I perceive to be a relative value with underdiscussed upside in Tylan Wallace at 4.02 and WR18. I’ve said it before (on Twitter) and I will say it again, maybe even another time before it’s all said and done, but I don’t hate Mario Manningham being his Best Comparable Player. Although Manningham’s Breakout Rating is more than four times greater than Wallace’s, and I’m a biased Giants fan, but who’s counting?

One player that stood out in this round for being picked near the back of his general range is Khalil Herbert. Despite being a generally unexciting prospect in a now-crowded Bears backfield, there’s a school of thought that a player with bottom-tier burst and limited pass-catching experience on his college resume can become a consistent receiving threat. While stranger things have happened, that’s not the kind of upside bet I’m looking to make regardless of how far past his ADP he falls. I’m more a fan of the selections of Larry Rountree and Kylin Hill at a big discount compared to where we have them ranked.

A few intriguing players with high enough ADPs that it was noticeable to not see them drafted were Cade Johnson, Jaret Patterson, Demetric Felton, and Dazz Newsome. Though our rankings suggest we’re not missing out. The players we have ranked in our top 60 that were not among the ranks of the drafted in this exercise are Frank Darby, Davis Mills, Racey McMath, and Mike Strachan. In their places were Sage Surratt, Jonathan Adams, Tamorrion Terry (remember that guy?), and Jacob Harris. The only tight end among any of the names mentioned in this section, Harris has become the most intiguing dart throw based on his freakish athleticism, being a converted wide receiver, and the buzz he’s already generated this offseason.

“Harris has become a “special project” player for both tight ends coach Wes Phillips — with whom Harris is constantly in orbit receiving instruction — and head coach Sean McVay, who has taken extra time with the rookie during drills on more than one occasion. “ https://t.co/ZsqbdR4nBW

Well this was a fun little time. Between Rooster’s bold-strategy-cotton-let’s-see-if-it-pays-off gameplan of drafting THREE tight ends in a non-TE premium format, a 3WR start from the 1.01, and Jared Smith channeling his inner Kliff Kingsbury and deploying four wide receivers, there’s no shortage of discussion points we can take away from this exercise.

Now if we can just get rid of this Lemon Pledge smell, I can be convinced to come back here more often.