How To Win #SFBX Through A Fish Bowl Lense 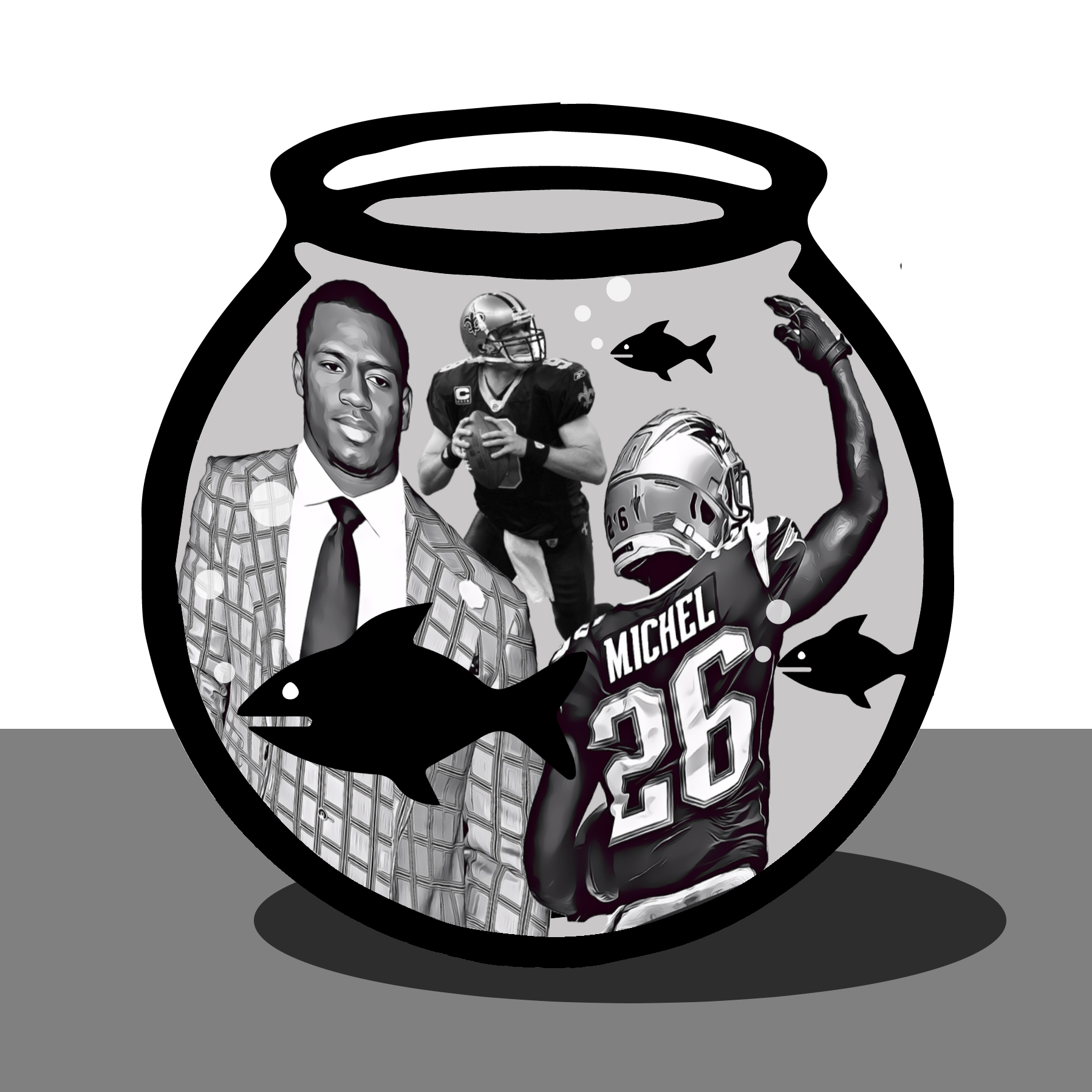 What is the Scott Fish Bowl and How Can You Help Me Win It?

The Scott Fish Bowl (SFB) is one of the pinnacle events in fantasy football. There are many facets to the SFB that make it one of the most popular leagues among fans and analysts:

Needless to say, the SFBX is THE TOURNAMENT and FANTASY FOOTBALL event of the year!!

SFBX has a scoring system that benefits quarterback efficiency, first down bonuses, and is TE premium; making strategy for  this anticipated tournament paramount. Add in the fact that you are competing against 1339 other teams, it is imperative that you zig when others are zagging, in order to be different and not similar to other teams. Looking for outliers and potential breakout players that benefit from this unique scoring is your key to SFBX success.

I am  going to help you zig by analyzing  three players that can help you win this year’s SFBX. They are players that will pay dividends at their respective ADPs, and, if looking at them through a PPR, half PPR or standard scoring format, may go overlooked in your SFBX pre-draft process. What I will look at is how these players performed in 2019 with the SFBX scoring system , and perform an analysis of why this production will carry over to the 2020 season and ultimately lead you to fantasy success in SFBX.

Let’s face it, this isn’t sexy.

Sony Michel was a player that potentially burnt you in 2019 thinking that Michel was a more talented LeGarrett Blount. The Pats’ were 9th in rushing attempts in 2019, just a tick behind their 2018 run heavy attack (28.11 run plays/game) that had them 3rd in the NFL. So, why didn’t this translate for fantasy success for Michel in 2019? Michel was an absolute zero in the passing game.

Michel had a total of 20 targets, yes, that’s right, 20 targets for the entire season. James White’s role is clearly defined in New England and that meant that Michel was on the field for only 38.2% of snaps. Teams knew that the Patriots were running the ball when Michel was on the field. In most fantasy scoring systems in 2019 then, Michel was nearly entirely TD and game script dependent to be fantasy relevant. 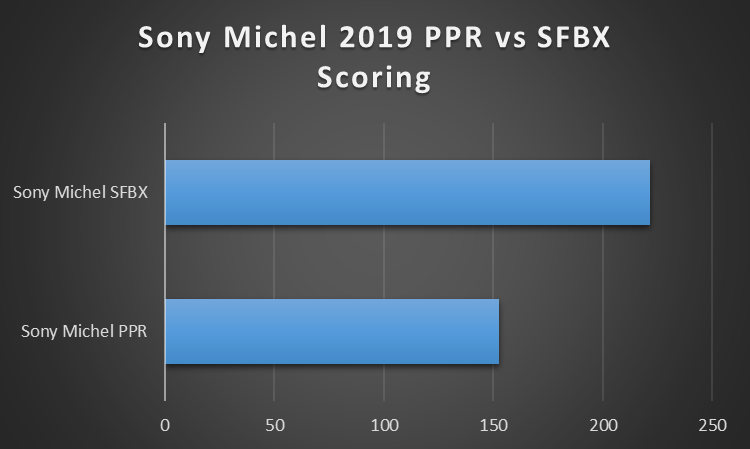 So how is Sony Michel going to help you win SFBX?

Because he dominates on the ground. Only seeing a 38.2% snap share in 2019, Michel still ranked 9th in carries with 15.4 p/g. For those that see his YPC might shutter, but, in a tournament that rewards RB’s pounding on the ground, efficiency to a certain degree can be thrown out the window. The testament to this is the variance in Michel’s 2019 PPR scoring vs the SFBX scoring. Michel jumps an incredible 51 spots and grinds out an additional 69 points by applying SFBX scoring to his 2019 numbers. The reason? An incredible amount of volume (#9 in carries), #9 in rushing first downs, and an innate ability to hold onto the ball (only 2 fumbles in 2019) vaults Michel up in running back relevancy under SFBX scoring.

This role only looks to expand in 2020 if fully healthy and having newly acquired Cam Newton under centre. With defenses having to adjust to focus on the former league MVP Cam Newton, it should enable Michel to see lighter fronts than what he faced in 2019, potentially opening the way to more efficient runs and bigger chunk plays. Michel is currently being drafted in the 9th round and projects to be a Top 20 back under SFBX scoring. Taking Michel this late will allow you to adopt a modified zero RB approach and dedicate precious draft capital to earlier round TEs and hyper efficient quarterbacks, such as my next SFBX winner, Drew Brees.

SFBX and Drew Brees Were Meant To Be 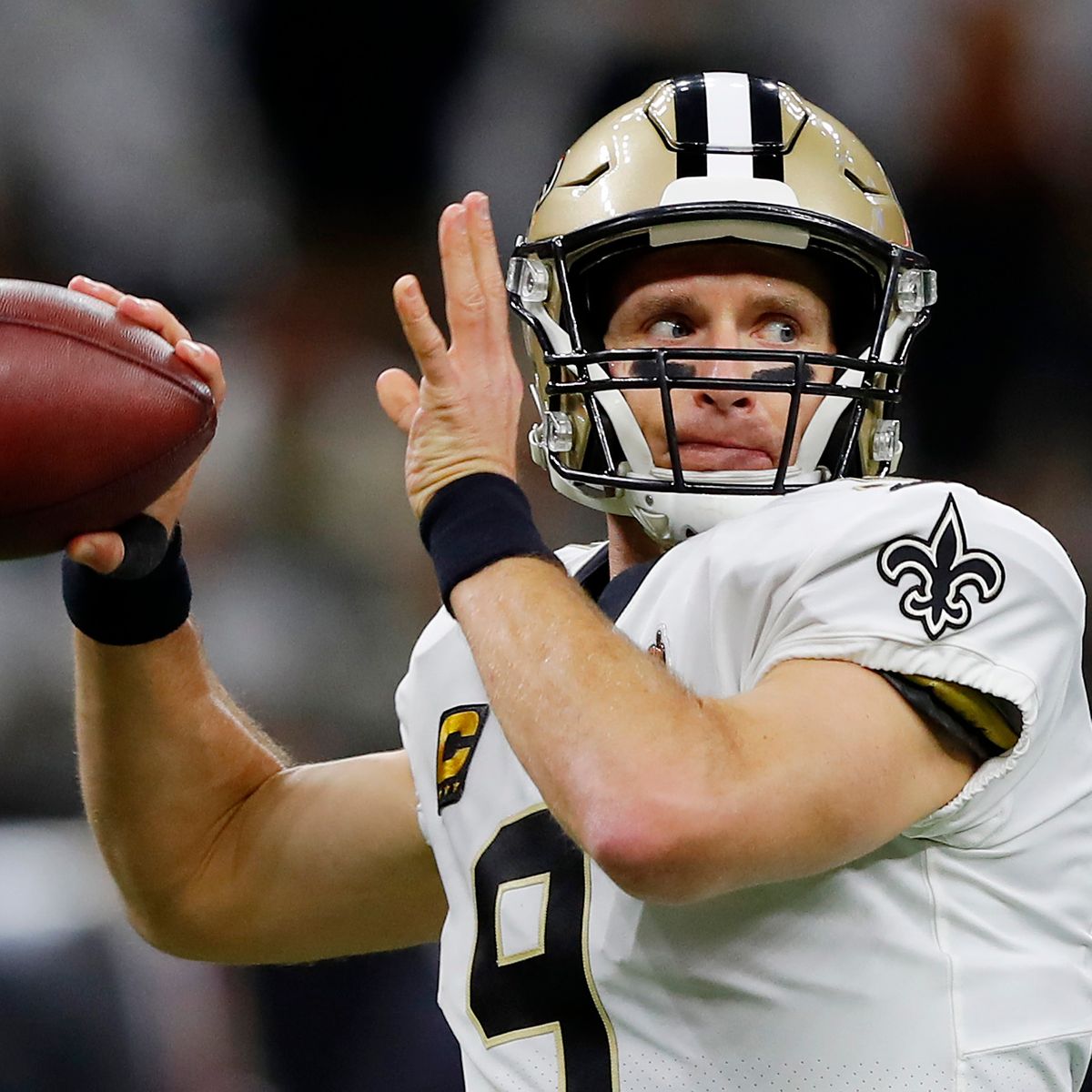 In a scoring format that benefits highly efficient and largely risk averse QBs with a bevvy of reliable pass catching options, no one ranks better than Drew Brees.

Brees is steady as they come in terms of completion percentage. Here are his numbers over the last three years: 2017= 72%, 2018=74.4%, 2019=74.3%. With an offensive line that was 8th in protection rate in 2020, and added the top center available in the draft in Cesar Ruiz, the time that Brees requires to be hyper efficient should continue. The supporting skilled position players around Brees continue with Michael Thomas and Alvin Kamara, both who excel in Sean Payton’s system. A second season working with Jared Cook also bodes well for Brees continued fantasy relevance, and, near dominance in the SFBX scoring format.

How Drew Brees Will Help You Win SFBX

Let’s talk about that dominance and how the SFBX scoring format benefits Brees:

The Saints threw at around the middle of the pack in terms of attempts, but it’s Brees efficiency and protection that you are banking on for SFBX. In the 11 games he played, Brees threw 27 TDs and was only picked off an incredible 4 times. Brees innate ability in the pocket to escape trouble by checking down to a trio of impressive pass catchers in Kamara, Thomas, and Cook should continue in 2020.

Brees, through 11 games in PPR scoring for 2019, ended the season as QB21. What happens when you apply SFBX scoring to the same season? He becomes QB6, and, in terms of PPG, Brees becomes QB2, putting up 28.11 pts per game. Since Lamar Jackson is in a tier of his own (35.37 pts/game), Brees too deserves his own tier in SFBX. With a 4 point per game gap to the next QB (Deshaun Watson), why aren’t mock drafters recognizing the Bowl winning potential of Drew Brees?

As Brees returns healthy under center with an improved offensive line, a bevvy of talented pass catchers at his disposal, and something to prove for a whole host of reasons, Drew should be in consideration as your QB1 for a chance to win it all. 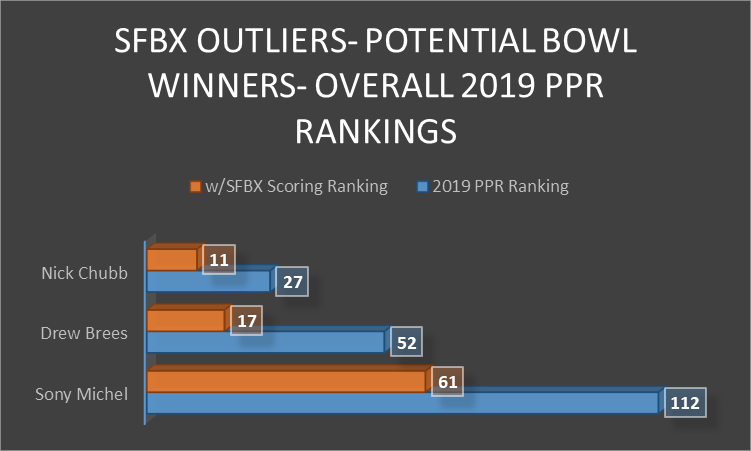 I’ve given you two players that should be on every one of your SFBX rosters. One is a RB2 in Sony Michel that is being drafted like an afterthought, the other, Drew Brees, is drafted like a low end starter instead of the SFBX winner that he could potentially be. So, where does Nick Chubb fit in?

Now, before you get your Kareem Hunt knickers in a bunch, let’s lay out what we know. Nick Chubb is a home run hitter who is nearly impossible to defend against in space. His yard per carry (YPC) ranked 11th in 2019 with what might have been the quietest 1494 rushing yard season in the history of the game. He has been PFF’s top rated rusher for two straight years, now holding a 91.3 rushing grade. Yet, fantasy footballers are fading Chubb to the 2nd round.

Are we really that afraid of Hunt eating into Chubb’s workload? Chubb isn’t currently being drafted in mocks like the RB1 and top scoring threat in this format that he can be. At an 18.5 ADP, Chubb is being drafted LOWER than he was in redraft in 2019 after a nearly 1500 yard season and in a scoring format that benefits his style of play. Is the Hunt for Kareem October really that imminent?

good things happen when chubb has the ball 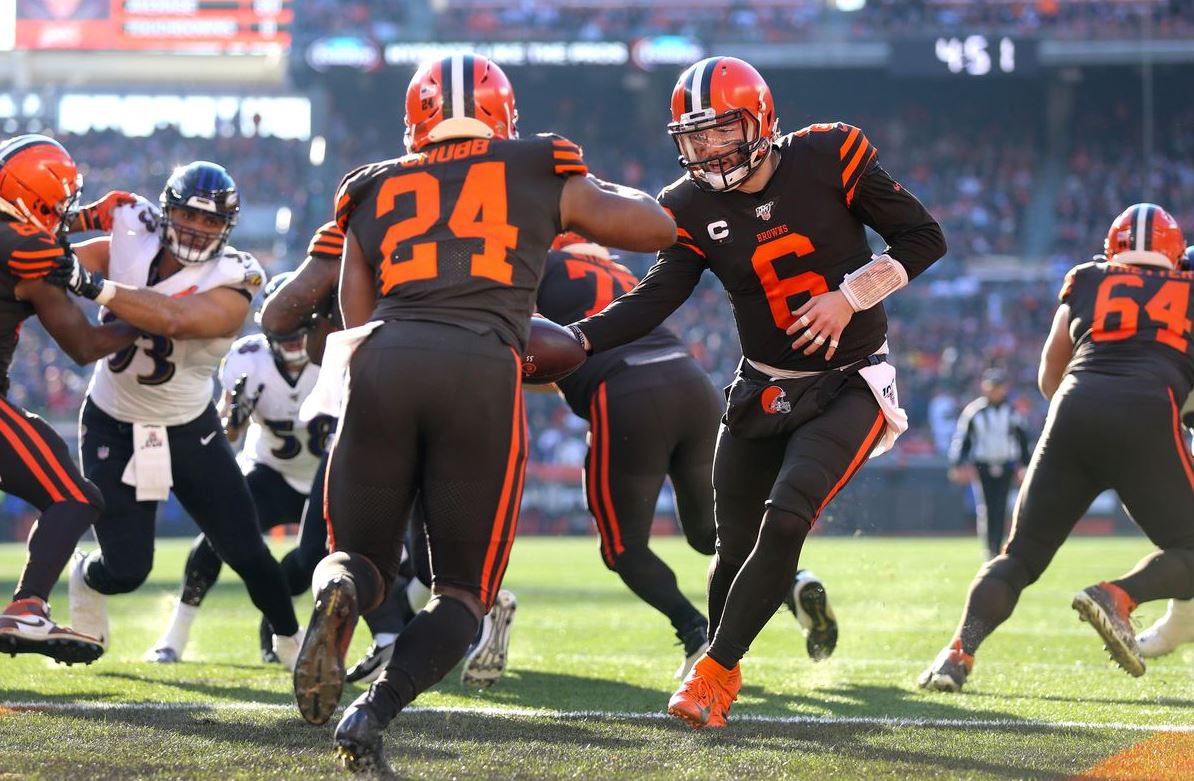 There is no debating that Chubb’s snap share took a hit when Hunt returned in Week 10. His pre Hunt snap share was 77.91%, a healthy workload for an RB1. With Hunt back on the field, this dropped to 64.75%, which certainly is a drop to take note of vs Chubb’s early season workhorse snap %.

Let me put this in context for you, though.

There is another “game script dependent” running back that dominates in the same way that Nick Chubb does. He’s the defending rushing champion in Derrick Henry, and, for the 2019 season held a 66.9% snap share for the Titans. We need to stop overhyping the diminishing workload for Chubb. There are plenty of snaps in Cleveland for both Chubb and Hunt.

Another key area to focus on when looking at Chubb’s upside is the role he plays in the passing game. Chubb did take a back seat in targets once Hunt arrived on the scene, moving from an average of 4 targets a game to 2.25 when Hunt was added to the backfield. Let’s remember though, SFBX isn’t full PPR, so the receiving back premium we are used to changes strategy. With a focus on first downs, where Chubb ranked 5th among running backs in 2019, and an additional 1 point for 10 yards rushing, Chubb jumps from 27th overall in PPR scoring to 11th under SFBX scoring. There is no reason that Chubb cannot crack the Top 10 in SFBX, especially given the changes that happened this offseason in Cleveland.

With a new coaching staff led by former Vikings offensive coordinator Kevin Stefanski, the Cleveland attack looks to be even more run heavy. The Browns ranked 22nd in rush plays per game in 2019. The Vikings offense ranked only behind the Baltimore ravens in passing volume (2nd last in the NFL) and, even with a skilled pass catcher at Stefanski’s disposal in Dalvin Cook, Cook still ranked only 13th in targets among RBs for 2020.

Stefanski’s run heavy attack ranked 4th in the NFL in run plays per game (29.8 per game) which is nearly an additional 5 run plays per game versus what Cleveland ran in 2019. There’s no crystal ball to tell exactly what Stefanski will do, but with Mayfield playing his best under a RPO heavy scheme, an uptick in rushing is a high possibility. And who better to lead that charge than Nick Chubb, the most effective runner with the ball in his hands? Do yourself a favor and put the sharks in your division to the bottom of the bowl by drafting Nick Chubb as the RB1 he will be in SFBX.

Whether you end up drafting any of these players or not, have fun. SFBX unites us all for a good cause while bringing together the global fantasy football community.

With the draft now here, I was only able to touch on three players to look at through a “Fish Bowl” lense. There are many more players that can give you an advantage in SFBX special scoring format. My only recommendation is to make the picks YOU feel good about. That way come the end of the season, SFBX champ or not, you’ll feel good you went with the players that you wanted.

This goes for all fantasy football because we do this to have fun and feel good. Just because someone wrote about it or talked about it doesn’t necessarily mean that they are right. It’s a best case scenario based on the evidence that is provided, and can be used as a way to give new perspectives to your draft strategy. It isn’t set in stone and you can feel free to swim away from the rest of the school, a strategy that can pay big dividends in a large format tournament such as SFBX.

Good luck to everyone today and remember, have fun and don’t forget to donate to #fantasycares.