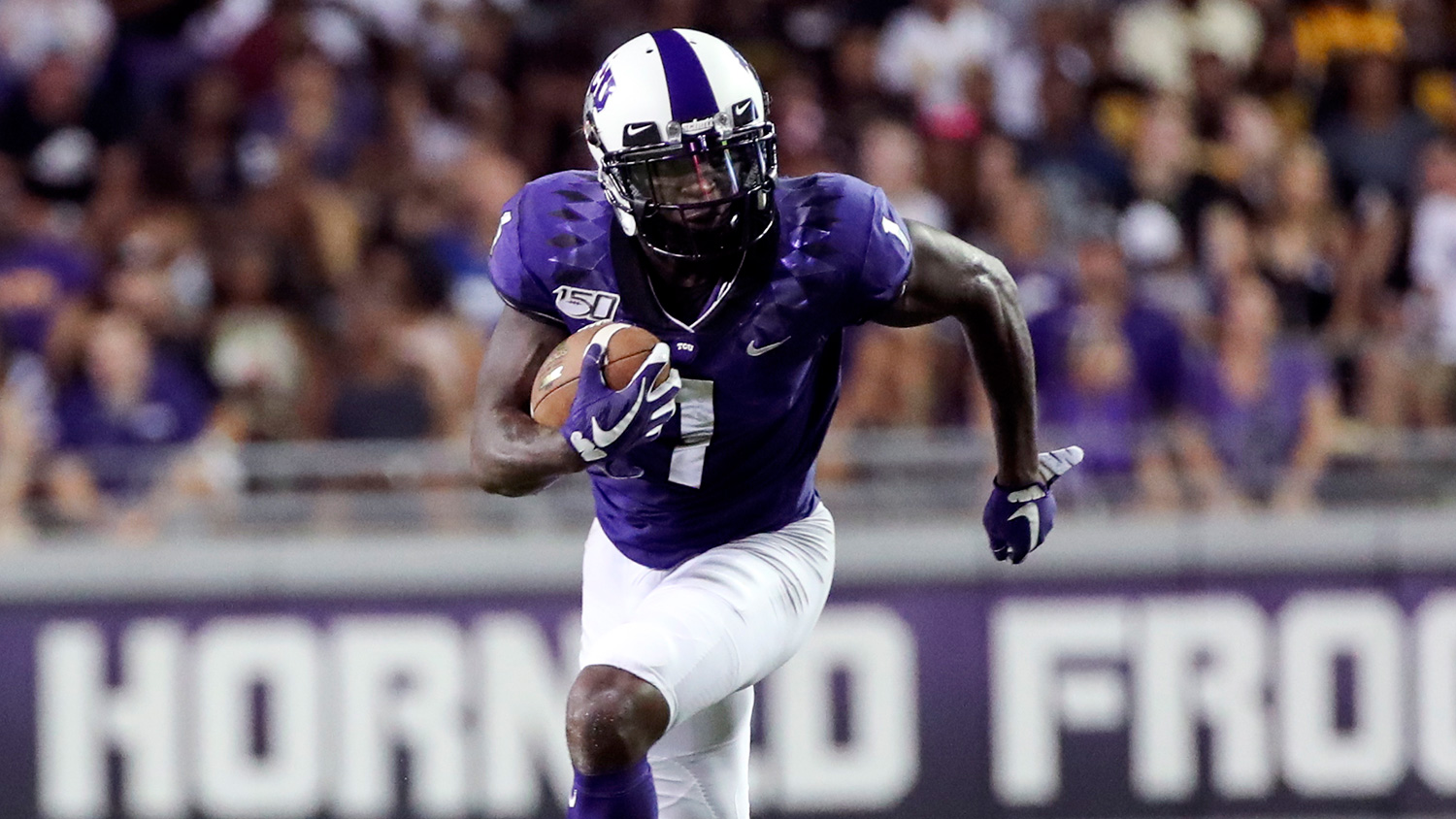 Both players were picked back-to-back NFL draft, are ranked by experts back-to-back, and are also currently going back-to-back in rookie drafts! Currently, Reagor holds a slight edge in each category… but is that correct, and how big is the gap between these two players?

In today’s breakout down I’m going to do something a little different.

Before we get started, I want to establish how close NFL, fantasy analysts, and fantasy drafters are on Jefferson and Reagor. Both players are excellent prospects, JJ Zachariason (@LateRoundQB)  said, “Jeudy, Lamb, Reagor, and Jefferson all rank in the 95th percentile (or better) in my prospect model.” At this point, we know their athleticism and build, we’ve got their production profiles, we’ve evaluated the tape, we’ve broken down their play styles, we’ve analyzed their landing spot, we’ve made our models… and it’s all so very close, with Reagor holding the slight edge in each category.

So, I wanted to explore another way to look at these players… using the wisdom of the crowd. And, the people have spoken.

Let’s kick it off with athletism and build. I was surprised that Reagor was preferred about 3:1 ( 68.9% vs. 31.1%) to Jefferson. Jefferson is 2″ taller and 4 lbs lighter… I wonder if people are scared by his slimmer frame. Additionally, Jefferson had an exceptional combine while Reagor was quick… but failed to meet expectations (there were rumors he would go sub-4.3s). Reagor supposedly ran an unofficial pro-day 40-time under 4.3 second at 197 pounds and improved upon his poor 3-cone and short-shuttle performance at the combine.

Honestly, which one of the profiles below is better?

(Check out each player’s page to see which is which: Reagor and Jefferson) 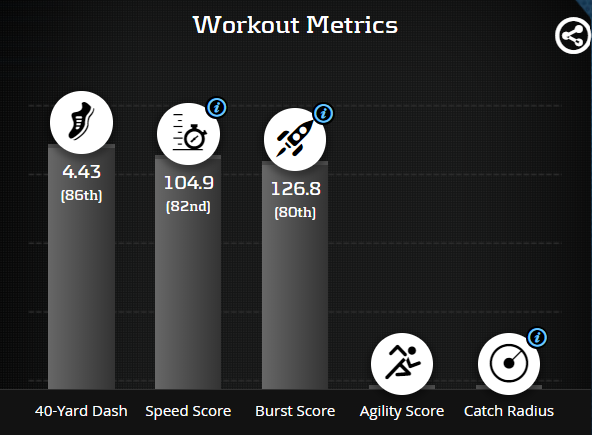 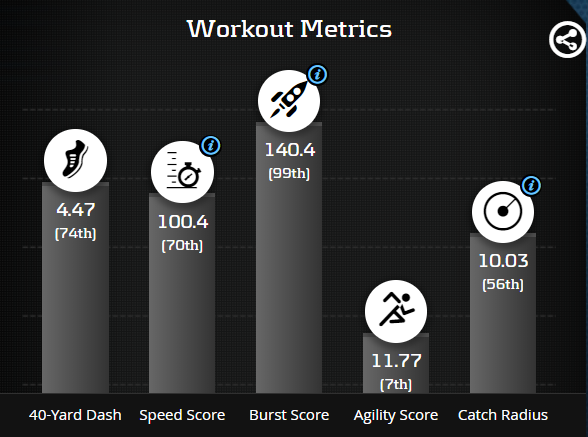 An NFL team asked former TCU WR Jalen Reagor to do a pro day this week and film it. Here is the film that went out: pic.twitter.com/eTJ6sAqWLL

I suspect that the perception difference may be driven by the film. Dane Brugler (per his draft guide), wrote this about Jefferson, “Overall, Jefferson doesn’t possess elite suddenness, but he is a seasoned route runner with the physical ball skills and competitive make-up that translates to the NFL, projecting as a quarterback-friendly target ideally suited in the slot.”

Reagor, on the other hand, was an accomplished track athlete in high school, and that showed on the field – especially on special teams. Dan wrote, “Overall, Reagor must improve the details of his routes and consistency of his catch radius, but he shows the instant juice and explosive athleticism to separate at the NFL level, projecting as a high-ceiling starter with impact potential as a returner.”

For reference, Dan had Jefferson as the #5 WR and Reagor as the #7 WR pre-draft.

Next, let’s look at production where voters gave Jefferson a slight edge (53.8% to 46.2%). And again, that’s pretty interesting to me. Reagor had a better breakout age, special teams production, dominator, and target share. However, per the Breakout Finder app, Jefferson had a better level of competition score (55.6 vs. 39.6) and a teammate score (42.7 vs. 0).

Interestingly, the Eagles General Manager Howie Roseman felt Reagor was the better option… perhaps because of how and where Reagor and Jefferson played. “When I talked to people around the league, we found a lot of west coast offense coaches who were extremely high on Jalen Reagor,” Roseman said. “His skill set and where it fits. When you talk about the west coast offense…for me, I’ve been really fortunate. Coach (Andy) Reid, Coach (Doug) Pederson, two of the best in the last 20 years in the National Football League. Two unbelievable coaches. What they talk about is guys on the outside that separate vertically. The guys on the outside really make a difference. Those tight ends can separate on the intermediate route and running backs can catch the football. I gotta make sure what I’m doing fits that vision. That’s our job. Our job is to fit the vision of the head coach.”

It’s important to note that we’re playing a game about a game, and slot targets are worth more fantasy points than regular targets. Additionally, it’s also critical that a player can win in the situations that the team chooses to deploy them. As such, there is some concern that Jefferson may be forced to play outside, something he didn’t do much in 2019 (he lined up 81 percent of the time in the slot). However, he has played on the outside before. In his sophomore season (where he broke out) he spent 553 of his 697 snaps playing on the outside, and just 133 of his snaps in the slot. Mark Schofield wrote a nice breakdown of how Jefferson performed in those situations. 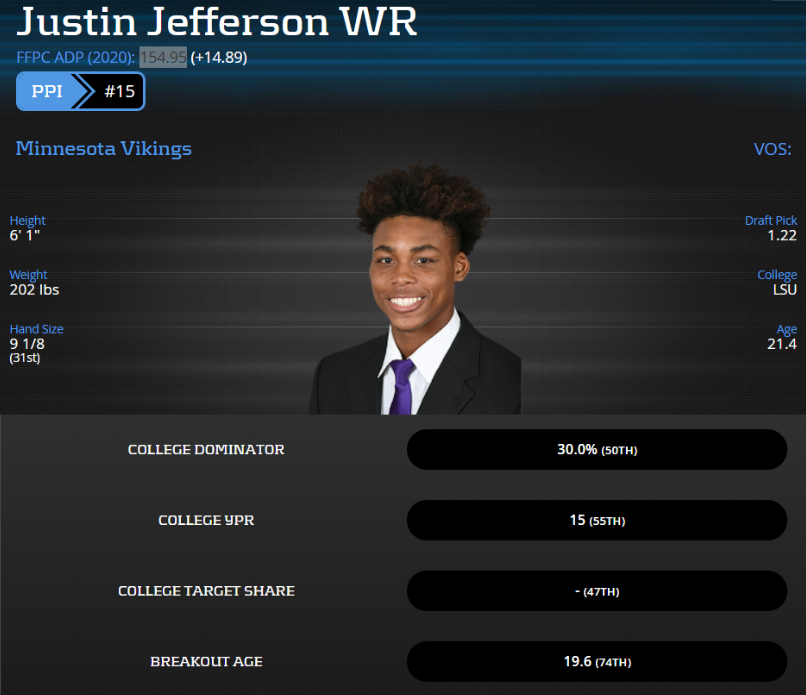 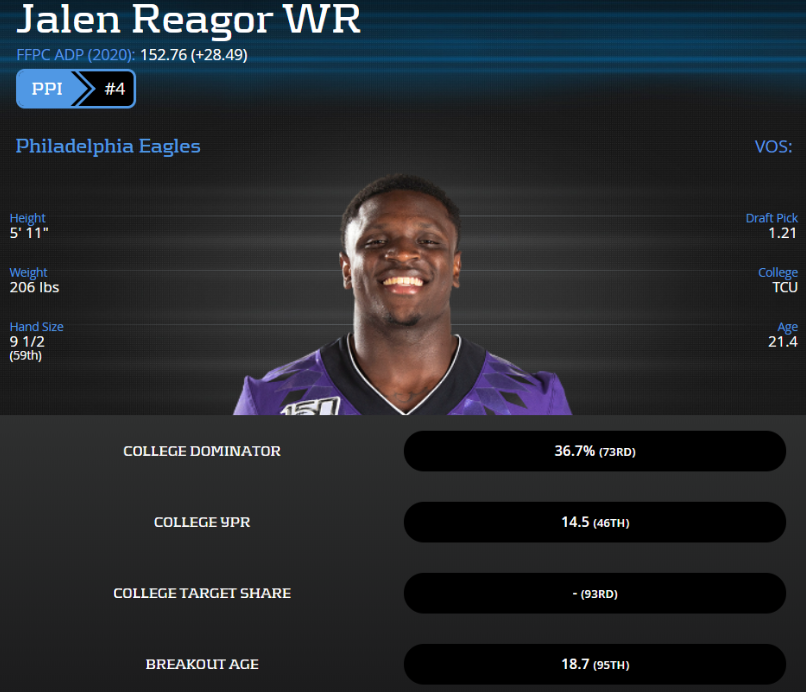 Reagor went to the Eagles at pick 21 and Jefferson went to the Vikings at pick 22. And keeping with the theme, both players are entering situations where they should be able to carve out an immediate role.

Reagor’s competition is Alshon Jeffery, Zach Ertz, Desean Jackson, as well as a second-year player J.J. Arcega-Whiteside and a few late-round rookie speedsters. Meanwhile, Justin Jefferson is slotted in as the clear number 2 option behind an Adam Thielen. Thielen can play outside or in the slot, so I’ll be watching closely to see how they are both deployed to start the year. Will the Vikings pass more with Kevin Stefanski moving to the Browns? Can Wentz say healthy?

Things can change fast, but 71.5% of voters thought Reagor landed in a better situation.

This was the most lopsided poll of the group, a whopping 87.6% (~8 in 9) players though Reagor had a higher ceiling than Jefferson.

Fantasy layers are clearly more concerned about Reagor busting, as 3 out of 4 voters thought he was the biggest risk.

This isn’t particularly surprising to me, because it’s easy to make some compelling comparisons to their new NFL teammates. Jalen Reagor is a decent comp to DeSean Jackson, while Justin Jefferson is eerily similar to Adam Thielen. Both players have provided elite production in the past but were polar opposites when it comes to perceived ceiling-floor.

Sticking with these comps, it makes sense that we’d be more comfortable giving Jefferson a Theilen-level ceiling while being rightly worried about DeSean Jackson’s hit-and-miss track record when we think of Reagor. Do Reagor’s extra 20-30 pounds alleviate some of the injury concerns? I think so.

Even though voters preferred Reagor in almost every category, why are they still so close? I suspect it had something to do with risk-aversion. That is to say, fantasy drafters are disproportionally discounting Reagor because of his perceived risk.

Before this analysis, I kept flipping Jefferson and Reagor in my own rookie ranks. Now, I’m firmly in the Reagor camp… at least, for fantasy football. If I had a late pick in the 1st round of my rookie draft, and I’m forced to choose, I would pick (and have picked) Reagor because I see his prospect profile as a touch better than Jefferson’s across the board – especially in these key areas:

Who would you choose? Let me know @rbkeeney on Twitter.