Pros vs. Joes is an annual competition put together by the FFPC and Darren Armani of FantasyMojo.com. The format matches fantasy football industry professionals such as Sigmund Bloom of Football Guys, Evan Silva of Establish The Run, John Paulsen of 4for4, Rich Hribar of Sharp Football, The Podfather, Matt Kelley, of PlayerProfiler, and many more analysts that are very well known. The Joes participating are often some of the best high stakes players around.

The Pros vs. Joes format for this season is Slim Best Ball — 18-man rosters, no kickers, and no defenses. FFPC rules and starting positions are used as well. Each team has 1QB, 2 RBs, 2 WRs, 1 TE, and 2 flexes. PPR scoring is used with TE premium, meaning a tight end reception is worth 1.5 points. Each division winner gets an entry to the 2021 FFPC Main Event (a $1,900 value) and bragging rights. Second place in this tournament means nothing. This competition is all about one winner.

This year I had the pleasure of participating as one of the Joes. My league featured sharp industry minds such as Curtis Patrick of Rotoviz, Ryan McDowell of DLF, Jake Ciely of The Athletic and Eliot Crist of FTN. If that wasn’t difficult enough, my Joe league mates were beyond loaded with some very successful and well-known high stakes players: Chris Birchby, Matthew Lively, David Hubbard, and Jason Aberli. These guys have easily cleared high-six figures in combined fantasy football winnings.

FantasyMojo released their odds for my league and I was in the bottom three, at 15-1. The odds were definitely motivating. I knew my preparation needed to be well thought out to beat these odds and give myself a shot at winning. 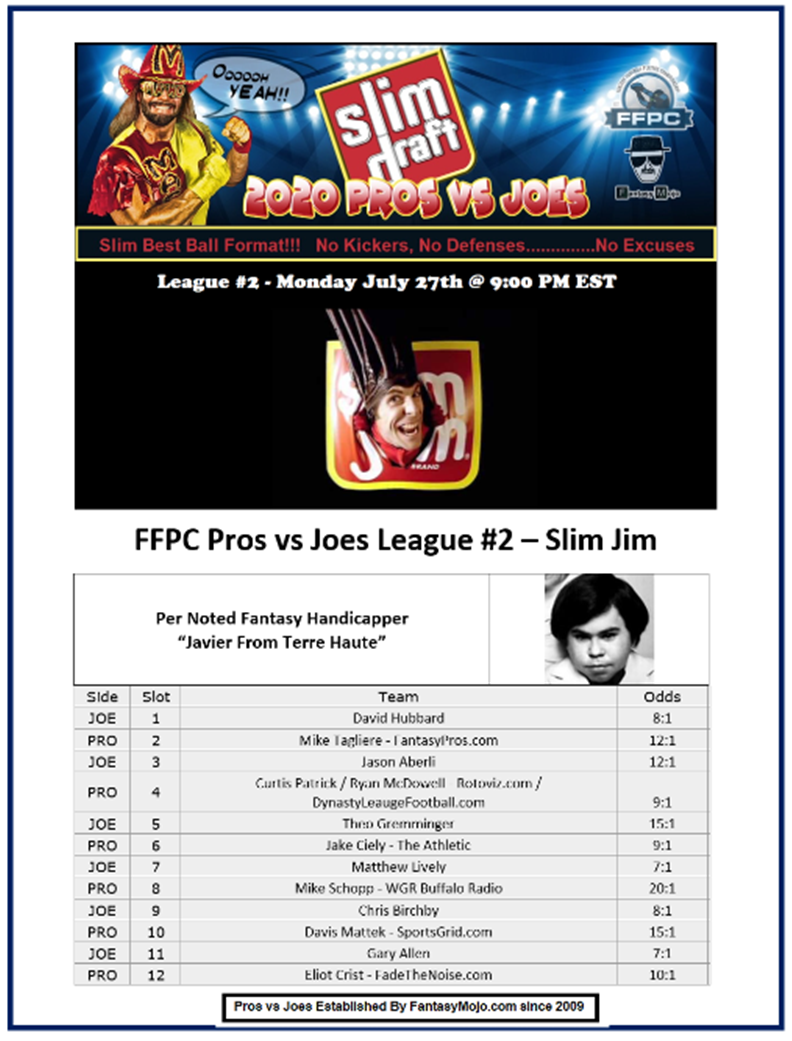 My plan was to focus on roster construction and then form a plan for which specific players I would target. In traditional Best Ball you can accumulate depth at every spot. Slim Best Ball creates hard choices in terms of roster allocation. I consulted with a few fantasy gamers I highly respect and I was then able to formulate my plan: Draft 2.5 QBs, 2.5 TEs, 6.5 RBs and 6.5 WRs. For quarterback and tight end, I would let draft capital dictate how many spots I would use. As a basic rule, If I used a higher pick (first 8 rounds) on a quarterback, I would only only roster two. If I waited until later, I would roster three. After formulating this plan, I was then able to lock in on specific players for each round.

I drew the fifth slot in our draft order. For the first round my focus would be on running back. A great tight end such as Travis Kelce or a top wide receiver like Michael Thomas are very enticing at No. 5, but a strong runner with pass-catching ability is invaluable. Alvin Kamara and Dalvin Cook were my two targets here. Cook’s holdout concerns would not deter me from taking a player of his talent and potential outcome.

For the second round, ideally I would select another high-volume RB, but I would be willing to take the value of an elite wide receiver. I knew there would be about zero chance of George Kittle falling this late in the second round of an FFPC draft, but he would certainly be an auto pick if he were to be available. Basically, in the second round, I would need to be flexible.

For the third round, my focus was on two players: Mark Andrews and Zach Ertz. Both should see high volume and lead their respective teams in targets. Getting one of these two tight ends in the third would put my team in a great position to have both a high weekly floor and ceiling at tight end.

I wanted to treat the fourth round much like the second round with flexibility and max value. I also wanted to get someone with tremendous upside here that had the potential to exceed their draft capital.

I felt comfortable with my plan and I was ready to attack the draft.

The Curtis Patrick/Ryan McDowell team went with Kamara. This made my choice here very easy. Cook it is.

Jake Ciely went with Nick Chubb while Josh Jacobs went earlier in round 2. Keep in mind, this was before Damien Williams opted out of the season. While Clyde Edwards Helaire was enticing, I went with Ekeler. I love the early-season schedule for Ekeler and his receiving volume provides a great floor.

Patrick/McDowell selected Andrews in the second round and I stuck to my pre-draft plan and took Ertz here. Passing on Lamar Jackson, Patrick Mahomes, DJ Moore and JuJu Smith-Schuster wasn’t easy, but after Ertz, there was a big-time tier drop at tight end.

I followed my plan and was able to get a player I love, who also has tremendous upside. A mini-run of RBs opened the 4th round when Todd Gurley, David Johnson, Melvin Gordon and Chris Carson were all taken. I was thrilled to get Jonathan Taylor at this point in the draft. I fully expect him to take over the starting job and produce like an RB1. The Best Ball format makes Taylor even more appealing. If he is slow out of the gate and takes a few games to get high volume, I already have Cook/Ekeler. This was one of my favorite picks I made in the entire draft.

After a RB/RB/TE/RB start, my focus turned to wide receiver. I wanted Terry McLaurin, but the Patrick/McDowell team sniped him one pick prior. I was pleased to get the weekly floor of Robert Woods. I also considered DJ Chark, who went a few picks later to Davis Mattek.

Stefon Diggs has always been a favorite of mine. A lot of people are scared off by his usage concerns in Buffalo, but a player of his talent level at this point in the draft was an easy pick for me. Buffalo did not give up four picks (including a first rounder) for Diggs to blend in. He will be featured. 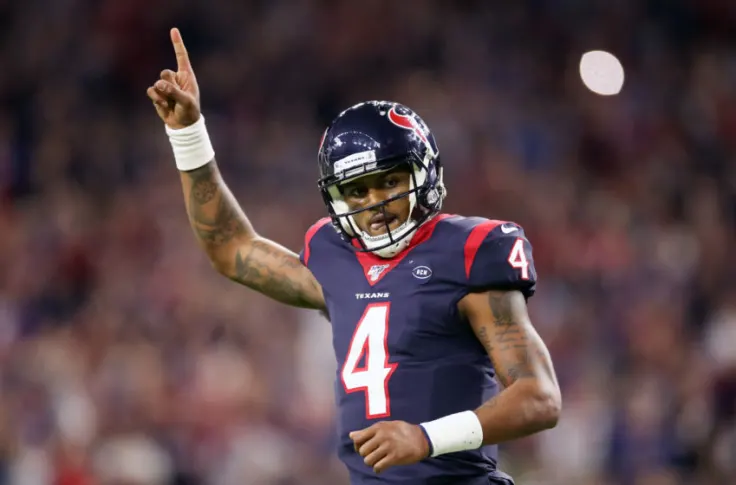 After Jackson and Mahomes went in the third round, we did not see another QB taken until Patrick/McDowell drafted Kyler Murray in the 6th round. Mike Tagliere then selected Dak Prescott with the 74th pick. The seventh round was not my ideal QB round, but at this point I felt a QB run coming. I chose Deshaun Watson over Russell Wilson (who went three picks later). With this pick, my 2.5-QB plan went down to two. I knew I would be waiting on a late quarterback as my QB2.

I was happy to get Marvin Jones here as my WR3. His scoring-per-game was comparable to Kenny Golladay last season. The wide receiver position was quickly drying up and Jones was an easy pick for me. He is a great value in any format this year, especially in the 8th round.

Some people believe in handcuffing their own running back. Some do not. Reasonable arguments can be made for both sides. I view Alexander Mattison as a very high-end handcuff and Round 9 was not a reach.

Like in most FFPC drafts, tight ends were highly drafted in rounds 7-9. Round 7 saw Hayden Hurst, Tyler Higbee and Jared Cook go off the board. Round 8 was even TE-heavier as Jonnu Smith, Noah Fant, Rob Gronkowski, TJ Hockenson and Mike Gesicki were all taken. Blake Jarwin, Dallas Goedert and Austin Hooper all went in the 9th round. Chris Herndon and Ian Thomas were my choices here. I love Thomas’ upside, but I love Herndon even more. He should see a high volume of targets this year, now that he’s healthy.

I was thrilled to get Henry Ruggs here. I love his value in all formats. I would have taken him a round earlier if the tight end spot was not drying up. A smash value as my WR4.

N’Keal Harry is another young receiver I am targeting this season. This was the first wide receiver I drafted in the 2019 class. In round 12, I was swinging for upside, and this was not a hard pick to make. 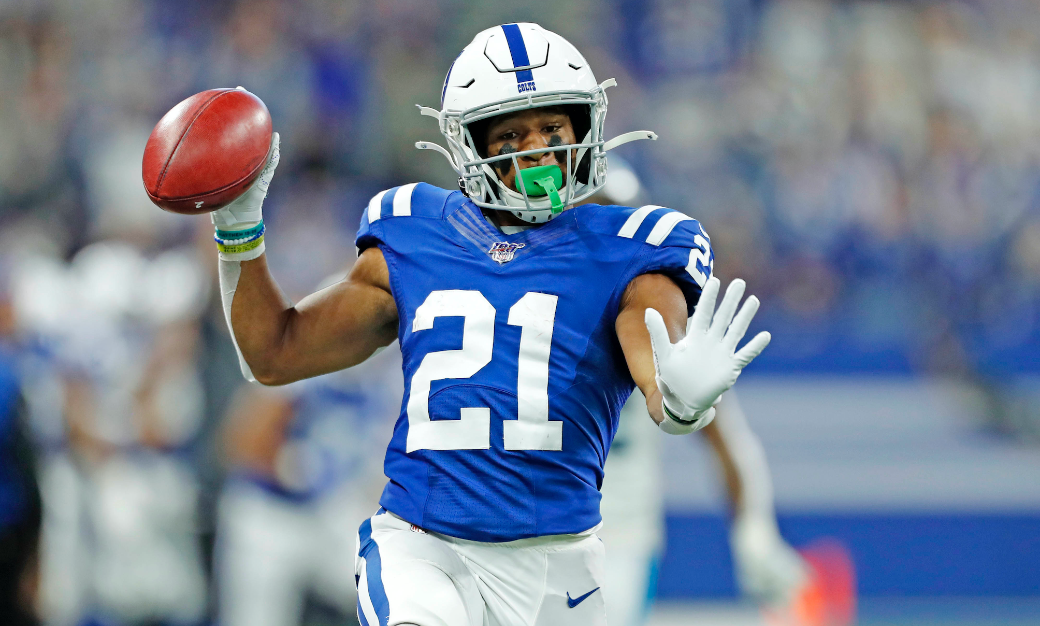 After selecting Nyheim Hines here, I now had two out of the three Colts running backs. I like Hines to balance out my Taylor pick in Round 4. The weeks that Taylor and Marlon Mack do not produce will most likely result in negative game scripts. Here, I would have exposure to the high-reception games of Hines.

This was a similar pick to Hines. I took Ruggs and now balanced him with fellow Raider Hunter Renfrow. This is not a player who will have massive weeks, but more of a floor play who should have a few weeks that help the build of my team.

A longtime favorite of best ball drafters, Robby Anderson should be Carolina’s deep threat this season. He was a good value in this round and should have a few usable weeks.

By this round, the quarterback position had quickly dried up. I was pleased to get Teddy Bridgewater here. He should see a lot of negative game scripts with Carolina’s putrid defense.

I considered two names here: Ryquell Armstead and Anthony McFarland. If Leonard Fournette misses any time, Armstead would be usable.

I liked this pick a lot. There were trade rumors of David Njoku being moved from Cleveland at the time of the draft. The two sides seem to have reconciled, but even as the TE2 to Hooper, Njoku has a chance to produce as the Browns should be in 12 personnel often this season.

I appreciated the opportunity and challenge of participating in this draft. It was a lot of fun. I’m hoping I or a fellow Joe wins the league and the entire Pros vs. Joes tournament.