Talent vs. Price: The Best Value Running Backs in Devy

This article is an extension of the ideas I wrote about previously in The Best Value Running Backs in Dynasty. The thought processes behind each idea are much the same. In long-term formats like dynasty and devy, player talent matters significantly more than it does in redraft, and identifying and exploiting the disconnect between players who appear to be talented and players who are drafted highly in these formats can be a net positive for your rosters when exceuted effectively.

To that end, my running back model seeks to quantify talent in relation to all players in a position group. I want to know which running backs produce, run efficiently, contribute well in the passing game, and earn and handle heavy work the best — all relative to each other, all stripped down to player-isolated impacts — as much as I can by arming the evaluation with context.

Given all that, I generate scores in several areas of player performance that combine to form an overall composite score representing a player’s talent (and by “talent,” which is a fairly nebulous term, I really mean something like “level of situation-agnostic skillset that is conducive to scoring fantasy points”). I then use those scores to identify players who are values in relation to their ADP in devy leagues. If you are a substantially more-talented player than the other guys being selected near you, I’m likely interested. Guys are listed below in order of ADP (from cheapest to most expensive). 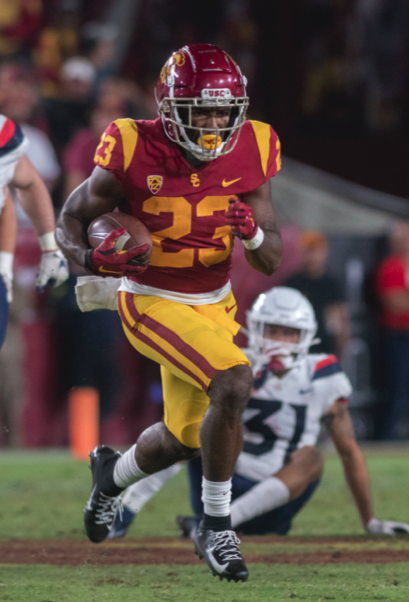 An investment in Kenan Christon is not a tough sell. He runs a 10.26 in the 100 meter dash. As a true freshman last season he posted per-target and per-receptions numbers in the 83rd and 77th percentiles, respectively. He also ran wild in the open field, converting almost half of his trips to the secondary into breakaway runs of 20 or more yards (44.44%, a 95th-percentile mark). And he is generally free in devy drafts.

He’s also skinny (5’10”, 185) and has only played in seven college games, but the holes in his profile matter far less than the rocket ship emojis in other areas given the price of admission. There are tantalizing tools here with half a season of performance that suggests they might be legit, so hop on the train now while they’re still just giving tickets away.

There are 69 running backs listed on Devy Watch’s ADP page and #68 is a player who posted a 30.2% dominator rating as a true freshman last season, the 12th-highest first-year mark among players drafted since 2007 (and the third-highest mark since ’07 among guys from Group of 5 schools).

UTSA’s Sincere McCormick is that man, and in addition to market-share dominance, he was also efficient as a ball carrier and prolific as a receiver, making hay in the open field (his Breakaway Conversion Rate of 46.15% is in the 96th percentile) en route to outdoing his teammates by 1.16 yards per carry (75th percentile), while also hauling in 24 passes. 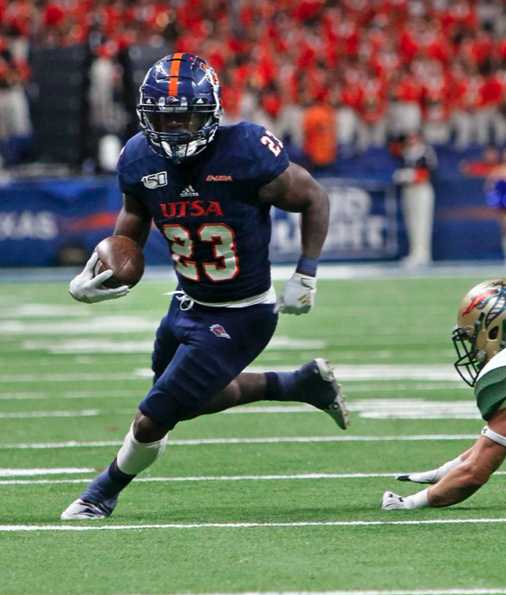 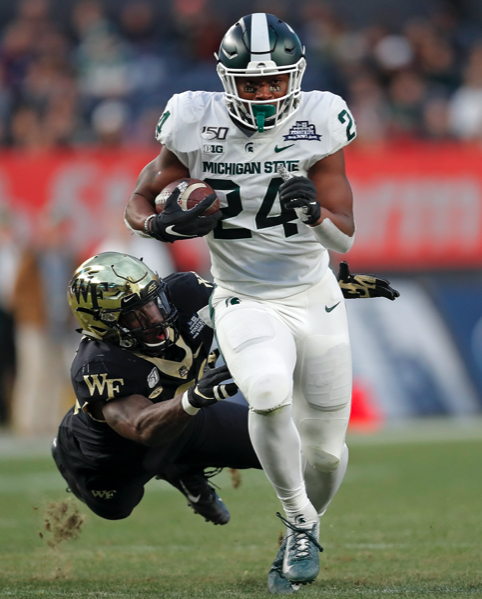 If I told you that a young, #24 jersey-wearing running back with workhorse size and limited receiving chops at a blue blood program in the state of Michigan emerged as a star in his first year as a full-time player in the Big Ten last season, you’d probably tell me how excited you are about Zach Charbonnet as one of the top-end talents in the class of 2022.

In that case, I would tell you about the kid in East Lansing who ran for 262 more yards, was significantly more efficient relative to his teammates (1.76 YPC+ vs. 0.17), was worlds better in the open field (45.83% breakaway conversion rate vs. 14.29%), and caught nearly twice as many passes as Charbonnet, but is going more than 90 picks later than him in devy drafts: Elijah Collins is Arbitragonnet!

He is currently small (listed at 5’10, 190), but he belongs to a population of players who have historically weighed in at the Combine at least 205 pounds 87.1% of the time. He’s an all-purpose threat in the same vein as Jerrion Ealy (who could easily choose baseball over ever playing in the NFL) and Pooka Williams (who weighs 20 pounds less than Goodson), but he goes 76 and 38 picks, respectively, later than them in devy drafts. Wake up; Thor Nystrom has. 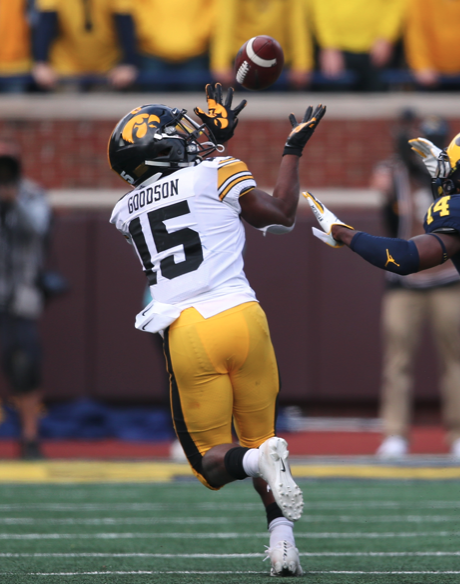 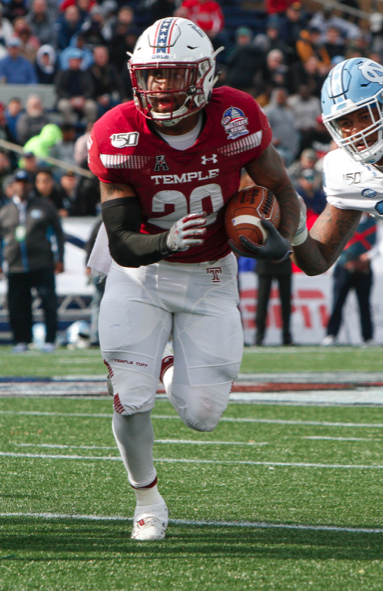 Temple Owl runing back Re’Mahn Davis is 64 arbitrary yards (that’s how close he was to the magical 1,000 mark on the ground last season) and an offseason of focusing on being a great receiver (an area in which he already contributed 15 receptions and a 71st-percentile yards per target figure of 7.2 as a true freshman) away from being a mainstream pick as the next small-school running back with “sneaky” star potential at the next level.

I’m hopping on the train now, because I’ve seen enough; dude has a stout, workhorse frame at 5’9″ and 210 pounds, and was one of the most impressive first-year runners in all of college football in 2019. He outperformed his backfield mates by 0.56 yards per carry and by 6.30% in 10+ yard run rate (marks in the 52nd and 89th percentiles, respectively). Davis is as good a bet to be the next Aaron Jones or Ahmad Bradshaw as anyone.

I’ve been a bit slow to join the Journey Brown hive due to his subdued production profile and as yet unrealized potential as a receiver, but the more I go over his credentials, the more I think fading him is a losing proposition.

We can’t really knock Brown for not breaking out until year three, as he redshirted in 2017 while Saquon Barkley ripped through the Big Ten with Miles Sanders giving breathers. And then it was Sanders’ turn to carry the load in 2018. Brown’s first shot at solid P.T. came last year, and he showed up ready, posting marks in the 85th, 81st, and 92nd percentiles, respectively, in rushing efficiency metrics YPC+, Chunk Rate+, and Breakaway Conversion Rate.

Those numbers suggest Brown is one of the best pure runners in the entire country, and with prototype size at 5’11” and 216 pounds, to go with slickness in the passing game that sharp tape analysts insist portends greater things than the average efficiency and involvement his numbers belie to date, I’m very close to being all in. 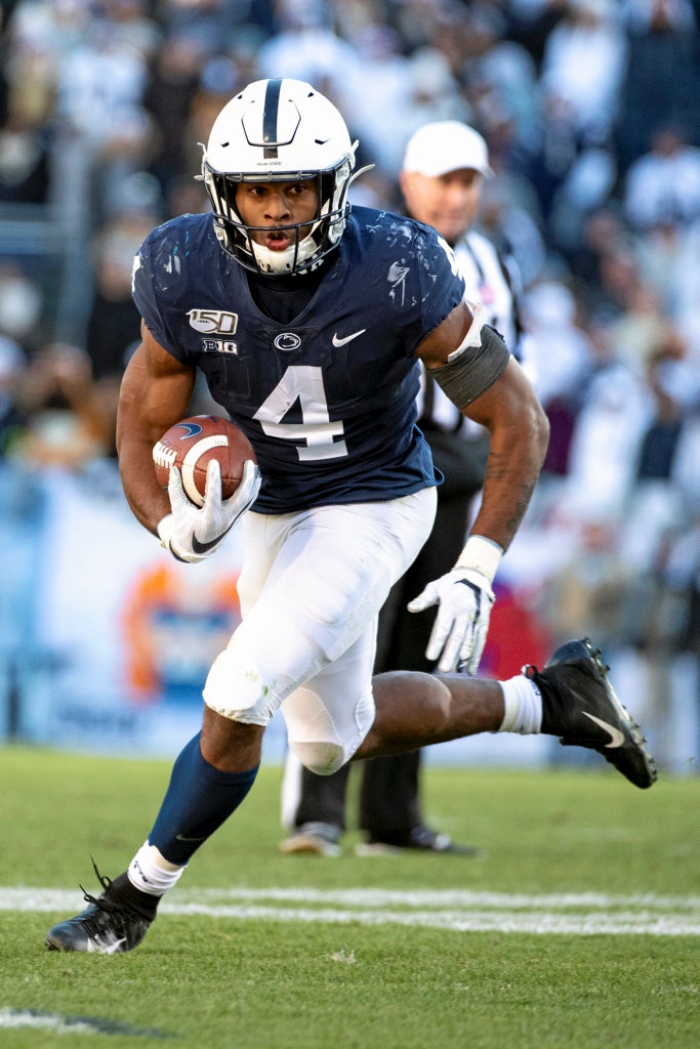 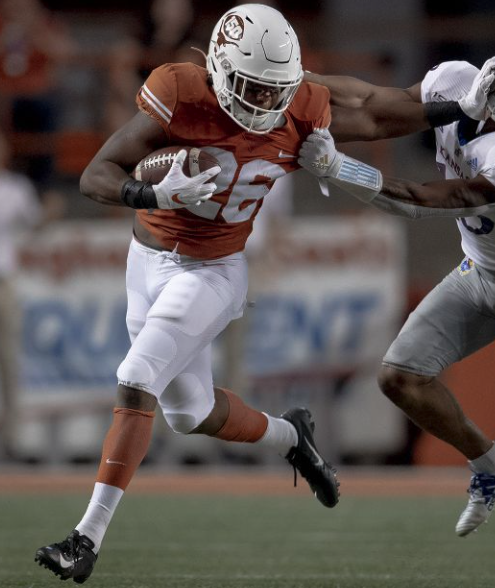 Texas’ Keaontay Ingram is another running back with a subpar production resume, but there is absolutely nothing about his skill set in a vacuum that suggests he’s anything but a box-checking future stud.

He’s huge (6’0″ and 235 pounds), he’s prolific in the passing game (56 receptions through two season), and he’s a strong value-add in the running game (1.44 YPC+ and 2.16% Chunk Rate+). In this piece from earlier in the spring, I likened Ingram’s game to Alvin Kamara‘s, and I do still think they do similar things, but if he’s gonna be 20-25 pounds heavier than Kamara was coming out of Tennessee, we might need to pivot to Steven Jackson or Ronnie Brown comps. If you like Najee Harris, you have to be interested in Ingram.

The idea that there are ten better running backs in college football than Kenny Gainwell is almost laughable. The dude had over 50 receptions and 600 receiving yards last season, and, at a program that has churned out NFL running backs like clockwork for the past few years, outperformed his backfield teammates in YPC and 10+ yard run rate at clips that rank in the 94th and 80th percentiles, respectively, while also turning 38.46% of his trips into the secondary into breakaway runs of 20+ yards, an 82nd-percentile display of open field running.

He’s simply one of the best offensive weapons in the entire country, and assuming he can add 10 or so pounds to his frame by the time he turns pro, there’s no excuse for ranking a guy with a Jamaal Charles-skill set behind cookie cutter blah-backs like Kylin Hill. 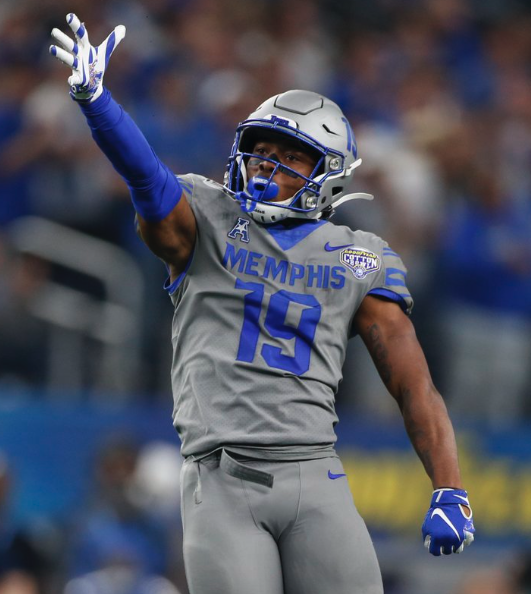